Jill and Jim in John O’Groats in August 2017
By Lucy Watherston
Wednesday, 13 February 2019

As we all know, it takes two to tandem, and in this tale of bike love, two Cycling UK members show how cycling together helped them build a strong marriage of over 30 years.

Jill and Jim Borcherds prove that cycling can really be the start of something special. The pair first met in 1988 during an Easter cycling weekend organised by Cambridge CTC – a Cycling UK Member Group.

Both were unknowingly members of the same Cambridge group but attended different social rides at the time. Jill was 24 and Jim 26.

The pair attended a cycling trip in the Peak District and although it was the first moment they laid eyes on each other they didn’t get much opportunity to know each other.

A few weeks later, for the next cycling weekend at the May Bank Holiday, Greta, a stalwart of the CTC (now Cycling UK) group suggested they travel together. During the car journey, with two bikes in the back of Jill’s mini metro, they discovered they had lots in common and the rest as they say is history.

Three weeks later, Jill set off on a long planned cycling trip from Land’s End to John o’ Groats and invited Jim to go along too for the first week. 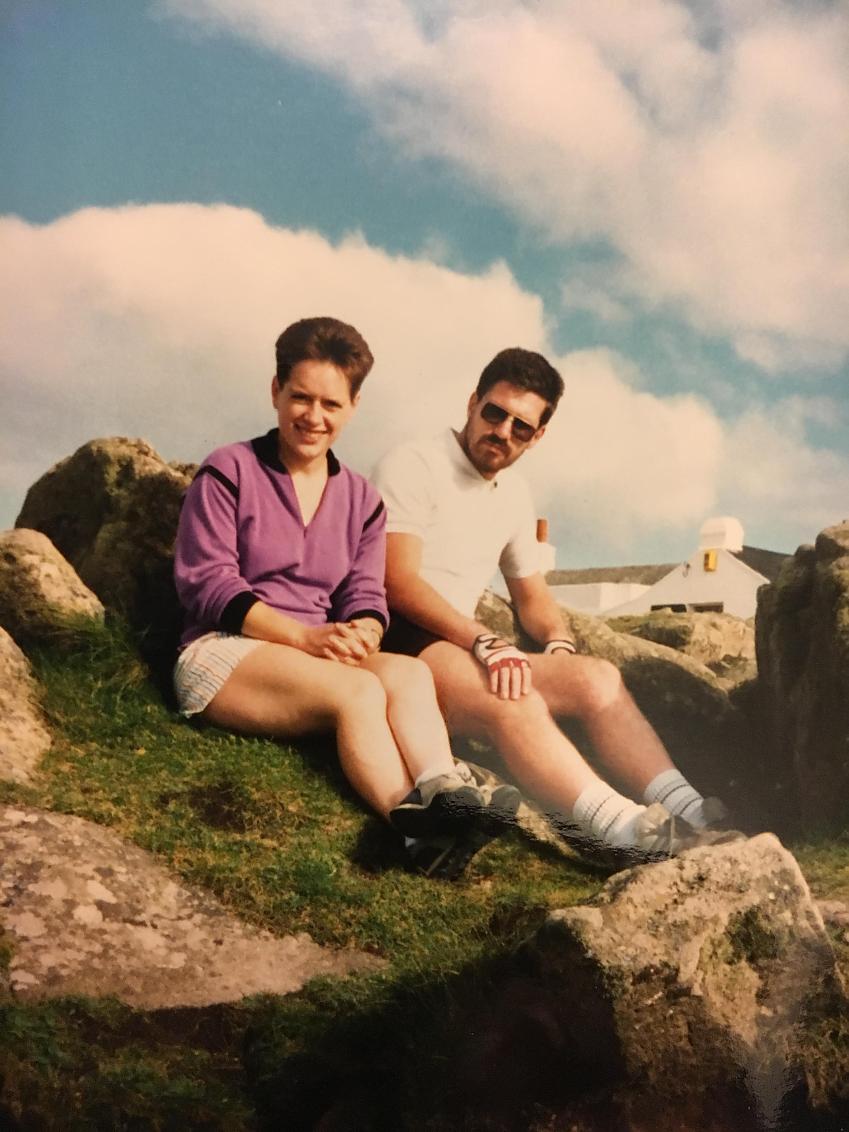 Jill said “We had a lovely photo at the start of the ride and really enjoyed the trip. However, Jim had to leave at Carlisle because he was a teacher and due back at school, so I completed the rest of the journey on my own.

“I finished the ride with a fellow Cycling UK member, John from Tiverton, who we met along the way, somewhere between Manchester and Liverpool. For years Jim never lived down the fact that he didn’t complete the ride with me.”

However, after a few decades of teasing, 29 years later in 2017 the couple finally completed the route together..

The pair continued to ride with the group in Cambridge until they married in 1989 and moved to Stevenage – a perfect town for the cyclists to set up home. When someone suggested they should get a tandem, Jim insisted they should wait until their 25th wedding anniversary.

Reminded of this promise every year, the tandem was duly bought and in 2014 the pair headed to Durham by tandem instead of the train they took on their honeymoon. 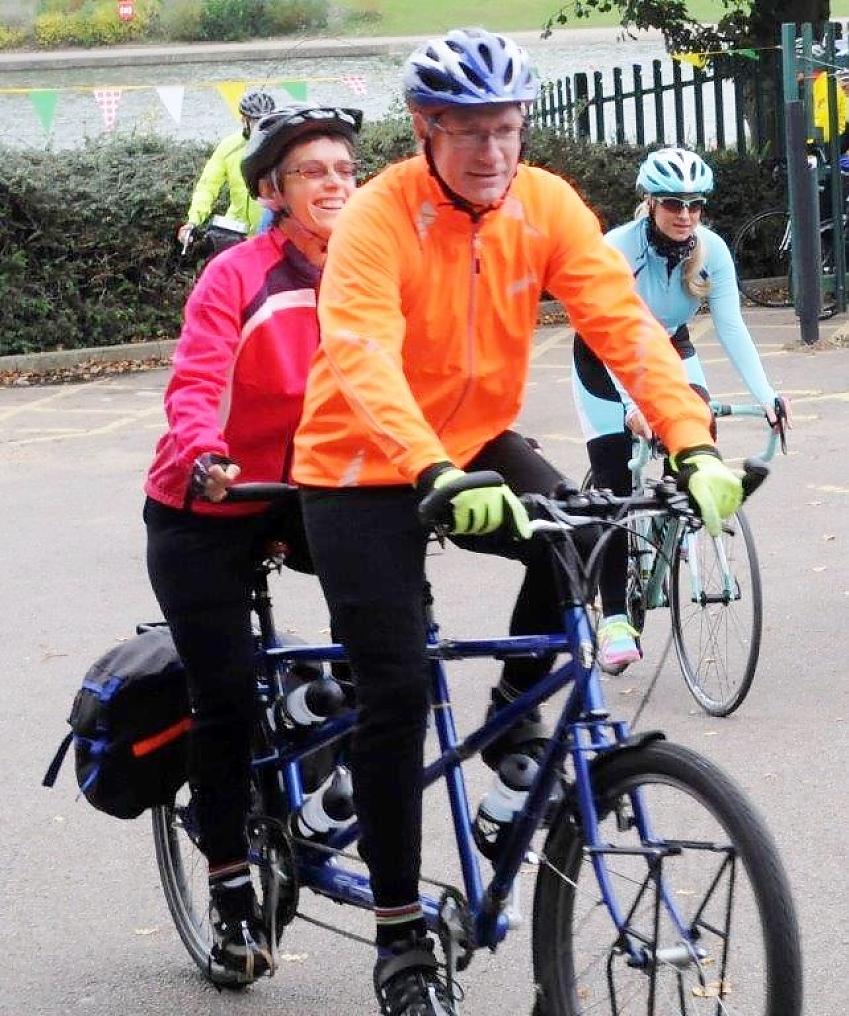 Now the pair still live in Stevenage, having brought up their family of three children.

Jill said, “Stevenage is the best place in the UK to cycle – that’s the reason we moved there. There are 48km of segregated cycleways, and we can cycle everywhere.

“We have three children (two boys and a girl) and have brought them up to enjoy walking and cycling. Our two boys are in their mid-twenties, 23 and 25, and have never learnt to drive. They cycle or walk everywhere.

“My daughter, although she has learnt to drive, cycles to work at a car factory every day."

If there's been any doubt about the role cycling plays in the Borcherds household, Jill soon dispels that.

“Cycling has always been the thing we’ve done together and about 15 years ago we started riding regularly with Cycling UK Stevenage," she said. “When the children were young we’d get a babysitter, so we could go on Wednesday evening rides together.

“Cycling has kept us both healthy, Jim still cycles to work on the same bike he did when we first met."

When you’re cycling... you share the best and the worst, a bit like life really, and you have that essential respect for each other.

As you would imagine for this family, their cycling isn't just confined to their home roads!

“We always take bikes on holiday, a holiday without cycling is not a holiday in my opinion," Jill enthuses. "We’ve recently been to the Alps in France and all over the UK on our bikes. Jim is very good company to cycle with. Over the years we’ve developed special hand signals that mean different things like, good view, pretty flowers, cute animal, dead animal (warning!) and so on."

Cycling UK asked Jill what the's special ingredient to their 30 years of happy marriage, and we weren't surprised by her response.

“A shared interest, if you meet someone with the same passion, is the secret to a happy marriage," Jill said. "When you’re cycling, especially on an extended tour, you share the best and the worst, a bit like life really, and you have that essential respect for each other.

“Jim always beats me to the top of a hill but he has the good sense to wait for me at the top so we can enjoy the view together.”

Jill and Jim are also active volunteers with their local cycling group Cycling UK Stevenage. Together, they helped organise last year's Start of Summertime Specials Challenge Rides and are pictured below presenting a map funded by the rides to the Stevenage Cycling Hub. 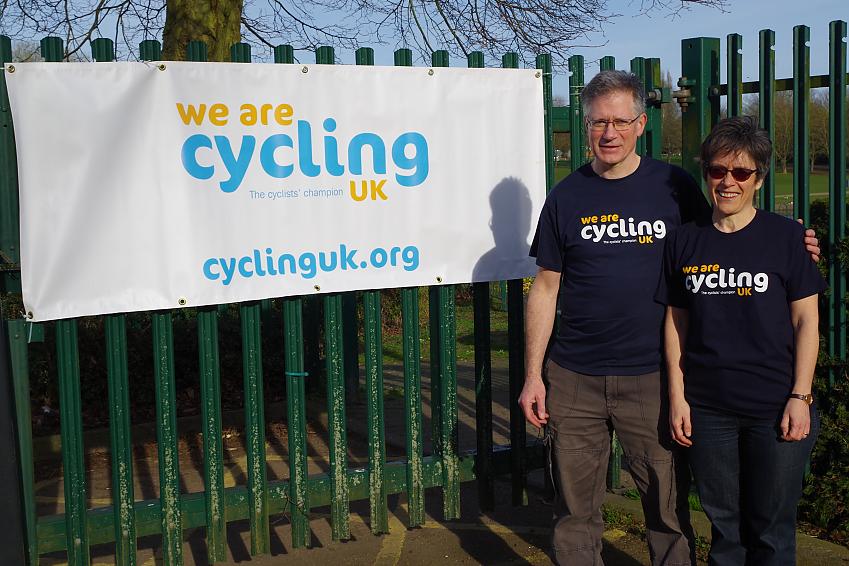 Jill and Jim in volunteering mode

Whether you're looking for love or just looking for friendly folk to cycle with, then why not go for a ride with your local Cycling UK group?

Do couples who cycle together stay together? View

No longer on a bicycle made for two... after 80 years View