Where can I cycle off-road? (England and Wales)

Where can I cycle off-road? (England and Wales)

In England and Wales we have a comprehensive network of routes and trails available to cyclists to get you out into the countryside. Here we clarify where you can legally ride off-road

Where can I ride?

In England and Wales, cyclists have a legal right to ride on some public paths, but not others (see below).

There are a variety of other off-road access opportunities, such as disused railway tracks (often highlighted as part of the national cycle network), country parks and canal towpaths, most of which are ideal for beginners and family friendly cycling. Many (but not all) of these routes are now shown on Ordnance Survey maps.

There are also a number of promoted mountain biking trails, with organisations like Forestry England and Natural Resources Wales having developed specialist mountain bike trail centres with a range of trails with something suitable for all abilities, graded from easy ‘green’ trails through to more extreme ‘black’ mountain biking trails, which should only be undertaken by experienced off-road riders.

Access legislation is currently being reviewed in Wales - this guidance represents the current position and will be updated to reflect any changes.

Wherever you choose to ride - ride responsibly, follow the Countryside Code (for England or Wales), and above all, enjoy yourself. 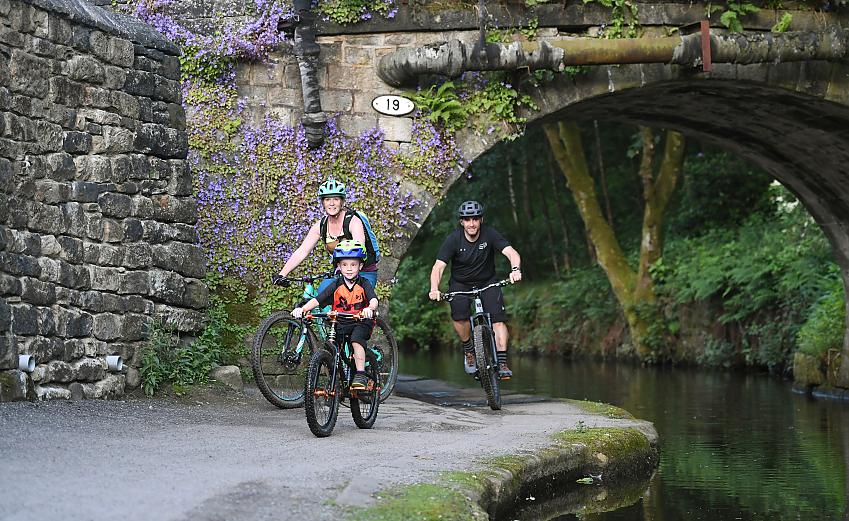 Public access is quite a complex issue, so we'll give a brief explanation first followed by a more detailed one.

You have a right to ride a horse or a bike on any bridleway, restricted byway or byway open to all traffic. You can also ride a bike on any cycle track, and on routes shown on an Ordnance Survey map as an ‘other route with public access’. 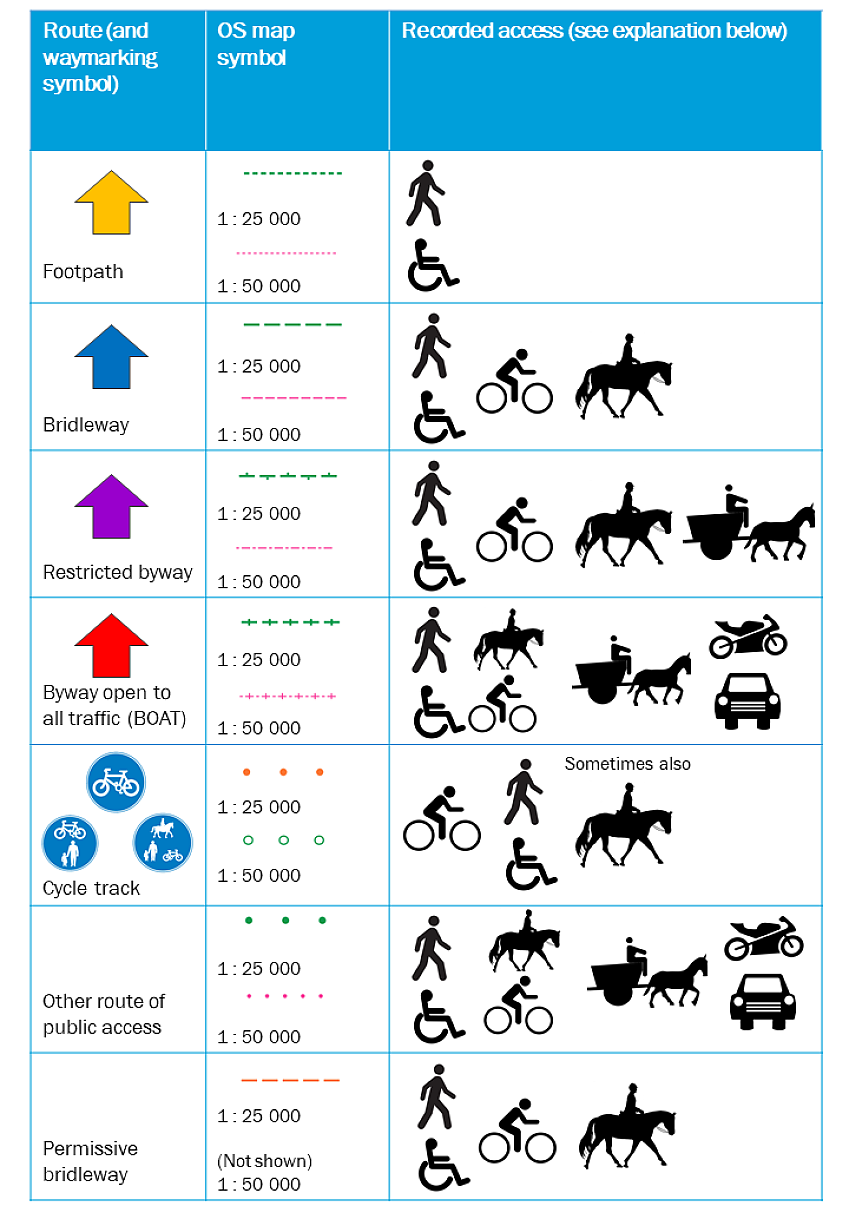 A recorded right of way on foot (see extra details section below).

A recorded right of way on foot, on horseback and/or leading a horse, and on a bicycle (introduced by the Countryside Act 1968). Cyclists must give way to walkers and horse riders if encountered.

A recorded right of way on foot, horseback and/or leading a horse, on a bike, or on any other non-mechanically propelled vehicle (such as a pony and trap).

Byway open to all traffic (BOAT)

A recorded right of way on foot, horseback and/or leading a horse, on a bike, or with any other vehicle including cars and motorbikes. 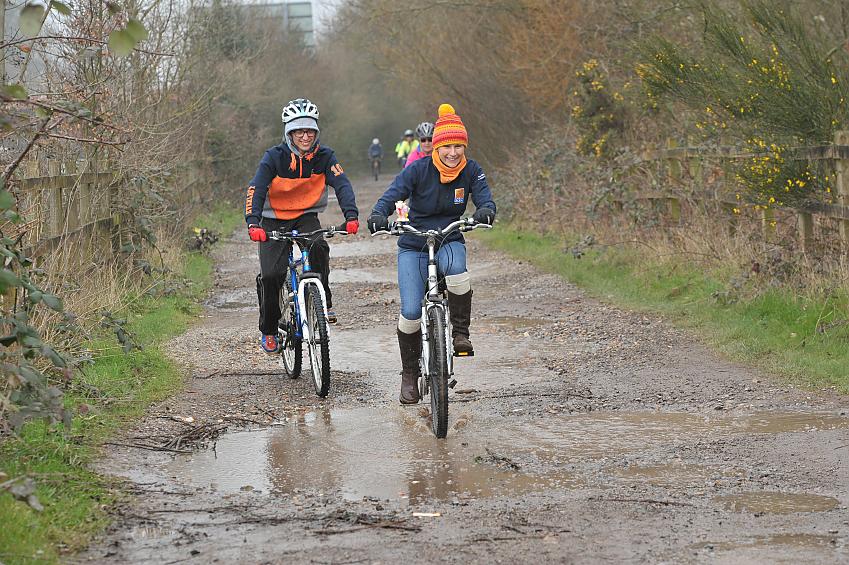 Technically not normally discussed as a ‘public right of way’ as they are not featured on the ‘definitive map’ held by local authorities, but a type of highway over which the public have a right of way on pedal cycles, with or without a right of way on foot.

Sometimes also referred to as ‘green lanes’ or ‘white roads’. Once again, technically not a ‘public right of way’, but rights of access on these routes are generally the same as on byways open to all traffic.

Permissive paths are where the landowner has given written permission for a route to be used across their land, and they are not public rights of way. Landowners have the power to redirect the path or close the path. Landowners may dedicate a permissive path to walkers only, cyclists only, horses/riders only, or maybe all three groups where they so wish to do so. Permissive paths are often found on Local Authority/Railway authority or National Trust land, and also include many Sustrans routes on the national cycle network.

Generally there is no right of access using a bicycle on access land, though in places permissive or de facto access rights may exist. Legislation on this issue is currently under review in Wales. 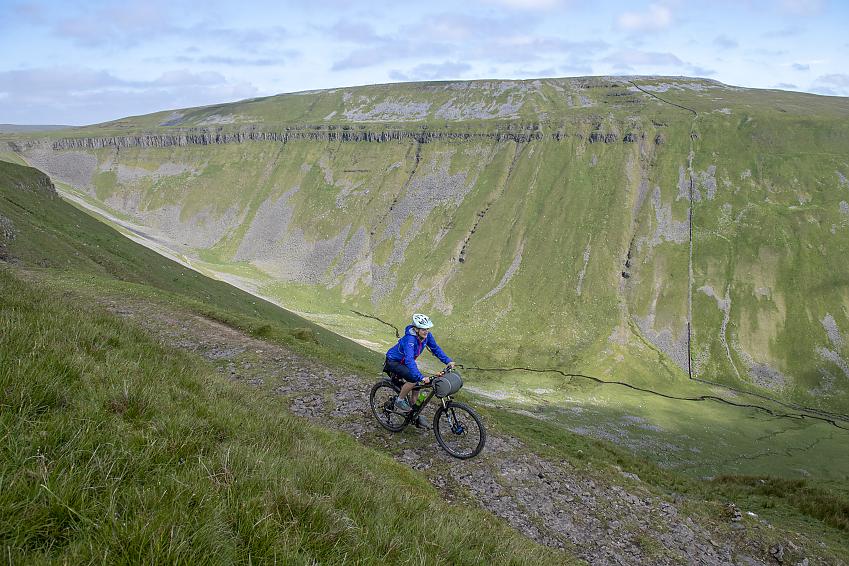 We have been careful to include here the word ‘recorded’. The recorded legal status of a right of way may not always reflect existing higher rights. For example, a route may be recorded as a footpath but have historically been used as a cart road, so rights for carriage driving, horse riding and cycling may still exist. Some historic rights of way do not appear on the map at all. These higher rights can be proven by researching historic maps and applying for a Definitive Map Modification Order, but this must be done before the cut-off date of 1 January 2026.

Higher rights may also exist where established use by the public over a period of time has given cause for a change in status. You can find more information about this in our guide to developing new paths for cycling in the countryside. This can be a complex are of law and we would suggest getting advice before relying on this to justify use.

A right of reasonable use

A right of way includes not only the right to pass and repass, but also includes any reasonable use that does not interfere with the primary right of passage. The definition of this is decided on a case by case basis. The courts have in the past found that such uses as photography and picnics, even protests, may be permissible as ‘reasonable’, but it depends on the nature of the right of way and the level of intrusion caused. Cycling UK (and, indeed, Parliament) believe that this is almost certain to extend to wheeling a bicycle, and there are arguments that in some cases it could even extend to camping overnight by the side of a highway as long as it did not prevent use by others.

Is cycling on a footpath illegal?

No - it is classed as a trespass against the landowner, which is normally a civil offence rather than a criminal one. This means that the landowner can sue the trespasser for damages in the civil courts, but the police are not involved and there’s no criminal record for the offender.

However in some placed byelaws might apply, in which case the situation is different, and use would be a criminal offence (albeit very minor), although we're yet to meet anyone who has been convicted of such.

The confusion often comes from Section 72 of the 1835 highways act, which makes it an offence to ride on "any footpath or causeway by the side of any road" ie. a pavement, rather than a public footpath.

It is an offence to cycle on any highway (including public rights of way) in a reckless or careless manner, or without due care and consideration for other users.

Cycling UK is campaigning for wider use of the footpath network for cycling (not to be interpreted as saying that all footpaths should be open for cycling), as the current system reflects only historic recorded use rather than suitability for use - many footpaths are better suited for cycling than nearby bridleways.

What about e-bikes, trikes and adapted cycles?

E-bikes which comply with regulations are categorised as a bicycle, so can be used, by a person aged over fourteen, on bridleways, restricted byways, cycle tracks and other routes.

Technically, the right to cycle on bridleways only applies to bicycles, not tricycles. As a non-mechanically propelled vehicle, tricycles can be used on restricted byways, byways open to all traffic, and cycle tracks. However, if the tricycle is an adapted cycle for disabled use, it can be used more widely.

Cycles that have been constructed or adapted for use by a physically disabled rider can be used in the same way as wheelchairs and mobility vehicles, anywhere where a right of access 'on foot' applies (under Section 20 of the Chronically Sick and Disabled Persons Act 1970). 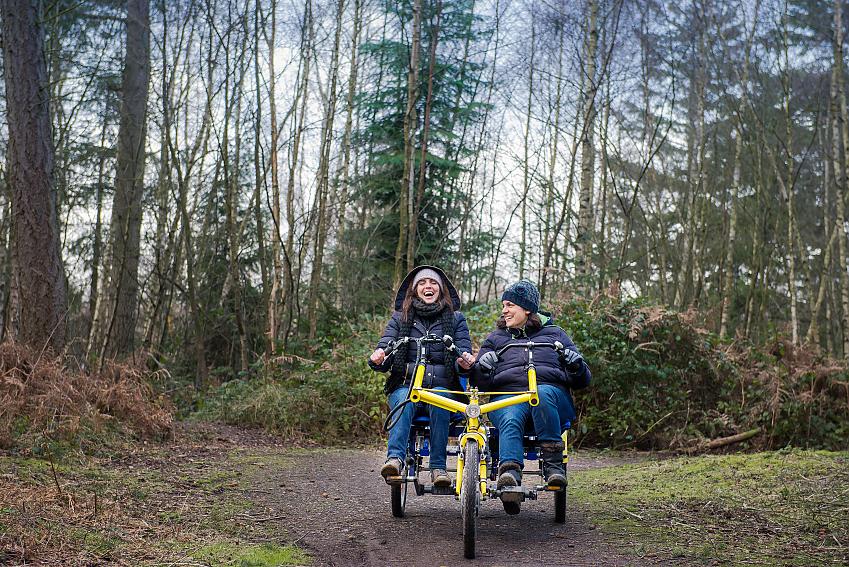 Top tips for a great ride

Show respect for all other users, and take care of the environment.

Practice low-impact cycling to protect trails and avoid wet and muddy trails. Keep to the line of existing trails, avoid skidding and take your litter home.

Stay focused, check your speed, and think about other people.

Farm, pet and wild animals are startled by sudden noise, be considerate.

Know your bike, your equipment, your ability and the area, and be prepared for the weather conditions.

Let people know you are there. Pass wide and slow, particularly with horse-riders and approach with caution on blind corners and descents. Remember - Be Nice, Say Hi! 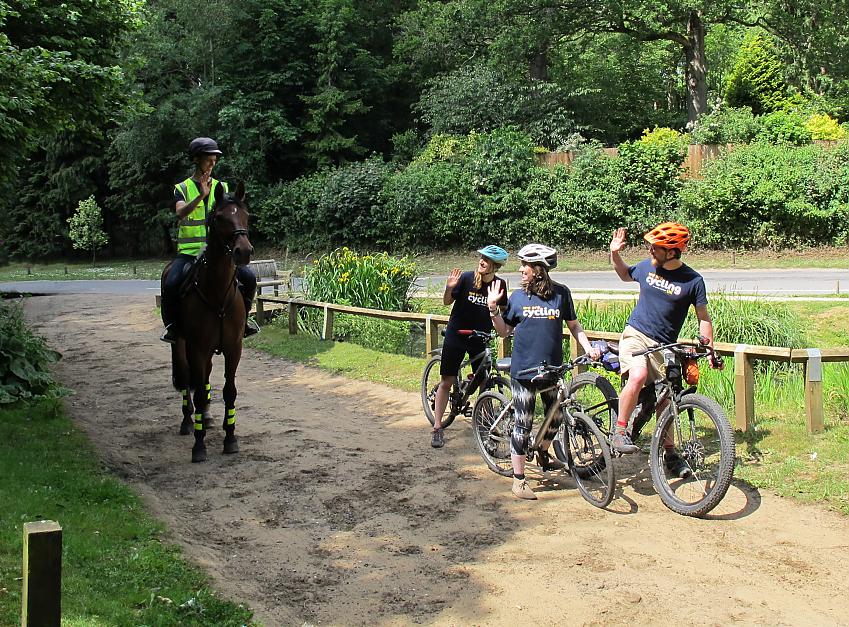 Sharing paths with walkers - a code of conduct for cyclists

Trash Free Trails: a community for lovers of the outdoors View

Is cycling on a footpath a trespass? View

Developing new paths for cycling in the countryside View

How to claim an unrecorded public right of way View

How to get involved with your Local Access Forum, and why View