Eileen Sheridan was one of the most celebrated cyclist (male or female) in the 1940s and 1950s. Many of the records she set then have not yet been broken, and she is now in her 90th year! She remains a positive force for cycling, and a member of CTC...

Eileen Sheridan does not sound as if she is in her 90th year. Her voice is young and clear, and she speaks enthusiastically of her passion for cycling and her happy memories of the sport – competing and touring for fun.

The dates don’t lie, however.   She was born in October 1924, and spent the 1940s and 50s on a bicycle, breaking all the records of the Women’s Road Records Association.

We used to ride in our baggy shorts, not padded of course, and a sweater with a pocket on the front where we kept our food. It opened like a sail as we cycled! I wore chamois  leather shorts when I was racing, but that’s as smart as it got! There were no showers or anything. We used to finish, find out our time and ride home!’‘

Her husband Ken, whom she married when she was only 19, encouraged her cycling.

"We started touring together  - we were both very keen. I rode an open frame BSA bike, which had been my 14th birthday present! I didn’t realise what a heavy job it was until other people told me! I was quite happy on it though – it had a fixed wheel which meant I was pedalling all the time!  I kept the same one till Ken bought me a second hand Claude Butler for my 21st birthday in 1944. It was a beautiful little job – and Claude Butlers were not easy to come by in wartime."

They joined CTC and also in 1944 the Coventry Cycling Club (‘I am the President  now, bless them"). This got her keen on racing.

From her home in Coventry, she and Ken entered the first  140 miles in 12 hours: "If you could do that, you were considered quite a good tourist!".

She soon proved herself to be considerably more than that.

"The man who was organising it came up to Ken and told him to take me home, as he thought I wouldn’t be able to manage it. I refused, even though I was the only girl there. He looked doubtful but said no more.  It was lovely. Later, the organiser came up to Ken and said: ”I’m no longer worrying about your wife. The ones I am concerned about are some of the chaps at the back!”

The next year, she started time trialling and won her first National 25-mile Championship, beating the record of Susie Rimington.

"She was a marvellous rider. This was the first time I beat her. I didn’t believe it! I told the timer he had to be wrong – but he wasn’t."

She says with regret that the women were never allowed to race against men: "The rules were very strict, which was a shame, because it would definitely draw out the speed. To chase is built into my personality!"

Her son Clive was born in 1946 by Caesarian section, which meant that she had to take a break from the highest level of competition, although it did not stop her winning a club time trial within five months. "It took me over a year to get really good again." 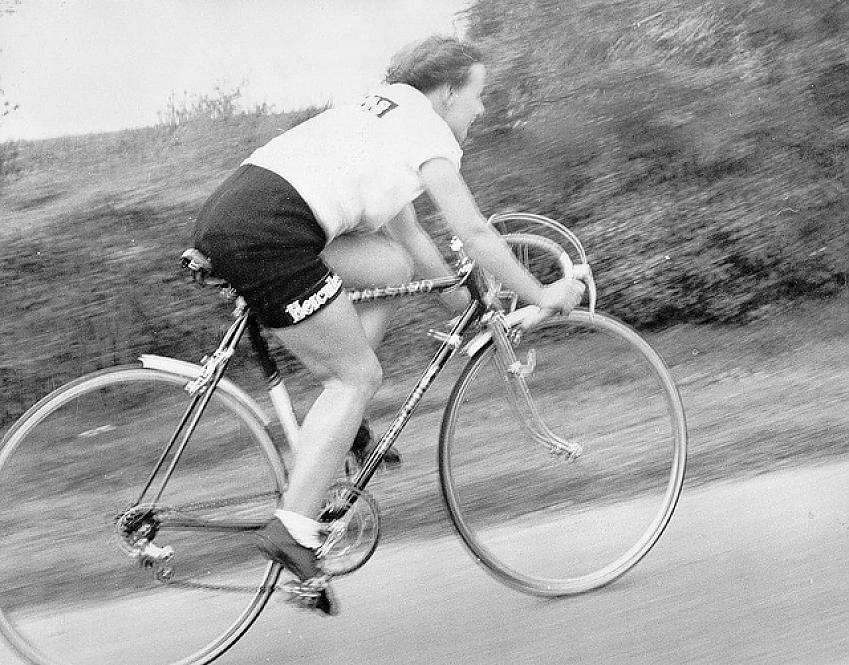 Record after record followed. The women’s British Best All-Rounder time trial in 1949 and 1950; the Yorkshire Cycling Federation 12-hour race in 1949 (a national record with 237.32 miles, behind only four men), national 50 and 100-mile championships in 1950…all of which culminated in Eileen being awarded the Bidlake Memorial prize for creating a new high standard in women’s racing. Her time for 25 miles never fell below 1 hour, 3 minutes 58 seconds;  she said she wasn’t 'warmed up' before then.

Eileen proved she had staying power.  "I got a telegram from Hercules offering sponsorship. I accepted and attacked all the British records, which then were held by Marguerite Wilson.  I got all 21! Then they sent me to Ireland and I broke two more records, including a man’s." Five of the 21 have yet to be beaten, including the London-Edinburgh record of 20h 11m 35s, set in 1954.

"Please don’t say I was the only fast girl in the country then. There were a number  including Stella Farrell. We were friendly rivals and we still keep in touch. Then Beryl Burton was absolutely magnificent: the greatest athlete of all time, an international star."

"I would have loved to compete in the Olympics" she told me.  Then she laughed at another memory.

"They all look so wonderful in their magnificent outfits. We used to ride in our baggy shorts, not padded of course, and a sweater with a pocket on the front where we kept our food. It opened like a sail as we cycled! I wore chamois  leather shorts when I was racing, but that’s as smart as it got! There were no showers or anything. We used to finish, find out our time and ride home!"

In 1955 she retired from racing and her daughter Louise was born.

She has the fondest recollections of her off duty time in the saddle.

"Many members of the Coventry Cycling Club are of course members of CTC and it has been marvellous getting people interested in cycling. We went touring, all bikes on a train for free, and then cycling about a gorgeous area – Wessex or somewhere. Then tea and home again by train. It has been a very happy time."

She also took children who had won a road safety campaign on a cycling holiday in France with Ken, Clive and the secretary of CTC, Les Warner.

In 1959 she was asked by the cycling industry to prove to families that they could travel reasonably, in a short time, to the Continent by bicycle. She and her son Clive entered the Daily Mail Blériot Anniversary Air Race from London to Paris.

"It was such fun.  We started at Hyde Park Corner, cycling to Southend airport, went from Marble Arch to Southend, on to the plane with our bikes and over to Le Bourget, which was then only a ploughed field. Two Frenchmen on bikes were waiting; they pointed to their back wheels indicating we should follow them, and led us through the back streets of Paris to the Arc de Triomphe. The French went mad when we got there, and kept making us go back and ride in again so they could take more photographs!"

What advice would she offer women racing cyclists today?

"Well, everyone trains so differently now, with such professional help. I don’t think they need any advice from me. The proof of their intense preparation is the glorious results our women cyclists achieve – which they truly deserve.  I wish everyone happy cycling!"