Despite restrictions being largely lifted in the UK, some counties are still living under local lockdowns. If you're unable to get out cycling right now, and you're desperate to escape the heatwave, or just looking for some cycling inspiration, we've got the antidote.

Where There’s a Will

Emily Chappell says she got into self-supported endurance racing almost by accident. She signed up to ride the Transcontinental in 2015 basically to see if she could. While this book documents her exploits in that race and others, it is as much about friendship, mental health, and grief as it is about racing bikes.

Chappell’s writing is engaging and moving; I read this in just two sittings. Part of what makes it so absorbing is how relatable Chappell is. Even when she’s writing about cycling, she’s also writing about break-ups, periods, snacks, her family and friends. She frequently refers to her self-doubt and shyness. No matter how remarkable the achievements,Chappell makes them feel like they are within anyone’s grasp.

The section in which Chappell describes her relationship with Mike Hall – two slightly awkward cycling nerds who just get each other – is poignant. And the subsequent description of her coming to terms with his loss is gut-wrenching.

This book will appeal to anyone who turns to their bike in times of trouble, and it might inspire a big ride of your own.

The best place to cycle with children or friends who aren’t confident cycling is on a traffic-free trail, and this book lists 400 of the best of them throughout Great Britain. It is the fourth version of a guide first published in 2004, offering information on routes that are often old railway lines. There are also map and website recommendations, and handy tips like where to park and stop for refreshments. I particularly liked Nick’s succinct history of the trails, as I learned new things about routes that I have ridden many times.

Trevor clearly kept detailed diaries: this is an engaging, blow-by-blow account of his 16,000-mile journey from Ushuaia, Argentina to Deadhorse, Alaska in 1999. It’s a frank account that doesn’t paint the author in the best of lights: he abandons a companion; is disappointed strangers don’t recognise his 'achievement'; and he just blitzes his way through the continents, with few nods to culture or custom. If you buy it from smile.amazon.co.uk you can nominate a charity (such as Cycling UK) to receive some of what you pay. 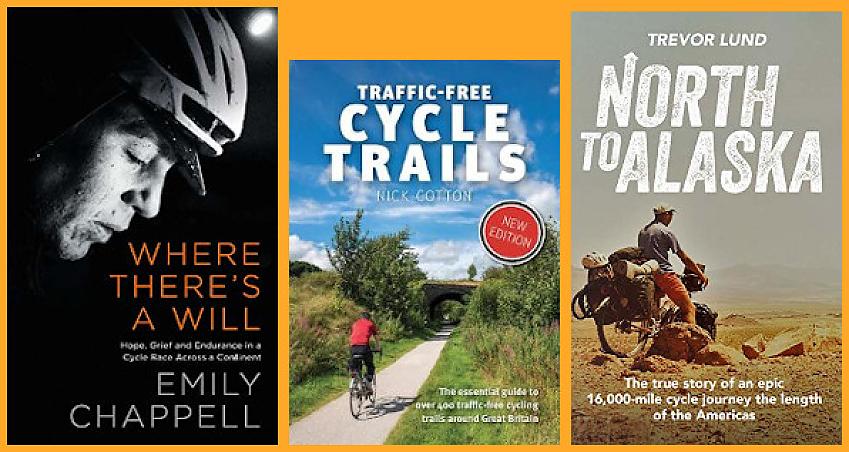 I meant to read this before cycling along the Rhine last summer, but reading it afterwards added to my enjoyment; the name of each riverside town sparked memories from the trip. Along the river, Coates not only hops across borders but also back and forth in time, from Romans and Germanic tribes to 16th-century hilltop castles and onwards to the devastation of WWII. The history is fascinating but it’s the author’s anecdotes and turns of phrase that keep you entertained as he progresses by bike, boat and (briefly) on the back of a cow.

Fifty miles wide is not an account that brings to life the physical contours of Israel and Palestine. Instead it delves into the author’s experiences of the mental scars that have torn through the land and shaped the people he encounters. The conflict and its repercussions on the people living in the Holy Land are the focus, the riding almost incidental. It’s the stops between checkpoints, deserts, towns, and cities that the book dwells on.

The bicycle does have its place. Like in any cycling travelogue, it is the key granting entry to places and discussions that other forms of transport would render impossible, and as the reader you benefit from this view and the author’s insight.

It’s clear the author had a clear idea of what he would encounter: oppression of a people, division, and conflict. In part, his travels in both countries confirm his fears, making for a challenging trip, filled with frustration at the hardships and difficulties of others he encountered. Julian’s own difficulties are treated almost trivially in comparison.

Don’t take Fifty Miles Wide at face value, though. To paraphrase the author: this book is like food and needs digesting. If you don’t chew it over, you’ll get problems in your guts.

Jack thurston captures the magic of rides around the Giant of Ribblesdale, up and over the Nick o’ Pendle, the solitude of Coquetdale, and the best bits of everything in between in 36 stunning routes. I know almost all of these routes, and while I could think of others to include there are none I’d take out. Lost Lanes North is a beautifully photographed guide to the lanes and forgotten byways of Northern England. Graded rides, pubs and pit stops, detailed maps, and bite-sized information are all
weaved together well. A great guidebook. 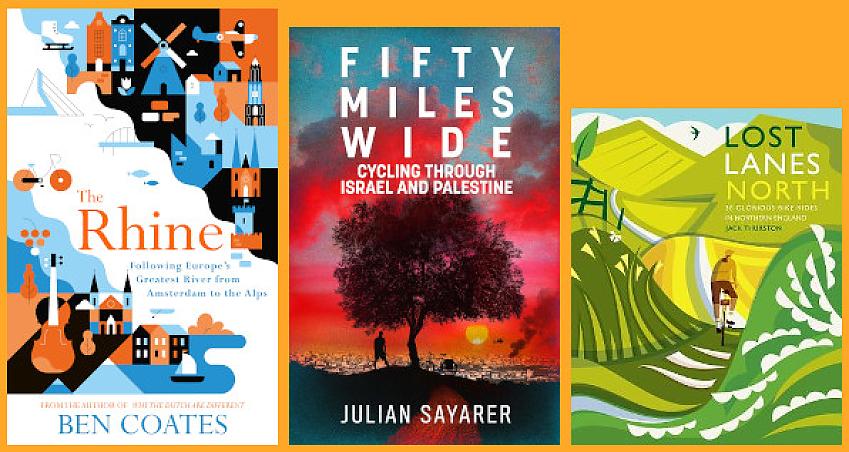 This made me laugh in the first few pages, with sentences such as (on cycling in Zanzibar): “I’m clammy, it’s steamy like a 1970s’ airing cupboard.” It’s about the author’s passion for the utility bicycle. He is inspired by his grandfather to explore, work, and film by bike in the UK and all over the world. Nick has an easy and warm writing style. The book has a strong human and environmental message, and it highlights how underestimated bicycles are, especially as transport. I really liked it.

This is less a cycling adventure book and more a tale about overcoming personal obstacles. Alex Staniforth is refreshingly honest about his struggles with bulimia and depression. His disappointment at not reaching the summit of Everest is carried throughout his next challenge. He attempts to climb all the highest peaks in the UK, travelling on foot and by bike, in just 72 days. Alex’s mental health problems make his determination even more inspiring and relatable.

The Hub of the Universe

This is not a coffee table book; it’s a bible of all things Sturmey Archer, a company famous for over a century for its internal hub gearing. First published in 1987, The Hub of the Universe charts the company’s history and documents the products it produced.

The book plunges headfirst into a comprehensive narrative of the workings of internal hub gearing, the journey of the company itself, and the advancement into further product lines, notably drum brakes, coaster brakes, and gear shifters.

As an antidote to the at times technical aspect of the text, there are over 400 superb images, many in colour. They range from advertising to fantastic exploded diagrams of internal gearing.

If you’re an aficionado of cycling history, have an interest in hub gearing, a passion for mechanical engineering, or simply want to increase your knowledge of a British cycling institution that revolutionised the cycle industry, read this book.

At over £40 posted, even if you’re eligible for the Veteran-Cycle Club discount, this isn’t cheap. But it’s physically well put together (it’s a sturdy hardback) and, in terms of the content on this specific subject, it is unparalleled. 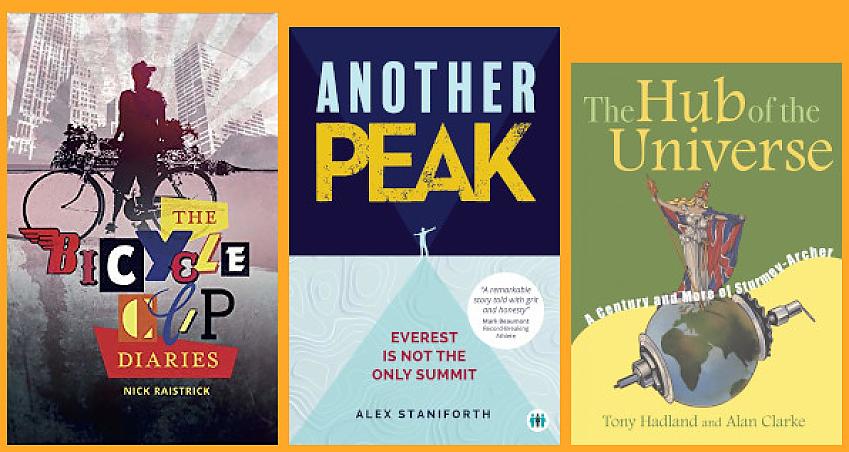 Like his previous books, this is another catalogue of Simon Warren’s favourite climbs, this time in Italy. All have detailed descriptions and use a useful grading system. The hundred climbs feature not just mountain passes made household names by the Giro d’Italia but also others that he’s discovered and has included due to their severity or scenery. While Warren’s passion for Italy and the Giro come over well, this guide is mostly a practical planning tool.

This is an engaging, behind-the scenes look at the what life is like in the professional peloton. It’s anonymous because the writer is still racing – and it strays so far from any PR-approved script that he’d otherwise probably get cold shouldered at best or sacked at worst. It’s refreshingly honest. Never trust a kit endorsement from a professional cyclist, the author says; they’re paid to sing its praises. He tells us what the peloton really thinks about Team Sky/Ineos, what the culture is around doping, and much more.

This guide details 26 old-school mountain bike routes in the Dales. Instead of sinuous forestry trails, these are wide stony and grassy tracks, often with expansive views and uncompromising climbs. Fit your biggest cassette; Fremington Edge, for example, takes no prisoners. There’s a good mix of routes, and the maps are excellent. The only thing missing is an associated website with downloadable GPX files. 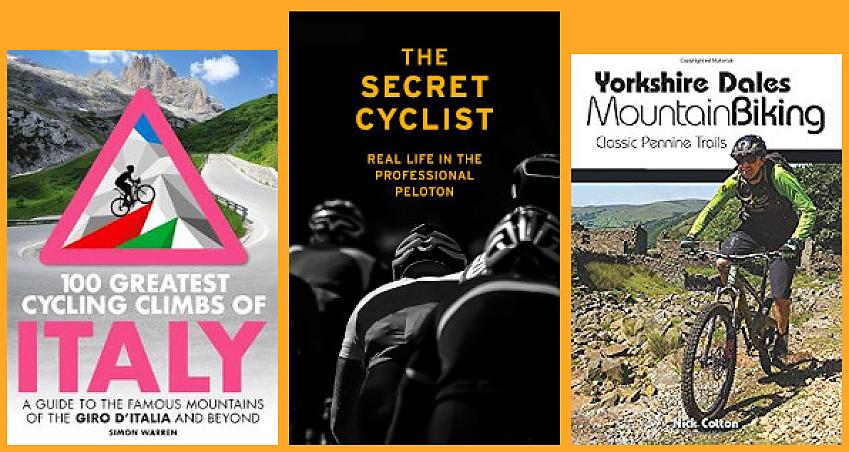 Give your cyclist a book for Christmas View