Socially distanced exercise is vital for our wellbeing, but make sure you follow local rules

Coronavirus rules and restrictions vary across the UK and are changing all the time. Here is the latest guidance

*** This is a live document and was last updated Friday 26 March to reflect the rule changes in Wales from 27 March and planned changes in Northern Ireland from 1 April.

Note that it is not possible to cover every local variation across the UK here, and you should always follow local restrictions where these are imposed.

Our previous Q&A on cycling safely during the coronavirus pandemic, which has been evolving for many months and has grown significantly in size, is now called Cycling in the coronavirus era with advice from our panel of experts around some of the most common FAQs.***

For full details on organised group riding see our separate page for member and affiliate groups.

The government’s roadmap out of lockdown document sets out proposed relaxations to restrictions in England on or after 29 March. These include allowing groups of up to six people, or two households, to meet outdoors.

Cycling UK’s general advice to clubs pre-Covid was to restrict group rides to a maximum of 15 people, however currently we are advising that this should be treated as an absolute maximum for group rides, not a target number, and that people should exercise some discretion and common sense depending on where they are riding.

The latest guidance in Scotland from 12 March allows informal exercise in groups of up to four adults from up to two households, as well as organised group sporting activity (where a Covid-19 co-ordinator is involved) in groups of up to 15 adults. However, in line with recommendations agreed between sportscotland and Scottish Cycling, Cycling UK recommends a maximum group size of 9 adults (from unlimited households).

From Saturday 27 March, guidance in Wales allows exercise in groups of up to six adults from up to two households. Organised sport exemptions do not currently apply to group cycling in Wales.

The planned rule changes from 1 April will allow larger groups (up to 10 from up to two households) to exercise together, but organised sport exemptions will not apply until 12 April at the earliest.

Exercise and 'staying local' in England

Cycling UK, along with British Cycling and British Triathlon, recently wrote to the Department for Digital. Culture, Media and Sport to ask for clarification on what constitutes local exercise. The minister for sport, Nigel Huddleston, has now responded:

"As you are aware, the government’s current guidance regarding outdoor exercise states that people are allowed to leave their home to exercise outdoors, and should remain as local as possible.

As you state, people’s circumstances are different and so this guidance relies on people to use their common sense to determine what is and is not a reasonable distance for their outdoor exercise.

As we navigate these necessary new restrictions, we remain clear on just how important exercise is to people's health and wellbeing, whilst staying safe at home."

While the minister's response stopped short of defining what constitutes "local", we are pleased to see official recognition of the fact that people's individual circumstances vary and that common sense needs to be applied. What is appropriate in one area may not be appropriate in another. The intention behind both the regulations and the guidance is to limit contact between people and reduce the spread of infection, and these must be balanced with the well established physical and mental benefits of exercising outdoors.

Cycling UK therefore encourages people to continue to cycle for exercise during the current lockdown, but to do so in a manner which minimises risk. In the absence of specific regulation on how far they can travel, cyclists should use their common sense: for example, avoiding crowded or narrow routes where social distancing is difficult to maintain, but also bearing in mind that you may put others at risk if you suffer an injury or mechanical problem far from home and require rescue. To minimise unnecessary travel, start and end your rides at home if this is practical; however, common sense may dictate that travelling a short distance to a more suitable location is reasonable.

Cycling with a group

Regulations and guidance on meeting and exercising with people outside your own household change regularly and vary between the four nations of the UK. The advice in this article reflects the legal position as to what cyclists can and cannot do in various parts of the UK but Cycling UK reminds riders to use their own judgement when deciding whether it is sensible to ride. Different rules may apply for organised group rides: please check our advice on group riding for more information. We have a separate article with tips for socially distanced riding.

Cycling with friends and family

The below guidance sets out the government rules for cycling with friends and family in each of the four nations.

The position across the UK is summarised in this graphic. For further details, see the country-specific sections below. 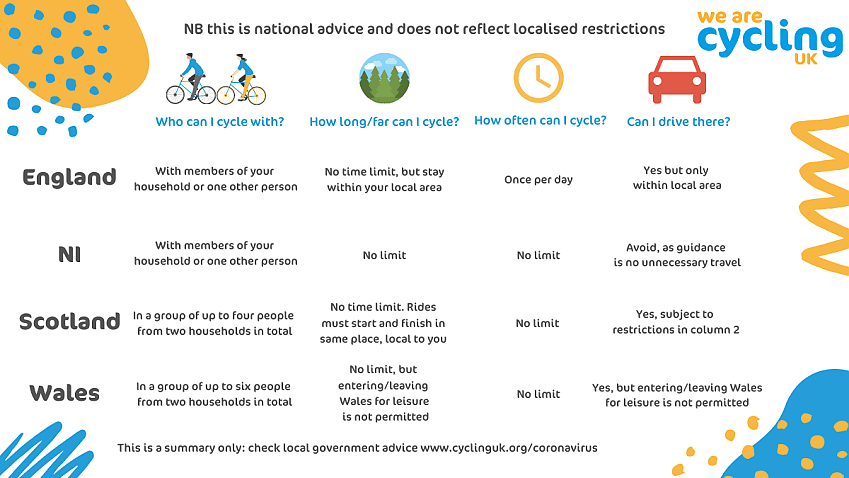 New restrictions were announced by the prime minister on 4 January. People must stay at home and only leave for permitted reasons, which include exercise. However, exercise must only be done either alone, with members of your household, or with one person from outside your household, while observing social distancing. There is additional guidance that exercise should also be limited to once per day, and you should stay within your local area. The definition of "local area" is unclear, but government guidance is that you should "avoid travelling outside of your village, town or the part of a city where you live". You can travel a short distance within your local area in order to exercise, but again the distance is not defined. Relaxations to the restrictions are proposed from 29 March, which should allow up to six people, or two households, to meet outdoors.

Restrictions are in place in Northern Ireland until 1 April prohibit group exercise (including organised group rides), except where this involves members of a single household or social bubble, or with a single other person from outside your household.

From 1 April the restrictions in place in Northern Ireland are being relaxed, permitting up to 10 people from two households to undertake outdoor sporting activities, which includes a group cycle ride but only involving two families. Further relaxations are expected from 12 April, though these have not yet been confirmed, which should allow the recommencement of group rides without the two family restriction.

There is no official limit on the distance you can travel, but advice is to stay local and avoid unnecessary travel. You should also remember that the Republic of Ireland has a strict 5km (3 mile) limit on travel for exercise, which is due to be reviewed on 5 April.

All of mainland Scotland, along with some islands, remains at Level 4. Revised regulations from March 12 allow up to four adults from up to two households to meet or exercise together outdoors in these areas. Exercise must begin and end at the same place, and that place must be either within the local authority area in which you live, or within five miles of that local authority area (passing through other areas within Level 4 is allowed). These are the legal limits set in the regulations; however the Scottish government's guidance is that you should "travel no further than you need to reach to a safe, non-crowded place to exercise in a socially distanced way". Separate rules apply for organised group activities.

From 27 March, restrictions are being relaxed to allow up to six people from two different households to meet outdoors, and such groups can cycle together without any time or distance limit on the length of that ride. The "stay local" message is also being dropped, so within Wales there will be no restrictions on where you can ride or for how long, subject to the restriction that any group you ride with can’t be larger than six or involve more than two households.

There are more substantial relaxations allowing the resumption of organised activities and sports for children under 18, which would potentially allow larger group rides for children, but currently that exemption only applies to those under 18.

It is important to note however that there are still restrictions on cross-border travel, so cycle rides that cross between England and Wales, in either direction, are not permitted if they are purely for leisure or recreation. That is not an absolute ban on any cycle ride across the border, as such a ride is permitted if it falls within the "reasonable excuse" category, which would include cycling to work or for an essential journey.

Please get in touch with the team via publicity@cyclinguk.org if you have any queries about coronavirus.

Allocate a volunteer Covid officer to your group View

Cycling in the coronavirus era View

Has lockdown changed these pedalling partnerships for the better or worse? View

What are you doing for National GetOutside Day? View

The VE street party we can’t have tomorrow View

‘Be kind to cyclists’: Cycling UK and British Cycling call for end to hostility View

Campaign from your sofa: write a letter to your local paper View

Air pollution: Why tomorrow could be different View

Self-isolating? 10 bike things you can do View

Can a turbo trainer novice be converted by the coronavirus lockdown? View

Cycling in the time of coronavirus – NHS benefit or burden? View

Open for business in spite of the virus View

Is it OK for me to wild camp right now? View

“No excuse for riding together in groups” says Cycling UK View