Cycling UK member Richard Hearne struggled to find a cycling club where he felt like he truly belonged, so he decided to start his own LGBT friendly cycling group in Greater Manchester.

Richard enjoyed cycling as a child but like many people it dropped off his radar in early adult life. Then five years ago, he bought a road bike and his cycling passion was reignited. With his new-found love of cycling Richard decided to find a group to ride with.

Looking for a group

“I tried one of the local cycle clubs and even though I was pretty fit, I struggled to keep up, plus they lost people at the back of the group which surprised me and was off-putting,” said Richard. “Being a gay man, I also dreaded being asked about whether I had a girlfriend or being made to feel like an outcast. Those sub-conscious fears can niggle away at your confidence.

“I started cycling with a couple of LGBT groups across the country, but I struggled to find one that had consistently well attended rides or that was truly diverse.”

Richard decided that with an LGBT population of over 200,000 people in Manchester he would have a go at setting up a new LGBT friendly cycling club that was fully inclusive and diverse. 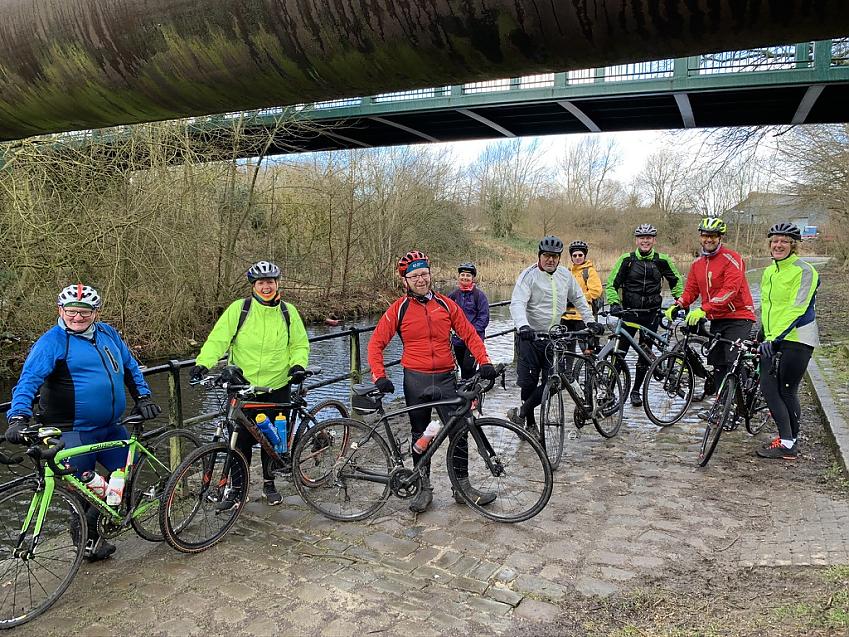 In the summer of 2019 Richard put on the first social bike ride taster sessions for his new cycling group Pride Out.

The response was incredible and interest in the group has snowballed. The group now have hundreds of followers on social media and a core group of dedicated riders, and have been featured on local radio and TV, as well as nationally on BBC radio.

From January 2020 there was enough demand to organise rides weekly, and Richard found he needed to recruit a committee and a group of volunteer ride leaders to help him run the club due to its expanding size.

“Cycling UK has been incredible in terms of advice and support and we are so grateful,” said Richard. “It’s so amazing to know there is a cycling charity, such as Cycling UK, that has your back and is rooting for you to do well.

“The funding we have obtained will made a real difference to offering safe and consistent quality bike rides for our members, whilst helping us to get established and grow.

“We especially have to say a huge thank you to our local Cycling UK Cycling Development Officer who has held our hand from the very beginning and been so encouraging.” 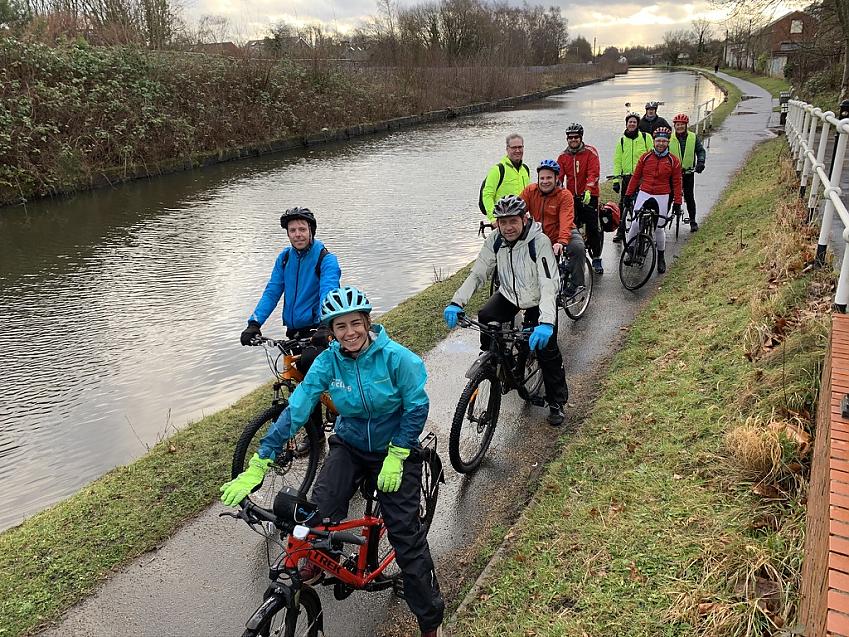 The groups increasing popularity is testament to all the hard work Richard and the rest of the committee have put in, but the growth in the number of members isn’t the only thing Richard has to be proud about.

“For me, the most significant success, by a country mile, is the diversity and inclusion aspect of the group which we are working hard to achieve,” said Richard. “We are staking our pole firmly in the ground and saying we refuse to just become another typical cycle group full of men, as much as we love having men in our group.

“We actively welcome and encourage everyone in the LGBT community to come cycling with us, regardless of race, ethnicity, ability, sexuality, gender identity or the bike someone uses.

“As a result, we’re getting lots of interest from transgender, non-binary, queer and women cyclists. After all, it’s much more fun meeting different identities and people of all sorts of backgrounds.

“We also welcome allies, so no-one will be turned away from our group, so long as they believe in our ethos.”

The Pride Out committee is keen that the inclusive ethos remains at the heart of the club. The group always ride at the pace of the slowest rider and no-one gets left behind, there is an emphasis on the social aspect of rides and making new people feel welcome.

Sadly not everyone in the Greater Manchester cycling community has seen the value of this, and whilst promoting the club online Pride Out have come up against some negative comments from other local cycling enthusiasts asking ‘Why is there a need for an LGBT cycling club?’

Pride Out have explained why having a LGBT friendly club is so important.

LGBT people, like wider society, should be entitled to focus on having fun, getting exercise and meeting new people without the fear of judgement or discrimination

“Many people question their identity, and for some it can make them feel uncomfortable, perhaps because of unfair societal pressures. This can mean some people are put-off joining a sports group in fear of being made to feel unwelcome.

“We want to do something about that in cycling. LGBT sports groups are great because they allow people to meet like-minded people where they don’t have to explain or justify who, what, how or why they are… they can just be.

“LGBT people, like wider society, should be entitled to focus on having fun, getting exercise and meeting new people without the fear of judgement or discrimination.”

The way in which so many members feel comfortable being themselves and expressing their identity fully whilst out riding with the group is testament to how important creating this kind of a safe space is for the LGBT community.

Supporting each other through the pandemic

The recent outbreak of Covid-19 has put the brakes on group rides for Pride Out, but it hasn’t dampened the spirits of club members or put a stop to the club planning for the future.

Club members have been staying in touch online sharing ride photos and routes and doing digital quizzes and spin sessions to keep engaged.

Once lockdown lifts and group rides are back on again, Cycling UK will be putting on a Group Ride Leader course and First Aid course to upskill volunteers in the club and enable the group to put more regular rides on. 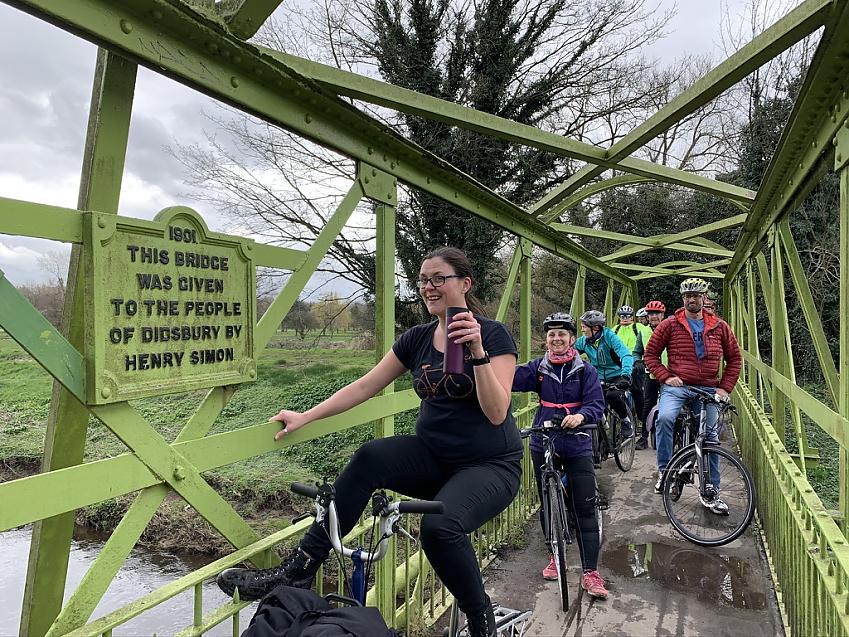 Vision for the future

Getting back to regular riding is just the start of Pride Outs plans, and the group have big visions for the future. At the moment the group is focussed in Manchester and the North West of England, but they have had interest from potential members across the country looking for LGBT cycling groups to join in their area.

“Over time we may spread further afield, so we can share the joy of cycling to even more LGBT people across the UK,” said Richard.

“We might also consider hosting ancillary activities which compliment cycling; for example we’re excited about the idea of putting on a weekend camping event in the Peak District where people can cycle (or drive) from Manchester and have two days of cycle rides around the Peak District which will cater for all abilities.

“It could be a great atmosphere and opportunity for people to connect with others, feel less isolated, and have some fun at the same time; that’s what it’s all about isn’t it?!”

More about how Cycling UK is encouraging people from all walks of life to cycle, volunteer and participate in our group activity.

Plus how you can pick up your rainbow shoelaces ready for the Pride Ride during Bike Week.

Pride Out is a cycling club for LGBT people and their friends in Greater Manchester and the North West of England.

More information about Pride Out and how to get involved

My journey in cycling as a trans woman View

Velocheer: Issue 10 of Cycling UK's newsletter for all our volunteers View
Cycling UK continues to support the UK to cycle
This remains true during this difficult period with the ongoing threat of coronavirus Covid-19
Read our latest advice on cycling