CTC’s Road Safety Campaigner, Rhia Weston, reports on her day at a quarry site operated by CEMEX, a global provider of building and construction materials, learning about the steps the company is taking to improve cycle safety.

It was a CEMEX vehicle that was involved in the death of Cynthia Barlow’s daughter, Alex McVitty, in 2004 in London. Since this incident, Cynthia has campaigned relentlessly to make construction and haulage vehicles safer. She bought shares in CEMEX so that she could speak about her experience at the company’s AGM. Cynthia’s story motivated CEMEX to vow to raise the company's safety standards.

CEMEX has certainly kept its promise and is leading the way in HGV safety by going above and beyond what is legally required of operators. The company is encouraging others to follow its lead by being involved with initiatives such as the Construction Logistics and Cycle Safety project (CLOCS) and the Freight Operators Recognition Scheme (FORS), and by ensuring all its sub-contractors operate to the same high standards. Since the incident in which Alex lost her life, the company has not been at fault for any other fatal injury collisions, although it has been involved in two fatalities.

Actions as well as words

Earlier this year, the company joined campaigners in Brussels to press for a European-wide law mandating new safety measures for all lorries, and in June, two of the company’s employees cycled 600 miles from Glasgow to Heathrow to highlight the importance of cycle safety among CEMEX staff and to raise money for road crash victims charity RoadPeace.

CEMEX has undertaken the following steps to improve the safety of its vehicles and drivers:

In addition to raising the safety of its own staff and vehicles, the firm is taking steps to educate cyclists of the dangers of cycling close to large vehicles. The firm lends vehicles to Exchanging Places events, at which people are invited to sit in the lorry cab to get a driver’s view of the road.

CEMEX recognises that these events are a short-term solution, not a panacea. However, until blind spots are completely eradicated and enough is done to counteract driver error, educating cyclists and pedestrians about the dangers of getting too close to large vehicles is a necessary step.

CEMEX is trialling new technologies on two of its trucks operating out of a quarry near Slough, these include 360 degree cameras and a sensor fitted to the truck’s windscreen. The sensor measures the proximity of the truck to vehicles ahead and gives a visual and audible warning to the driver when they get close to the vehicle in front, warning the driver to slow down if needs be.

The monitoring screens in the lorry cab are far less imposing and distracting than one would expect. There are just two fairly small screens to the left of the driver. Still, it certainly does require skill and practice to be able to check all the mirrors plus the screens before moving off. As can be seen in the photo below, there is also a hands-free phone in the cab: another distracting device. 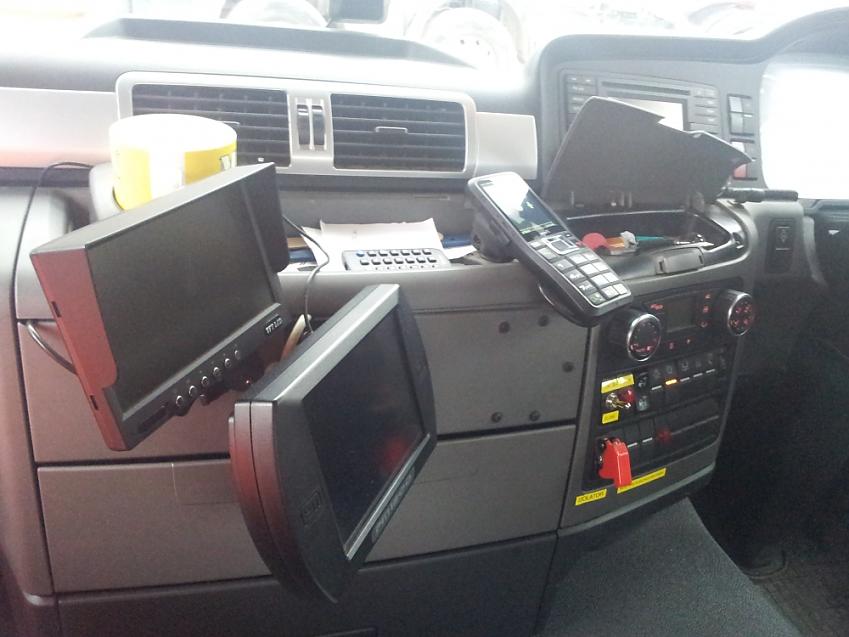 There are four cameras positioned around the outside of the truck, giving the driver a 360 degree view of the surrounding area. The images the cameras record are brought together in one image on one of the internal screens. This means the driver can see the entire area around the truck simply by looking at that one screen.

Gaps in the system

Although the 360 degree camera idea is great in theory, in practice it does have gaps. For example, as a person walks around the vehicle they are lost from site for a split second when they move from an area covered by one camera to an area covered by the next camera. This is a failure that improvements in technology could address.

Another failure in the system is that if the camera lenses are not regularly cleaned, the images they record can be blurred and effectively useless. This is of particular concern for trucks that collect multiple loads of aggregate throughout the day, with dust and dirt blowing up from the back of the truck. One can imagine that by the end of a day’s work, the cameras would be pretty dirty, so a system would need to be put in place to ensure the lenses were cleaned at regular intervals throughout the day.

The journey from the quarry site to a cement mixing plant was supposed to be an opportunity to see the driver and safety devices in action, but the route was mostly on multiple lane main roads - one of which had a cycle path running alongside it on the pavement - so there was very little interaction with cyclists.

CEMEX has extended an invitation to CTC to go on another journey; this time during the early morning commuter rush hour, when there are far more cyclists on the roads and more occasions to see safety devices and drivers in action.

CEMEX are doing excellent work to improve the on-road safety record of the construction and haulage industries, but there is still a margin for error or abuse of the system. There is little information from technology companies about how or where to fit safety devices or about the performance of technologies in varied weather conditions and during the day or night.

The Transport Research Laboratory (TRL) is currently assessing different safety devices with the view to give a safety rating that companies can use to decide which devices to opt for. However, if there isn’t buy-in from drivers, there is potential for drivers to abuse the system by turning off safety devices or ignoring them. Organisational leadership and comprehensive and frequent training are therefore key to ensuring drivers accept the new safety measures.

A European-wide law obliging manufacturers to create vehicles that have new safety devices is still eight years away. Until then, campaigners and companies like CEMEX need to continue working together to bring up the standards of other firms; to encourage research into new technologies and training; and to press for more robust UK legislation.