The Big Bike Revival in Scotland has supported over 70,000 people to cycle for everyday journeys and leisure by equipping them with riding skills, fixing their bikes and providing led rides. As it draws to a close after five years, we look back on its achievements and the people who it helped to discover a love of cycling

Aiming to revive the thousands of bikes lying unused in sheds and garages, the Big Bike Revival in Scotland was delivered by a team of locally based Cycling UK development officers, who supported community groups right across Scotland.

This approach of working closely with communities was key to one of the project’s many success stories, on the Isle of Bute. Local resident Dave Hayes wanted to set up a community cycling group but didn’t know where to start. Development officer Ralph Jessop helped Dave to hold a led ride on the island which attracted 50 people of all ages and Bute Community Cycling was born. Dave said:

“It was just an enormous success; I can’t highlight enough how important the Big Bike Revival was. It was the catalyst to develop something that we had in our heads but didn’t know how to take the first steps."

Since then, the group has addressed many of the barriers to cycling that people on the island experience. They provide cycle skills training, including at local schools and have refurbished over 60 bikes on the Mount Stuart estate which are available for loan. 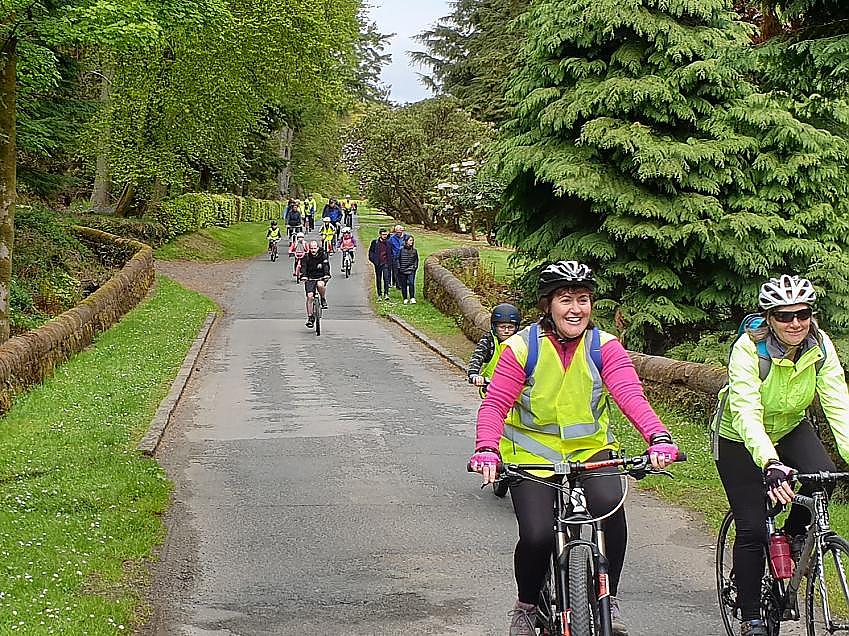 Staying with the island theme but a long way further north, 100 people aged 5 to 96  enjoyed a weekend of inclusive cycling activities on Shetland in summer 2019.

Some of the participants were care home residents, with one woman getting on a bike for the first time, proving that you’re never too old to try cycling! Another session was run to enable people with learning difficulties to try a range of adaptive cycles. This was such a success that Stephanie Bain from Disability Shetland described the event as one of the best moments in her entire career.

“The wind in their hair and the looks on both their and their families’ faces were so memorable for me…we have seen so much joy this weekend. It has been a privilege to support even more people to get involved in community events by having these bikes and trikes available, the smiles said it all.”

As a result of the events, community group Shetland Sport for All was inspired to apply for funding for their own fleet of adaptive bikes on the island.

For development officer Jeff Frew, who covered the south west of Scotland, the success of the Big Bike Revival in Scotland was due to getting the right people together.

“One of the key factors was linking people who had the enthusiasm and energy to get local people cycling.”

The project worked with over 400 community groups in every local authority of Scotland, upskilling people thanks to more than 330 training events.

One of the groups was award-winning Drumchapel Cycle Hub, led by Anne Glass, who organised led rides aimed at local young mothers in summer 2019. Among the women taking part in a ride to Bowling on the National Cycle Network 7 was Janet Kerr, who was trying cycling for the first time in decades:

“I’m quite proud of myself for coming along, I’ll definitely be back. I would like to get my own bike in time. I think it’s good not just for physical fitness but for mental health as well.”

As development officer Eileen Hamill explained, “A group like this is a lifeline for people who are isolated in the community and maybe wouldn’t be out exercising on their own.”

Drumchapel Cycle Hub riders enjoyed a trip to Bowling and back

With the coronavirus crisis, Big Bike Revival activities in Scotland had to be suspended from spring 2020. However, the team at Cycling UK were quick to refocus on helping key workers travel safely to work through the introduction of free cycle loans, services and repairs with almost 100 participating bike shops and projects around the country.

One of the key workers who was helped was Sarah McGregor in Edinburgh. Sarah received a free cycle service to bring her bike back to life after it was showing signs of wear from being stored outside. She was then able to use the bike to deliver medication and treatment to homeless people in temporary accommodation:

“It felt amazing to get back on the bike – I missed it when the bike wasn’t up to scratch. It can be difficult to get back in the saddle, but once you do you realise how much fun it is.”

Sarah with her newly serviced bike

As an organisation we have learned a great deal from the Big Bike Revival in Scotland over the last five years. We have taken the learning points and applied them to our exciting new projects which will help people move along the next stage of their cycling journey. We look forward to supporting many more people to make a habit of cycling for everyday journeys, encouraging a switch away from journeys by car and also lifting people out of transport poverty.

We will shortly be launching a new programme, Shift! It will focus on increasing the number of people cycling for short everyday journeys, support organisations to trial incorporating cycling into their service delivery and work with communities moving towards becoming 20 minute neighbourhoods.