A scheme to revitalise and improve the city centre of Wolverhampton threatens to close National Cycle Network 81 to two-way cycling, the main west-east route through the city centre and access to the railway station. It's open for consultation until January 2013 - tell the city council you object!

Having a cycle friendly city centre - from which motor vehicles were deterred - is one of the mainstay's of CTC's Cycletopia concept.

But Wolverhampton is proposing doing exactly the opposite.

Their plans are likely to cause huge problems for cyclists. Presently several streets permit cyclists to travel through 'pedestrian zones', however, under new plans, these will be removed and made one-way streets, with no contra-flow cycling.

This is a particularly problem for Wolverhampton because, as in so many other cities, the centre is throttled by a very busy, fast ring road which is extremely hostile for cyclists. In order to get from one side of the city to the other, most cyclists have to use the city centre streets to avoid the ring road.

It's better to cater for them from the outset with infrastructure instead of handing out £30 fixed penalty notices to folks trying to ride to work."

Scrapping permeability for cyclists in the city centre will lead to longer journeys - adding almost 1km to some journeys - and expose cyclists to more danger. The problem is focussed on three streets: Queen Square, Lichfield Street and Victoria Street. All three are becoming one-way bus corridors, which cyclists will also be able to use - but only in the direction of travel. Currently cyclists are permitted to use these routes two-way. 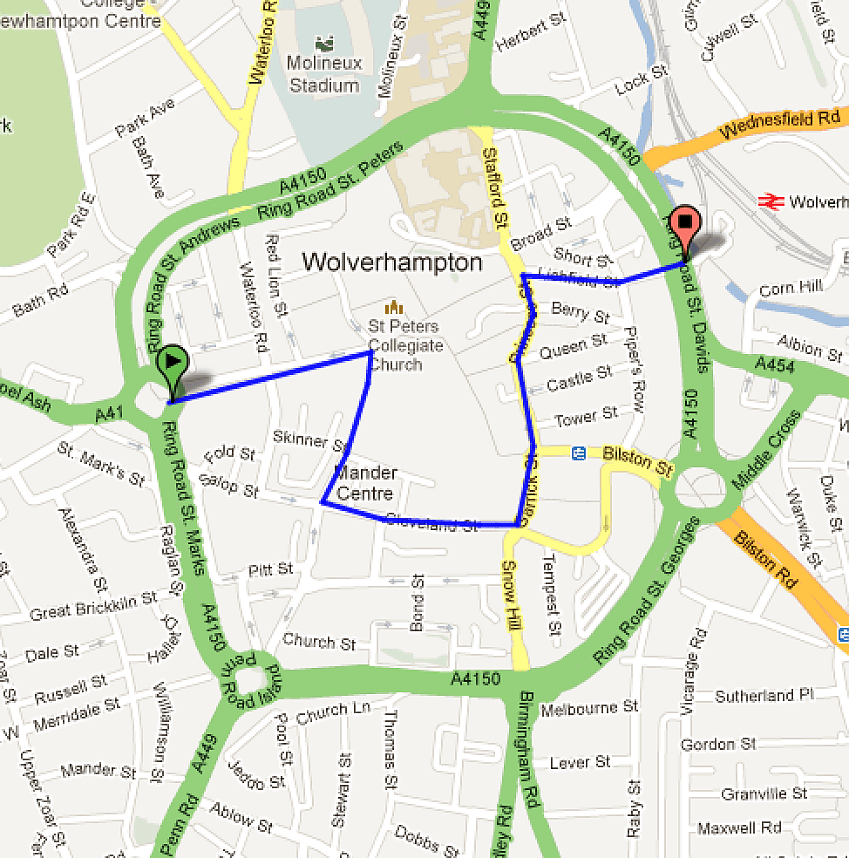 The west to east route is crucial not only because it links large parts of the city with the railway station: as the city centre is on a rising gradient, it is all the more important to give cyclists an easy, low traffic route to slowly climb the hill. The current, direct route involves a steady climb gaining 20m altitude across the city centre. The proposed route adds involves going downhill for 300m, only to have to regain all that height again!

Contra-flow cycling is crucial to improving conditions for cycling and could easily be fitted within this scheme, particularly since new regulations from Government permit a much simplified system of signing.

The plans do include contra-flow cycling for several of the streets, such as Market Street and Cleveland Street. But these don't help people who are travelling east. The public realm improvements are also supported by local campaigners, who acknowledge that it is important to make the city centre more attractive to non-motorised users, but don't want cyclists to be excluded.

Local campaigner David Holman, who represents CTC and campaign group Wolves on Wheels, said that if the plans go ahead: "people will cycle on the affected streets illegally because there is no other viable alternative." David has produced a briefing on the issue, which can be downloaded below.

CTC has written to members in the area urging them to oppose the plans. Please take the time to let Wolverhampton City Council know your views and respond to the consultation before January 25th 2013.