Unlock the fascinating history and breathtaking beauty of the ancient kingdom of Kernow on this 230km adventure ride around the tip of Cornwall.

The West Kernow Way starts in Penzance and links stunning coves, clifftop views, charming villages, mysterious moors, deserted back lanes and bewitching woods into an utterly unique and compelling story that stretches from the distant prehistoric to recent tales of tragic heroism.

The figure-of-eight format heads out to the most south westerly point of the UK mainland at Land’s End, then loops back down to the most southerly at Lizard Point. From there, it rolls north right across the Cornish peninsula to the historic mining heartland of Redruth before heading south again to finish at the iconic island of St Michael’s Mount.

While the tourist hotspots and main roads can be busy, the tracks and back roads that we’ve created this adventure mostly from are often totally deserted, letting you immerse yourself in the mystery and wildness of this rugged and proudly independent Celtic kingdom.

The trail’s challenging mix of testing gradients and varying surfaces make it perfect for gravel bikes or mountain bikes. The looping layout and plenty of suitable stopover points make it ideal for bikepacking over several days, or enjoying the three distinct sections in different stages. However you do it, you’ll be guaranteed a warm Cornish welcome and mouthwatering local food from a land that the archaeology tells us has been greeting visitors from the furthest corners of the known world since the Stone Age.

The West Kernow Way can also be combined with the routes radiating out from the Cycling UK EXPERIENCE hubs at Penzance and Helston to make the absolute most of your trip to the toe end of England. 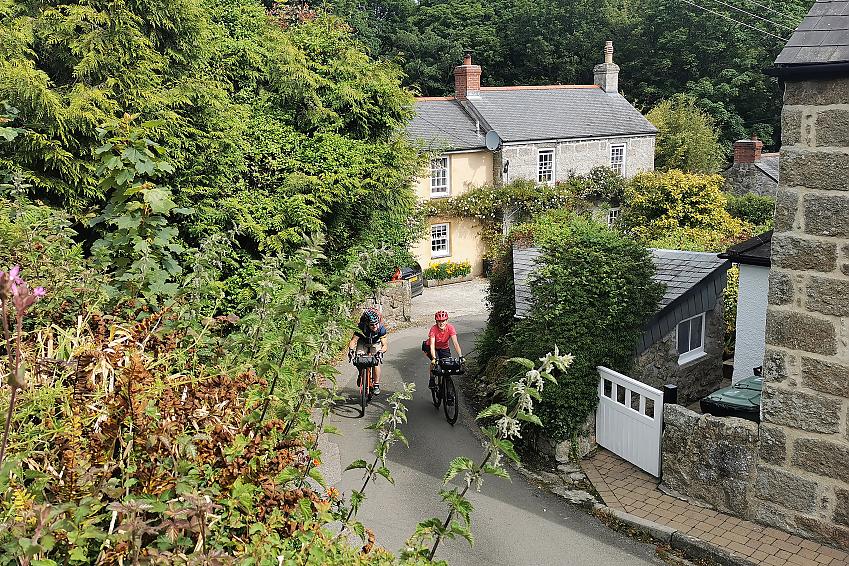 The West Kernow Way uses a mixture of quiet lanes, cycle paths and bridleways that vary from smooth grass to loose rock or narrow singletrack sheep trails over moors. Overall, we’d classify the route as a ‘blue’ difficulty rating using the off-road grading system (‘moderate’, suitable for people with some experience of off-road cycling, with some loose surfaces, ruts, roots, rocks and steep sections). However, there are some sections with a bit more technical difficulty, including some rutted singletrack on the eastern side of the Penwith Moors and a few loose rocky climbs which could have you off and pushing.

The rugged Cornish landscape inevitably means there are lots of steep climbs and descents along the way too, and we’d recommend attaining a good level of fitness (or some electric assistance) before starting if you want to enjoy it. The climbs are generally short though, so you can always push rather than pushing the pace, and most of the steepest parts are packed into the first half of the route.

The granite base geology of the Cornish peninsula and predominantly rocky bed of most of the trails means most of the route isn’t massively affected by bad weather. That said, some of the moorland and heath sections of Penwith, the Lizard and south of Redruth will become sticky and slower when wet, and there are a few short sections that were very wet and boggy even in June. You’re generally never far from an easier-rolling road alternative, however, particularly in the second half of the route where there’s a whole maze of lanes to escape onto. 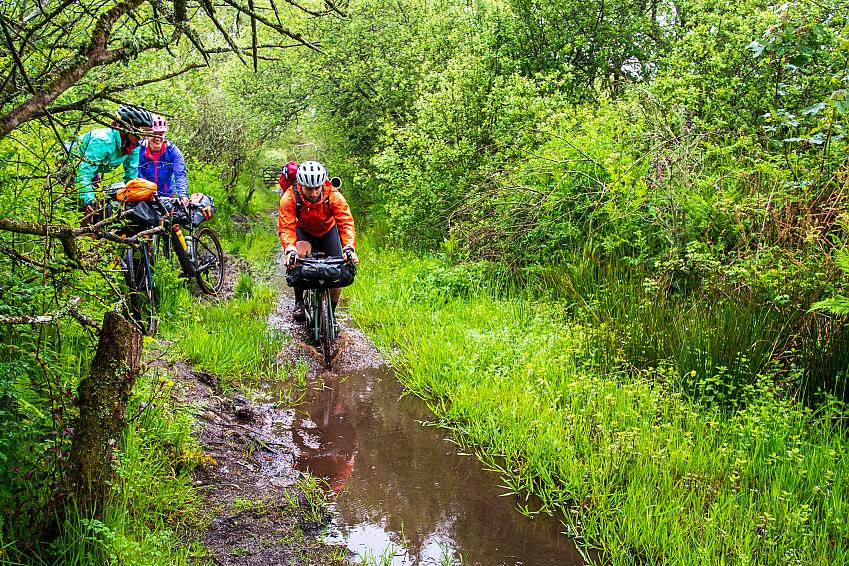 The amount of diverse off-road riding and the route’s challenging nature means you’ll need a suitable bike. A traditional touring bike with low gears will just about survive with care, but a gravel bike with 35mm or wider all-terrain tyres and wide ratio gears is the optimum choice in dry weather. As long as you’re prepared to be patient on the road sections, a lightweight hardtail mountain bike would be ideal for the off-road sections too, especially if the weather is likely to be against you.

An e-bike can be a blessing on Cornwall’s hills, but bear in mind the weight – there are a few rough stretches where you could end up pushing or carrying the bike. There is a wealth of stopping opportunities to recharge, as long as you plan ahead so you don’t run out of battery on a 25% climb.

Whatever bike you take, make sure it’s in good working order. Before turning up to Penzance, try out anything new to make sure it works. This applies to anything, whether it’s cycling shorts, tyres or a completely fresh bike.

While there are several bike shops en route, it makes sense to brush up your basic maintenance skills and take essential spares – tubes, pump, repair kit, multitool including chain splitter and a small bottle of chain lube – if only to avoid irritating interruptions.

Which kit to take obviously depends on your accommodation strategy, the season and how seasoned an adventurer you are. Be aware that while Cornwall enjoys relatively mild temperatures compared to the rest of the UK, it’s also wetter than average. The fact it sticks out into the Atlantic and the coast is never far away means that brutal weather can blow in with very little warning any time of the year. An extra warm layer and a weatherproof shell should be considered a minimum wardrobe requirement even in summer.

In terms of carrying kit, some of the more rattling, rougher or narrow trails will definitely suit strap-on bikepacking bags or a backpack better than traditional bolt-on racks and panniers. Whatever luggage you choose, make sure you trial your setup on appropriate terrain beforehand as there’s nothing more frustrating than having to stop repeatedly to fix bits back on or trudge back up descents to find lost water bottles. 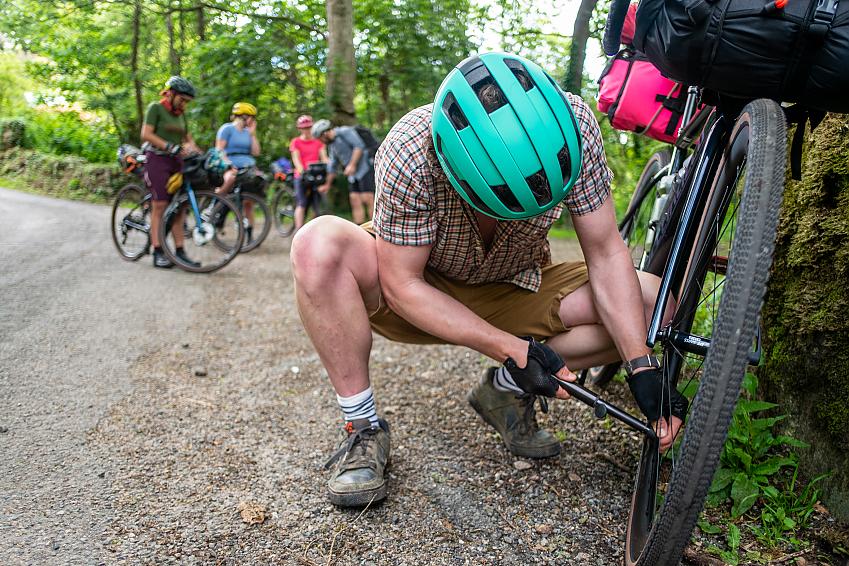 The West Kernow Way isn’t signposted and for most of the length there are no waymarked routes to use as a guide either. Even when you get to the mining trails around Redruth, there are often several to choose between at different junctions. That makes loading the route GPX onto a GPS computer with a decent resolution screen and background mapping a big help for staying on track. You can’t always rely on electronics though, so take a marked OS map (you’ll need OS Landranger 203 and 204) as a backup. There are also maps provided at the back of the printed guide to cover you for the more complicated bits.

Even then, it’s a complex landscape with a lot of 3D variation, so a small mistake can easily cost you a lot of effort. It’d be a shame to miss out on any of the interesting features and sights on the route, so we suggest you keep a very keen eye on your mapping rather than rushing along head down. 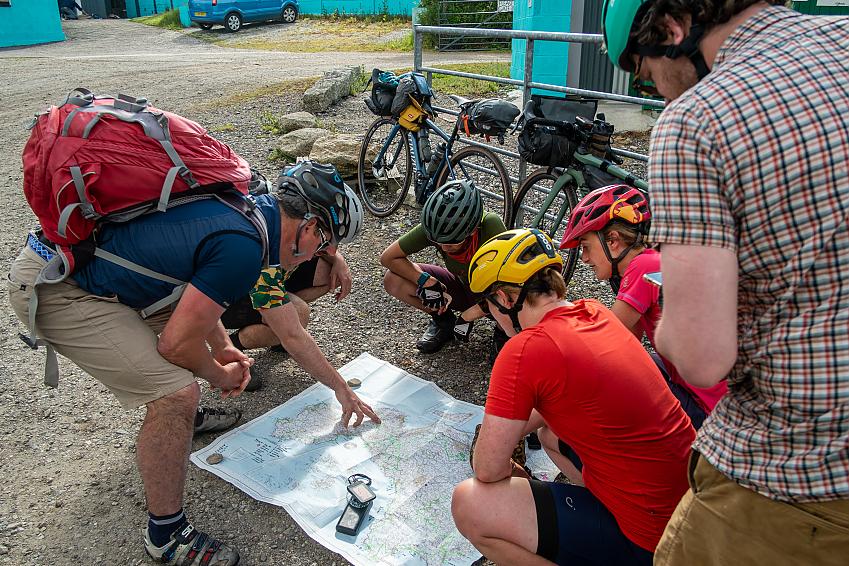 Our expert route planners have done an amazing job in creating a sense of adventure around the most wild and wonderful parts of Cornwall without undue risk. They’ve also kept exposure to busy traffic to an absolute minimum, making the most of barely used back roads and ancient byways for the vast majority of the route. We test-rode it and made a few changes before writing the guide, so you’ll find any potential hazards in each section flagged at the start of the relevant chapters.

Mobile phone coverage is good along the whole journey and you’re never more than a few kilometres from a road or village, even though it may seem like you’ve time-travelled into different millennia at some points.

Riding on or off road always has a level of risk though, and breaking your bike or yourself is never a good idea. Remember to always ride within your own limits and that of your equipment and if in doubt get off and walk – whether that’s at one of the few busy road crossings or on a challenging trail section.

The narrow lanes with their high banks and limited sightlines can sometimes be a squeeze, so go carefully around corners or down twisting descents and always keep an eye and ear out for approaching traffic. Flashing daytime lights can be a good idea on the hedgerow-shaded lanes.

Riding in a group is always safer as well as more sociable, but if you’re going solo we’d suggest using a ‘beacon’ style tracker on your phone or GPS so someone else can keep a virtual eye on you.

Finally but very importantly, you are responsible for the safety of any other trail users as well as wildlife, as this route crosses several nature reserves and Sites of Special Scientific Interest. Always slow down or stop and say hello, whether that’s to walkers, horse riders or farmers in their yards. Pick up litter, reduce your riding impact as much as possible (go through puddles not around them) and follow the Countryside Code. After all, while many of the rights of way on this route are currently very rarely used, this trail is likely to cause an increase. Let’s make sure that has a positive impact rather than being seen as a problem, to make it easier to develop further routes in the future. 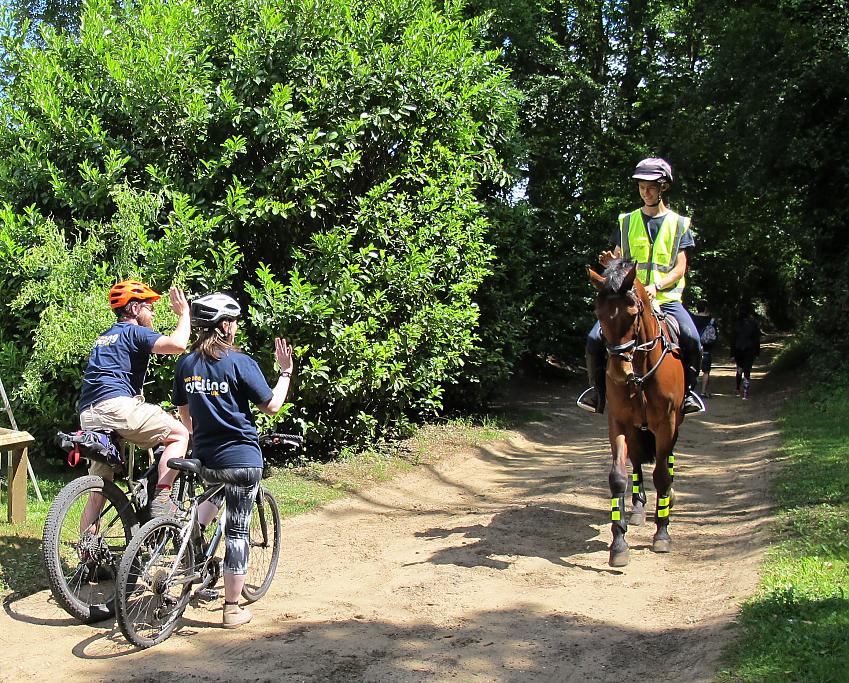 Top tips for a great ride

For some sections of the West Kernow Way, we have used 'lost ways' or historic rights of way to link together the best off-road options. For each of them, we have looked at the evidence for the existence of a right of way, and the physical suitability of the route, and assess that there is a strong case for the existence of an unrecorded missing link. Some of these are currently recorded as footpaths (crucially, section 56 of the Wildlife and Countryside Act confirms that recorded status is without prejudice to the existence of higher rights), and some aren’t on the rights of way map at all.

In other places such as the Lizard National Nature Reserve, we’ve worked with the National Trust and other land managers to find the best way for you to enjoy an area while reducing the ecological impact.

That means in a few places you might find the route advising you to ride what’s marked on a map or by signposts as a footpath, or asking you to push through a section on foot rather than ride it. Again, how we behave as riders will make a big impact on future access issues, so be the best ambassador you can at all times.