Whether it's riding more or allowing you to adjust the way you travel in work, a newly restored bike can make a huge difference, even if it's just so that you can keep pace with a sporty father. Cycling UK heard about some of the ways people in Essex are being helped.

Jay Pettitt and Jo Wheatley at Wivenhoe Bike Kitchen love a good bike-fixing project and have been busy in their workshop in recent weeks while NHS and other frontline workers have been caring for the elderly or those with declining mental health in their own homes or in hospitals throughout the coronavirus crisis.

Allie Passfield, a community healthcare assistant caring for ill people at home, will now be able to see many more of her clients by bike rather than car after being put back on the road last month.

Transport options were limited for Allie after a previous bike and a motorbike were stolen from outside her home, so she bought a second-hand bike for £30 online. Allie found the seat was too high, but the bike also needed a lot of TLC.

Jay then spent hours getting Allie’s bike operational again, including switching her broken cantilever brakes over to V brakes, servicing wheel hubs and the headset, replacing all the cabling, replacing a broken spoke and truing and dishing both wheels.

“The bike is now fantastic,” said Allie, who can’t wait for a new bike rack to arrive and is also planning a new paint job too.

Working with clients all over North Essex, Allie is using the bike for short journeys around the town but says once she has gear to carry, she will be able to put equipment in her car and then cycle between clients who are grouped nearby.

In order to care for others, you need to be fit yourself, which is where cycling helps.

She said: “I provide home-based care for people who are elderly, terminally ill or suffer mental health problems. It is a brilliant job as no day is ever the same, and the people are lovely. I have previously worked in hospitals and as an HIV/AIDS support worker, and I love the hands-on practicality of my current role. In order to care for others, you need to be fit yourself, which is where cycling helps.

”The pandemic has highlighted to me the need for comprehensive and safe cycle routes. While I am pleased to see families out and about, there have been a few hair-raising moments for me, when driving down country lanes to get to my next client. I've come across families cycling or walking, strung out across the road - with the youngest and most vulnerable child bringing up the rear. People seem of the opinion that country lanes are 'quiet', 'safe' and there is 'no traffic'.

With more and more people travelling to work as businesses emerge from lockdown, Cycling UK is campaigning for measures to help make cycling and walking safer as people return to work and shops begin to trade again. You can use the Widen My Path interactive map devised by Cycle Streets to identify areas local to you where pop-up cycle lanes, wider pavements or road closures could make a real difference and then use an editable template email to let your council know too. 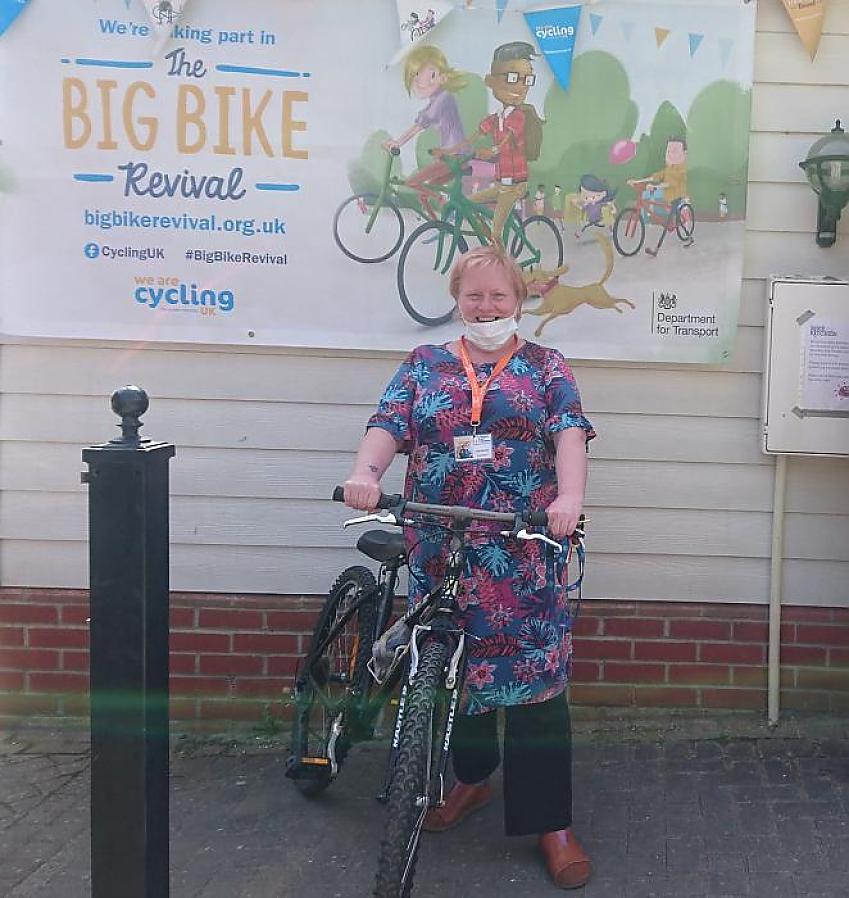 Allie Passfirled collecting her bike from the Wivenhoe Bike Kitchen

Michael McGivney who works as a case manager and registered mental health nurse in Essex says he has been inspired to push himself and ride further distances knowing his bicycle is in the best condition it has ever been in, following a full service.

He said: “The service at Wivenhoe Bike Kitchen was brilliant. I cannot thank Jo and Jay enough for their time and effort. I am over the moon with what they have done and the difference it has made is amazing. I will be using them much more regularly once things become more normal so my bike doesn’t get into the same condition again.”

Michael, who has worked in the NHS for the past 18 years, used to cycle to and from his work on office-based days, but says since lockdown he has been using his bike more for leisure purposes with family members.

“It has been a lovely experience spending quality time with family but more so for me in terms of finding a way to de-stress and improve my fitness at the same time. I used to cycle everywhere when I was younger and the past few weeks has reminded me of how much I love cycling,” he said.

He said he had already contacted some friends and hoped they would soon be able to ride together two or three evenings per week covering some on and off-road routes he had found in recent weeks: “I am really looking forward to it.” he said.

Another key worker the scheme has also been able to support is Thomas Upston, 24, who has been keeping essential supplies moving as a freight train driver based out of Ipswich station.

Thomas had his current bicycle for around three years but it had developed a problem with the left pedal, which a visit to Wivenhoe was soon able to fix.

In the past, Thomas said he had signed up for a number of 50km rides with his father, but was now opting for shorter rides more regularly, particularly in his time off.

He said his father was extremely active and was finding cycling was one of the best ways to keep in good condition with his usual gym classes on hiatus. “He is one of the fittest people I know. He was the one that talked me into doing events and rides before. He would sign up for things all over the place and ask me if I wanted to join in. He is so active it is unreal, he loves fitness classes and since lockdown its been tricky for him but he’s been going cycling and watching lots of exercise videos on YouTube," he said.

With his partner having just got a bike so they can go out together, Thomas says they will be fitting in rides around another member of the household: "We have just got a dog as well so this is another activity we can do together. Now at weekends we can go out for a ride and have a picnic, which is something we’ve wanted to do for a while."

He added: “I like cycling because its easier than running, and you can go out and explore places you have not seen before."