Bottoms up! Roland's collection will whet your appetite

Bottles and bicycles are the perfect match
By Roland Seber
Saturday, 6 June 2020

Bottoms up! Roland's collection will whet your appetite

Many cyclists are fond of collecting things. From whole bikes, to vintage jerseys, to badges and more. Cycling UK member, Roland Seber tells us how an accidental find nearly became an obsession.

We try and fight it, but I reckon there is a collector in all of us.

We often feel a little shy to admit it, but if someone makes the mistake of showing even the slightest interest in our collection, we launch headlong into a full explanation and history of it. Worst still, if the collection is to hand, we may show it off.

It can grip us with real fervour, even if it's just bits of paper - bits of paper that are elusive but rewarding when you track them down, as with my collection.

Where it all began 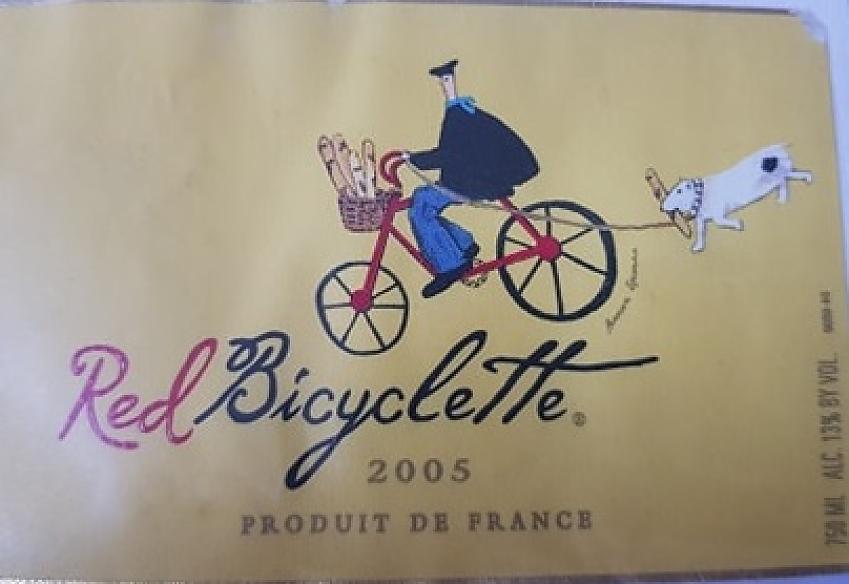 The label that started it all off...

It all started one Christmas, at a party held at the house of one my mountain biking friends.

The host had bought a bottle of wine called ‘Red Bicyclette’. The label - as you can probably guess - featured a picture of a red bicycle with a basket full of baguettes at the front, being ridden by a chap in a beret. Something about it inspired me to take the empty bottle home.

I never set out to start a collection, but it did start to follow me around.

The trusty supermarket just up the road came up trumps a few times, with tasty little numbers like 'Stone Road' - a Shiraz from France, and the supermarket's own-brand Australian red which, randomly had an upside-down image of a man on a bike on the label.
Another great find was the 'Cycles Gladiator' Pinot Noir. 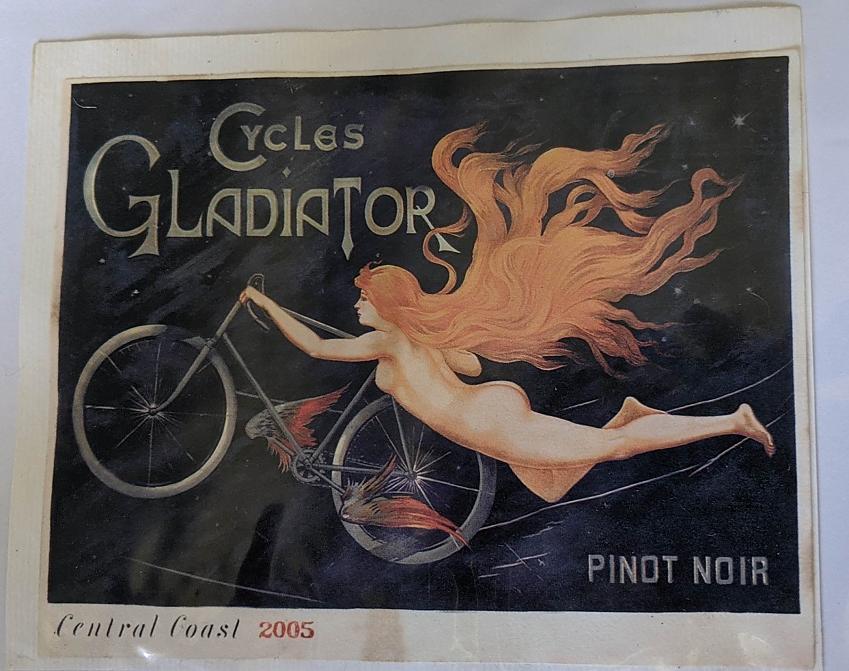 Getting a taste for it

It was less than a year since that first bottle, but I had a taste for it now - the wine and the collecting.

I was standing in the queue at a little shop near the cinema, buying some sweets to eat while watching a film, when I looked to my right. There, in front of me, was a bottle of 2007 'Beaujolais Rouge'.

It had no fewer than three bicycles on the label. A record for me at the time. I grabbed it just before reaching the till. 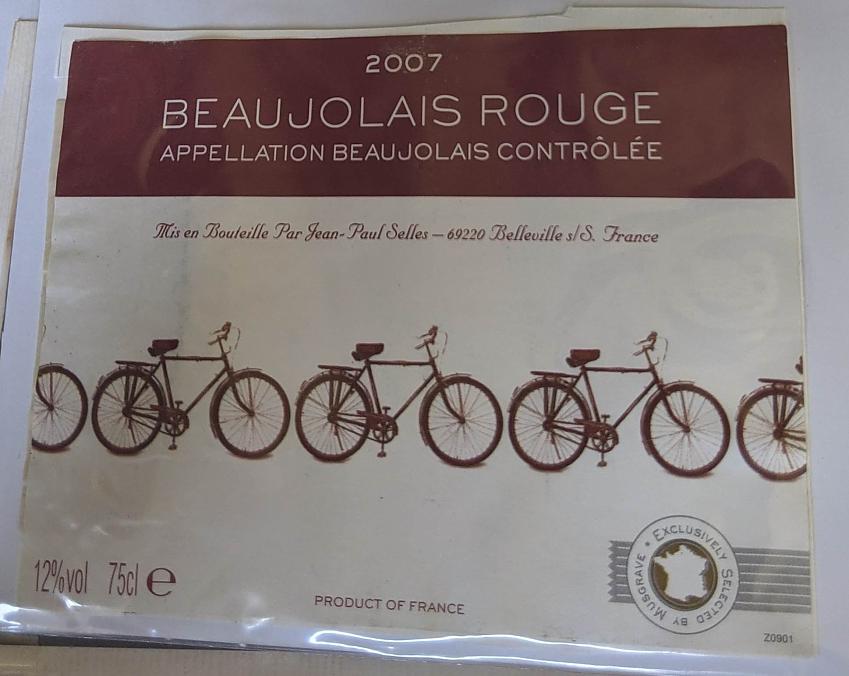 More additions quickly followed. Enough for a collage of bottle labels which would soon grace the wall in our downstairs loo.

Winter soon arrived, and Cycling UK was throwing its annual Christmas lunch. The office manager provided some wine. To this day I don’t know if it was a deliberate choice of tipple, but the wine was called ‘The Stump Jump’. The Specialized 'Stumpjumper' was one of the first mass produced mountain bikes to hit the shops in the mid to late Eighties. Coincidence? Maybe, but it had to go in the collection.

The collection inevitably branched out in other directions as other people got sucked in.

My wife, Julie chipped in with beer bottle labels like Singletrack magazine’s ‘Flowy Ale’ and ‘Hello Velo’ from the Wold Top brewery in Yorkshire.

The collection moves up a gear

After a slightly dry spell, I was on a roll in 2018 with a batch of unexpected bar finds.

I was with Julie at the London Bike Show for the Bike Biz annual awards, where she was up for ‘Woman of the Year’.

In a cabinet behind the bar, stood a bottle of 'La Maglia Rosa' from Italy - a Pinot Grigio, presumably issued to commemorate the Giro d'Italia - with a wonderful old bike featured on the label. 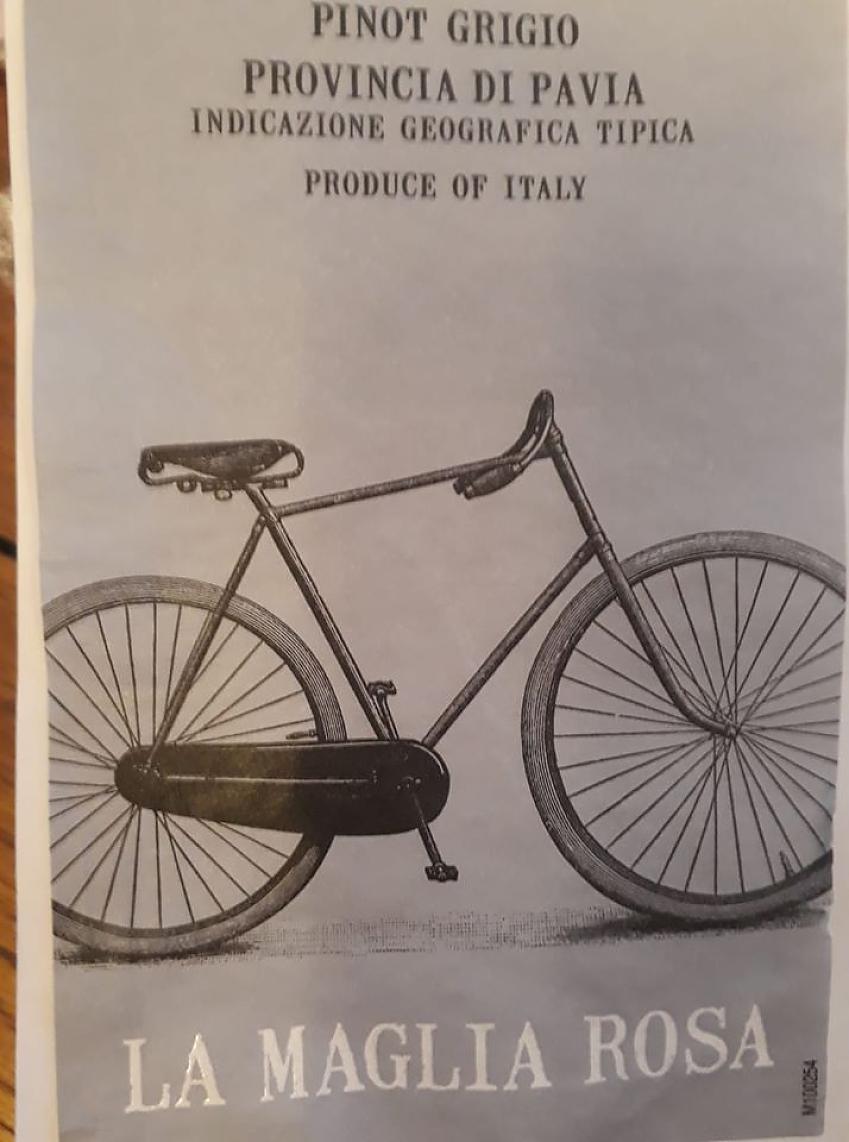 I don't know why it's not pink either

I asked if they had any empties, but no such luck.

In June that year at a reunion with three school friends, we were at the pub. Sat there behind the bar, was half a bottle of what I thought was the very same Pinot.

This time it was open, but none of us - uncharacteristically - were drinking at the time.

I casually mentioned my growing collection to the barman, who didn’t even feign complete disinterest. Not long before we left, however, he brought the empty bottle over to me - result!

My friends tried to pretend they weren’t with me for some reason...

The latest bar find was when Julie and I stumbled across a wedding last April, on a random weekday evening at one of our favourite country pubs.

We arrived around 9pm during a night ride and felt a bit out of place among the smartly dressed guests milling about in the bar.

The happy couple must have been cyclists, because one of the wedding wines was a La Vigneau Merlot, considered the French cyclist's greatest find, it featured a small but lovely image of a monsieur on an old fashioned bike - one of those with the bars swept back so far it looks like the rider has his hands in his pockets.

A brief conversation with the (riveted) barman secured an empty bottle to pop in my Camelbak.

2020 has seen some additions to the collection. ‘Summer Road’, a Grenache, featuring a cyclist who blends into the old vines so well you can hardly see him. 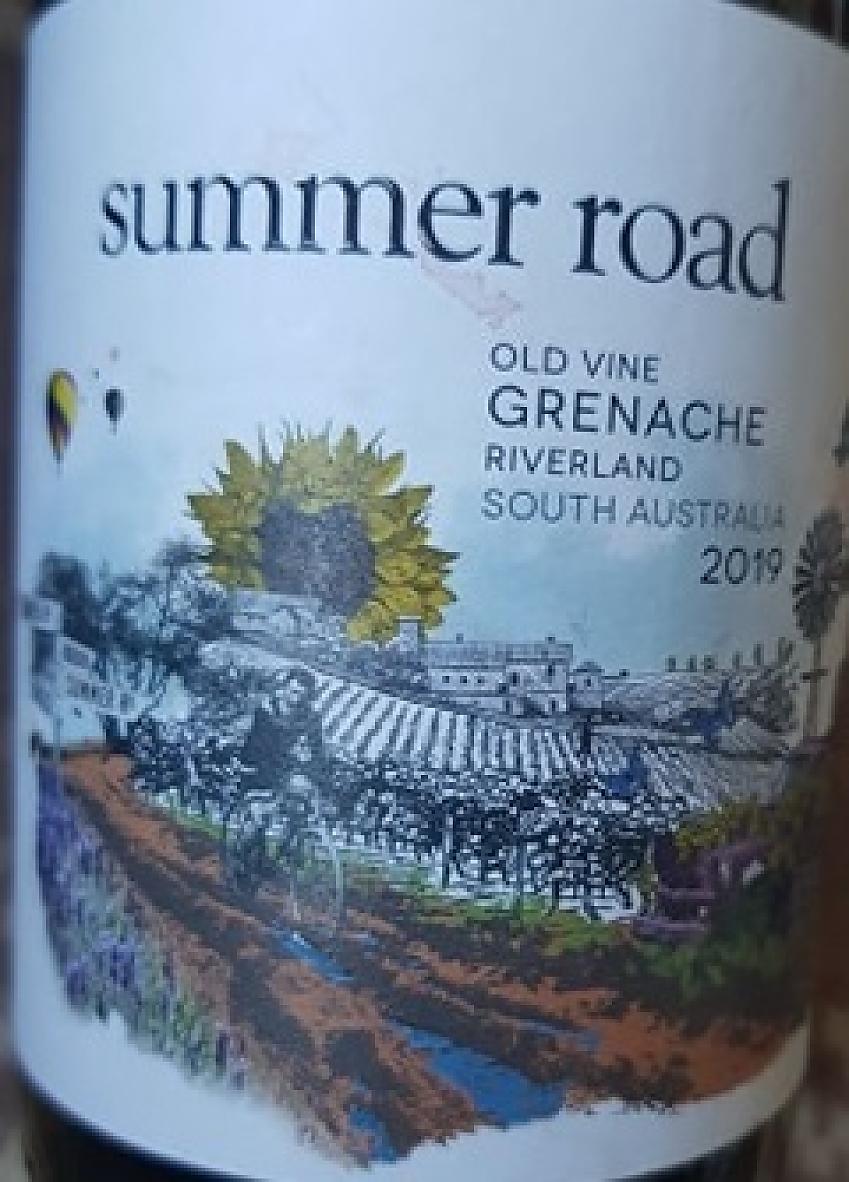 Can you spot the cyclist?

'Cono Sur', a Chilean Merlot included in a case from a wine delivery merchant, which was a welcome substitution for another wine I had ordered. 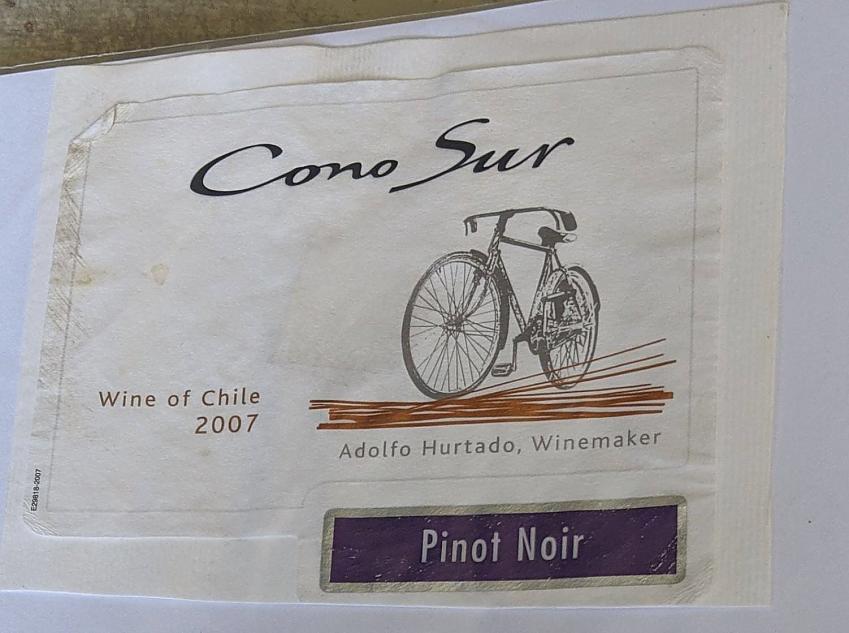 Another one bites the dust

Julie’s sister has always had a keen eye for a good bike-related present - she once gave me a very nice 2010 Margaux from Harvey Nichols with a delivery bike on the label.

Last year, she was on holiday with her husband on the Isle de Ré and picked up a bottle of red from a local winery for me. Being a popular cycling area, it featured a cyclist with bike on the label, a great find.

A month or two later and the wine still hadn’t been drunk. I was waiting for the right occasion.

Some time later, we'd arranged a holiday to the Semaine Federale in Cognac while guests stayed for a few days in our house back home in England.

Being a bit protective of my ‘nicer’ wines, I put the Isle de Ré wine and a couple of others in the shed and left some more expendable bottles in the rack for our guests.

When we came back from France, I went to the corner of the shed where they were hidden only to find that a snail had had a lovely wine label lunch - quelle horreur!

There was just one corner of the label left with about half a wheel visible. The ghastly gastropod hadn’t touched the labels on the other two bottles, only my precious bike label.

Still, I had a corner of it left to mount in the collage as a reminder: don’t be selfish with your wine. To make matters worse, we eventually enjoyed the wine but the bottle got thrown out by mistake, so I never even had the label corner.

To this day, I can’t remember the name of the wine or the maker.

The thrill of the chase

Now currently in lockdown, my collecting is on hold. Although online shopping is possible, it lacks the excitement of making a random discovery - which is after all, what it’s all about for me.

I’ve come to realise that whilst some people prefer to collect art or fancy cars, the vast majority of collectors do it for the fun, passion, and the thrill of the chase - as a pastime you can’t beat it. It definitely takes up less room and is cheaper than collecting bikes - which I have quite a few of, too.

Pour me another glass.

How to turn unwanted bike parts into Christmas gifts View