Spending Round "squandered opportunity" for cycling

Spending Round "squandered opportunity" for cycling

Today’s Spending Round for the year ahead left no extra funding for cycling and walking. Cycling UK's Senior Campaigns officer Sam Jones reports.

The focus, as expected, for today's Spending Round was on health, policing, prisons and education as trailed in the national press. On transport however, Cycling UK has not held back on expressing its disappointment.

Cycling UK Chief Executive Paul Tuohy said, “Today's Spending Round was a squandered opportunity that showed the Government's lack of commitment to protecting the environment and public health.

“We’re facing a climate crisis, an air pollution crisis, a congestion crisis and an inactivity-related health crisis. Getting more people out of cars, particularly for short journeys, is part of the solution to all of these crises, but this won’t happen by magic and by simply setting targets to increase active travel, when what’s required is a major increase in investment.”

Labelled a Spending Round which was “investing in the people’s priorities” by Chancellor Sajid Javid, health, adult social care, education and policing all received extra funding.

Cycling and walking campaigners were left disappointed, if not surprised, as when it came to transport only £200m for local buses was announced, part of a wider £470m transport allowance.

It became clear active travel was not one of people’s priorities as no new funding was announced by the Chancellor. Further scrutiny of the Spending Round document also shows no mention of these two green forms of transport. 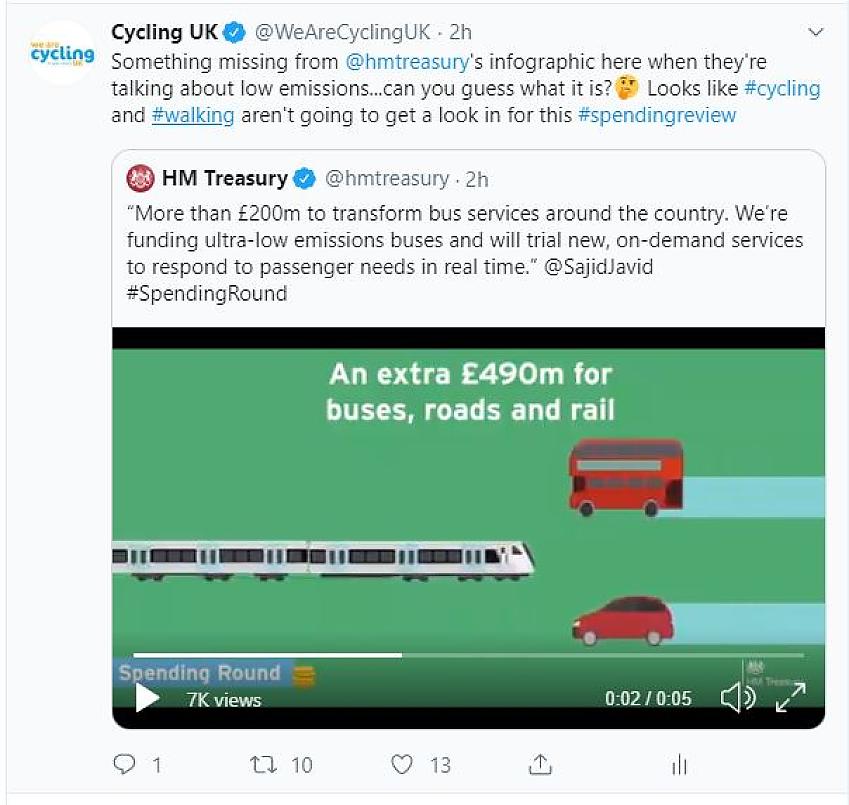 To add insult to injury, the infographic issued by HM Treasury on Twitter on the new funding seemed to demonstrate the current Government sees transport relating only to trains, buses and motor vehicles.

Currently, the Government claims funding for cycling and walking is £7 per person annually (outside London), but this will only take the Government a third of the way towards its target of doubling cycling.

While funding levels should not drop following the Chancellor’s announcement no department would face cuts over the next year, with all budgets rising in line with inflation.

When we needed a Green Spending Round focussing on the solutions to transport-related crises, we got the opposite.

The Chancellor's Spending Round announcement made much on the Government’s commitments to addressing environmental concerns with £250 million allocated to the international climate and environment funds and a further £30m for air quality. Mr Tuohy however was left distinctly unimpressed.

“When we needed a Green Spending Round focussing on the solutions to transport-related crises, we got the opposite,” he said. “Rather than spending to enable more walking and cycling, we got rhetoric about the challenge of de-carbonisation being real, an aspiration for greener transport and the promise of an infrastructure plan.

“This was a Spending Round that ducked the decisions and action needed to move from car dependency to more active travel and fix our environment. That will be the Government’ legacy from 2019’s spending decisions, unless they use the budget later this year to match rhetoric with action and drastically ramp up investment in active travel.”

Since Cycling UK and walking charity Living Streets’ joint funding campaign began, 11,464 people have written to the Department for Transport and Treasury calling on ministers to ensure adequate funding was not omitted from the Spending Review.

While their collective call was ignored, Cycling UK’s head of campaigns, Duncan Dollimore says now is not the time to be dissuaded but to get louder.

He said: “The Government doesn’t dispute the incredible benefits of investment in active travel, or that spending needs to be radically increased to meet its own modest targets to increase cycling and walking. Once again it’s jam tomorrow, with a promise of a new infrastructure plan, a budget later in the year, and a full spending review next year.

“Close to 11.500 people supported Cycling UK’s joint campaign with Living Streets and called for more money for cycling and walking. They wrote to their MPs and Ministers to repeat arguments that nobody within Government has disputed, because they can’t. But there seems to be a disconnect between accepting the arguments and approving the funding needed, so we’ll just have to get louder, because investing in active travel can’t be parked again.”

Funding for cycling: what’s next? View

How investing in cycling makes sense and makes money View