Potholes: the true cost to cyclists

Cycling UK continues to support the UK to cycle
This remains true during this difficult period with the ongoing threat of coronavirus Covid-19
Read our latest advice on cycling
Cycling UK is calling on the public to report potholes via Fill That Hole
By Sam Jones
Friday, 1 March 2019

Potholes: the true cost to cyclists

Pothole compensation claims are costing councils 25 times more in payouts for cyclists than for motorists, an investigation by Cycling UK has found.

Cycling UK findings confirm that while potholes can be an inconvenience for motorists, they are more likely to cause injury, and even death, for cyclists.

The charity which runs the pothole reporting webtool and app Fill That Hole, today (Sunday 03 March) published their research to mark the launch of Pothole Watch week (03 - 09 March).

The aim of the awareness week is to encourage the public to help cash-strapped councils by reporting road defects.

Potholes aren’t just an expensive nuisance, they are ruining lives.

“Cyclists are running the gauntlet when riding on British roads following a decade of underinvestment leading to the poor state they’re currently in,” said Cycling UK CEO Paul Tuohy. “Potholes aren’t just an expensive nuisance, they are ruining lives.”

The information was obtained by the charity through a series of Freedom of Information requests to 211 highway authorities across the UK. A total of 156 responded.

The charity asked about the amount of compensation paid out to cyclists and motorists, and the number of successful claims made over the five-year period between financial years 2013/14 and 2017/18.

It discovered that while the average compensation payout per motorist was around £340, councils paid on average £8,800 per cyclist for incidents involving potholes.

According to Department for Transport figures, published after a Parliamentary Question submitted by Cambridge MP, Daniel Zeichner, since 2007, at least 431 cyclists were killed or seriously injured on Britain’s roads.

The charity says its findings show the scale of the problem is much worse than those presented by casualty stats.

The vast difference in compensation payouts between motorists and cyclists demonstrates that the UK’s underfunded local roads are adversely affecting cyclists who are being killed or seriously injured due to defective road surfaces.

There was this instant when the whole bike jumped up. I was thrown up into the air and off the bike – the whole thing was a bit of a blur.

Stephen Greenham, an IT engineer at O2 from High Wycombe, ended up in A&E with a fractured wrist, bad bruising and road rash when he hit a pothole in Wooburn Green, Buckinghamshire in August 2018.

He said: “I was just cycling along the road and just starting to go downhill and beginning to pick up speed, when suddenly there was this instant when the whole bike jumped up. I was thrown up into the air and off the bike – the whole thing was a bit of a blur. When I hit the pothole I was travelling about 20mph.

The Asphalt Industry Alliance estimates after decades of underinvestment in the local road networks it would cost £9.3 billion to repair the damage on British roads.

Cycling UK is therefore using its inaugural ‘Pothole Watch’ to call on the Government to adopt a 'fix it first' policy, and invest part of its £25 billion Road Investment Strategy, which is currently ring-fenced for the building and maintenance of motorways and trunk roads, into repairing local roads.

“The Government is going to spend £25bn on maintaining and building new motorways, while effectively each year it finds some loose change for the problem of potholes on local roads,” said Mr Tuohy. “Cycling UK wants Government to adopt a ‘fix it first’ policy. Let's repair the local roads first - the ones we all use in our cars and on our bikes everyday - before building new motorways.

“Through Pothole Watch, I want to encourage the wider public to help councils by reporting potholes and helping them identify where the problems are – then they can start fixing them.”

The charity says councils should identify where their roads are deteriorating, not just so they know where repairs are needed, but also to assist in presenting a fuller picture of Britain’s pothole problem.

With many minor roads only assessed by road maintenance teams on an annual basis, there are vast stretches of potholed roads that councils are unaware of. Through Fill That Hole, which sends reports directly to councils, the public can help correct this.

Key findings over the five period include:

1.Cycling UK, the national cycling charity, inspires and helps people to cycle and keep cycling, whatever kind of cycling they do or would like to do. Over a century’s experience tells us that cycling is more than useful transport; it makes you feel good, gives you a sense of freedom and creates a better environment for everyone. www.cyclinguk.org

2.For further information on Cycling UK’s Fill That Hole go to: www.fillthathole.org.uk

3. For the Fill That Hole league table of highway authorities see: https://www.fillthathole.org.uk/league-table

7. According to Government figures, since 2007, 431 cyclists were killed (23) or seriously injured (408) due to poor or defective road surfaces. For further information on the number of people killed or seriously injured while cycling see Parliamentary Questions by Daniel Zeichner https://www.theyworkforyou.com/wrans/?id=2019-02-14.221721.h&s=daniel+zeichner#g221721.q0 and Catherine West https://www.theyworkforyou.com/wrans/?id=2018-02-22.129317.h

Campaigner and activist     Fill That Hole 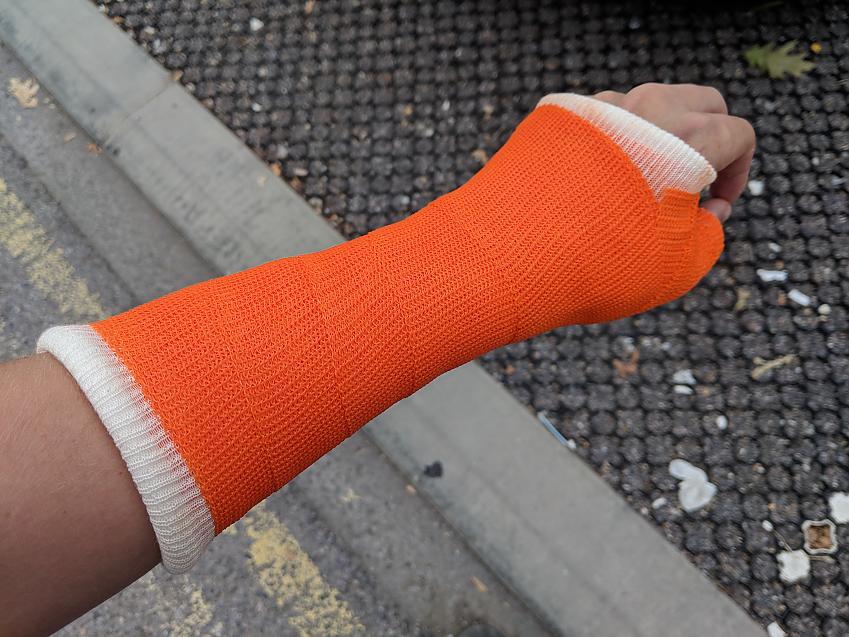 Stephen Greenham, an IT engineer living in High Wycombe, is a regular cyclist who hit a pothole in Wooburn Green, Buckinghamshire, August 2018.

Stephen had taken a diversion from his normal route due to an extended road closure in the area, so took another hill.

He had just begun to build up speed when he hit a pothole. Consequently, he ended up in A&E with a fractured wrist, bad bruising and road rash and his bike sustained £200 worth of damage. In his own words:

"I was just cycling along the road and just starting to go downhill and beginning to pick up speed, when suddenly there was this instant when the whole bike jumped up.

"I was thrown up into the air and off the bike – the whole thing was a bit of a blur.

"When I hit the pothole I was travelling about 20mph.

"The most pain at the time was in my ankle, but x-rays showed it wasn't fractured - but my wrist was.