Flo (age 10) enjoyed using the cycle lane on Upper Shoreham Road, saying: "I can just cycle to school without having to worry about the traffic." Photo: Shoreham-By-Cycle
By Sam Jones
Thursday, 25 February 2021

The UK charity says the removal of the cycle lane along Upper Shoreham Road in Shoreham-by-Sea is “irrational and unlawful”, and yesterday (Wednesday, 24 February) submitted an application for the council’s decision to be judicially reviewed.

At the heart of Cycling UK’s challenge is the council’s failure to consider the equalities impacts of its irrational decision to remove the cycle lane, ignoring the statutory guidance on the management of its highways network.

Following its introduction, the new safe route along Upper Shoreham Road swiftly proved its popularity for parents and children attending the three nurseries, three primary and two secondary schools in close vicinity to the lane. The cycle lane was also popular with commuters and residents.

“We used to frequently ride along the cycle lane, often joining another safe route travelling from Shoreham to Steyning, but we haven't since it was removed.

“I’m nervous about travelling along the Upper Shoreham Road without it. I'm not the only one. Parents are still taking their kids to school by bike but sometimes the children have to ride on the pavement as it is no longer safe without visible markings. I don’t understand why the council removed what had swiftly become a valuable community asset and hope they rethink their position.”

Such was the success of the Upper Shoreham Road bike lane that more than 30,000 cycle trips were made during its short lifetime, and it even featured in a government publicity video highlighting the community benefits of the new cycle lanes introduced during the pandemic.

Cycling UK says West Sussex CC did not consider the impact on young people when it decided to remove the cycle lane. Under the Equality Act, age is a protected characteristic, which in this case the council should have considered before making their decision..

The charity also points out evidence gathered by the council showed there had been no negative impact on journey times or increase in air pollution during the period of the cycle lane’s installation.

Despite the popularity of the route for Shoreham’s families and residents, and no evidence to support unsubstantiated claims the lane had caused congestion or traffic delays, an arbitrary decision was made to remove the lane by Councillor Roger Elkins, West Sussex CC's Cabinet Member for Highways and Infrastructure.

According to an FOI investigation, Cllr Elkins never visited the bike route. Justification for his decision appears to have been based on a small number of complaints about increased congestion. However these complaints are not borne out by the data gathered by the council.

The council decided to remove the temporary cycle route on 24 November, less than two months after it was officially opened on 25 September. It was removed over a period of several days in mid-January.

Currently there is no safe segregated space for the town’s residents along this busy stretch of road.

“When the council introduced this cycle lane, people soon changed how they travelled locally. Children began cycling to school, pensioners felt safe to ride into town and commuters started swapping cars and public transport for their bikes. It was a complete success story.

“Cllr Elkins’ decision to remove the lane a few weeks later without considering the evidence showing the lane’s benefits is contrary to statutory guidance. It demonstrates a fundamentally flawed process, which Cycling UK would argue, is both irrational and unlawful.” 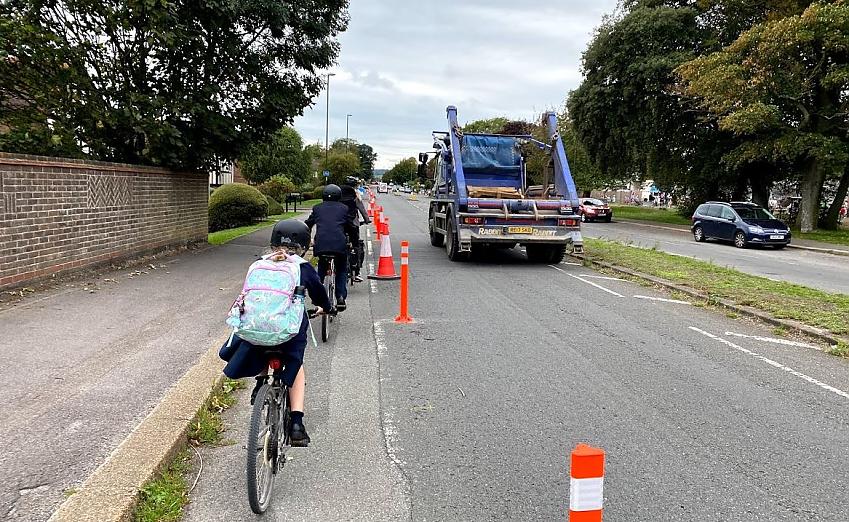 Young cyclists using the temporary lane on Upper Shoreham Road before it was removed. Photo: Shoreham-By-Cycle

Commenting on the benefits of the cycle lane along Upper Shoreham Road, Clive Andrews, a member of Shoreham-By-Cycle said:

"For a few weeks, the people of Shoreham-by-Sea had a taste of what it felt like to be able to choose safer, more protected journeys by bike, on this key route across our town. The pop-up lanes had quite an impact: doubling cycling levels, and in some weeks even trebling them. The project was helping our town to consider how a better future for local journeys may look – especially for children's journeys to school. WSCC's decision to remove the lanes came as a surprise, given the huge increase in cycle traffic, and the potential that was there to leave them in situ while options for longer-term changes could be explored."

"The news that Cycling UK has been looking at the legalities of this decision is really interesting, and we appreciate the efforts of Cycling UK in examining the implications of what's happened here in West Sussex."

Cycling UK is funding its legal challenge via its Cyclists' Defence Fund, and is concerned West Sussex CC’s actions could be mirrored by other local authorities under pressure from vocal minorities resistant to improvements in their communities.

“Despite the public’s enthusiasm for having safer routes to walk and cycle along, it is frustrating to see the admirable ambitions of some councils wither away at the first sign of criticism,” said Mr Dollimore.

“If councils decide to make baseless knee-jerk decisions with no evidence, then they need to realise there will be consequences. They should expect to be challenged, because such arbitrary and irrational decision making cannot be allowed to go unchecked.”

"Our client feels it has no choice but to bring this legal action because this issue goes to the heart of the use of the Government's Emergency Active Travel Fund and its policy decision to promote cycling for all the wider health and social benefits it brings.  West Sussex council's decision sets an extremely worrying precedent and one the Courts should examine closely."

For more information, please contact the national Cycling UK press office. Due to the restrictions caused by the coronavirus outbreak, currently the main press office number (01483 238 315) is not being monitored. If you would like to speak to a member of the press office during working hours (0900 - 1700) please call Sam Jones on 07967 193 051 or email publicity@cyclinguk.org. Out of hours, call 07786 320 713

What is the Cyclists' Defence Fund?

Cycling UK’s Cyclists’ Defence Fund helps fight significant legal cases involving cyclists and cycling, especially those which could set important precedents for the future and could affect the safety of all cyclists.

It is supported by clubs, members and individuals who have all made contributions to help ensure Cycling UK is ready to work on behalf of the wider cycling community when it's really needed, like it is doing in Shoreham-by-Sea

Timeline of events on the Upper Shoreham Road

Back to school – but not by bike in Shoreham View

Irrational and unlawful removal of a cycle lane: FAQs View

Budget reaction: Government “airbrushing out any role for cycling” in post-pandemic plans View