Cycling UK continues to support the UK to cycle
This remains true during this difficult period with the ongoing threat of coronavirus Covid-19
Read our latest advice on cycling
Cycling UK's new video shows the danger car doors can pose for cyclists
Tuesday, 2 July 2019

With all this summery weather, it’s hard to recall that Bike Week back at the beginning of June risked becoming a washout! Fortunately, many hardy groups weren’t put off from going ahead with their events whatever the weather.

To encourage more people to cycle, overcoming the barriers they may face is crucial. 40% of people are put off cycling because they fear car doors being opened into their path, which is why Cycling UK has launched a new Dutch Reach campaign to tackle car-dooring. You can get involved by helping to #TeachTheReach to people you know.

On the flipside, it’s always frustrating when simple measures to improve safety aren’t implemented. Despite widespread public support, MSPs rejected a proposal to reduce speed limits in urban areas in Scotland to 20mph, which could have saved lives.

If you live in London, you still have chance to show your support for 20mph in an ongoing consultation – and wherever you are, you can help the Queensbury Tunnel Society protect a vital traffic-free route for the future.

Over 500 people are injured every year in car-dooring collisions, and it can even be fatal. Yet 35% of drivers admit to not looking for cyclists before getting out of their car. There’s a simple solution: the Dutch Reach.

The Dutch Reach is a simple change of habit to help you open your car door safely, by reaching across to open the door with the hand furthest from the door. This naturally turns your body towards the window, helping you spot approaching cyclists.

Cycling UK has produced two films (virtual reality and standard 2D) showing why the Dutch Reach is so important, which in the first week have already been viewed over 10,000 times.

We need everyone to take part and to #TeachTheReach to their friends, families and colleagues - the more people learn the technique, the safer our roads become. Watch and share the video, speak to friends and family or take the PDF guide along to an event.

Be a Dutch Reach Hero and help us put an end to car-dooring. 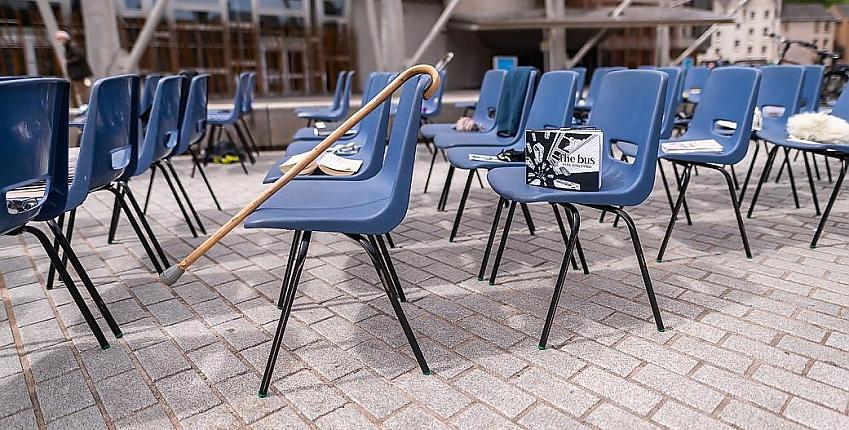 On 11 June, a coalition of active travel and environmental organisations including Cycling UK and Pedal on Parliament took part in a poignant demonstration outside the Scottish Parliament to support proposals for default 20mph limits on urban streets.

However, MSPs rejected the proposed bill, saying a ‘one size fits all’ approach would not be suitable. Cycling UK’s head of campaigns Duncan Dollimore called it a ‘huge opportunity squandered’ and asked what the Scottish Government plans to do instead, given that its target of 10% of everyday journeys being cycled by 2020 will not be met.

On Saturday 15 June London’s Coin Street community event space was filled with inspiring people from all over the country to celebrate their amazing efforts to get people cycling – including some fantastic volunteer campaigners.

Cycling UK member and long-time off-road campaigner, Ted Liddle has devoted hundreds of voluntary hours to creating long distance, user-friendly cycle routes in the UK and abroad. He created the Sandstone Way and many other routes in Northumberland and is currently working with Cycling UK on an off-road Land's End to John O' Groats project.

Cycling UK-affiliated off-road campaign group Ride Sheffield impressed the Awards Committee with its commitment to improving conditions for mountain bikers in the Sheffield area and its work on the 'Be Nice, Say Hi' campaign, which is now being rolled out by Cycling UK in other areas such as the Surrey Hills.

See the rest of the categories and winners. Many thanks to everyone who nominated someone – if you know someone who deserves recognition for their cycle campaigning, keep your eye out for next year’s call for nominations!

In the first public engagement of his new role, Michael Ellis attended Cycling UK’s Bike Week launch event and told MPs and cycling advocates that he is a ‘keen supporter of cycling and walking’ and agrees that active travel should become the norm for short journeys.

Painted cycle lanes are a waste of money, say cycling and walking commissioners 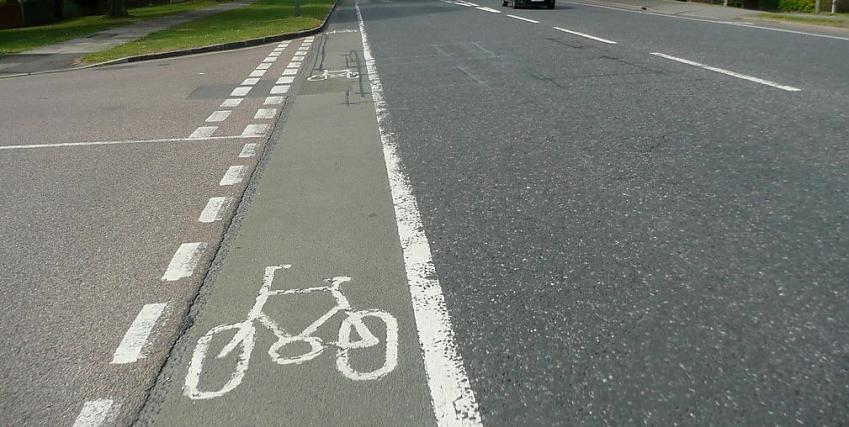 Britain’s cycling and walking commissioners, including Olympic champions Chris Boardman and Dame Sarah Storey, have written an open letter to the UK Government calling for dedicated funding for safe cycling and walking and minimum standards for cycle infrastructure.

This is reinforced by recent evidence that high-quality cycle infrastructure makes roads safer for all users, not just cyclists.

You can add your voice by using Cycling UK’s online tool to write to your MP asking them to support safer streets. 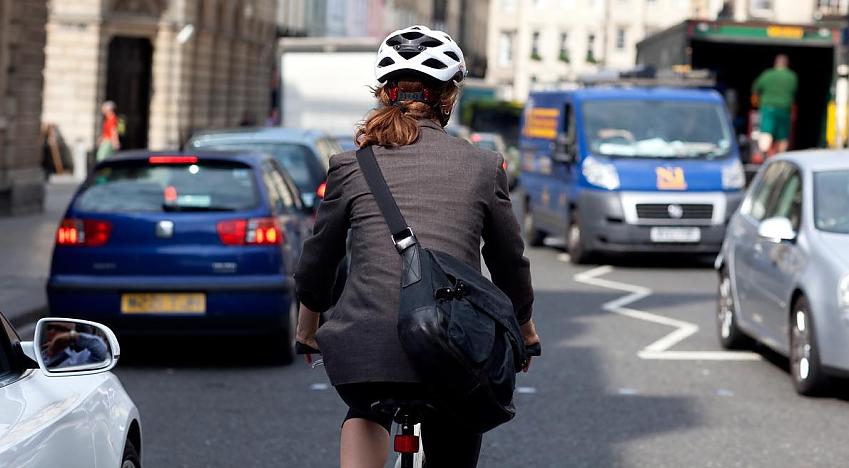 HSBC will remove the vast majority of its 700 staff parking spaces at offices in Sheffield and Birmingham, and invest £3 million on initiatives such as showering and changing facilities and secure cycle parking. 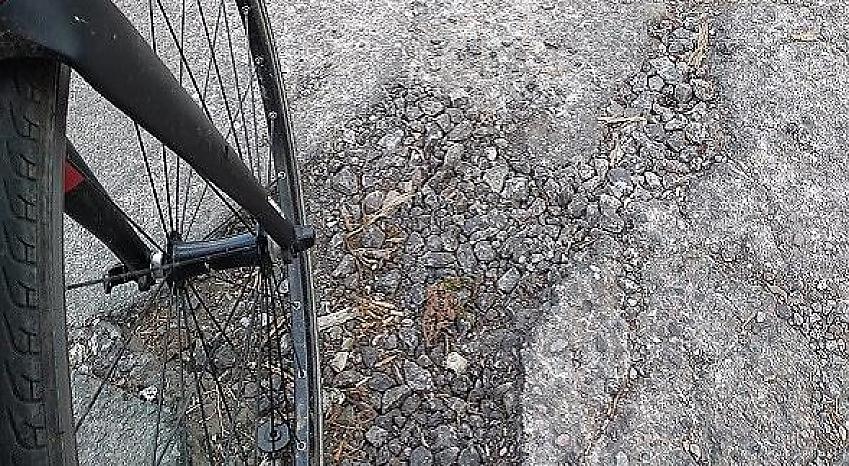 Not such smooth riding

A report by the House of Commons Transport Committee reveals the extent of deterioration of local roads in England and makes the case for long-term, ring-fenced funding to allow councils to plan ahead and improve the quality of our streets.

Welsh Government scraps M4 motorway scheme – could this be a new beginning for cycling in Newport?

Newport could be the next cycling focus in Wales

Committed campaigners persuaded the Welsh Government to do a U-turn on the M4 corridor scheme around Newport, which would have destroyed the Gwent Levels – a hugely important wildlife habitat and a popular area for recreational cycling. Cycling UK’s Roger Geffen explains how this money could be channelled into active travel.

Save Cut Gate appeal has reached its £74,000 target in the Peak District

A crowd-funding campaign to maintain a much-loved but heavily eroded trail in the Peak District has reached its fundraising target after nearly two years. Cut Gate is one of the best mountain biking routes in the area, but has been nicknamed the ‘bog of doom’ when it rains! Mountain biking advocacy groups Peak District MTB, Ride Sheffield and Keeper of the Peak began the appeal as part of the British Mountaineering Council’s Mend Our Mountains campaign, which brought walkers, horse riders and cyclists together to protect the fragile moorland on this iconic route.

New Transport Minister confirms his support for active travel at Bike Week launch event; Painted cycle lanes are a waste of money, say cycling and walking commissioners; HSBC cuts 90% of staff parking spaces to encourage people to cycle to work; Parliament report into local roads maintenance emphasises urgent need for more funding; Welsh Government scraps M4 motorway scheme – could this be a new beginning for cycling in Newport?; Save Cut Gate appeal has reached its £74,000 target in the Peak District

Queensbury Tunnel Society has been fighting to keep open the option to develop the tunnel in the future as a cycling and walking route, allowing funding opportunities to be looked at further instead of filling in the tunnel and extinguishing that hope.

Cycling UK supports Queensbury Tunnel Society's campaign to retain the opportunity to connect Halifax to Bradford and Keighley via a greenway, but time is running out.

The public consultation closes on Monday 15 July. If you agree that the option of a future active travel route should be retained, you can submit a response to the planning application via Bradford Council's website.

Transport for London are seeking views on proposals to lower speed limits to 20mph in central London to improve safety for people walking and cycling. Have your say.