As Pride Month has come to a close, we look at some of the highlights and launch our new video featuring a panel discussion with some of the leading lights in LGBT+ cycling groups.

This June, Cycling UK looked to increase diversity and the visibility of non-traditional cycling groups by supporting this year's Pride Month, when the LGBT+ community comes together across the globe to celebrate its achievements so far. It's also an opportunity to improve the attitudes of society and encourage further inclusiveness.

Cycling in the UK has traditionally been somewhat of a male-dominated activity and pastime, with little visible representation from groups outside of the traditional 'MAMIL' (Middle Aged Man in Lycra) stereotype.

Cycling UK is seeking to change this by focusing on diversifying our volunteer network so that people from all walks of life are able to feel comfortable and included and able to enjoy the wonderful benefits that cycling offers.

This means championing groups that provide a positive welcome to people from underrepresented communities, such as those who are of a BAME (Black, Asian and Minority Ethnic) background, LGBT+ community, younger people, women and others. 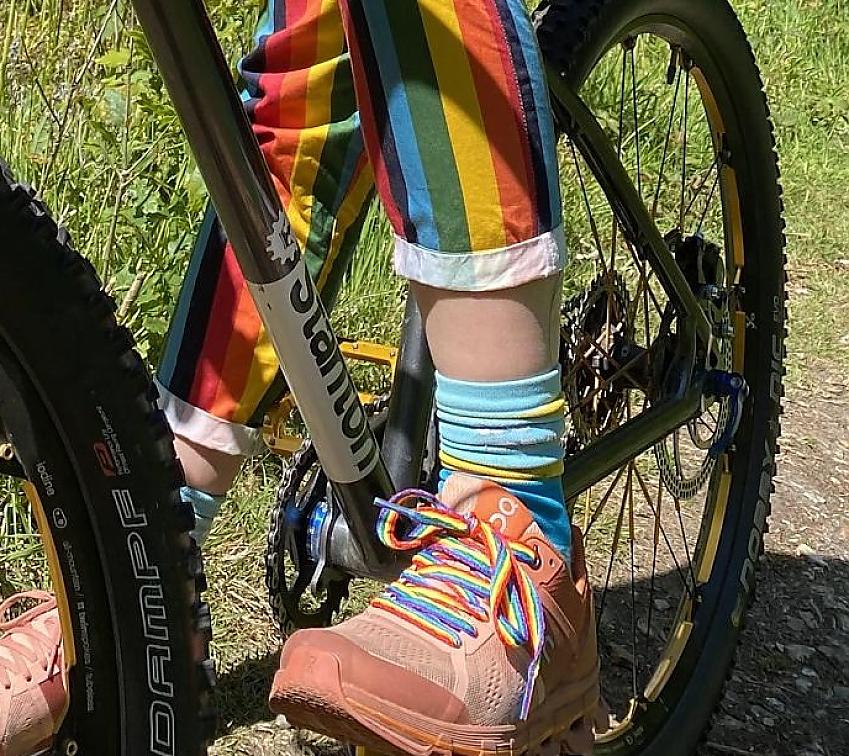 The LGBT+ community is one such group. This year, we started with showing support for the International Day Against Homophobia, Transphobia and Biphobia on Sunday 17 May by distributing free rainbow laces to some 100+ of our volunteers.

The initiative was a great success, despite some negative comments on social media, with head of volunteering Alex Cuppleditch saying: "The Rainbow Laces campaign overall has been a massive step forward and success for Cycling UK as we are working towards diversifying of our network and therefore cycling. This will be the start of many targeted campaigns around diversity and providing a cycling avenue for humans across the board."

We have also been supporting various other events over the past few weeks to demonstrate our commitment to bringing about LGBT+ inclusion in cycling: 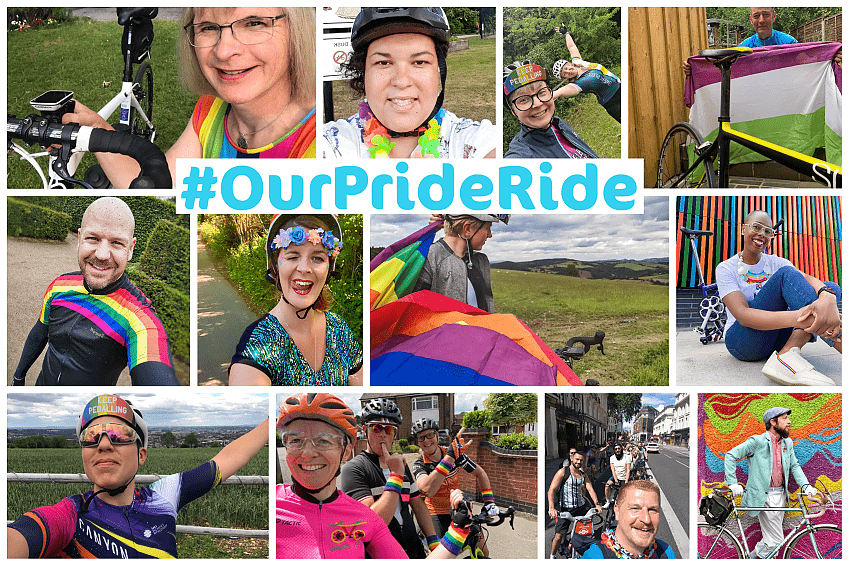 Following on from the Rainbow Laces campaign, which we ran in support of Stonewall, one of the leading charities for LGBT people in the UK, we encouraged cyclists to take part in Our Pride Ride on Saturday 13 June and show their support for the community by cycling solo or in small groups sporting rainbow colours.

The brainchild of longtime Cycling UK supporter, author and adventurer Emily Chappell, the event attracted hundreds of riders from all over the country, with many of them sharing their images on social media, including several famous cycling faces such as Ned Boulting and Jools Walker.

The event was also supported by Richard Hearne, founder member of PRiDE OUT, a Cycling UK-affiliated LGBT group based in the Manchester area. He said: "LGBTQ+ cycling has been the 'poor relation' in the sports world for a long time in my view. But the inaugural Pride Ride showed just how much demand and appreciation there is for a friendly and welcoming group to cycle with, regardless of how someone identifies or who they love." 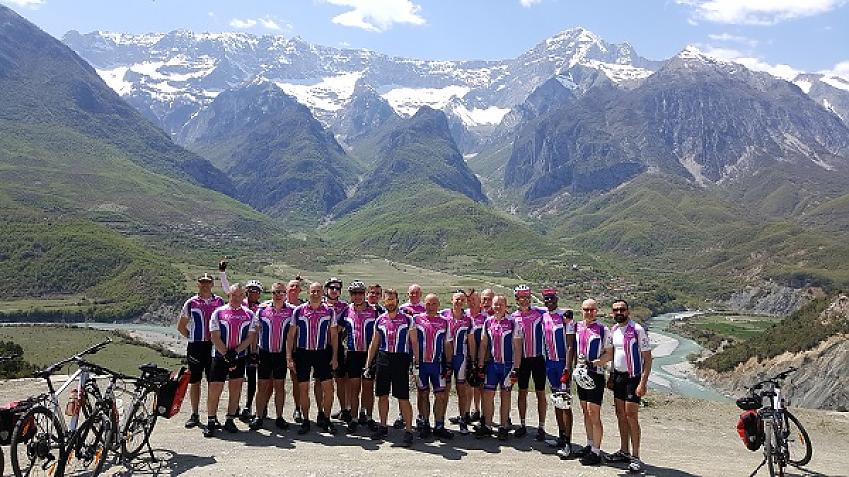 CycleOut London on a tour of Albania

Such was the success of these events, that we decided to bring together some of the leading figures in the LGBT+ cycling movement for a video conference with head of volunteering Alex Cuppleditch to discuss some of the issues they've faced and their reasons for setting up groups targeting a specific section of the community. Taking part were:

The reasons for starting an LGBT group

These varied amongst the panellists.

There is the issue of having the comfort of being with a community that can support you through issues, even simply day-to-day matters.

Richard said that he tried riding with more traditional cycling groups but feared awkward questions around his personal life and potential homophobia, so decided to start his own.

Nasser, who is of Middle Eastern heritage and has a Masters in Environmental Engineering, said: "The club was founded 25 years ago during less liberal times when members needed more privacy and had more to lose, thus being with like-minded people mattered. Although this has changed since then and we are in better place now, there is the issue of having the comfort of being with a community that can support you through issues, even simply day-to-day matters like dating a same sex person, to make friends who have a better understanding of similar relationships, family attitudes, work challenges  and so on. These, despite best intentions, are not easily understood by a non-LGBT+ person."

Nasser continues: "The group joined Cycling UK as we are keen cyclists and like to be part of the big picture. Moreover, being with cycling bodies like Cycling UK provides us with plenty of guidance such as during the pandemic, resources, opportunities and even practicalities like insurance and so on. Cycling UK can provide the exposure for clubs like ours so the community and avid cyclists of all background are aware of our availability."

Meanwhile, Willoughby, who worked at Brixton Cycles bike co-op for 12 years, started the group with a completely different remit: to use bikes as a tool to empower the community and address systemic inequalities in active travel. The group, which was only created in September last year already has about 80 members, including some who are economically disadvantaged and/or unconfident as cyclists.

Willoughby believes the LGBT community will always need safe and separate spaces for cycling, whereas Nasser thinks that in the long-term there shouldn't be a need for this, citing parts of Europe such as the Netherlands and Scandinavia where all communities are fully integrated so there is no requirement for specific groups for different people.

Richard, on the other hand, is looking to expand the PRiDE OUT movement into other towns and cities in the UK.

It is hoped that the #OurPrideRide can become an annual event, which Cycling UK will continue to support.

The full discussion is now available on the Cycling UK YouTube channel.

Cycling UK is proud to support cycling groups that welcome riders from all sectors of the community, and will be holding more discussions and events in the future to enable more people to take up cycling, helping to break down barriers and increase the visibility and normalcy of such cyclists.

Keep an eye out for details of our forthcoming Volunteer Celebration, which will be held virtually on the weekend of 3-4 October, and will feature workshops and activities centred around increasing diversity within cycling.

We also have a LGBT group cycling page which we will update as required.

If you know of any other LGBT groups or initiatives around the UK that would like support and information from Cycling UK, or if you need help setting up your own, please get in touch.

LGBT+ Group cycling and volunteering View
You too can champion cycling in the UK
Give your support today to help Cycling UK’s charitable work tomorrow. We double every pound you give through other sources to help change lives and communities through cycling.
Volunteer now