A former homeless man who overcame a life of crime, addiction and mental health issues; a woman who learned to cycle at fifty, and a ten-year-old boy who thought his condition would stop him ever learning to ride a bike, have all been awarded the UK’s first “Real Yellow Jersey” for cycling excellence.

Ten jerseys, handknitted in Tour de France yellow, have been presented to people who’ve used cycling to change their lives and inspire more of us to ride our bikes.

Martin Williams, 45, from Birmingham was living on the streets, addicted to drugs and suffering from anxiety and depression before cycling helped him turn his life around.

He took part in Cycling UK’s Big Bike Revival scheme which aims to help people overcome the barriers stopping them from cycling, such as a lack of skills, financial hardship, disability, cultural background or health issues. 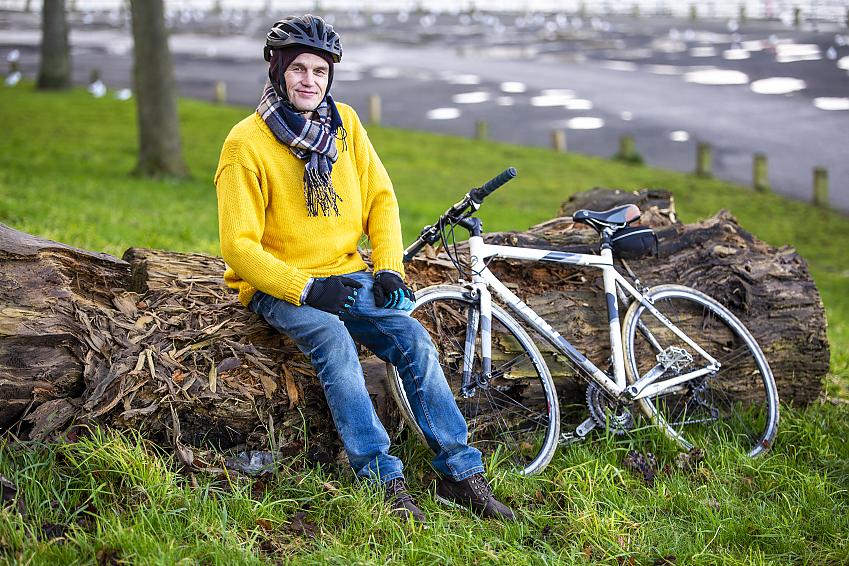 Martin has learnt cycle mechanic skills and now teaches others. He’s in accommodation and has been clean for the past 18 months and through his volunteering work feels like he now has purpose, motivation and a positive outlook for his future.

He said: “Cycling has transformed my life, really helping my mental health, but this yellow jersey is the icing on the cake. I’ve never won anything before.”

Joy Anibaba, 55, from the West Midlands only learnt to ride in her 50s and has since become a ride leader inspiring and empowering other women to cycle more.

She said: “It’s wonderful to be honoured in this way. I’m proof that if I can do it, anyone can. I never thought I’d get a yellow jersey, especially one so warm and beautiful!”

Declan Nangle, who’s ten and from Kidderminster, didn't think he'd ever be able to ride a bike because he suffers from dyspraxia, a developmental disorder that makes coordination and balance difficult.

He’s now cycling every weekend after being given a bike for his 10th birthday and learning to ride through the Big Bike Revival. 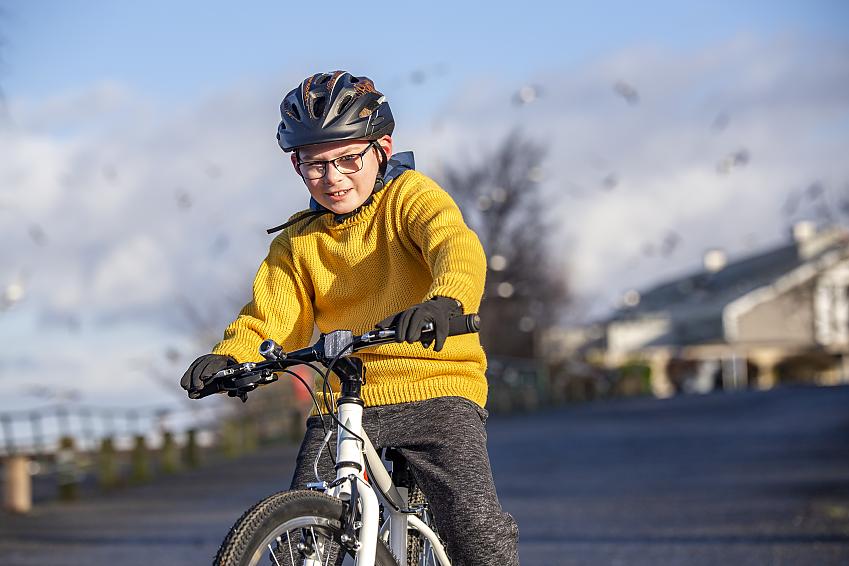 Declan learned to conquer his fear and is now a confident cyclist. Photo Rob Spanring

Declan said: “When I first started riding a bike I was a bit scared about crashing, but that’s something I don’t have to worry about now. You learn to overcome your fear.”

When I first started riding a bike I was a bit scared about crashing, but ...you learn to overcome your fear.

Jenny Box, Head of Behaviour Change in England, said: “We wanted to celebrate all those amazing people across the country who are getting back on their bikes, changing their lives and helping others to do the same.

“They’re the real heroes of cycling whose skills, commitment and personal journeys are helping the nation reap the benefits of two wheels.

“The Real Yellow Jersey is also a symbol of everything that’s to be celebrated about everyday cycling and an encouragement for more people to get in the saddle.” 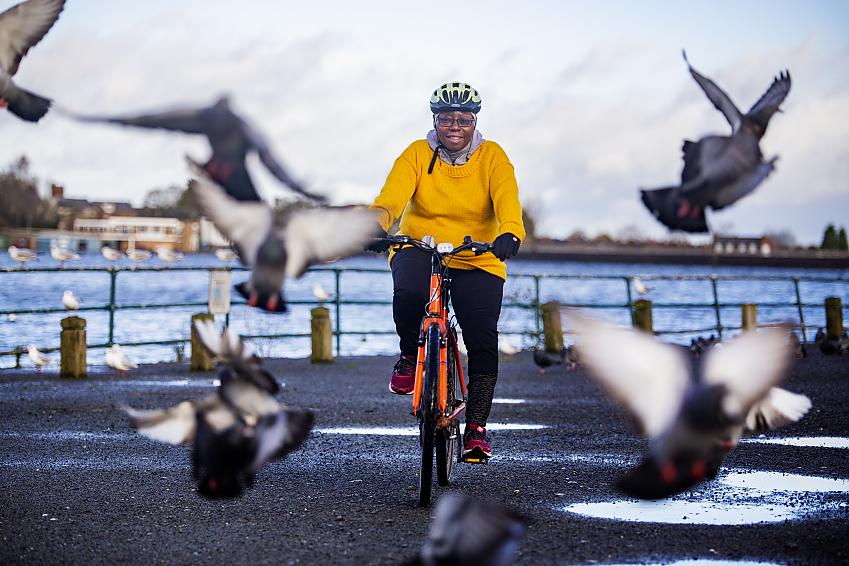 "I’m proof that if I can do it, anyone can. I never thought I’d get a yellow jersey" Joy Anibaba. Photo Rob Spanring

In the Tour de France, the yellow jersey has been worn by the overall leader since its introduction to the race 100 years ago in 1919. It is an iconic sporting symbol recognised throughout the world and held by only eight British riders in the tour’s 116-year history.

But Cycling UK’s Real Yellow Jersey recognises that cycling isn’t just about sport; it’s an everyday activity for leisure, transport and health, and part of a solution to many of society’s biggest problems from climate change and air pollution to obesity and mental health issues.

Each ‘jersey knit’ garment took eight hours to complete. Created in canary yellow they are a stylish symbol of real cycling excellence.

Chris Boardman, policy advisor for British Cycling, won three stages of the Tour de France and wore the yellow jersey on three separate occasions. He said: “The Real Yellow Jersey for the everyday heroes of cycling really shines a light on how cycling can turn lives around, improving health, fitness and wellbeing and I applaud all the recipients for their achievements.”

The Real Yellow Jersey for the everyday heroes of cycling really shines a light on how cycling can turn lives around.

Former professional cyclist, Sean Yates, who wore the yellow jersey in 1994 and played a pivotal role in helping Sir Bradley Wiggins become the first Briton to win the Tour de France in 2012.

He said: “The yellow jersey in the Tour de France remains the ultimate symbol of cycling sporting success. So it’s fantastic to see ten inspiring individuals from all walks of life honoured with their own yellow jersey recognising how cycling can make such a massive difference to people’s lives.”

More than 70 per cent of the UK population admit they never cycle even though the benefits are well-documented.

People who cycle regularly in mid-adulthood typically enjoy a level of fitness equivalent to someone 10 years younger and their life expectancy is two years above the average.

Meanwhile, the NHS is spending more than £6 billion a year on obesity-related illness; transport accounts for 33 per cent of carbon emissions in the UK and drivers are losing £7.9 billion every year because of traffic congestion.

Currently, 57% of car journeys in Great Britain are under five miles, which Cycling UK says could be cycled.

The Big Bike Revival started in 2015 after Cycling UK discovered there are an estimated 16.6 million unloved and unused bikes languishing in sheds and garages around the country, and that most people just need a little help getting back in the saddle.

It provides free maintenance sessions to get people’s bikes back into working order, organises group rides and skills sessions to help people build up the confidence to ride.

Martin, from Birmingham was homeless, living on the streets, taking drugs and suffering from anxiety and depression before being put in touch with the Big Bike Revival group, New Roots. Over the last year he has learnt cycle mechanics skills and now teaches others. Martin is now in accommodation and has been clean for the past 18 months. He volunteers at New Roots five days a week and now feels like he has purpose, motivation, and a positive outlook for his future.

Joy, 55 from Olton in the West Midlands learnt to ride at 50 and joined a Big Bike Revival cycling group two years ago. Since then she has become the Club Secretary and a ride leader and she has been a key figure in the growth of the group, inspiring and empowering scores of others.

Ten-year-old Declan, from Kidderminster, didn't think he'd ever be able to ride a bike because he suffers from dyspraxia. Dyspraxia is a developmental coordination disorder that makes coordination and balance difficult. This summer however, thanks to the Big Bike Revival he’s learnt how to ride, is now cycling every weekend and is even a cycling holiday. 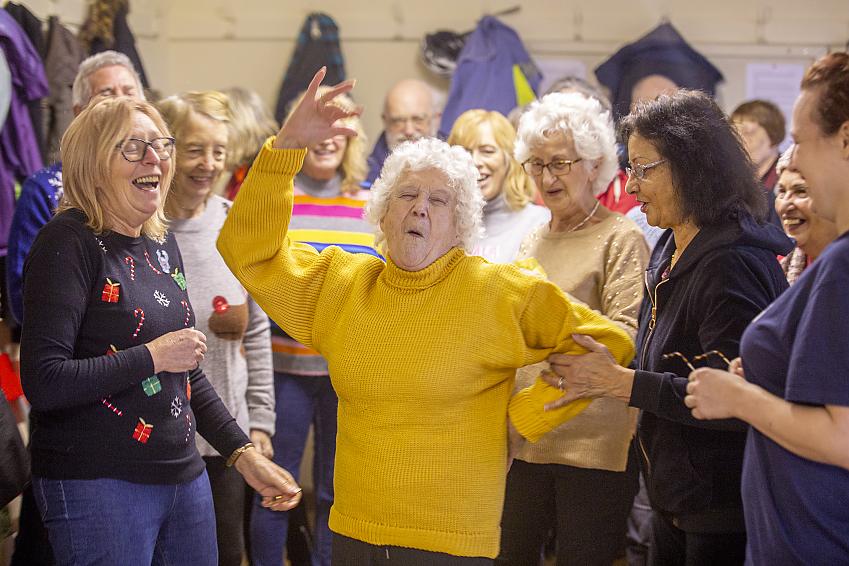 Senior speedster Joan, from Walsall in the West Midlands, recently took up cycling after a break of 65 years! Now in her mid-80s, Joan decided that she needed a challenge and so took part in a Cycling UK Big Bike Revival event. Following one-to-one tuition and advice on which bike to choose, Joan is now a regular cyclist.

Janet and her twin sister Margaret, from Harrogate, Yorkshire, began cycling when they were 11, after 40 years cycling together Margaret sadly died in 2004. Janet couldn’t even look at her bike for years but thanks to the Big Bike Revival she is back in the saddle and full of renewed enthusiasm. She’s now encouraging her friends to get on their bikes and campaigns for more cycle routes in her local area. 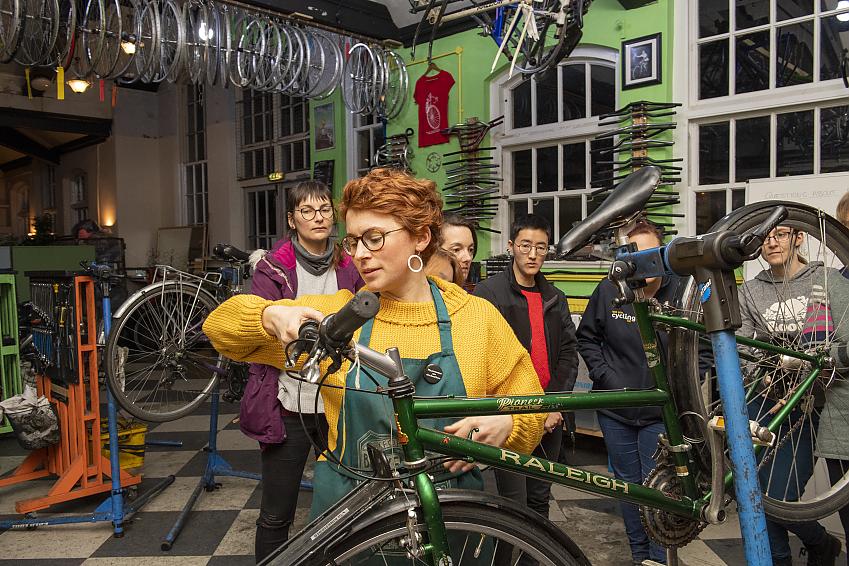 When Caitlin began cycling, she found many cycling spaces and bike shops intimidating. She felt like she had to pretend to know more than she did to avoid being patronised. Caitlin then found the Big Bike Revival group Beryl's Night and is now a qualified mechanic working at a community organisation that teaches women and trans people about cycle maintenance. 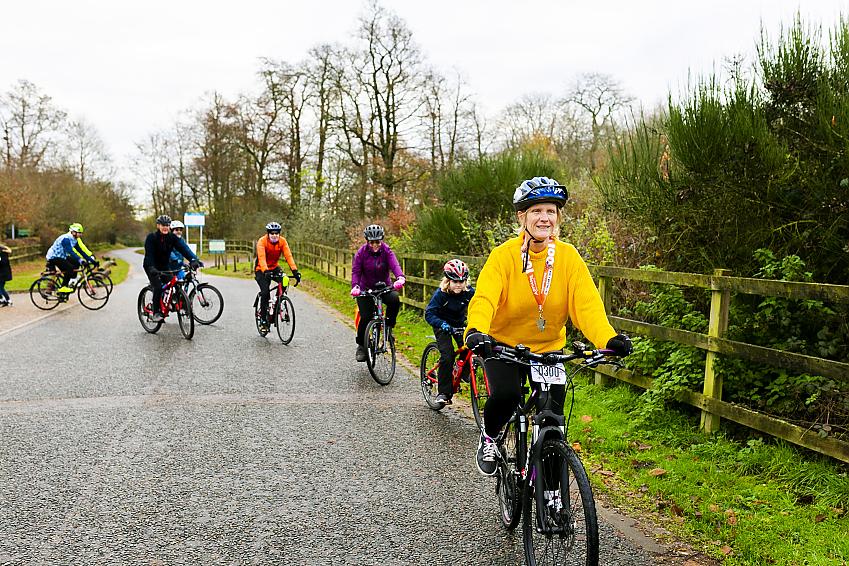 Linda Rackham leading from the front in her Real Yellow Jersey

50-year-old Linda from Norwich stopped cycling when she learnt to drive at age 19. Thirty years on and diagnosed with type II diabetes she was looking for an exercise that suited her. Remembering the joy of cycling from her younger years she went along to a Big Bike Revival event to regain her lost confidence. She’s now cycling over 100 miles a month and has encouraged her partner and friends to join her. 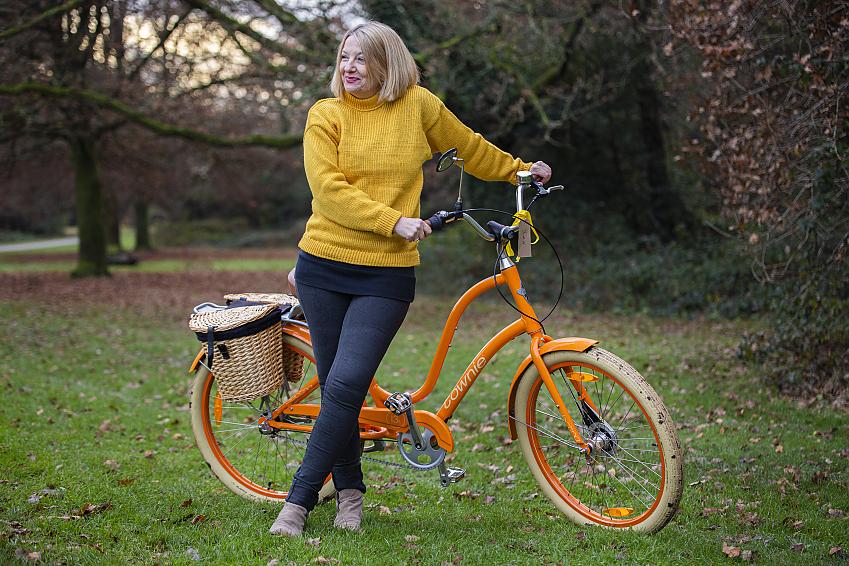 Judith, from Southampton, was looking for new experiences to cope with the grief of losing her mother. She joined a Big Bike Revival group which helped her to explore the local parks at a comfortable pace and she was able to find joy and happiness again with the support and friendship of the group. 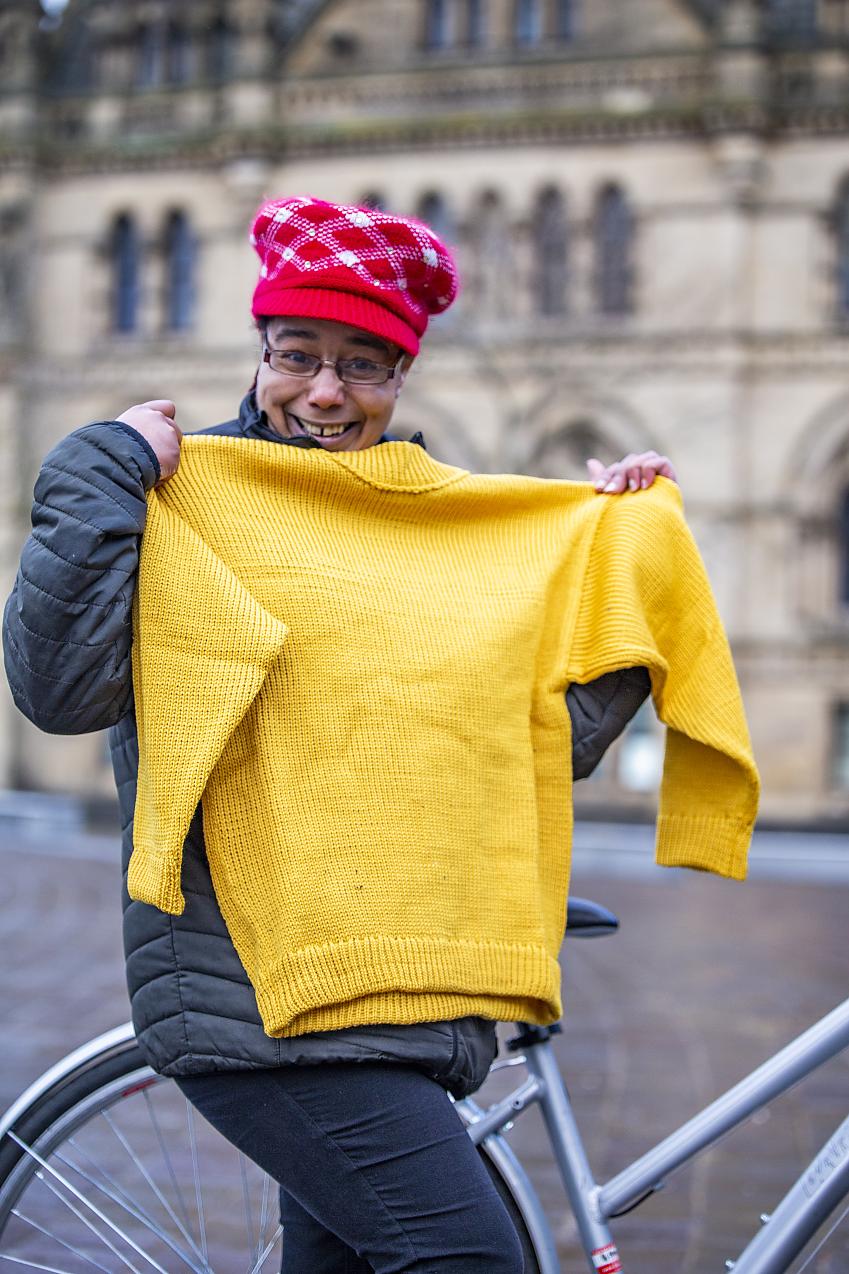 Diagnosed with multiple sclerosis (MS) in her mid-30s Rebecca, from Bradford Yorkshire,  worried her cycling days were numbered. Cycling from a young age Rebecca is determined not to let her illness stop her from riding and thanks to a new bicycle and renewed confidence she hopes to continue riding for years to come .

Farzana Khan, from Bradford, Yorkshire, was not able to ride a bike but was determined that she and her children should learn so they could enjoy going out cycling together as a family. With the help and support of a Big Bike Revival group Farzana and her children have learnt how to ride.

Ray is a shining example of dedication to cycling View

Janet Baird View
Cycling UK continues to support the UK to cycle
This remains true during this difficult period with the ongoing threat of coronavirus Covid-19
Read our latest advice on cycling
Join Cycling UK to help us change lives and communities through cycling
Membership gives you peace of mind insurance, discounts in cycle shops, rides & routes
Join now