The Scottish government has spent £39m on temporary infrastructure to enable people to walk and cycle while maintaining social distancing. Where has the money gone, and what should come next?

This week the Scottish government announced that it has spent £39m on Spaces for People in Scotland. The initiative was designed to enable local authorities across Scotland to put in place temporary infrastructure which helps people to walk and cycle safely while socially distancing.

The closure of the fund comes following the allocation of money to 35 councils and public bodies, although measures such as pop-up cycle lanes are still being installed in some areas.

The coronavirus lockdown saw a boost in cycling, which has continued through the summer with figures for August showing a 30% increase in cycling journeys in Scotland compared to the same time last year. Lockdown restrictions also showed the urgent need for safe spaces for people to walk and cycle.

Cycling UK set up an online tool to help supporters ask their council for temporary infrastructure measures where they live. More than 1,000 supporters sent letters to their councillors and council leaders in Scotland. 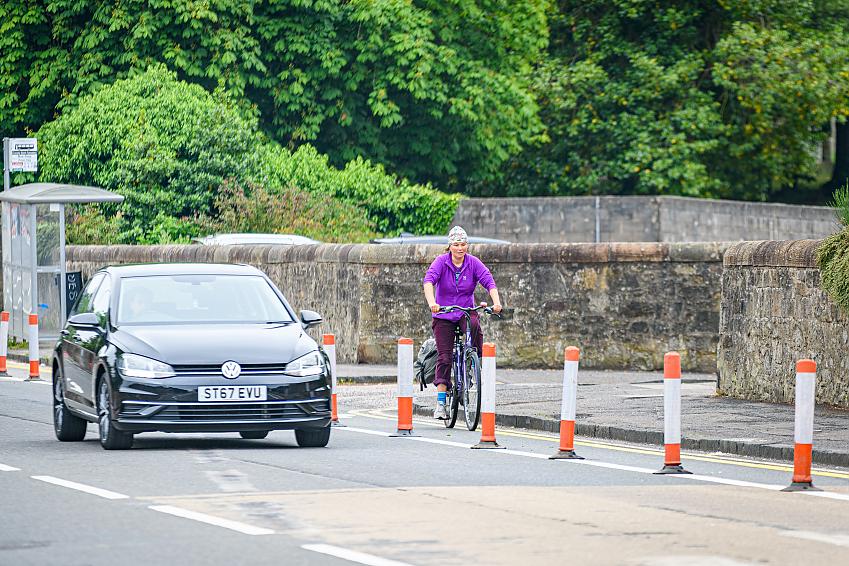 A temporary cycle lane in Edinburgh

You can still visit the campaign page and use the Widen My path Tool to ask your council for measures to be introduced near you.

Back in April the government announced it would spend £10m on Spaces for People, but demand from councils led to it dipping deeper into its pockets to bring the total to £30m. The final spend for temporary infrastructure has now been calculated at £38.97m.

Pop-up cycle lanes have been appearing right across Scotland and continue to do so – see the map on the Sustrans website for schemes in place near to you.

The Scottish government website shows which councils have been given money for these and other measures such as closed roads and widened pavements. Glasgow, Edinburgh, Dundee and Fife councils received the largest awards while only two councils, East Dunbartonshire and Orkney, failed to bid or secure money.

For people to keep up the cycling habitat as lockdown eases, it's imperative that councils urgently complete their Spaces for People schemes.

In addition to announcing the closure of the fund, the Scottish government stated that its focus now moves to permanent infrastructure and making the temporary measures permanent in future.

This may be helped with the announcement that government will now pay 70% of the cost of new cycle lanes and active travel infrastructure, rather than the current 50:50 split with councils. It means councils don’t have to rely on as much their own limited funds to pay for new measures.

"It’s great that the vast majority of councils in Scotland have a share of the £39m and that pop-up cycle lanes and other safe spaces are now being installed all over the country.

"For people to keep up the cycling habitat as lockdown eases, it's imperative that councils urgently complete their Spaces for People schemes. They must also be monitored so that effective temporary measures can be turned into permanent infrastructure at the earliest opportunity."

Key worker's life transformed by Peggy the e-bike during lockdown View
Cycling UK continues to support the UK to cycle
This remains true during this difficult period with the ongoing threat of coronavirus Covid-19
Read our latest advice on cycling
Join Cycling UK to help us change lives and communities through cycling
Membership gives you peace of mind insurance, discounts in cycle shops, rides & routes
Join now