Transport Minister Robert Goodwill has only been in post for a couple of months, but after the terrible string of deaths in London, cycling has come to dominate his portfolio. The Transport Select Committee took evidence from him this week, many of his responses were encouraging.

In his evidence to the Transport Select Committee, he was well-briefed and offered some refreshing opinions on cycle safety and increasing cycling.

He's an experienced cyclist and has also driven lorries, putting him in a unique position to comment on the needs of both.

A cyclist - and a lorry driver

From that perspective, he acknowledged that it would be "no bad idea to get truck drivers on cycles." CTC has consistently argued that lorry drivers should experience what it is like to be on a bike, just as many cyclists benefit from the 'Exchanging Places' events which show how limited the view is out of the inappropriate cab heights used in most current lorries.

Whereas he applauded large freight companies for taking cycle safety seriously, he pointed out that there were some "cowboy operators" who presented a much greater risk. Although specialist training for lorry drivers exists, he didn't agree with the idea that cycle safety should be a mandatory part of every training programme.

He was also dismissive of the idea of banning lorries from London's busiest streets, even though that has proved successful in reducing cycle fatalities in Dublin and Paris.

On issues of road design, however, he was much more enthusiastic. Over the week leading up to the evidence session, he toured London and Leeds by bike, seeing the good, bad and outright dangerous of the cycling facilities and road conditions in both cities.

Cycle superhighways work until you reach a junction, or a zebra crossing, or there is a vehicle parked which is blocking the superhighway, in which case you've got to go around.

His experience with officials and campaigners on those trips meant he could relate to the committee some of the bureaucratic regulations which stand in the way of good design.

In particular, he pointed out some of the deficiencies of traffic signalling, which allow for a green lamp signal for cycles, but not a red one - which makes a fully separate traffic signal system for cyclists harder.

He even acknowledged the "need to understand why some cyclists feel the need to get away from the junction before the light turns green. We can't condone that, but maybe we should look at having an early start green bicycle signal to let the cyclist get away legally."

The Department for Transport have made significant strides in recent months in allowing new designs, with permission given for early start cycle signals - giving cyclists a few seconds before other vehicles start - in recent schemes in Cambridge and Manchester. 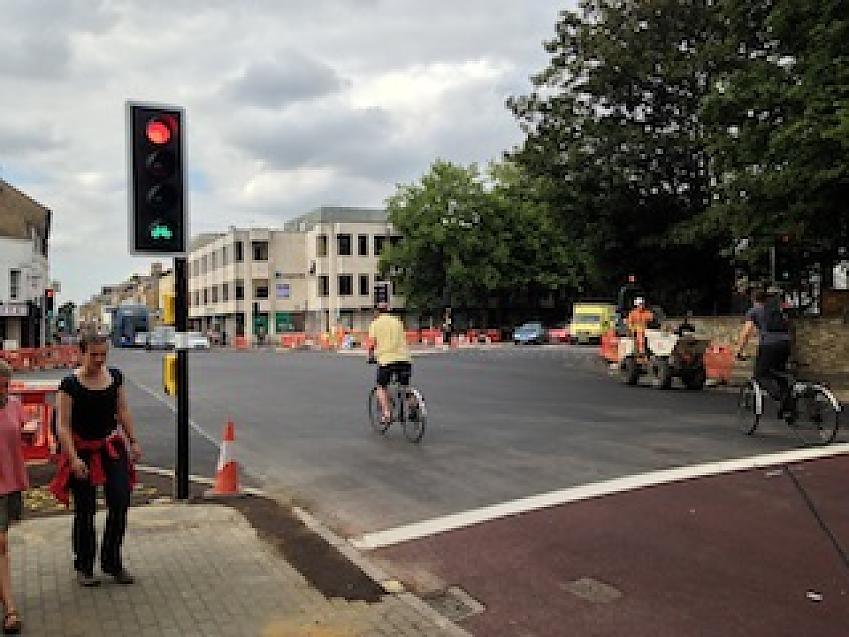 On the northbound arm of Hills Road cyclists are generally travelling north through the junction, but other traffic is only turning east or west onto the ring road.

By separating cyclists in time, if not in space, the risk to cyclists from traffic turning across their path is reduced. As a video from the campaign shows, however, this doesn't stop conflict from occurring if cyclists arrive at the junction while the light is green.

Goodwill clearly understands the needs of cyclists, and is keen to maintain pressure on civil servants to increase flexibility for local authorities to pursue innovative approaches to designing for cycling.

He spoke at length about the need to make signs and markings simpler and more consistent, thereby making things like contra-flow cycling much easier to implement.

One of the themes emerging from the discussion was the acknowledgment that cities were building facilities for cyclists because they had realised that young, intelligent and dynamic employees want to live in cities which are cycle-friendly, and information-based industries are attracted to cities that provide for cycling. In other words, cycling infrastructure is key if you want to be globally competitive from the perspective of quality of life.

International expertise presented at the conference supported the conclusion already reached by many local authorities that total flexibility was required from government to allow innovative designs and road markings to be implemented if we are to make road conditions suitable for cyclists who are "more wicker than Lycra."