London's Cycle Hire least used and most expensive in Europe

London's scheme is used half as much as Paris's
By Chris Peck
Tuesday, 10 December 2013

London's Cycle Hire least used and most expensive in Europe

Comparative data from various international bike share schemes show that London's cycle hire scheme is one of the least used and is the most expensive public scheme to operate. The lack of a cycle network in central London is likely to be the main reason why usage is so much lower.

Whereas each bike in Barcelona's scheme is used over 10 times per day, London's are used just 3 times.

'Boris Bikes' are used less than half as often as the Parisian Velib' scheme.

The study, undertaken by US-based sustainable transport think tank ITDP, explored data from four of the biggest schemes in Europe and a range of north and south American schemes, and made recommendations for how to run an effective bike share scheme.

Excluding smaller schemes (below 500 bikes) from ITDP's study, only two of the 12 major schemes analysed have fewer uses per day than London, both of them in North America. 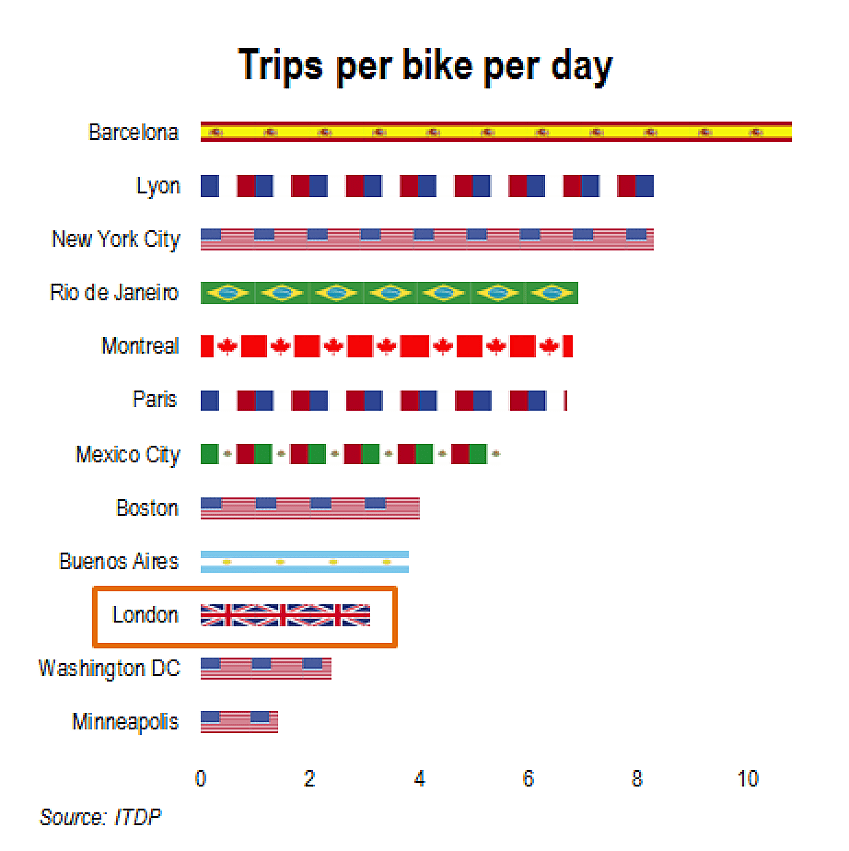 Furthermore, the operating cost of London's scheme exceeds those of all other public schemes, with each trip costing $4.80, compared to just $0.86 per trip for the public schemes in Barcelona or Lyon.

Why is use so low in London?

CTC suspects that the lower than average use of London's scheme is a consequence of the poor conditions for cycling in central London, with little dedicated space for cycling, and far too many one-way streets and pedestrianised routes from which cyclists are banned.

The Mayor's Cycling Vision has promised a central London 'Bike Grid' of segregated infrastructure and quiet streets. However, the initial proposals for routes in a key area - the City of Westminster - are extremely weak, with problem junctions ignored and cyclists expected to follow meandering gyratory routes through the one-way maze of Mayfair and the West End.

With thousands of more docking stations for London's scheme currently being installed to the south and west of the current bike hire zone, Transport for London will be hoping is that the system will begin to be used more for local journeys within these neighbourhoods, rather than the daily commuting to and from central London rail termini, as characterises current trips.

London's scheme should still be deemed a success: users are very satisfied and it helps alleviate congestion on the city's public transport network. However, if use reached the level of peer group cities, the scheme would be much closer to supporting itself financially, which could mean additional investment in extending the scheme to encompass a wider cross-section of London's resident population.

The most popular scheme

Barcelona's Bicing system has been running for over seven years and has proved wildly popular. Its success is all the more remarkable because tourists are not allowed to use it: in London, a considerable proportion of use is made by tourists or day trippers from outside the capital.

ITDP's Bike Share Planning Guide demonstrates the steps needed to make a bikeshare scheme work, with metrics for the optimal density of stations, number of bikes per station and prices to ensure high usage.

In the past CTC contributed to the Optimising Bike Sharing in European Cities research project, the findings of which were used by ITDP.