Cycling in Scotland has more than doubled

Cycling in Scotland has more than doubled

Cycle counters show a sharp rise in the number of people making journeys by bike in Scotland since COVID-19 outbreak. Cycling UK's Claire Hutchison looks at the data.

Latest data released by Transport Scotland reveals that in the week 20 - 26 April, cycle journeys across Scotland were up by 120%.

The Scottish Government says the increased figures are partly explained by an increase in the number of active travel sites it has been monitoring, up from 39 to 88.

In a tweet, Transport Scotland said: "These have much higher levels of walking and cycling, pulling the Scottish average up."

Areas of Scotland have seen a huge increase in the number of people cycling on roads since social distancing measures were introduced amid the coronavirus outbreak.

A counter in Dunfermline showed the highest increase at 215%, according to statistics released in a Cycling Scotland report.

As the roads are quieter in some areas at the moment, now is a great time to try cycling again, for those who haven’t cycled in a while.

Suzanne Forup, Head of Development Scotland for Cycling UK, said: “It is great to see that so many people across the country are cycling for exercise or essential journeys.

“Cycling has huge mental and physical health benefits, and it eases the strain on public transport, making journeys safer for essential workers during lockdown.

“As the roads are quieter in some areas at the moment, now is a great time to try cycling again, for those who haven’t cycled in a while.

“We continue to encourage cyclists to follow the advice of the Scottish Government and NHS Scotland.”

The data was collected from 60 automatic cycle counters across the country as part of the National Monitoring Framework, managed by Cycling Scotland and funded by Transport Scotland.

The areas where counters showed the biggest increase in people riding bikes, according to Cycling Scotland, were:

Travel has fallen from an average of 2.7 to 0.9 trips per person per day since the start of March 2020, according to Transport Scotland. 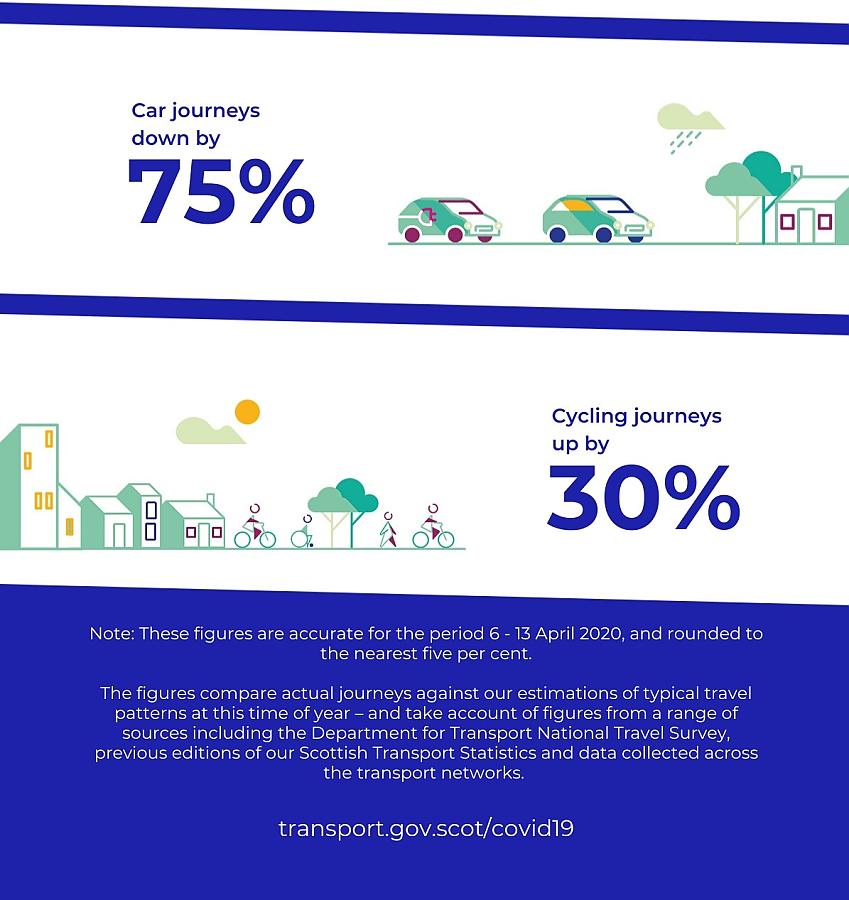