The publication of the Asphalt Industry Alliance’s annual ALARM survey published today shows our roads are worse than ever, and without a change in Government strategy and funding are only set to grow worse.

The ALARM survey over the past years has consistently shown that the UK’s roads are worsening. The latest estimates suggest that 12 per cent (24,500 miles) of local roads will need repairing in the next 12 months, while 20 percent will need fixing within the next five years.

To carry on as the UK has been for the past decade is not an option. The UK’s roads are only deteriorating with the AIA saying it will take at least 14 years to clear the backlog and the considerable sum of £9.3bn to do so.

Rick Green, chairman of the AIA, said: “Local roads are a vital asset, worth in the region of £400 billion, and they support all aspects of our daily work and home lives. But funding for their adequate maintenance has fallen short for so many years that further deterioration is inevitable.”

Recent figures published by the Department for Transport shows the neglect of the UK’s roads is having a clear cost, not just in financial terms of road maintenance, but more worryingly on the safety of the nation’s cyclists. 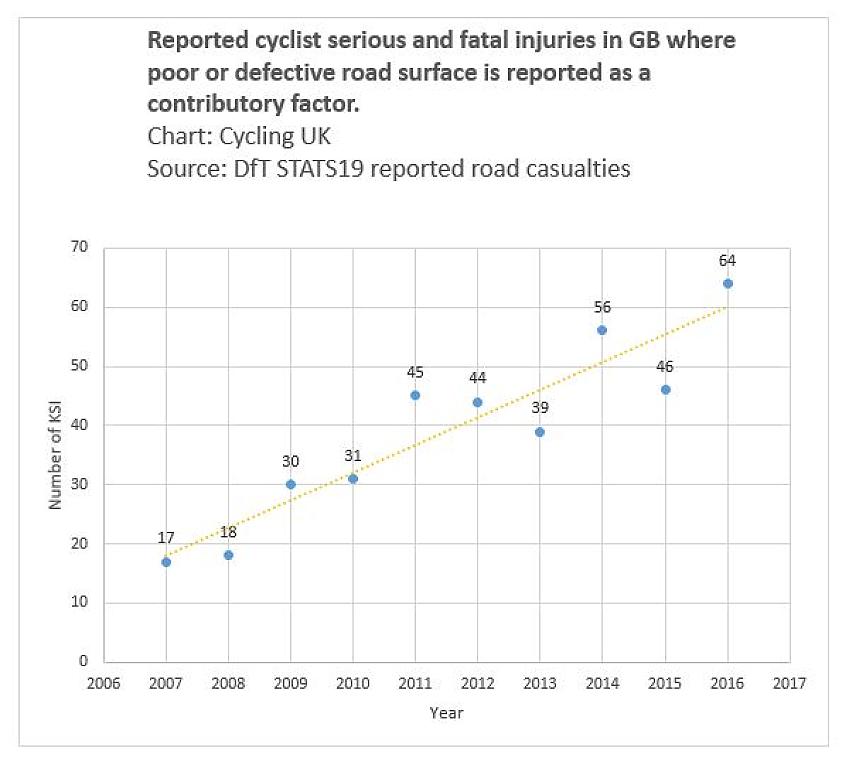 Between 2007 and 2016, at least 390 people have been killed or seriously injured (KSI) while cycling due to defective road surfacing. It’s a shocking figure, but of greatest concern is that the trend for cycling KSIs is only going up over time, which correlates with the findings of the AIA that our roads are only growing worse.

The Government is spending vast sums on new motorway and trunk road capacity, while leaving local streets to rot.

“As well as being hugely aggravating for drivers, potholes can seriously endanger cyclists and even prove fatal,” says Cycling UK’s Policy Director, Roger Geffen. “The Government is spending vast sums on new motorway and trunk road capacity, while leaving local streets to rot.”

Currently the Government is spending £15 billion on its road investment strategy, which goes towards motorways and A-roads maintained by the Government company, Highways England.

In recognition of the pothole problem, the Government announced its “Pothole Action Fund” in 2016. However as campaigners were swift to point out and the ALARM survey proves £250 million to repair potholes over the next 5 years is not enough.

“Given the Government’s ambitions to improve the nation’s health, tackle congestion and pollution, and improve the safety of our streets, it needs to fundamentally rethink the balance of transport funding,” continued Mr Geffen, “The Government must devote far more to maintaining and improving our local streets so that people can walk and cycle in safety.”

Cycling UK has created a pothole reporting tool which alerts the relevant authorities to road defects in their area. For more information head to: www.fillthathole.org.uk

The One Show pothole wars: Why cyclists need potholes to be fixed View

What to do about potholes View
Sick of being close passed by drivers?
Please donate to help us drive down dangerous driving by equipping police forces to run driver education programmes
Donate