A blind bike mechanic is teaching the skills of his trade to members of Cycling UK’s Community Cycle Clubs in Birmingham.

Mike Willis lost his sight completely at the age of 19, having severely damaged his eyes in an accidental clash of heads when he was just seven.

Now 50, Mike is a lead mechanic at iCycle, a Birmingham bike shop and charity which is running free maintenance sessions every Saturday afternoon for the dozens of local cyclists who now ride regularly thanks to the support of Cycling UK.

There are 11 thriving Community Cycle Clubs in and around Birmingham. Working in partnership with Big Birmingham Bikes (all part of the larger Birmingham Cycle Revolution), Vanessa Morris, Cycling UK’s Development Officer for the city, has helped these clubs to either form or grow. The clubs, some of which are only just starting out, have a total membership of over 200 – a figure that is increasing every week.

Every one of those members has a chance to learn bike maintenance skills at iCycle from 2.30pm each Saturday from now until the end of April, thanks to an offer made to Vanessa by store manager Sat Sandhu.

Sat said: “What often holds up novice cyclists is not being able to repair their bikes if anything goes wrong with them, so we are a support station and show them basic bike maintenance skills.

“It’s primarily about helping people and we’ve held five sessions so far for members of Vanessa’s Community Cycle Clubs, catering for about four individuals at a time. It’s open to every member of every community club Vanessa has helped set up, so hopefully as many people as possible will have a go.”

I love working on bikes. There are lots of things I can do, and very few I can’t tackle. It’s all done by touch – and I’ve been doing it for 34 years now. I also enjoy helping other people to learn how to repair and maintain a bike.

Mike Willis, bike mechanic who lost his sight completely at the age of 19

The sessions are free but if people want to make a donation they can, as iCycle is owned by Queen Alexandra College (QAC), a registered charity and a specialist further education college for students over 16 with visual impairment, autism and other disabilities. All the store’s profits are gift-aided back to the college, which is based in Harborne, Birmingham.

Queen Alexandra College (QAC) was where mechanic Mike learned his trade on an NVQ course at the age of 17. Mike will celebrate 25 years working for QAC at the store in March.

In relation to his sight loss, Mike explained: “It stemmed from when I was running around a bonfire with some other kids at the age of seven and clashed heads with another child. There was a big flash of light. I could still see afterwards, but everything was hazy.

“When I started at Queen Alexandra College as a student, they taught me to do cycle maintenance the blind way in case I lost my sight completely. At the age of 19 I had yet another operation but afterwards I couldn’t see anything. I was completely blind.

“I love working on bikes. There are lots of things I can do, and very few I can’t tackle. It’s all done by touch – and I’ve been doing it for 34 years now. I also enjoy helping other people to learn how to repair and maintain a bike.”

Sat (pictured below) said: “Mike is one of our main mechanics. I have worked with a lot of mechanics over the years and he is up there with the very best of them.

“Mechanics are usually hidden out of view, but ours are out front, proud to show off their skills. People like the fact our workshop is in full view as you come through the front door. You can bring your bike in and work with the guys to resolve your problem.”

Sat took over at iCycle, in Three Shires Oak Road, Bearwood, in January last year. A road bike rider for 16 years, he added: “We are an independent bike dealer retailing Giant, Raleigh, Dawes and Diamondback bikes, as well as having the workshop, but there is obviously a big social element to our work as well.

“As well as the maintenance sessions for Vanessa’s Community Cycle Club members, we offer various other initiatives to help the community, such free as bike servicing to the local triathlon club’s under-16s. And of course there’s our link with Queen Alexandra College, which plays such a vital role giving students the life skills to help them realise their potential to work and to live independently.

“Our ultimate aim is to try and assist people develop an interest in cycling. Birmingham is in its infancy when it comes to cycling for commuting and everyday journeys, but we are getting there. We are helping that process and it is great to work with Cycling UK and other organisations to make it happen.”

Cycling UK is certainly playing a key role helping to achieve that goal alongside other organisations such as Big Birmingham Bikes, which is part of Birmingham Cycle Revolution – an exciting 20-year, local authority initiative encouraging more people to cycle and make the city healthier, greener, safer and less congested.

The 11 Cycling UK-affiliated Community Cycle Clubs in Birmingham, and their membership numbers, are: 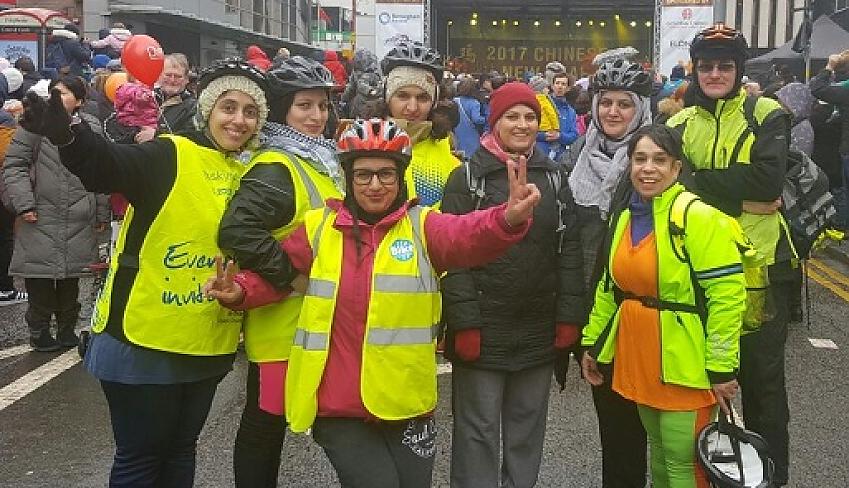 Bryce, who's blind in one eye, gets back on a bike after 20 years View
Cycling UK continues to support the UK to cycle
This remains true during this difficult period with the ongoing threat of coronavirus Covid-19
Read our latest advice on cycling
Join Cycling UK to help us change lives and communities through cycling
Membership gives you peace of mind insurance, discounts in cycle shops, rides & routes
Join now