Worst of the worst … your shocking cycle lane stories

Worst of the worst … your shocking cycle lane stories

A big thank you to all those who sent in contributions following our appeal for examples of shocking cycle lanes – the standard of entries really was appalling!

In our CycleClips e-newsletter a couple of weeks ago, we ran a short piece about a new book by David Whelan with the none-too-subtle title: ‘Crapper Cycle Lanes – misguided, misplaced and moronic marvels’.

We then asked if our CycleClips readers knew of any so-called infrastructure which was meant to help we cyclists but was nothing more than a waste of time, money, tarmac, paint and signage (to name but five).

Cycling UK’s national Space for Cycling campaign aims to create the conditions where anyone can cycle anywhere. We are calling on councils to create a network of cycle-friendly routes and have devised a three-point plan for them to sign up to with the headlines Plan, Invest, Build.

Unfortunately, not every local authority gets it right. Some of the cycle lanes you highlighted were so inept, we didn’t know whether to laugh or cry. Here are six of the best (or worst):

The main picture at the top of this article was sent in by Dave Chapman. This particular cycle lane has been at the end of Priory Avenue in Dave’s home town of High Wycombe for a number of years. Little more than five metres long, it’s perfect. Oh, apart from the two metal barriers that straddle it (one of which looks as though it’s suffered an impact or two over the years).

That's a tough ask, but the following are up there when it comes to incompetence… 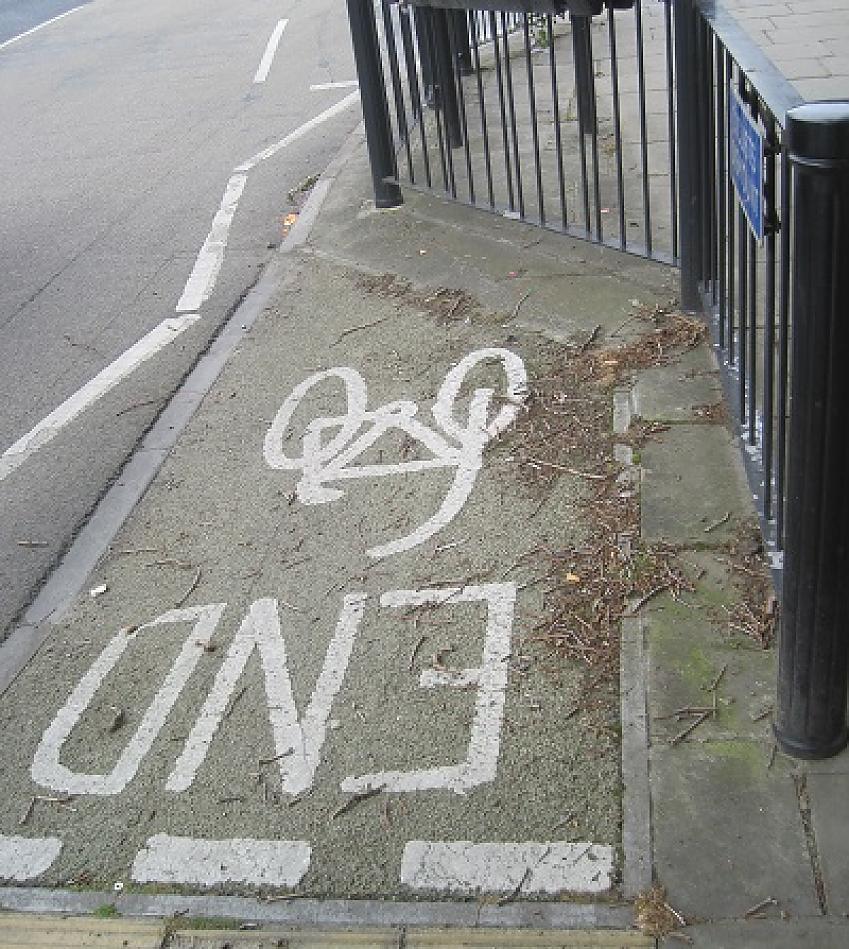 It’s anyone’s guess how much it cost to build this tiny section of cycle lane in York. Little more than the length of a bike, it can be found opposite the entrance facade of the city’s main railway station. Thanks to David Miller for sending in the photograph.

The cycle lane on the A226 between Strood and Gravesend in Kent gets Kevin Elliott’s vote. Kevin, who supplied a video of a recent journey along the traffic-clogged road, said: “The cycle lane is potholed, obstructed, degraded and, in places, overgrown. 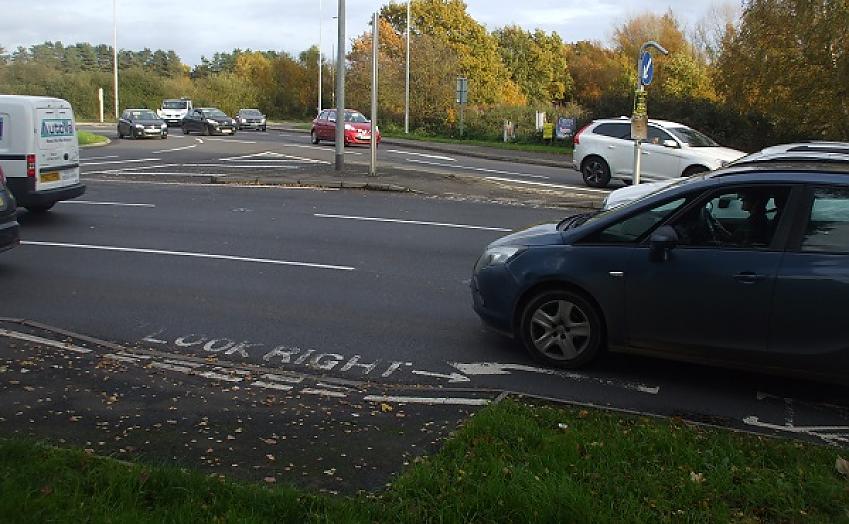 David Greening, Runs Secretary for West Norfolk CTC, emailed us to say the worst cycle lane in King’s Lynn is that fairly recently constructed across the Eastern Bypass (A149) at its junction with Gayton Road (A1076/B1145).

David explained: “It is built on the south side of the roundabout and the cyclist travelling east ends up on the wrong side of the B1145 and, as this is where the cycle track ends, he/she has then to cross the busy B1145 with no carriageway definition to help.

“Travelling west, the cyclist finds he/she is on the blind side of a roundabout with traffic approaching in two merging lanes. If he/she gets to the island safely, he/she then has to cross three further lanes of traffic before arriving at the westbound cycle track on Gayton Road.

“Needless to say it sees very little use, it is much safer and easier to remain on the carriageway in both directions. Our local cycling rep protested at this design when it was first proposed but no changes were made. It’s not even a token gesture to the cyclist.” 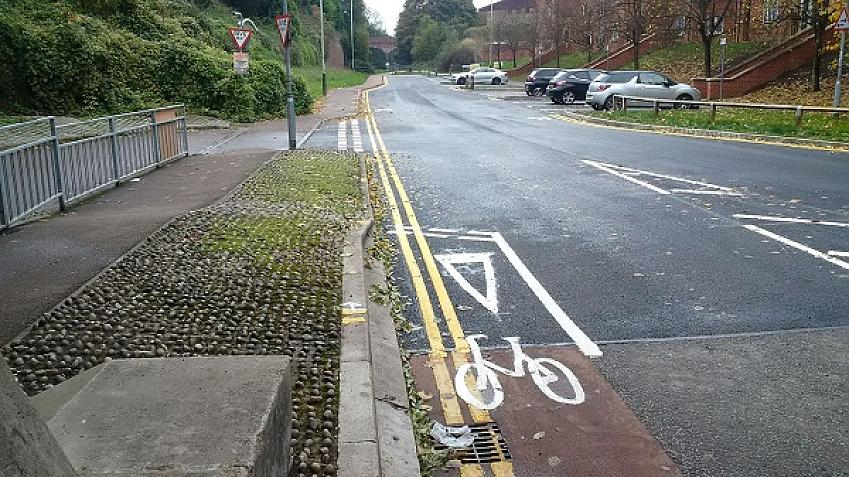 Mixed messages are the order of the day when it comes to a new cycle lane on Brazen Gate in Norwich. Those give way lines are designed to bamboozle both cyclists and drivers.

Thanks to Neil Freeman for sending in this photo. As he said: “We can only assume that cyclists ‘in the lane’ would need to give way to traffic entering the road from the supermarket car park on the left, or if they moved six inches outside the painted line they would have right of way...who knows?! Waste of paint :-)” 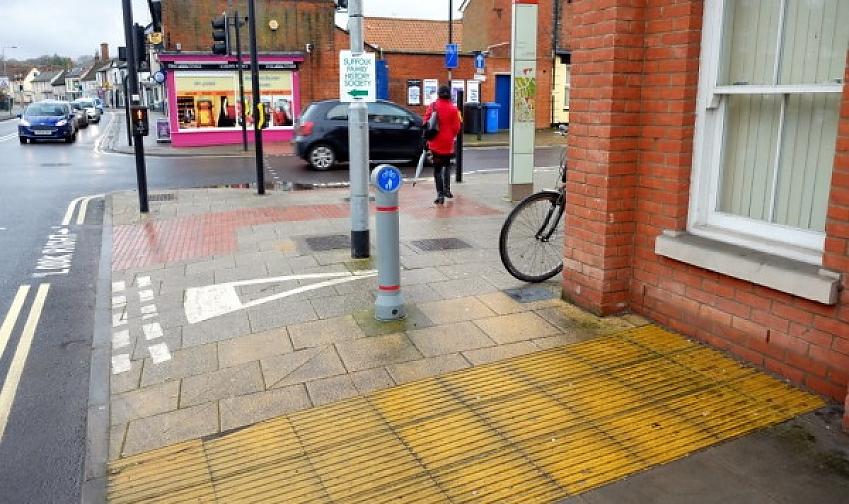 This piece of mind-boggling infrastructure comes from Ipswich and appears to be a perfect recipe for potential conflict between cyclist and pedestrian. It was sent to us by Ben Millard and comes from the Warrington Cycle Campaign website under the heading: Cycle Facility of the Month, November 2016.

The photo was taken by Tony Green and the description below it reads: “In order to promote good inter-community relations, Suffolk County Council strongly believes that cyclists and pedestrians should be brought together wherever possible. To this end they’ve made sure that the cycle path on the pavement in Grimwade Street is as close as possible to the buildings, so that when a pedestrian on St Helen’s Street crosses it at the junction, both cyclist and pedestrian have as little time as possible to see each other and take avoiding action.”

The Cycle Facility of the Month feature on the Warrington Cycle Campaign website, compiled by Pete Owens, formed the basis for the original 'Crap Cycle Lanes' book nearly 10 years ago, and now its sequel – which neatly brings us full circle.

While much of this article might seem light-hearted on the surface, there is a serious underlying message: let’s see an end to the type of money-wasting, potentially dangerous token gestures to cyclists which we’ve highlighted here, and create sensible, well-planned Space for Cycling as advocated and promoted by Cycling UK.

Planning for cycle-friendly roads and communities can result in less traffic, safe streets and neighbourhoods, clean air, and will give young and old alike the chance to get out and about easily.

That will bring huge benefits for everyone in terms of health, quality of life, the environment and the economy – whether or not they choose to cycle themselves.