A cycling journey from homelessness to happiness

A cycling journey from homelessness to happiness

Tom Hibbs was homeless and feeling at rock-bottom little more than a year ago. Now he has a roof over his head, a job he loves and is the proud owner of the Arthur Moss Medallion as Cycling UK’s Volunteer of the Year.

Tom was presented with the award – which he shared with two teenaged endurance cyclists – at the Cycling UK Annual Members’ Get Together in Manchester on Saturday (8 October).

The 21-year-old has turned his life around since being introduced to Ceracycloan, a bike restoration and education centre in Stockport, which is affiliated to Cycling UK and plays a key part in our Big Bike Revival.

He said: “It feels amazing to win this award – like crossing the finishing line after a massive bike ride. A year ago I wouldn’t have attended an event like this, I was so lacking in confidence.

“I went to Ceracycloan a year ago last month when I was 20. I had been kicked out of my mum and dad’s house, was homeless and out of work, and was suffering a bit of depression.

“My sister Nikki was worried about me sleeping at friends’ houses and got me in touch with Depaul, a charity which helps young people who are homeless, vulnerable and disadvantaged. I got talking to them about my passion for bikes and they pointed me in the direction of Ceracycloan.”

Brian Pendlebury, the Ceracycloan Centre Director, offered Tom a voluntary position and he spent nine months learning bike maintenance and helping his peers by doing youth work. He now works full-time at the centre and is doing a Level 2 Youth Work Apprenticeship.

Tom, who now lodges at his sister Nikki’s house in Dukinfield, added: “Working at Ceracycloan has made me a lot happier and given me so much more self-confidence. Brian and Depaul have shaped me into the person I am now and I thank them for that.”

Thanks to his sister’s introduction, Tom initially spoke to Depaul support worker Dave Smith when he was at his lowest last year. Dave helped him move into a hostel, where they started working together to rebuild his life.

There’s a world of difference comparing my life a year ago to how it is now. I’m hoping my apprenticeship will lead to a future career as a bike mechanic as I am really passionate about it.”

Tom Hibbs, joint winner of the Cycling UK Volunteer of the Year award

Tom said: “When I met with Dave, he made me feel so much better about myself. He helped me realise I could achieve the things I wanted as my confidence grew.”

Through Depaul, Tom was referred to Greater Manchester Talent Match, a programme supporting young people into employment through a 1:1 support worker called a Talent Coach. Tom’s Talent Coach, Katie Watson, is based at Back on Track – a local charity that provides training and work experience for disadvantaged people.

Tom explained: “Working with Katie gave me the chance to start to put my life back together. I took part in things like cooking courses, which have given me more confidence and helped me learn new skills.”

But bikes are Tom’s first love – which is why he’s so happy working at Ceracycloan. It is a Cycling UK-affiliated Community Cycling Club and was the venue used for the national launch of our 2016 Big Bike Revival in April.

As well as mentoring other young people, Tom is gaining a reputation as a top bike mechanic. He proved his prowess by building and customising his own road bike to take part in a 54-mile charity bike ride to raise funds for Greater Manchester’s St Ann’s Hospice on 2 October.

Ceracycloan Centre Director Brian said: “Tom is simply exceptional. Everything you throw at him he excels at. He is a delight not only to work with but also as an individual. He has an open, inquisitive mind that thrives on learning new things and he is proud to introduce innovative ideas to our team.

“He is mentoring young people now as well as improving himself. I just hope he keeps improving, and I’m sure he will.”

Tom added: “There’s a world of difference comparing my life a year ago to how it is now. I’m hoping my apprenticeship will lead to a future career as a bike mechanic as I am really passionate about it.”

Katie, Tom’s Talent Coach, said: “Tom has done amazingly well and should be so proud of himself. His story is testament to what you can achieve if you stay determined, patient and make the most of the opportunities.”

Tom shared the Cycling UK Volunteer of the Year award with teenagers Will Hsu and Charles Stevens, who cycled 10,000km from Beijing to Tehran this summer to raise funds for a children’s charity. They were presented with the Arthur Moss Medallion by Cycling UK Trustee Welna Bowden, Chair of the Awards Committee.

The three young cyclists were also named Cycling UK’s Young Achievers of the Year. Making this award presentation (below) was Isla Rowntree, British Veteran Cyclo-Cross champion and Cross Country MTB champion in 2010 and 2011, and British National Cyclo-Cross champ in 1999, 2002 and 2003. Isla is founder of the renowned children’s bike design specialists, Islabikes. 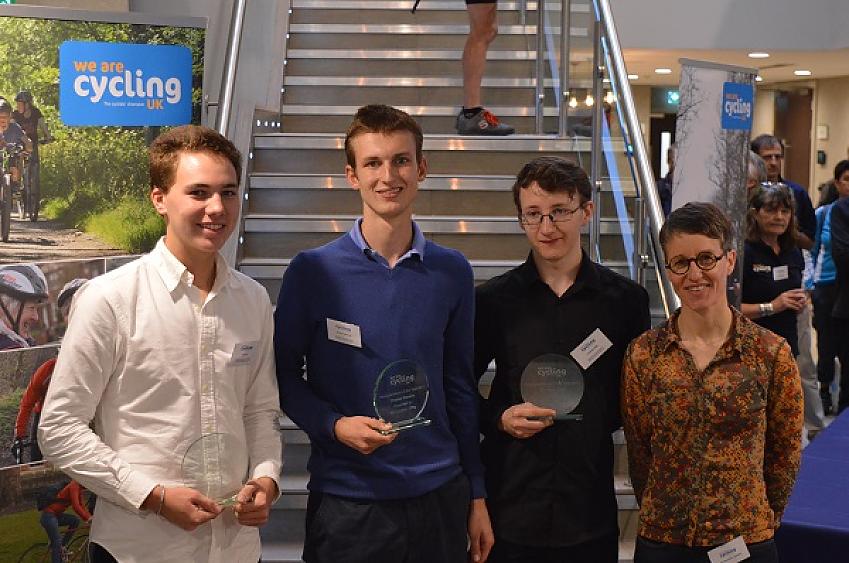 Sleeping rough and a cycle challenge that's tough View
Cycling UK continues to support the UK to cycle
This remains true during this difficult period with the ongoing threat of coronavirus Covid-19
Read our latest advice on cycling
Join Cycling UK to help us change lives and communities through cycling
Membership gives you peace of mind insurance, discounts in cycle shops, rides & routes
Join now