Teenagers aim to be youngest to cycle 10,000km Silk Road

Charles Stevens and Will Hsu are setting off on a 10,000km cycling adventure from Beijing to Tehran
By Tony Upfold
Thursday, 5 May 2016

Teenagers aim to be youngest to cycle 10,000km Silk Road

Teenaged Cycling UK members Charles Stevens and Will Hsu fly out to Beijing today – aiming to become the youngest people ever to complete the world’s longest, hardest, hottest and coldest cycling challenge.

Fewer people have pedalled the 10,000km Silk Road route from Beijing to Tehran than have climbed Mount Everest.

But Charles and Will, aged 19 and 18 respectively, will put months of planning and training to the ultimate test when they tackle the cycling adventure of their young lives.

They will set off from Beijing on Sunday week (15 May) and spend the next four months riding through China, Mongolia, Russia, Kazakhstan, Kyrgyzstan, Tajikistan, Turkmenistan and Uzbekistan before a scheduled 5 September finish in Iran’s capital Tehran.

The duo are good friends who went to school at Radley College in Oxfordshire and decided to do something radically different in their gap year before heading off to university.

Charles said: “We will traverse deserts, steppes and mountain ranges over 120 days, experiencing temperatures ranging from 45°C to -10°C and climbing from sea level to 4,600 metres – which is almost the height of Mont Blanc.

“It will be demanding, both physically and psychologically, but the difficulties we are bound to face will be outweighed by the dramatic scenery, the variety of people and cultures we will come into contact with, and the life-changing experience the journey will provide.”

Charles and Will first dreamed up the idea of cycling from Beijing to Tehran 18 months ago, before taking their A-levels, and are funding the trip themselves with help from their parents.

Passing out in the middle of the Gobi desert or suffering bad altitude sickness 4,600 metres up might not be too clever without medical back-up, so we have support as a safety net.”

Charles, who lives in the Battersea-Clapham area of south London, said: “It took about six months of negotiation with our parents before they realised we were really serious about this. They have been fantastic and incredibly supportive – first and foremost they are concerned about keeping us safe.

“Will and I have worked to help pay for the trip, while our parents have also provided money, so all the cash we raise will go to the charity. Among other things, I’ve stacked shelves in Waitrose while Will has worked in a pub.

“Our original intention was to ride unsupported, but the extremes we’ll experience have huge health implications. Passing out in the middle of the Gobi desert or suffering bad altitude sickness 4,600 metres up might not be too clever without medical back-up, so we have support as a safety net.

“Navigating, day-by-day riding and camping at night are down to us, but there will be a support vehicle not too far away with a medic and mechanic on board in case of major problems with our health or the bikes.

“People automatically correlate the unknown with danger, but the journey is safer than many perceive. Even so, it’s a bit pointless taking unnecessary risks bearing in mind some of the regions we will skirt or travel through, so having support is a sensible idea – and certainly keeps our parents happier!”

The pair will not be officially ratified as the youngest ever to complete the Silk Road ride. The ‘youngest’ categories for extreme world records are no longer recognised because of the inherent danger of encouraging ‘pushy parents’ to get their kids attempting hazardous challenges at a ridiculously young age.

Charles said: “It won’t be officially acknowledged but we can say with a pretty high degree of certainty that we will be the youngest ever to complete the route, assuming we do. Hopefully we can inspire others to ride the Silk Road, which is considered the longest, hardest, hottest and coldest cycling challenge in the world, as well as historically highly significant.”

Will, who lives in Leamington Spa, said: “As fun as it sounds, going to ‘find myself’ in Thailand during my gap year wasn’t for me. So rather than attend something like the all-night Full Moon Beach Party in Koh Phangan, I’ll be ridding myself of life’s excesses and cycling through some of the least-travelled areas of the world.

“Some people might think our ride sounds crazy, but I’m looking forward to experiencing new and unfamiliar cultures and countries while achieving something worthwhile.”

Charles will be riding a Condor Heritage Disc bike over the 10,000km route, while a Surly Disc Trucker takes the strain for Will.

As fun as it sounds, going to ‘find myself’ in Thailand during my gap year wasn’t for me. Some people might think our ride sounds crazy, but I’m looking forward to experiencing new and unfamiliar cultures and countries while achieving something worthwhile.”

Charles added: “We both have huge respect for Cycling UK and what it does to promote and campaign for cycling and inspire people to get out on their bikes.

“We’ve always been keen cyclists but there has been no short-cut to getting fit. It’s difficult to train in the UK for obstacles such as vast mountain ranges – the Sussex Downs aren’t quite the same! But we’ve been going to the gym three or four times a week for strength and core training, as well as spinning, and we have been road riding six days a week, building up long hours in the saddle and miles in the legs.”

The duo are aiming to raise £25,000 for A Child Unheard Foundation, a small charity working to improve the lives of youngsters in Africa through education, sports and arts.

Charles declared: “It will be as tough psychologically as physically, but we will think of who we are raising money for to keep us motivated when we have those down moments that are bound to occur.

“We spent last September in Ayenyah, Ghana, doing volunteer work at an orphanage. We got to know the children personally and every penny we raise will go to A Child Unheard Foundation to secure the future of the school there, which is running out of funding, and provide them with such things as teaching, counselling, meals and learning materials.”

There will be no resting on their laurels when Charles and Will return to the UK on 9 September. Will is heading off to Bath University to read Economics and International Relations, while Charles has to make a mad dash for Scotland to begin his History degree course at the University of St Andrews.

Charles explained: “I should be starting at St Andrews on 7 September but I have spoken to the university and they will allow me to be a couple of days late because of the exceptional circumstances of our trip, for which I’m grateful.”

If the university’s School of History want to consult an expert on the illustrious past of the celebrated Silk Road, they will know who to ask… 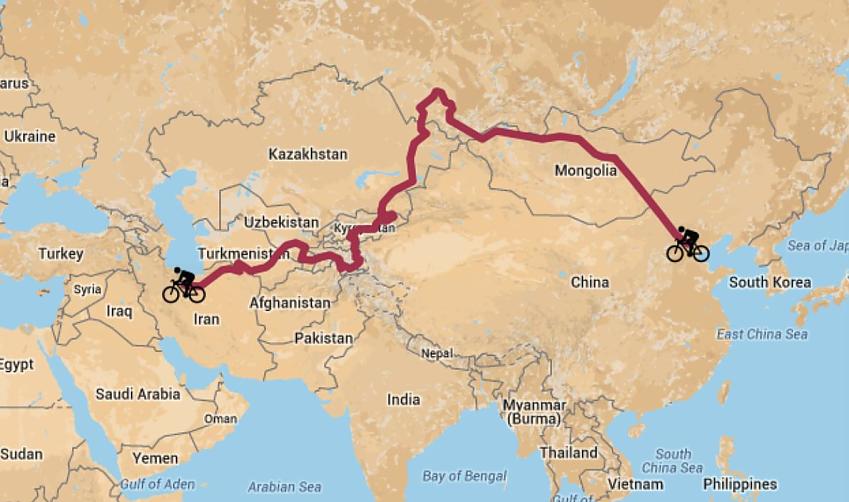 Great Rides: Bikepacking in Tibet View
Cycling UK continues to support the UK to cycle
This remains true during this difficult period with the ongoing threat of coronavirus Covid-19
Read our latest advice on cycling
Join Cycling UK to help us change lives and communities through cycling
Membership gives you peace of mind insurance, discounts in cycle shops, rides & routes
Join now