Members of a First World War cyclist battalion before being sent to the Western Front
By Tony Upfold
Wednesday, 11 November 2015

CTC remembers the thousands of cyclists who went to war – many never to return.

On 11 November every year, wreaths are laid and cyclists stop to pay their respects to those who died in the First World War at the Cyclists’ Memorial, erected in 1921 on the village green in Meriden, West Midlands – the centre of England.

Among those remembered in 2015 by CTC were two 19 year olds – Lieutenant Rowland Prichard, killed in action at Ypres a century ago, and Flight Lieutenant Herbert Wanklyn, whose seaplane came down off the Belgian coast. 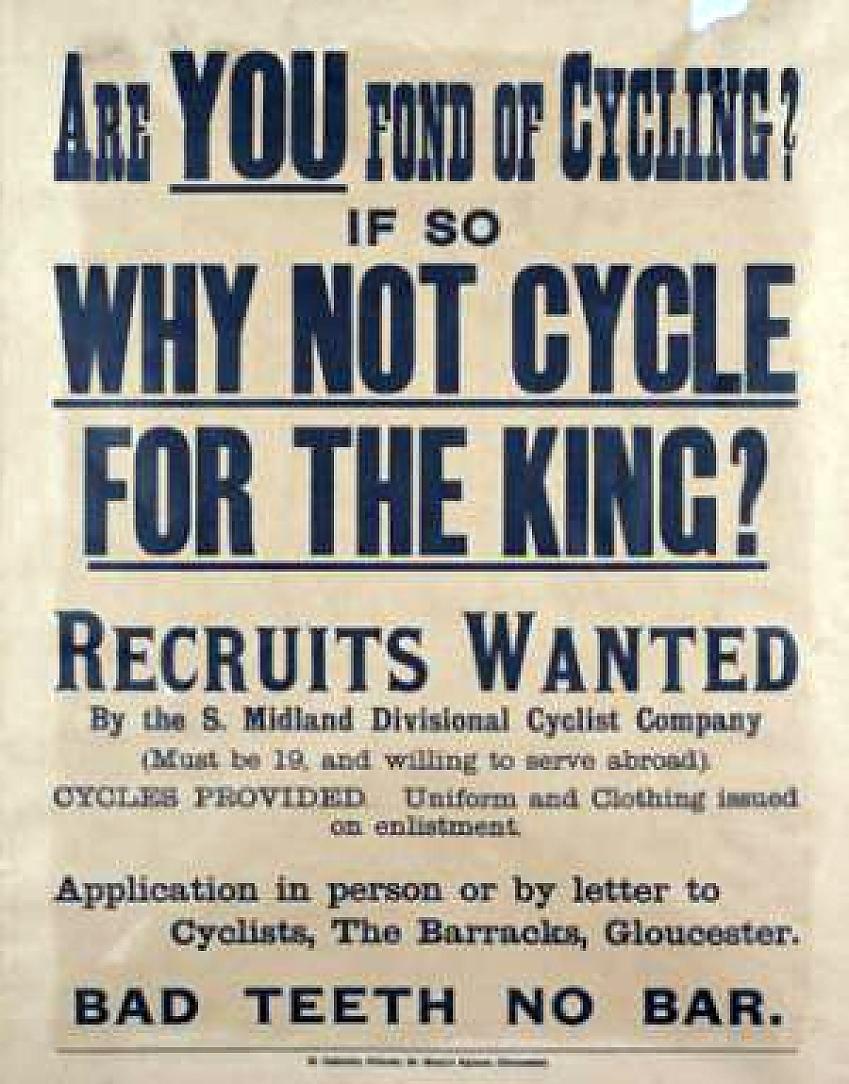 2015 also marked the 70th anniversary of the end of the Second World War, which many CTC members fought in – with the Allies celebrating VE Day on 8 May 1945 and VJ Day following on 15 August.

The CTC Gazette for 1915 provides a fascinating and poignant insight into life in the early part of the Great War and the role CTC played in recruiting its members for active service in special cycling battalions, with two in existence and busily training for life on the Western Front at the start of the year, and a third being planned. As the poster on the left shows, the state of your teeth was no barrier to being called up!

The Gazette noted: “Many CTC-ites are now actually in the fighting line. Some, alas! ... are numbered with the slain. Some are prisoners of war. Others have been wounded. But all who remain on the effective list, we make no doubt, are exhibiting the courage and fortitude which confers distinction on themselves…”

CTC's Kay Lakin and Tony Upfold have compiled a selection of extracts from the Gazette of 100 years ago, together with details of some of those CTC members who lost their lives in battle. Click the link below to read how CTC viewed the Great War in 1915.

Commemorating cyclists in conflicts on VE day View
Cycling UK continues to support the UK to cycle
This remains true during this difficult period with the ongoing threat of coronavirus Covid-19
Read our latest advice on cycling
Join Cycling UK to help us change lives and communities through cycling
Membership gives you peace of mind insurance, discounts in cycle shops, rides & routes
Join now