Why I love...the Tour de France

Does a love of the Tour inspire you to ride more?
By FelixLowe
Tuesday, 28 June 2016

Why I love...the Tour de France

The greatest show on earth starts this weekend in Mont St Michel, as 198 riders compete for the Tour de France's yellow jersey. Cycling UK asks Eurosport journalist Felix Lowe what's the appeal and how come it took a long term fan so long to swap sofa for saddle...

One of my earliest cycling memories is Greg LeMond winning the 1989 Tour de France by just eight seconds after beating his pony-tailed rival Laurent Fignon in a nail-biting time trial on the Champs-Élysées. I was eight at the time. Little did I know that a quarter of a century later I'd be sitting in a French hotel bar interviewing the three-time Tour champion about his illustrious career – a day before we both took to the start of the Time-Mégève cyclosportive.

This was my first attempt at emulating those whippet-thin pros whose pedal strokes I'd watched as a fan and covered as a Eurosport journalist for the best part of a decade. The mass-participation ride took on a slew of climbs in the shadow of Mont Blanc in an area of the Alps that features heavily in stages 19 and 20 of this summer's Tour. It was a rite of passage for an armchair fan who had finally crossed the riding Rubicon, swapping pen for Pinarello at the ripe old age of 31. And as I grappled in the drizzle on the Col de Saisies, I couldn't help but recall that this was where the American Floyd Landis made his infamous testosterone-fuelled attack in 2006 in a last-ditch solo attack that saw him crowned Tour champion – until the results of his drugs test filtered through.

Here lies the appeal of cycling for us fans. I don't mean the doping sideshow. More so, the opportunity to experience vicariously what we have watched on TV and read about in the history books. Cycling's that unique activity whose stadia are public roads open to us all. Fancy a kick-about on Wembley's hallowed turf? Good luck with that. What about a rally on Wimbledon's Centre Court? In your dreams... But any of us can get on a bike and (well, at least try to) ride up the Col du Tourmalet. The familiarity of each hairpin bend and the painted names still adorning the road transports us into a race watched by 3.5 billion TV spectators worldwide.

Cycling's that unique activity whose stadia are public roads open to us all. Fancy a kick-about on Wembley's hallowed turf? Good luck with that. What about a rally on Wimbledon's Centre Court? In your dreams... But any of us can get on a bike and (well, at least try to) ride up the Col du Tourmalet."
Felix Lowe

What was crazy was how long it took me to join the pedalling fraternity. For someone whose bread and butter was writing about cycling, I certainly left it late to enter the bakery. My friends were always bemused by my non-cycling status. But London for a long time was hardly the most conducive city for riding a bike – not that I owned one – and few of my pals were particularly into it either. London 2012 seemed to change that. Soon everyone in the capital – including me – bought a bike and made a beeline for Box Hill to sample the Olympic road race route.

To be fair, my arm was twisted. The editor of a new magazine called Cyclist asked me to write its monthly back-page column. Instead of commenting on the pro races, I was to muse about my own experiences in the saddle. Which meant all manner of things in the name of journalism: lycra, learning to change an inner tube, shaving my legs... 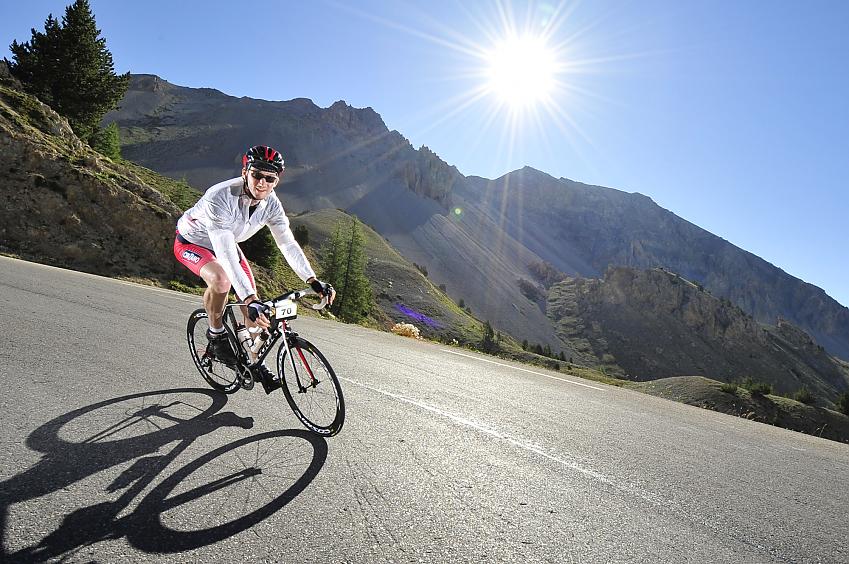 Felix tackling the Haute Route in his signature Cinzano shorts

Fast forward a few months and there I was ahead of my Mégève baptism of fire, chewing the fat with America's only bona fide Tour de France champion. When I told LeMond about my plan later that summer to ride some 1,750 miles from Barcelona to Rome – over three mountain ranges in the footsteps of Hannibal and his army of 37 elephants – he grimaced and told me it would be a "bloody massacre". Save for some hairy moments (involving mountains – not my newly waxed pins) it was anything but. Just a joy from start to finish.

Besides acting as the bulk of research for my book Climbs and Punishment, the 25-day adventure was a chance for me to ride my own Grand Tour less than a year after taking up the sport. Dutifully, I set myself the challenge of tackling as many legendary cols as possible. Hence, I found myself scaling Mont Ventoux in truly apocalyptic conditions on what was meant to be a "rest day". It was also why I embarked on an intrepid double ascent of Alpe d'Huez two months after the 2013 Tour route included exactly the same itinerary (albeit without the foolhardy final descent by moonlight).

Edging past the church on 'Dutch Corner' – as the sun finally broke through the clouds highlighting the orange graffiti still covering the road – spurred me on with a visual madeleine of emotions. Tackling the perilous, twisting descent of the Col de Sarenne made me appreciate the safety concerns many riders raised earlier that summer. Here was the point Christophe Riblon overcooked a bend en route to his final climb to victory – and there, five hairpins from the summit, was where the yellow jersey Chris Froome broke the rules by ordering his team-mate Richie Porte to fetch an energy gel from the Sky team car.

A day later I tackled the Lautaret, Galibier and Izoard passes – a fearsome but achingly beautiful trio of cols imbued in Tour folklore. Although alone in this vast Alpine playground, I could hear the noise of the TV helicopters overhead and imagine the cheering fans lining the road. Every painted "Allez" on the double-digit slopes gave me a boost and each pained pedal stroke bound me further into the mythology of a sport taking on a fresh dimension by my own experiences. I used to ski down mountains on my holidays but now I ride up them – something I'd recommend to you all.

Cycling has indeed become a part of my daily life in London – to the extent that I now cannot imagine how I got about the capital without the use of my trusty black single speed steed. Riding is the best way to learn how the city's streets, parks and landmarks are all knitted together – and it really is much quicker (not to mention healthier and cheaper) than braving the crowds on the tube. Sure, it's pretty grim when wet, the pot-holes are a constant scourge, and some drivers treat you with disdain – but cycling around London, whether it's to and from work or simply to meet friends, has made me appreciate this great city even more.

Riding is the best way to learn how the city's streets, parks and landmarks are all knitted together – and it really is much quicker not to mention healthier and cheaper."
Felix Lowe

I'm not the only one: rider numbers have never been bigger in London, with some 645,000 journeys being made each day by bike (equivalent to one fifth of all tube passenger trips). And what with the Santander bike hire scheme and cycle friendly infrastructure – there's no excuse for joining the masses without feeling the need to wear the figure-hugging clothing.

So, did I succeed where Hannibal failed and reach Rome? You'll have to read my book (especially if you're a fan of Tim Moore's French Revolutions). But since my life-changing tour through Europe I've relished more climbs and punishment in the name of cycling. The hardest? Probably the brutish slog up to Plateau de Beille: the climax of the Ariégeoise sportive following 110 undulating miles in the Pyrenees. The sweltering temperature was a far cry from the monsoon that accompanied Joaquim Rodriguez's victorious ride there in last year's Tour – and my memories of that day only magnified the Spaniard's efforts in my eyes.

This July the Tour returns to Ventoux – the Giant of Provence – on Bastille Day in what could be the queen stage of the race. Froome, Nairo Quintana and Alberto Contador may be battling for yellow, but I'll have an eye out for the sheltered bend in the trees where I put on my rain cape, for the sweep in the scree where hail fell on me that September, and for the kink in the home straight not far from the Tom Simpson memorial where I finally overtook the rider who'd been in my sights since passing the Chalet Reynard (and stubbornly refusing a hot chocolate break).

My enjoyment of the world's biggest cycling race has only grown since I took to the saddle and added to the soils of Spain, France and Italy droplets my own sweat alongside those of the pros. Looking out for landmarks that I have seen or will see during the races on TV acts as some kind of sensory bridge between my own experiences and those of the peloton – making the month of July all the more satisfying. And now that my good friend Greg LeMond is part of the Eurosport team, every day I'm reminded of the time I overtook a former world champion on the Col de Saisies. Something I savoured for a little longer than eight seconds.

Felix Lowe is a freelance journalist, author and blogger who specialises in cycling, travel, entertainment and lifestyle. His first book, Climbs and Punishment: Riding to Rome in the Footsteps of Hannibal, was published in June 2014 by Bantam Press and was shortlisted for the Cross British Sports Book Awards. He is a contributor to the acclaimed Cycling Anthology and is perhaps best known for his Last Gasp column in Cyclist magazine and his Eurosport blog, Blazin' Saddles. He can be followed on Twitter @saddleblaze