The route is not technically difficult, so a mountain bike is optional.

Pancakes. Inattentive hedgehogs. English ale. Old car batteries. There are some notoriously flat things in this world. But few are quite as flat as the countryside of Norfolk, as our off-road ride along the Peddars Way demonstrates. The 46-mile long-distance trail stretches from Thetford, in the south of the county, to Hunstanton, on the North Sea coast. Initially, the lack of incline is a joy. It makes for an easy ride and a fast pace. But after 20 miles or so, it’s amazing how you start to crave hills – any sort of slope, in fact.

It’s not to be. Our journey starts at Thetford railway station, just a short stretch of A-road from the start of the Peddars Way trail. From then on, we’re off-road all day, following the route of an old Roman road that, two thousand years ago, would have taken sandalled feet through Boudica territory as far as The Wash.

Back then, centurions might have cursed the rough surface underfoot; nowadays it’s beautifully maintained – a combination of dirt paths, gravel tracks, forest trails, and short tarmac sections. The lion’s share is dead straight, with just the odd zig-zag as it carves a line south to north through farmland, woodland and the occasional village.

My chosen ride is a Giant TCX cyclocross bike. It’s perfect for the firm, flat terrain of the Peddars Way. Being lightweight and having its cables routed through the frame, it’s easy to lift over the gates and stiles en route. My friend Phil is on a heavier mountain bike that proves to be hard work by comparison.

The trail is often wide enough to ride two abreast so we do, chatting as we clock up the miles. We pass through some lovely villages – Little Cressingham, North Pickenham and, most memorably, Castle Acre, with its ruined castle and priory – and tea-rooms. Then it’s a 17-mile stretch of dead-straight bridleway all the way to Ringstead, just outside Hunstanton.

At times, we find ourselves in some quite remote areas. We skirt alongside the heath of Breckland, the deep woods of Thetford Forest, close to the Stanford military training area where Chinooks roar overhead, near to Massingham Marsh, and through enormous swathes of open farmland. With little woodland to block our views, we are surrounded by the big-sky panoramas that inland Norfolk is famous for.

There’s an old legend that the Peddars Way is haunted by the evil ghost of a huge dog called the Black Shuck. Over the years, there have been hundreds of reported sightings. ‘He will stand in your path and show his teeth,’ wrote MH James in his 1891 book, Bogie Tales of East Anglia. ‘He will snarl till you are almost paralysed with fear. Then he will sit down and stare at you with his eyes aflame. The dog sometimes drags you by your clothes. Untold horrors befall the man and woman who persists in thwarting him.’

Predictably, being a ghost, the Black Shuck doesn’t make an appearance. We don’t spot many corporeal animals or people either. During our entire ride, apart from in the car park at the start of the trail, we see no other cyclists. There’s the occasional hiker or dog walker, but only close to the villages.

Late that afternoon, we arrive at our Hunstanton guest house, which has amazing views out to sea. Hunstanton is unusual in that it’s an east coast town but, because it lies on the interior of The Wash, faces west. You get to see the sun setting over the sea.

The following day we embark on the second (much easier) section of our ride. This is the Norfolk Coast Cycleway, a traffic-calmed route that follows quiet public roads close to the coast; not to be confused with the pedestrian (and eminently prettier) Norfolk Coast Path. The first few miles take us down long, deserted country roads, hemmed in by tall hedges. It’s a shame because we know that just out of our view is the Norfolk coastline. But the main coast road is a bike-unfriendly A149. Better to suffer from a lack of views than to have to contest with Sunday drivers.

After passing through the well-heeled Burnham Market, we take a little detour into the Holkham Hall estate and its accompanying nature reserve, right on the coast. Here, an off-road cycle track through forest leads us to Wells-next-the-Sea where we stop to lunch on Norfolk crab, fresh from a seafood shack on the harbour front. This is classic English seaside territory, but with a distinctly upmarket feel.

Suddenly the landscape gets hilly. Well, slightly hilly; this is still Norfolk. But after a day and a half of flat topography, it’s a surprise. At one point – as the road rises into Weybourne – I actually have to drop into lower gears.

The final section of our ride is a fast swoop to the station at Sheringham. This is the northern tip of the Bittern Line that crosses the Norfolk Broads to Norwich. We jump aboard, along with a packed train of seaside day-trippers, and barely manage to squeeze our bikes into the jumble of assorted machines in the cycle rack. Then it’s a slow but pretty Sunday-service ride back to civilisation. And still no hills of any note. 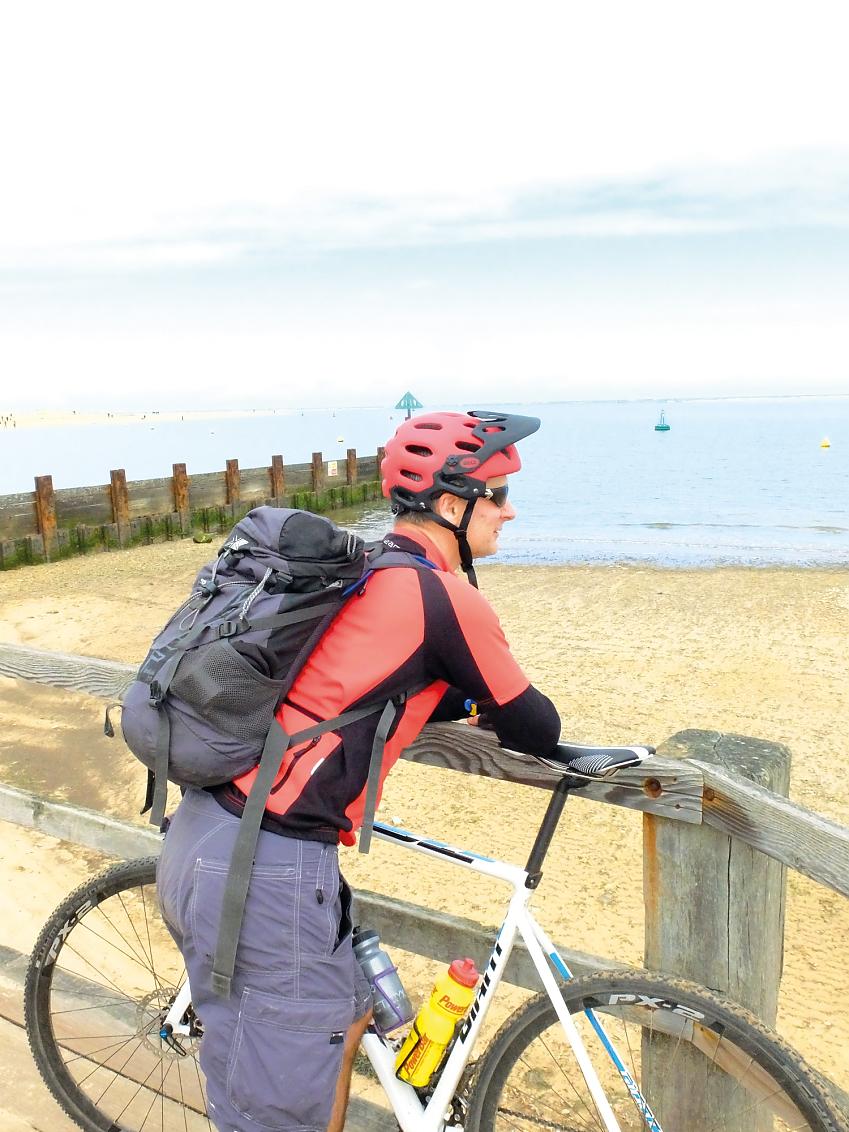 It's 46 miles along the Peddars Way to the coast, it's easily do-able in a day, given how flat the trail is.

This article was first published as Sloping off in Norfolk in the April/May edition of Cycle (the magazine for Cycling UK members).

If you'd like to help improve off-road access in England and Wales and win an iPad mini for doing so, then take part in our off-road survey before 31 October 2016.

Conditions: The Peddars Way is a combination of dirt paths, gravel tracks, forest trails and short tarmac sections. The Norfolk Coast Cycleway is all tarmac but on quiet back roads.

Maps/guides: We downloaded Ordnance Survey maps. The Peddars Way, however, is so well way-marked that you can get away with no map at all.

I’m glad I had: Thin knobbly tyres. The off-road section was so flat and dry that fat off-road tyres weren’t required.

With its flat and easy terrain, the Peddars Way is the perfect entry-level off-road trail, combining bridleway, tracks, and tarmac. The Norfolk Coast Cycleway that continues to Sheringham is mainly quiet roads.

A cyclocross bike is perfect for the entire route, and a touring bike with the right tyres would cope fine. We used Abellio Greater Anglia trains to get from and back to London, as it operates frequent services from Liverpool Street.

The Peddars Way starts at Knettishall Heath, just over four miles by road east from Thetford railway station. The Norfolk Coast Cycleway ends at Sheringham or Cromer; both towns have railway stations.

April / May 2016 View
Cycling UK continues to support the UK to cycle
This remains true during this difficult period with the ongoing threat of coronavirus Covid-19
Read our latest advice on cycling
Join Cycling UK to help us change lives and communities through cycling
Membership gives you peace of mind insurance, discounts in cycle shops, rides & routes
Join now