How do you ride off-road when you’re paralysed from the neck down? Cycle industry veteran Michael Bonney was determined to find out

When I woke up in hospital, after going out for a road ride one day, I couldn’t move my arms or legs. I had tubes stuffed down my nose and a hole in my neck attached to a ventilator to keep me breathing. I’d suffered a spinal-cord injury, having broken my neck at the C3 vertebra. Being injured and unable to ride your bike is probably every mountain biker’s worst nightmare. For me, it was permanent.

It’s worth noting that spinal cord injury covers a vast spectrum of disability. We’ve all seen the videos of Martyn Ashton and his fantastic feats, but his is a much lower injury than mine: he’s got use of his arms and hands. My break is high up on my neck, so I’ve got no movement from the neck down.

As you start to recover and adapt to the change, you realise that you’ve got to find new ways of doing everything you loved. So began the challenge of how to get me back out ‘riding’ again. I would need an off-road electric-powered wheelchair, steered by my head or chin. There is not a lot of choice, but I found a company in Milton Keynes called Molten Rock who made the Boma 7, based around two mountain bikes put together, and incorporating an electric motor, batteries and suspension. They were willing to look for a solution for my steering issues, and my friends at Hope were happy to help out. After a lot of fundraising (disability products make mountain biking look cheap!), I managed to get one on order.

My first ride out was up onto one of my favourite fells, overlooking Ullswater. The head control system wasn’t much use: it was a simple switch, right or left, so changing direction quickly (I use the term loosely) usually involved a skid and then a turn. I persevered, just happy to be out, and trips to Whinlatter and Hamsterley followed.

After a few phone calls and emails, we decided to swap to a chin control with proportional steering. This was duly fitted. It gave me a lot more precision at the price of having a joystick bouncing on my chin all the time. (I’ve never been interested in boxing and now understand why!) I attended some mountain bike enduro events and even managed the bottom half of Innerleithen downhill course, almost giving my friends heart attacks as I did so.

When all you've got to steer is your chin, 8mph feels exhilarating.

It was great to be out on the trails. I’d forgotten the feelings I had when I first started mountain biking almost 30 years ago; this brought them all back. More than that, the Boma 7 gave me independence. I live my life with someone close to me 24/7, just in case my ventilator stops working. Yet here I was out on the fells, speeding away from my support workers and not worrying about the consequences. The thrill of riding it was incredible, and I scared myself a lot of the time. While the Boma 7 is restricted to 8mph, which doesn’t sound fast, when all you’ve got to steer is your chin that feels exhilarating. Off-camber slopes and steep descents were a particular challenge, as I can’t move my bodyweight for balance.

Learning the Boma’s limits brought back memories of trying to learn how to ride a mountain bike all those years ago. And just being in the great outdoors after being confined to hospital wards and care home rooms for a year made me realise I’d taken my life before the accident for granted. It’s not an easy way to get your eyes opened.

As time went by, I realised that things could be improved on the Boma 7. The steering system wasn’t precise; the suspension didn’t give much travel or control; the batteries weren’t as good as those you can find on modern e-bikes. It was time for the inevitable tweaking.

Unable to make the changes myself, I’d managed to secure the services of Jack, an engineer from a charity called Remap. He designed a new front suspension system for the Boma. Reynolds provided steel tubing for it and BTR Fabrications did some very precise jigging and welding. Mojo sent Fox rear shocks for use on the front and rear wheels, and will tune them for me. My friends at Hope supplied headsets, seat collars, and a stem.

As I write this, we are still working on the modifications. We’ve made a lot of changes to the chin control and its programming. New batteries should provide more range and the ability to use more power on steep climbs. I should be able to ride more technical trails, including a lot of the routes I would have mountain biked.

A lot of my modifications will be incorporated in a new Boma 7.5. A new company, Equal Adventure (equaladventure.org), took over its production after Molten Rock went into administration, and they’re keen to develop it. I’ll be involved in that development, using my mountain biking knowledge to push forward wheelchair design.

I’m fortunate to have worked in the bike industry, spending almost 20 years at Orange Mountain Bikes, where I was responsible for marketing and heavily involved in product design and development. As well as using my improved Boma for recreation, I’ll be using it for work. I’m developing the Indenti Bikes range, and am working on a 160mm-travel enduro bike that will be in the shops soon. I will now be able to get out testing with riders to collect feedback.

I’ll also be able to attend more mountain bike events and chat to riders there. More importantly, I hope to show that people with severe disabilities can work in the bike industry; few currently do so.

I don’t think anyone really understands what it’s like having a disability like mine, where everything you once did is removed. The Boma 7 really has given me my life back. It lets me enjoy some things that I thought I would never experience again. 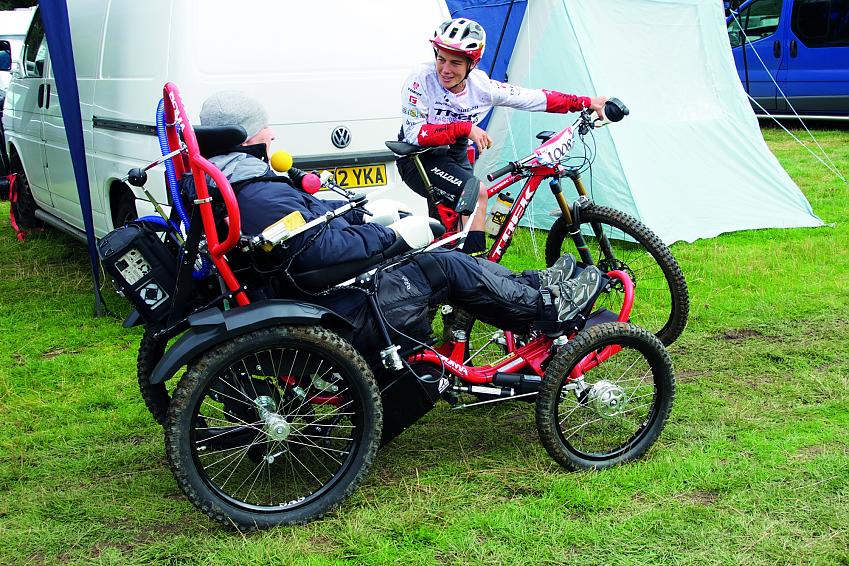 Above: Michael Bonney with Tracy Moseley at an enduro event.