Some years ago I had a meeting (European Standard for cycle trailers) in Munich, so I took my bike and week’s holiday to explore the Bavarian Alps. Son Matthew came too, sampling the city sights whilst I was in meetings and providing good company for the cycling to follow.

The Alps rise suddenly from rolling fields and woods, a day’s ride south of Munich. A bit too far, perhaps, for a chilly November day that left us both with sore knees. So we were grateful for ice-age glaciers and all the valleys and lakes they left behind, which let us enjoy views of mountains without having to cycle over them!

One night we slept at the foot of Neuschwanstein, the fairytale castle built by ‘mad’ King Ludwig II of Bavaria, inspiration of Walt Disney and film-set for Chitty Chitty Bang Bang. But with places to go and more things to see, we didn’t look inside. A few more days brought us to ‘the Bavarian Sea’, where we thought to island hop via Heerenchiemsee palace: another Ludwig creation. But unfortunately the Chiemsee ferries wouldn’t carry bikes, so we returned to Munich for a final Bier und Bratwurst in the Hofbrauhaus.

On the train home, I began to plan a more leisurely group tour, with time to take in the sights Matt and I had merely glimpsed. The plan came together in 2011, too late for the CTC Holidays advert but the tour filled quickly nevertheless. The combination of stress-free rail transport, no traffic worries thanks to bike paths wherever they are wanted, beautiful lake and mountain scenery without too much climbing, all of Ludwig’s amazing castles and palaces, and excellent Bavarian beer (culminating in the Oktoberfest), was obviously too good to miss! Another CTC leader repeated it in 2012 and I took a third group myself in June 2014.

I like a tour to have a theme. As I juggled with routes to get best value from the Bavarian Palaces Department 14-day ticket, it turned out to be possible to trace King Ludwig’s life story: beginning, of course, with his birthplace, Nymphenburg Palace, the royal family’s rural retreat, but now within the Munich suburbs. Then it’s downtown to the Residenz and seat of Bavarian power, into which young Ludwig was propelled by his father’s untimely death in 1864.

Although tall, handsome, intelligent and idolised by the common people, Ludwig was conflicted by homosexuality and Catholicism, then embarrassed by courtly attention and political failure. So he left politics to the politicians and retreated to the countryside. Here he spent his time – and the royal court entertainment budget – on fantastic architectural homages to a bygone age, when a monarch was not merely the figurehead on the ship of state, but absolutely its captain. 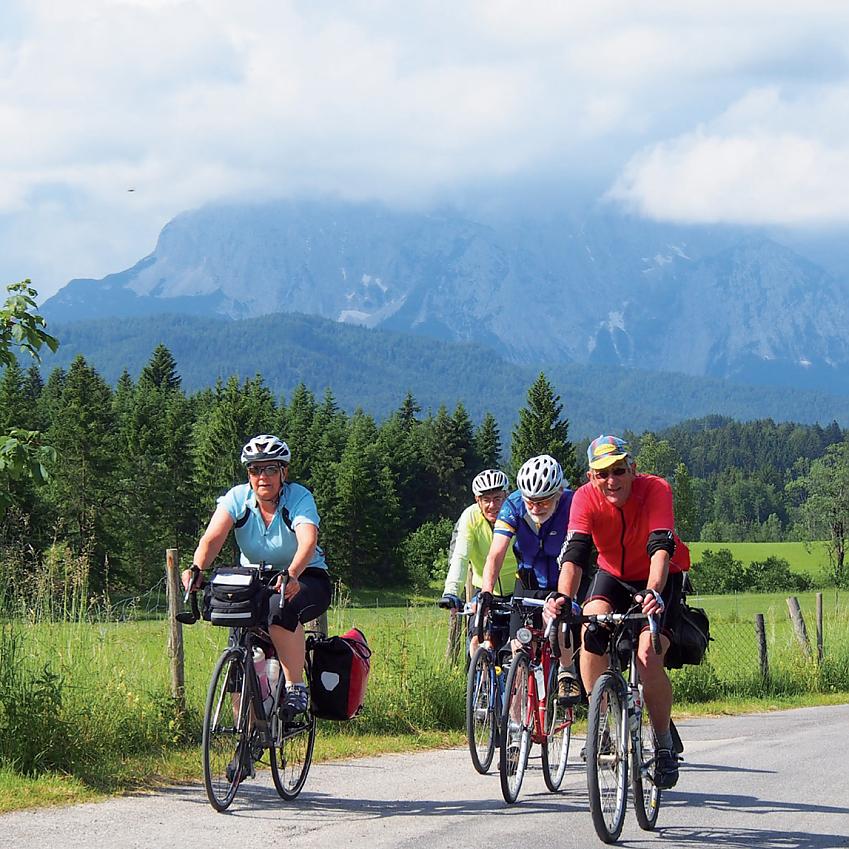 Cycling in the upper Isar valley

Before we left town, I organised a short sightseeing ride with a local guide, which incidentally proved an opportunity for group members to introduce themselves and tweak their bikes before riding too far. Although it doesn’t equal Holland (where does?), Bavaria is nevertheless a remarkably cycle-friendly region. Wherever you see a round-blue-signed bike path, it’s illegal to ride in the road, but those paths are so good you wouldn’t want to.

Where you see a round-blue-signed bike path, it’s illegal to use the road, but the paths are so good you wouldn’t want to.”

Ever since 1997, a German bike path cannot be compulsory unless it complies with national standards for width, surfacing and priority over side roads, which basically ensure it’s just as convenient as the adjacent road. This gives local authorities an incentive to bring their bike paths up to standard, or else they must remove the round blue bike signs and accept that cyclists will stay on the road. One may nevertheless ride the substandard paths, as indicated by a small bike ‘Frei’ (exempted) plate below the pedestrians-only sign. Most no-entry signs also have a bike Frei plate.

My tour left Munich through several parks and then into a forest. Here, away from roads, bike routes are not necessarily surfaced to the state of the art, and asphalt yielded first to smooth gravel, then rough stones. The worst bits of German cycle routes are seldom as bad as we commonly find in Britain and this wasn’t a problem for those of us on tyres of at least 32mm section. Mountain bike routes are something else and are best avoided when touring. I included one in 2014, but won’t be going that way again – not after almost losing someone over a cliff!

Food for body and soul

Our first Kaffee und Kuchen (elevenses) was by the Starnberger See, where Ludwig often escaped to from Munich. We drank our coffee and munched our cake with a view of the Alps across the water.

The are few better places to cycle than beside a lake, and this is a long one. Lunch was a picnic on a small island reached by electric boat, where Ludwig had planted a rose garden, hence Roseninsel. Then it was up through verdant, rolling farmland to an afternoon refreshment stop at the hilltop pilgrimage church and renowned monastery brewery of Andechs.

Pleasure for body and soul it says on the glass, and that’s how it is in Bavaria: home of the German beer purity law, the beer garden, and as many breweries as the rest of Germany put together. The ‘Biergarten’ originated when Munich brewers began to serve direct from the cellars, which were down by the river and shaded by chestnut trees to keep the beer cool. When innkeepers complained at the loss of summer trade, the beer gardens were forbidden from serving food. Thus began the tradition of bringing a picnic to the Biergarten, which persists even now that beer gardens can and mostly do serve food. To picnic, simply sit at tables without tablecloths.

Fortunately, it was only a short way and all downhill from the Biergarten on Bavaria’s Holy Mountain to our hotel, beside another lake with a view of the Alps. And that, I think, makes a perfect day on tour: enough cycling to exercise the body, with plenty of sights, scents, tastes and culture to stimulate the mind.

The following day brought us to the mountains at Hohenschwangau. Here we spent two nights, leaving a whole day to visit Ludwig’s first and most famous building project: Neuschwanstein. Some of us had views of the castle from our rooms, and when a thunderstorm blew up one night I spent quite a while on the balcony trying to photograph it also with lightning. Photoshop would’ve been quicker – and warmer!

Linderhof has an artificial grotto, with lake and stage for very private performances of Wagner’s greatest hits.”

In the next valley, and reached in a morning’s ride via Austria, stands the small but perfectly-formed palace of Linderhof, the only building Ludwig really finished! Several additional structures in the grounds include an artificial grotto, complete with lake and stage for very private performances of Wagner’s greatest hits, lit by one of the word’s first hydro-electric systems. Ludwig apparently didn’t mind modern ways when they brought his antique dreams to life! 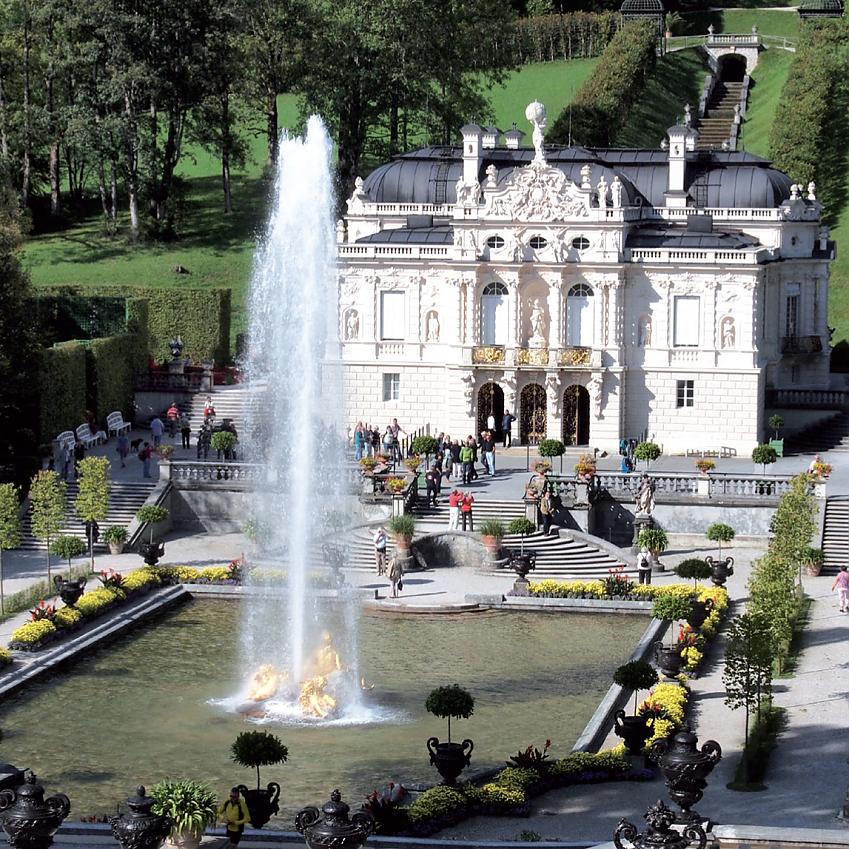 Then we enjoyed a Ludwig-free week of idyllic alpine valleys, lakes and mountains along the border, dipping in and out of Austria with a few of us also dipping in the lakes. Highlights included: Oberammergau’s painted houses; a free afternoon in Garmisch-Partenkirchen, where some took the railway and cablecar to Germany’s highest peak, the 2,962m Zugspitze; a cycle path by the Achensee; an especially pretty part of the Inn valley called the Butterbichl; and floating on my back in a sun-warmed Walchsee under the limestone cliffs of the Wilder Kaiser.

That was last June. In September 2011, we caught some bad weather here, riding out of the Alps and around the Chiemsee on a day of continuous rain that never got above 4°C.

Another day, another climate! Under blue skies, patchworked into a ‘weiss-blau’ Bavarian flag by fluffy clouds and patches of snow on the mountains, we rode the lake ferries to Fraueninsel and Heereninsel, so-named as island communities of nuns and monks respectively.

The nuns remain in-situ. The monks were evicted to construct the swan-King’s swansong: a slightly bigger version of the palace at Versailles built by his idol Louis XIV. Ludwig, unfortunately, didn’t have the funds, and his frantic borrowing attempts so embarrassed the Bavarian parliament that its leading ministers compiled a dossier of his eccentricities and pronounced their insolvent monarch insane – just like his already locked-up younger brother!

A few further days by idyllic lakes and mountains brought us back to the Starnberger See. This was the place where, on 13 June 1886, the day after his detention, the 40-year old Ludwig, though a strong swimmer, was said to have drowned in shallow water. So ended in mystery a life of dreams, which incidentally endowed Bavaria with a set of buildings that have repaid the debts of their fairytale King many times over.

It was also the end of our tour, with only a few kilometres mostly on cycle paths beside the river Isar, back into Munich, for a final Biergarten dinner. Ahh, those warm summer evenings of good company and long cool drinks under the chestnut trees. There is so much more to see in this big and most beautiful part of Germany, I’ll surely be back again.

This was first published in the February / March 2015 edition of Cycling UK's Cycle magazine.

You can fly to Munich from lots of places and take your bike on the S-bahn train into the city (except at peak). And there is a bike route for airport workers, but it’s hard to find from passenger areas. Plan your escape on www.opencyclemap.org and the maps at www.munich-airport.de.

The last issue of Cycle described the ferry and train route via Holland, which is slow, but works. Unfortunately, City-Night-Line trains no longer run from Paris, so Eurostar doesn’t connect anymore – except slowly with lots of changes. If you can bag your bike small enough, more convenient rail travel options become available.

Some of my tour participants have driven it, so clearly that’s also an option. 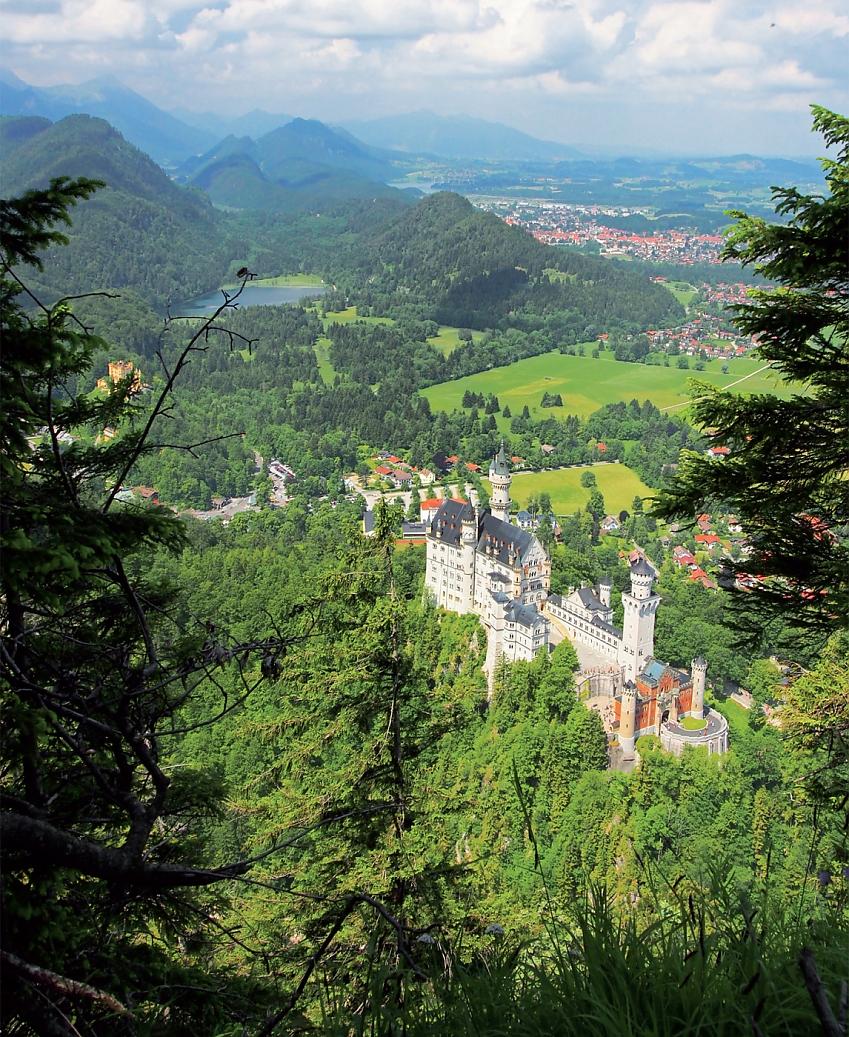 Anticlockwise loop south of Munich, playing hopscotch with the Austrian border via as many lakes as possible.

Touring/trekking type on 32 to 47mm tyres with wide-range gears.

Southern Bavaria has a continental climate and is at least 500m above sea level, so summers are really hot and winters cold. Lake and mountain areas also become very busy and expensive at midsummer, so spring, early summer and autumn are best for cycling – apart from the occasional wet day.

Plan your sightseeing with the Bavarian Palaces Department (schloesser.bayern.de) and get a 14-day ticket at the first of their places you visit. Discover Munich with Lenny’s Bike Tours (discovermunich.net). The easiest places to arrange a brewery tour are Andechs (andechs.de) and Paulaner (paulaner.de).

Oktoberfest: it’s just a bigger and more drunken than usual funfair that overfills and raises prices everywhere within a day’s ride of Munich! 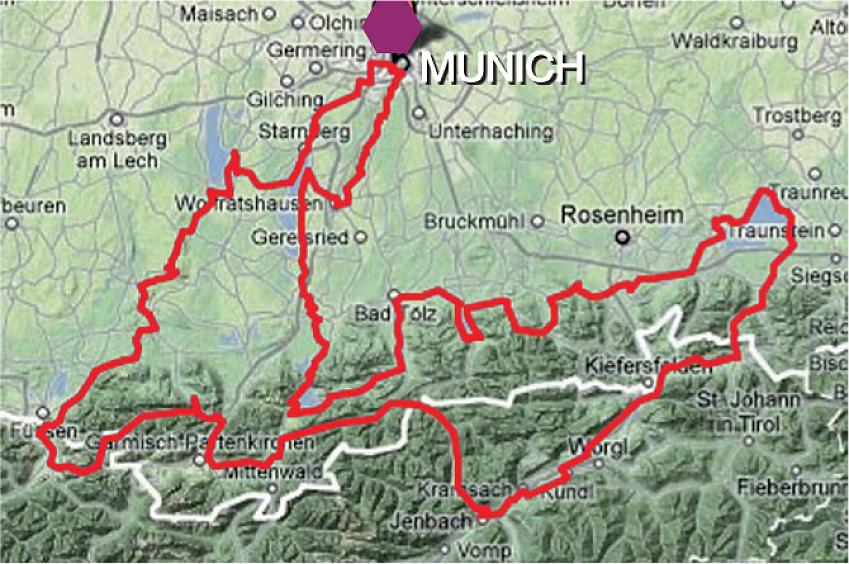