Every October, there’s a 100km randonée along the lanes of the New Forest: the Gridiron 100. Cycling UK’s Julie Rand rode it with her husband Roland. The ride will form part of our Challenge Ride Series 2017 and is the 15th event in the series of 16 handpicked rides. This year, it will take place on Sunday 8 October.

Traffic-calming in the New Forest comes in an unusual form: not speed humps or chicanes but horses, ponies and other animals ambling across the road. There are no roadside barriers so they can wander where they want within the forest; they’re constrained only by the cattle grids that mark its boundaries. It’s these numerous grids that gave rise to the name of CTC Wessex Cycling’s Gridiron 100km ride, which takes place in October every year just as the forest is at its most beautiful.

The Gridiron is the largest one-day event organised by a Cycling UK Member Group. Billed as an ‘on-road cycle randonée’ – randonée being French for ‘excursion’ – it differs from a sportive in that, although riders are aiming to complete the route within a specified time limit, it’s a touring event intended as a leisurely and sociable day out on the bike. It’s a test of navigation skills as much as fitness. Participants are expected to be self-sufficient: there’s no sag wagon if you have a mechanical, no chipped timing, no signed route, and no goody bag. But free tea and biscuits and a route card are included in the bargain £6 entry fee, and snacks are available to buy at the start and finish.

On a crisp and cloudless autumn day, my husband Roland Seber and I roll up at the event HQ in Lymington on the dot of 10.00am, well after the majority of the 1,000 entrants have departed. We collect our route sheet and yellow brevet cards, which we will get stamped at the two controls at 31.5km and 73.1km, and then at the final control back in Lymington. The figure-of-eight route around the forest is actually 108.8km.

Despite being among the last to sign on, we can’t resist a leisurely second breakfast of bacon rolls and coffee at the HQ before finally setting off at 10.30am. Thoughts of riding the route in a massive group of riders, all jostling for position, are quickly dispelled as we cruise down the empty lanes. The wide choice of start times from 8.30am onwards means that riders are well spread out.

The early mists soon burn off and it’s not long before we discard a couple of layers and enjoy a little warmth on our faces and arms from the brilliant sunshine. Heading east out of Lymington towards the historic hamlet of Buckler’s Hard, we glimpse the sparkling Solent and the Isle of Wight beyond through the hedgerows. It’s a fantastic day to be out cycling and we pedal along without a care in the world, carefully navigating our way past the villages of Sowley, East Boldre and Pilley, which sound like they belong in the Harry Potter books.

However, we’re a little too lackadaisical in our enjoyment of the scenery: we arrive at the first control in Boldre 15 minutes after the official deadline. We manage to get our brevet cards signed but thoughts of a leisurely pub lunch later evaporate. We’ll have to get a bit of a wriggle on if we’re to make it back to base by the deadline of 6pm and before the last of the tea and cake has been hoovered up by a 1,000-strong army of hungry cyclists.

The heart of the forest

Fortunately, the route is relatively flat and the weather promises a tailwind to help whizz us home. So there’s no need to panic just yet. More idyllic scenery and chocolate box cottages flash past before we’re ascending Rhinefield Ornamental Drive – a long and winding road through the heart of the forest that is lined with Douglas firs and spectacular giant redwoods.

We cross cattle grids at regular intervals as we climb steadily towards the highest point of the route at Nomansland, steering carefully around any beasts who have taken up residence on the road – or who look like they might be just about to do so. They’ve every right to be there, after all. The practice of ‘turning out’ horses, ponies, cattle, donkeys, sheep and pigs to graze the common pasture and keep the vegetation at bay probably dates back to before the creation of the forest by William the Conqueror in 1079.

A slightly confusing instruction in the route sheet means we have to check our Ordnance Survey map to make sure we don’t end up wasting valuable time heading the wrong way. Time is running out to reach the second control – and we don’t want to miss our free tea and biscuits a second time, especially as we hadn’t had the time or forethought to stock up on something for lunch.

We glide downhill to the pretty village of Godshill and turn sharp left. Several warnings on the route sheet of fords to be crossed are unnecessary: the gloriously dry recent weather means there’s not a drop of water on the road. We reach the control with 15 minutes to spare.

After a welcome breather, we finally catch up with some of the tail-enders and play cat-and-mouse up and down hill as we ride the last leg back to Lymington. One group takes a right-hand turn that I’m convinced is wrong and we’re no longer the lanternes rouge. Yes, I know it’s not a race but the clock is ticking… 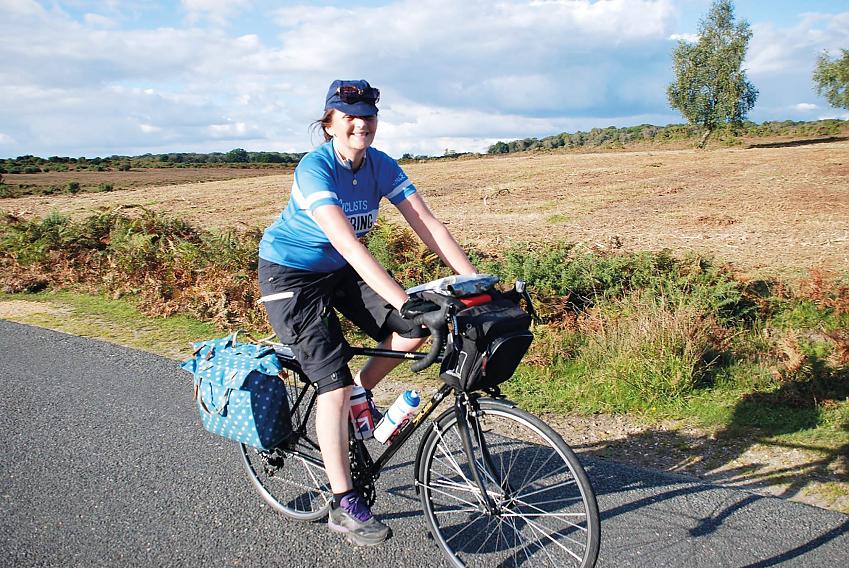 Above: Julie Rand on her Spa Cycles Audax

Roland is recording the route on his GPS and thinks we won’t make it back till nearly 6pm but I’ve got the printed route sheet and calculate that we only have a dozen miles to go so should be back by 5.30pm. The wide-open-skied heathland of the north western corner of the forest gives way to the suburbs around Ringwood. Then we’re meandering back into tree-lined lanes of breath-taking beauty.

The dazzling sun is sliding towards the horizon and a sudden chill in the air sends a shiver down my spine. Cars approach us with their headlights on, reminding us that it’s autumn and darkness is fast approaching. The first fallen leaves whirl around in wind-blown eddies. I start to think of cosy log fires.

We feel a sense of urgency to pick up the pace yet again; we don’t want to be the last to finish. But it’s only just 5pm as we finally pull into the community centre in Lymington. Flush-faced finishers are happily milling around and there’s still plenty of cake.

Everyone is high on sugar, fresh air, sunshine and endorphins. We sign in for the last time and collect our completed brevet cards before buying a commemorative medal. It may not have been the longest or hardest ride we’ve ever done but there is something very satisfying about receiving a tangible souvenir for your efforts.

We chat to Mukhta from Cycling UK affiliated Christchurch Bicycle Club. It was her sixth Gridiron and her best. She says: ‘The route was wonderful, a lot less strenuous than previous years.’ All ages of cyclist are present – the youngest finisher is just eight years old and the oldest 82 – and there are many varieties of machine, from old-style steel tourers with panniers to the fixies ridden by the slickly coordinated riders from Bournemouth cycle café Velo Domestique, and the Pashleys of the ‘Guvnor’s Assembly’.

Cycling in the New Forest is not without its critics. In recent times, a rise in the popularity of sportives has led to conflict with other road users and locals, and calls for organised rides to be banned or limited. In 2014, the Gridiron route was changed at the last minute to avoid a clash with a large commercial sportive run on the same day.

However, the Verderers (the official guardians of the New Forest) recognise that the Gridiron, not being a race, does not pose a particular problem. In fact, thanks to long-term organisers John Jackson and Mike Walsh of Wessex Cycling CTC, and the many other wonderful volunteers, next year’s ride on Sunday 8 October will mark the 25th consecutive running of the event. 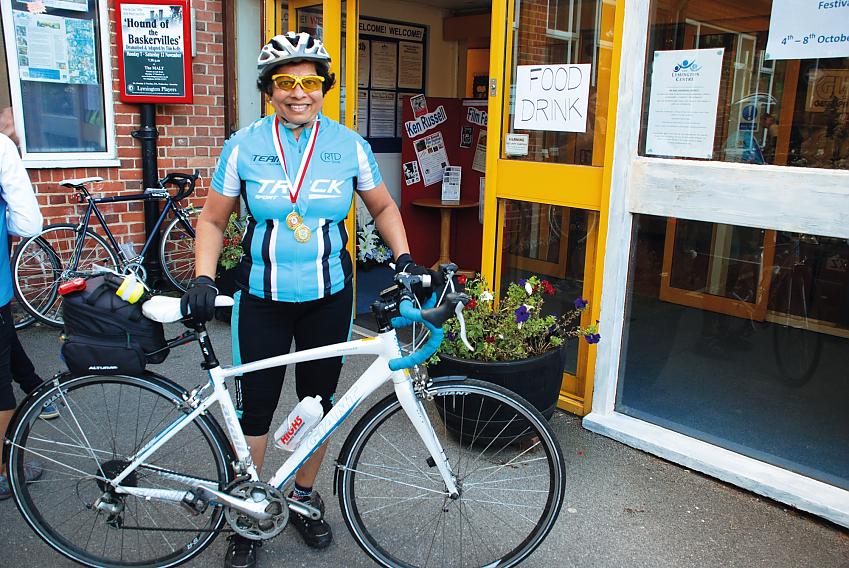 Above: Mukhta at Lymington with her medal

The Gridiron is over for another year but there are other opportunities to embrace the off-season, plenty of Cycling UK events to bring a glow to your cheeks and an appetite for all that hearty winter food, and audax events even in the depths of December and January. See Cycling UK’s events guide cyclinguk.org/event or visit aukweb.net/events. Early entry is advisable as these popular events often fill up early. If you fancy something shorter, find out what your local group has on offer at cyclinguk.org/local-groups. Most of them have regular rides throughout the year, whatever the weather!

When: Second Sunday in October.

Where: Starting and finishing in Lymington, Hampshire.

Distance: 108km circuit of the New Forest. This year’s route was a figure-of-eight that took in much of the north-western and south-eastern sections of the forest.

I’m glad I had… OS map, lots of layers for the fast-changing autumnal weather, lights, and a bar bag with a map holder so I could check directions on the move.

Next time I would… Set off earlier to make time for a pub lunch. Back up written instructions with a Garmin or similar device.

we glimpse the sparkling Solent and the Isle of Wight beyond through the hedgerows. It’s a lovely day

December 2016 / January 2017 View
Cycling UK continues to support the UK to cycle
This remains true during this difficult period with the ongoing threat of coronavirus Covid-19
Read our latest advice on cycling
Join Cycling UK to help us change lives and communities through cycling
Membership gives you peace of mind insurance, discounts in cycle shops, rides & routes
Join now