They were the pages I probably gazed at most in the Cycle magazine, eyes absorbing a list of destinations, dates, prices and possibilities. Eight days cycle touring around southern England for under £150. Ten days in northern France for £250. Fifteen days in Czechoslovakia for £350. Twenty-three days cycling around New England for ‘over £900’. All those touring holidays, along with 70 others, appeared in the December 1991 issue of CT&C (Cycle Touring & Campaigning), as Cycle magazine was then.

I was a new member of CTC, a London cycle commuter and activist who had rediscovered cycling as a convenient way of getting to work. The cycling holidays that the club offered intrigued me. What sort of people went on them? What sort of bikes did they ride? How fit were they? I pondered this every December for another six years.

Touring holidays have been part of Cycling UK from the beginning. They were discussed soon after the Bicycle Touring Club was founded in 1878. Later, operating as a department within the club’s London office, the reassuringly official-sounding Touring Bureau offered members travel advice, prepared documentation, and routes for self-guided tours abroad.

Touring holidays have been part of Cycling UK from the very beginning.

The first modern tours programme arguably took place in 1949, when 20 members (out of 300 applicants!) embarked with a leader on what must then have been an ambitious trip to Sweden. From then on, CTC’s cycle holiday business became a core part of the club’s activities, with staff engaged at national office to administer what was to become a worldwide programme of trips.
Changes to travel legislation required changes to the way the holiday business operated. By the late 1990s, CTC’s holiday company had evolved into pretty much what we have now: a fully-bonded tour operator offering a unique travel experience exclusively to members, run and led by other members.

By this time, CT&C had become Cycle and after eight years of membership, I’d rashly booked a place on a tour of Cuba. I could write a long indulgent article about that tour, but I won’t… much.

We boarded an air-conditioned coach on a warm January day in Havana, leaving our bikes with the professional mechanic in the mobile workshop. A specialist sports masseur was part of our entourage. It was fantastic but perhaps not, as my roommate Tony told me, a typical CTC tour.

The leaders were Maurice and Anthea, who had met each other on a previous CTC tour and now led their own tours, specialising in trips to Italy. That’s often how it works: leaders have their own individual style and favoured destinations.

Also on that tour were a group of North Americans: Bob, a Canadian who was a CTC tours regular; an American couple in late middle age, who had fantastic outlook on life; and their friend John who, like them, was a member of the Los Angeles Bike Coalition. The Americans were great fun to be with. They drew attention to the Cuban motorists’ skills in coaxing life from 1950s’ American cars.

Due to the trade embargo at the time, US citizens were discouraged from travelling to Cuba. The Americans had travelled via Mexico to join us. As we cycled from one Soviet-built hotel with a pool to another, they elaborated: ‘It’s worth the hassle, Gary. CTC tours are the best kept secret in cycling.’

Clichés are clichés because they’re true. I spent the flight home on the Air Cubana DC10 thinking about where I would cycle with our club next, and when.
Scandi drama

The answers were ‘Norway’ and ‘the following August’. I’d been told where to rendezvous at Newcastle ferry port with leader Brian Curtis – a lean, relaxed Mancunian and now a long-term resident in Scotland. But it’s pretty easy to find a CTC Cycling Holidays group: you just look for a load of bikes. I found them and made friends with Linda, Crispin and John on the overnight trip to Bergen.

Brian gave us a practical briefing about weather, mountain climbs, descents, and the surprisingly long road tunnels. His leading style is relaxed. Each morning would begin with a reminder about the route ahead, and then we generally cycled at our own pace, meeting up at rest stops throughout the day.

My roommate in Cuba had been right when he said that that tour was not a typical CTC tour. The Norway tour didn’t come with an air-conditioned coach or a masseur, and any repairs to my bike needed to be carried out by me, with the enthusiastic assistance of other participants. That is typical of CTC tours: if there are problems, participants help – as, of course, do the leaders, who have years of experience of this type of thing.

I had trained and prepared for the Norway tour and was probably as fit as I had ever been. But the finger-aching, freezing descents were a revelation, and so was the rain, the snow, the sun, and the rain again – all in August! We spent our evenings in sociable hostels or overpriced (to us) hotel bars. One evening we were guests at the village sweetshop, which doubled as the only B&B for miles. The variety of accommodation was part of the adventure.

I enjoyed Brian’s trip so much I joined his next one, which was to Nova Scotia. (He specialises in fairly adventurous destinations and camping tours, it turned out.) Once again, I rendezvoused with my fellow travellers, spotting them with their bikes at the airport.

You meet interesting people on every CTC tour. My roommate on this one was Dennis, who had joined the RAF in the 1930s and worked alongside Barnes Wallis and Geoffrey DeHavilland. He had helped develop the then pioneering concept of jet engines, and as a consequence of being yards away from them when they roared into life was now a little hard of hearing. Later in life, he’d owned a ballroom dance studio ‘until the Beatles came along – then we were done for’. For someone in his 70s, he was a fine cyclist too.

One couple on the tour were on a break from the West End production of the musical Cats. Young, fit, funny, and fabulously good-looking, they were both far too nice to be the kind of people you love to hate. Also on the trip were four lads from Belfast with broad accents, who were just as funny.

Friendships begin on tour – and sometimes more. Two of the group on the Nova Scotia tour got married a few years later; I went to their wedding. It was on the same tour that I first spoke to the woman who later became my wife. Two participants on a tour that I led – a US chap and an Australian woman – are now happily married in Oz. It’s inevitable that participants meet other like-minded people on tour.

Friendships formed on tour can be long-lasting too. Bob, whom I’d met in Cuba, came to stay for a night at my home in London. We had kept in touch via email. Bob was on his way back to Canada after a two-week CTC tour with Peter Crofts. ‘What a tour!’ he began, launching into tales of his trip with Peter and friends.

Peter is a bit of a celebrity among cycle tourists, having led 119 tours. His first was in 1961 to Switzerland. He still has his carefully-typed booklet of tour route directions provided to clients, including specific information on the type of currencies to take and rendezvous details for the romantic-sounding overnight boat-train from London Victoria.

Tours today are still promoted with a prospectus, in which leaders explain the location, riding, accommodation, and if possible surfaces to be ridden on. Leaders also include a short biography about their experience and leading style, along with their contact details. All leaders are more than happy to advise a potential participant how suitable a particular tour may be for them.

The tours themselves are as varied as their leaders. Some enjoy taking their clients to far-flung destinations. Others, like me, stick closer to home. I still enjoy travelling further afield with others as tour leaders – now known as tour managers. Since my trip to Cuba, I’ve had CTC cycling holidays in Iceland, South Africa, the Czech Republic, Poland, Slovakia and Romania.

All have been thoroughly enjoyable but, of course, different from each other and from my own tours. Tour managers have their own style and they don’t follow a set programme each year. But what I like to think I have in common with Maurice and Anthea, Brian, Peter, Lyndon and Caryl, and all our other tour managers is that I want our participants to have a great time cycling in great company. I’ve made friends, got married, helped other marriages come about, and cycled in places I might never have been to otherwise. Our club has been part of all that. The best kept secret in cycling? After all this time, it still is. 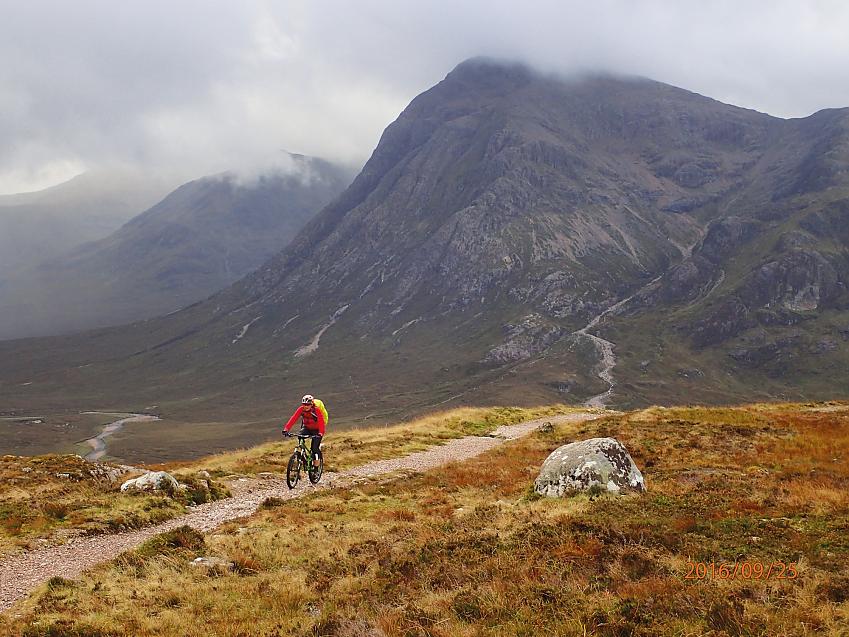 Above: The Devil's Staircase from the West Highland Way Tour by Paul Rogers.

All tours are run by and for Cycling UK members. As they’re run on a not-for-profit basis, the holiday only has to break even, so leaders can organise tours wherever they want to go. All tour leaders are experienced cyclists and have arranged tours for many years. CTC Cycling Holidays is a member of ATOL, ABTOT and ABTA, who provide financial protection.

There are five formats:

Each tour is graded:

For more about CTC Cycling Holidays and Tours, visit cyclingholidays.org

C'est magnifique! How to enjoy the Semaine Federale View

11 essential things to pack when cycle touring View
Cycling UK continues to support the UK to cycle
This remains true during this difficult period with the ongoing threat of coronavirus Covid-19
Read our latest advice on cycling
Join Cycling UK to help us change lives and communities through cycling
Membership gives you peace of mind insurance, discounts in cycle shops, rides & routes
Join now