It has hills, some hectic and confusing road layouts, disjointed bike routes, those pesky tram tracks, and it’s crazy during the Festival; the active local cycling campaign has plenty to talk about. But still, cycling is the best way to get round wonderful Edinburgh, one of the world’s great cities.

Indeed, the trundle up from Waverley station and Princes St to the Castle, then down the Royal Mile’s cobbles to Holyrood and the Scottish Parliament building, and then up the lanes towards Arthur’s Seat for a glorious view of the city, is one of the world’s most special urban bike rides. That handful of miles could take you all day. (Walk round the Parliament’s bike racks – viewed from the right point they line up to form a bicycle shape.)

Some good (mostly) traffic-free routes get you into and out of the centre. NCN1 comes in from the east dramatically on a railtrail underneath Arthur’s Seat, and NCN75 / 754 takes you out west along a canal towpath (good for families) all the way to Falkirk Wheel and ultimately, still canal-side, to Glasgow.

NCN1, meanwhile, strikes out northwest on car-free paths and quiet lanes to the Forth Road Bridge, whose bike paths across to Fife are an outstanding cycling experience. Exactly how cycle access will be affected for good or bad by the opening of the new Queensferry Crossing upstream, planned for summer 2017, remains to be seen.

Edinburgh’s central ‘valley’ seems, oddly, to lack a river where you expect it (the railway goes there, though). The nearest thing to that is the Water of Leith, whose stream-side cycle path (not always with foolproof signage) takes you from the centre to Leith itself.

Cycling groups and clubs in Edinburgh

https://www.facebook.com/events/1446321305581437/?ref=3&ref_newsfeed_story_type=regularEdinburgh branch of the movement that gets more women cycling

Active local campaign for better cycling in Edinburgh and around

What to take with you on your ride

The only thing you really need for cycling is a bike. And maybe a phone, and credit card: in Britain you’re only a call away from any service you might need.

But unless money is no object, it’s wise to take a few things with you on a day ride. A saddlebag or rear rack and panniers are best for carrying stuff. A front basket is second best. A rucksack is third best. Your sweaty back will soon tell you why.

Cycling short distances in jeans and t-shirt is fine, but on a long or strenuous ride – over ten miles say, or in hills – those jeans will rub and the t-shirt will get damp and clingy. Shorts or, yes, lycra leggings and padded shorts will be much comfier, and merino or polyester cycling tops wick away the sweat, keeping you dry and comfy. (They don’t have to be lurid colours.)

If rain’s in the air, pack a rainproof top. If it might turn chilly, take a fleece or warm top. But the thing you’re most likely to forget is the sunblock.

It’s remarkable how often you enjoy being out on the bike so much that you suddenly realise it’s getting dark. So take lights (which are legally required at night). They’re price of a sandwich, take no space, are easy to put on thanks to tool-free plastic clips, and the batteries last for ever.

Take a puncture repair kit (with tyre levers) and pump. Make sure it fits your valves, which will be either ‘Presta’ or ‘Schraeder’ – realising they don’t match is a very common roadside discovery! Carrying a spare inner tube (make sure it matches your tyre size) makes puncture repair much easier: mend the old one back at home. If you do get in trouble, some kindly passing cyclist will probably stop to help.

Using a helmet is a personal choice – they’re not legally required.

Cycling makes you thirsty, so take lots of water. Long-distance riders talk about ‘the bonk’ – a sudden loss of energy rendering you almost stationary. It’s miraculously and instantly cured by eating something sweet. On short rides you’re unlikely to run out of energy, but just in case, take a snack like flapjack, banana, chocolate or jelly babies.

Taking a packed lunch or picnic will save you money, though that hot drink and cake in a cosy cafe could yet prove very tempting!

Your phone GPS could be invaluable for showing where you are when lost; you can download free detailed UK maps and GPS software before your trip.

Paper maps are still useful, though, so take one: no power source or wifi signal required, and they’re great for suggesting possibilities or changes of plan.

What have we missed? Recommend your favourite routes using the comments box below.

Getting round Edinburgh, and local loops

Cycle A-way’s list of routes, maps and resources for Edinburgh

Make sure your bike is working
(from our partners, Halfords) 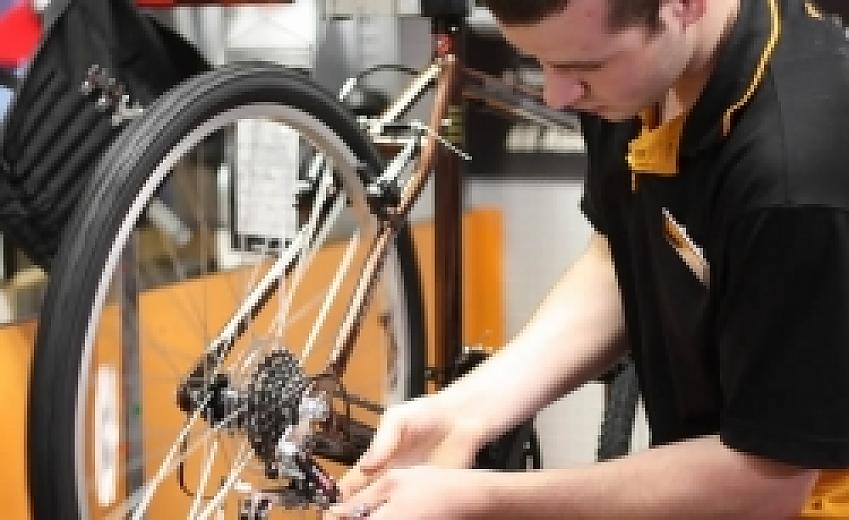 Creaking cranks, wobbly wheels or slipping saddles are the last thing you want, but Halfords' guide to basic bike maintenance will keep you rolling smoothly. Whether you’re a regular commuter, a leisurely weekend rider, or prefer to tear it up on a serious MTB trail, signs of wear and tear might keep you off the saddle from time to time. Whilst we can’t promise to banish those roadside mishaps, we can help keep your bike tip top with our top tips!

You’re heading out on your lovely bike, with a pannier packed with your essentials. A glorious route lies ahead, but then you run into a spot of bother! Most of the time there are handy hacks you can do to tide you over whilst out and about, and we’ve taken a look into the most common bike problems and solutions…

Clicking saddle? Check that the bolts connecting the saddle to the seat post are not loose. Tighten until the saddle is firmly secured using an allen key from your trusty toolbox!

Squealing brakes? This could be down to dirt or oil on the brake pads. Give it a quick wipe down, then when you get home take the brake pads off and readjust.

Squeaky derailleur? A little lube should help. Remove any excess.

Some of the problems you find with your bike might need a closer look, and here’s where we can help!

Wobbling disc rotors, spongy brakes and rattling bolts needn’t be as pesky as they sound for long enough to keep you off your bike! Call and see us with your two wheels at your local Halfords, or with any other bike bothers you might have.

From as little as £15 a year, Halfords will take the labour out of looking after your bike. Halfords offer a range of care packages, they provide free fitting on all parts and accessories bought from Halfords, and even include an annual service worth £50 as part of the plan!