How can we stop bad drivers getting away with murder? That’s the focus for Cycling UK’s public debate on Road Justice. Rhia Weston explains.

One year on from the launch of the Road Justice campaign, Cycling UK will hold a much-needed debate on sentencing of driving offences. On 13 June, Cycling UK president Jon Snow will chair the debate, which will see two leading barristers, a representative from the Crown Prosecution Service, a judicial expert, and a criminal law expert deliberate how sentencing guidelines can be improved to discourage bad driving.

You can join in the debate by submitting questions to the panellists. If you use Twitter, tweet your questions on 13 June using #CyclingUKdebate. Those unable to get involved on the day can email questions prior to the event instead to rhia.weston@cyclinguk.org.

The objective of this debate is to influence the forthcoming review of sentencing guidelines for serious driving offences, announced by the Government in 2013. The current guidelines, and the way they are being applied by the judiciary, have been shown repeatedly to fail to do their intended job. They should ensure offenders are sentenced appropriately and proportionately to the seriousness of their offence, and to ensure consistency in sentencing.

If this were so, we wouldn’t hear of cases like these: driver sentenced to 240-hours of unpaid work and a mere one-year ban for killing a cyclist whilst he ate a sandwich at the wheel of his car as he drove between 55 and 60mph; driver given six-month suspended sentence, a one-year ban and ordered to do 200-hours of unpaid work for killing cyclist whom she had 11 seconds to see before ploughing into him.

Sentences like these give the impression that road crime is not taken seriously by the justice system. What’s more, judges’ reluctance to impose long driving bans reinforces the false idea that driving is a right not a privilege. The majority (65%) of disqualifications given for careless driving and driving licence offences (which carry discretionary bans) are for less than a year.

The situation is little better for more serious offences: the top graph overleaf shows how bans given for causing death and injury by driving offences (which carry mandatory disqualifications) rarely exceed three years. Lifetime bans accounted for less than 1% of all bans imposed in 2012.

As well as bans being short, they are also used less frequently now than seven years ago. There was a 47% drop in the number of disqualifications imposed between 2007 and 2012, despite the number of road casualties falling by only 27%.

Sentencing guidelines need to be overhauled to reflect the fact that the irresponsible use of a vehicle is a serious crime with potentially life-changing consequences for both victim(s) and driver.

In May, Cycling UK welcomed the Government’s announcement to extend custodial sentences for drivers who cause death whilst disqualified, unlicensed or uninsured from two to ten years, as well as the introduction of a new offence of causing serious injury whilst disqualified, which will carry a maximum four-year prison term. The Government also plans to make driving whilst disqualified an ‘either way’ offence, and to increase the maximum penalty from six months to two years’ custody. Cycling UK also wants judges to make greater use of vehicle confiscation to prevent such drivers from getting back behind the wheel.

There is clear public and political momentum for a change in how driving offences are handled by the justice system. Outrage at the lenient sentencing of bad drivers who kill has led to the creation of several online petitions calling for tougher sentences. The petition set up by the family of Jamie Butcher, killed as he crossed a pedestrian crossing in Cambridgeshire in 2011, led to the Government committing to review sentencing guidelines. The petition set up by the family of Ross and Clare Simons, killed whilst cycling on their tandem in Bristol in 2013, led to a cross-party parliamentary debate on dangerous driving in January of this year.

Lenient sentencing is not just a product of unsuitable sentencing guidelines. It is also caused by the prevailing trend within the justice system to treat bad driving that causes injury or death as merely ‘careless’. This trend is demonstrated by the dramatic drop in the number of prosecutions for ‘causing death by dangerous driving’ after the introduction of the offence of ‘causing death by careless driving’ . It suggests that many cases that would have previously been prosecuted as dangerous driving are now being prosecuted as careless driving. 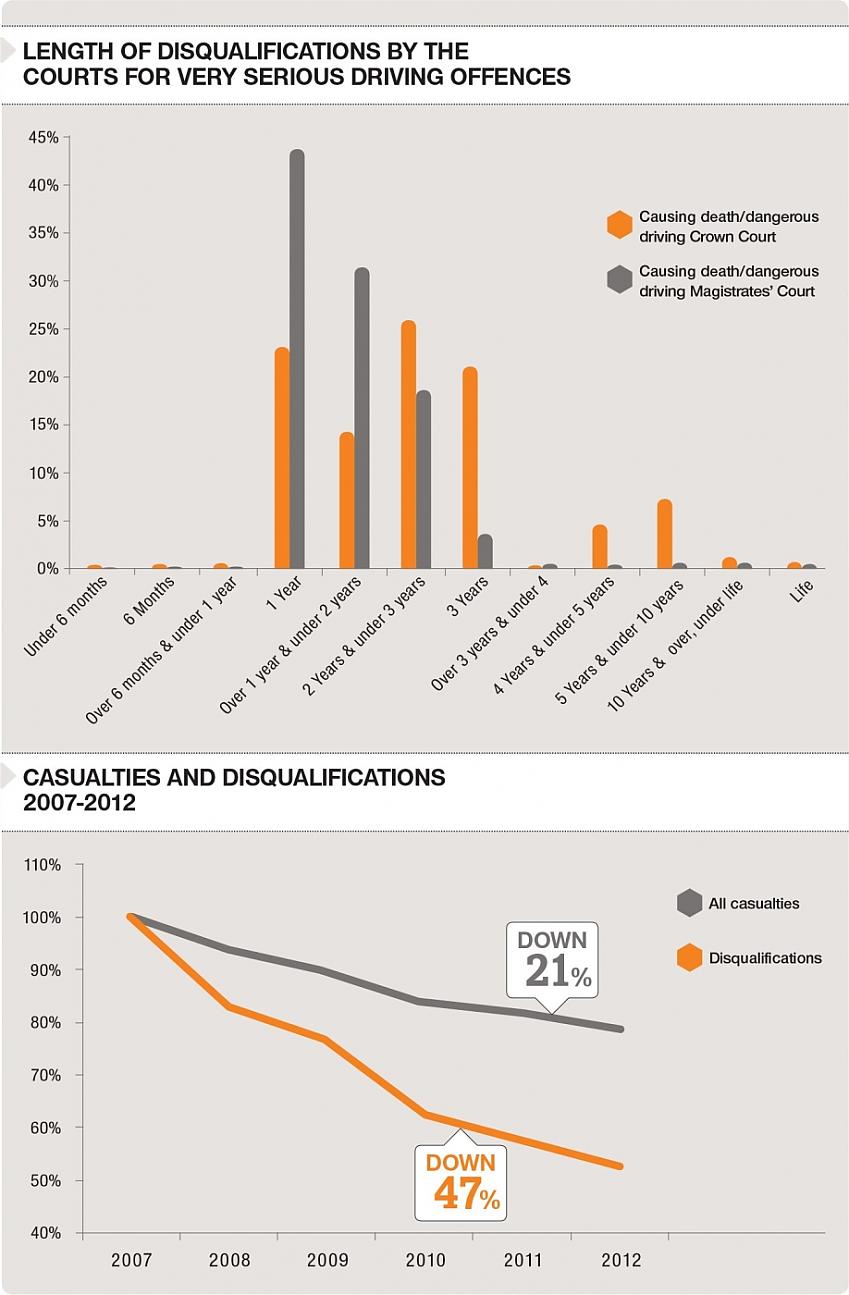 Favouring of ‘careless driving’ over ‘dangerous driving’ is in part a result of inappropriate charging standards and imprecise definitions of what constitutes ‘careless’ and ‘dangerous’, which make it difficult for prosecutors to make objective and consistent charging decisions. Downgrading, which is when the courts accept a guilty plea to a lesser offence, is also a problem – one that Cycling UK fears will be exacerbated by the Government’s encouragement of prosecutors to accept guilty pleas in order to limit the cost of protracted court cases.

Cycling UK fears that the establishment of regional traffic courts (29 of which were set up last year) will lead to increased dismissal of dangerous driving as careless. These courts will deal with low-level offences, such as traffic light and document offences but can also be used for careless driving. The police, rather than the Crown Prosecution Service, make the charging decision in careless driving cases and can also prosecute ‘either way’ offences, including dangerous driving, if a guilty plea is anticipated. Although traffic courts will cut bureaucracy and speed up the justice process, freeing up resources for more complex cases, there is a risk that if the police do not correctly interpret careless driving as driving that did not cause danger, more acts of dangerous driving will be undercharged.

Most victims of road crime lack accurate and timely information about their cases because they are denied victims’ services, and this also contributes to undercharging. Victims injured by speeding drivers, drink drivers, and careless drivers are not recognised as victims of crime and therefore are not included in the Victims’ Code, which delineates who is entitled to victims’ services.

Cycling UK’s proposals have been published in two Road Justice campaign reports: 1) Charging and Prosecution; and 2) The Courts and Sentencing. Both can be downloaded from www.roadjustice.org.uk/road-justice-reports. The proposals for improved sentencing practice will be discussed at the debate on 13 June, mentioned at the start of this article.

In order to tackle the problems of under-charging, the Road Justice campaign is calling for a full consultation and review of the guidance used by police and prosecutors when deciding what charge to bring against a driver (known as charging guidance). Cycling UK wants the revised guidance to include clearer definitions and more appropriate examples of dangerous and careless driving.

The campaign is calling for prosecutors who handle serious and fatal road crime cases to undergo standardised national training in road traffic law in order to avoid dismissal of dangerous driving as careless. The campaign wants manslaughter to be the default charge in road death cases where there is evidence the driver engaged in wilful risk-taking or intentionally caused danger.

Cycling UK is demanding greater transparency from the police and CPS at a national and local level about who is making charging decisions and why. Cycling UK is also calling for the number of road crash victims and drivers involved in crashes to be counted in crime statistics, and for information on the mode of transport of the victim and the road user involved in causing the incident to be collected. At present, no such data is gathered. And finally, Cycling UK wants drivers who seriously injure or kill to be given immediate driving bans as a condition of bail, to prevent them from endangering others and to avoid victims’ distress at seeing them driving.

The Road Justice campaign is calling for the planned review of sentences for driving offences to be conducted as soon as possible, and for the revised guidelines to emphasise that failing to have a proper and safe regard for vulnerable road users is an aggravating factor when it comes to sentencing.

Cycling UK is calling for substantial driving bans (i.e. of ten years or more) and other non-custodial options such as re-testing, suspended sentences and vehicle confiscation, to be used for drivers who cause unintentional danger or who drive carelessly. Cycling UK believes greater use of non-custodial options for such offenders would make jurors more likely to return a guilty verdict and prosecutors more likely to press for the tougher charge in the first place. The worst drivers – those who drive with intent to endanger, who engage in wilful risk-taking, or who breach driving bans – should be treated with a much heavier hand in the form of long or lifetime driving bans, coupled with custodial sentences.

Cycling UK also wants judges presiding over serious and fatal cases to receive specialist training in road traffic law and cycle safety issues to avoid making comments during sentencing tantamount to victim-blaming, such as referring to a deceased person’s decision not to wear high visibility clothing.

Working with the police

The first campaign report ‘Road Justice: the role of the police’, which called for improved road crash investigations, better resourcing and training of roads police, and greater support for road crash victims, has been well-received by police forces in England and Wales. Over two thirds of forces have sent Cycling UK their views on the report’s recommendations. And 85% of those that responded agreed with all or some of the proposals. (Check how the force in your area responded: go to www.roadjustice.org.uk/police-petition-map.)

Several forces have voiced interest in engaging with Cycling UK in order to implement the recommendations, and a few have either already met, or plan to meet, with local cycling groups to discuss their concerns. Cycling UK would like to establish local partnerships with every police force in England and Wales, with a view to furthering the Road Justice goals. Cycling UK members can help achieve this ambition by becoming a Road Justice campaigner and attending campaigner training. For information on campaigner training, visit www.roadjustice.org.uk/campaigner-training-2014.

Cycling UK recognises that the recommendations for the police to set up online road crime reporting systems, and to receive training in the practical and legal issues facing cyclists, are hard for each force to implement without external changes. Cycling UK has therefore been working to ensure measures are in place to assist the implementation of these recommendations. The campaign coordinator is involved in a working group set up by the Metropolitan Police Service to improve the functionality of their online road crime reporting tool in the hope of rolling out this template to other forces. And Cycling UK will this month meet with the College of Policing, the body responsible for developing police training, to discuss how information about cycling can be included in training modules.

A coalition of road safety and cycling organisations (including Cycling UK Scotland, Pedal on Parliament, the Scottish Campaign Against Irresponsible Drivers, Go Bike, Spokes East Lothian, and RoadShare) is furthering the goals of the Road Justice campaign north of the border. Members of the coalition have raised concerns over the leniency shown to bad drivers with both the Crown Office of the Procurator Fiscal (the Scottish prosecution service) and the Scottish justice minister, Kenny McAskill.

The Scottish Government has committed to setting up its own Sentencing Council in 2015. As such, the Road Justice coalition plans to focus on ensuring the Council produces appropriate sentencing guidelines for driving offences. A Road Justice report looking at the Scottish criminal justice system will be published later this year.

This was first published in the June / July 2014 edition of Cycling UK's Cycle magazine. 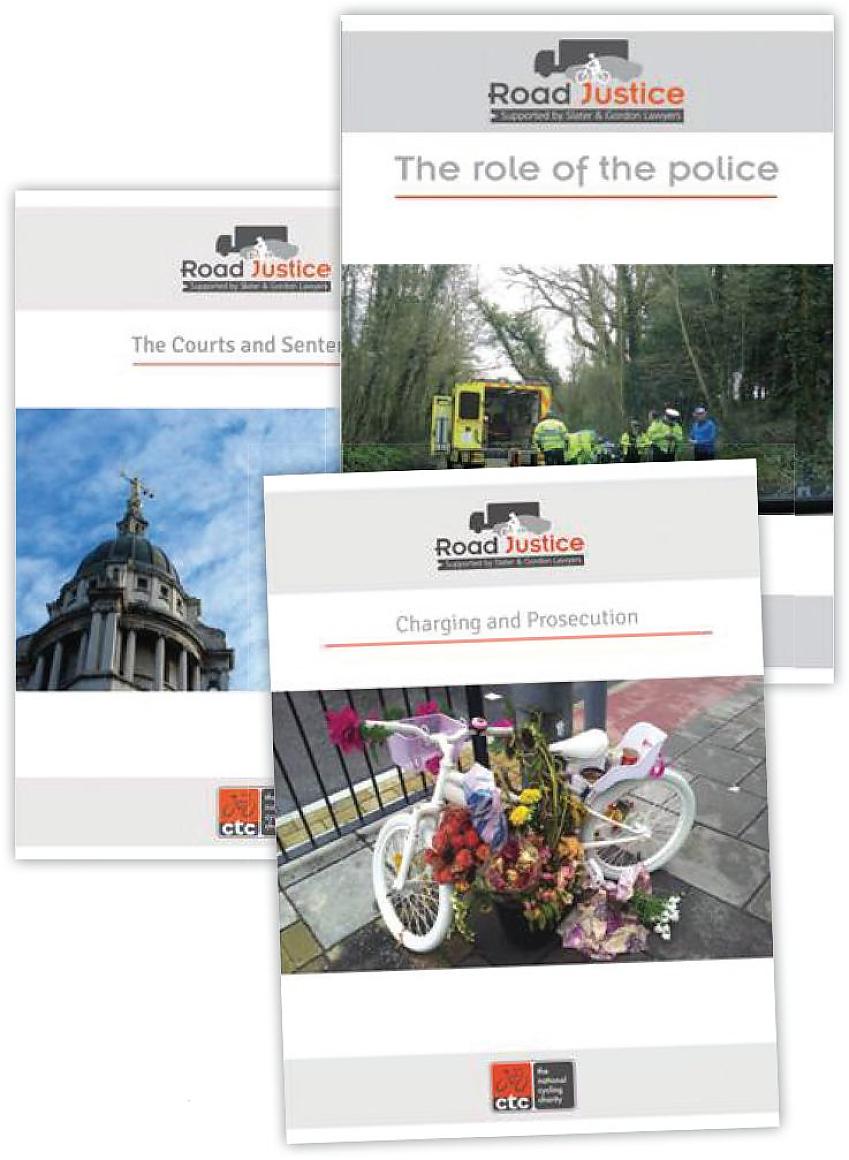