Why the Highway Code should be rewritten?

Why the Highway Code should be rewritten?

Since this article first appeared, Cycling UK has been closely involved with the Department for Transport's (DfT) pre-consultation on a review of the Highway Code.

The DfT has now announced an official, open consultation and we're pleased to say that many of the new rules we've suggested are among the proposals. One of them is to introduce a 'Hierarchy of Users' or ‘Hierarchy of Responsibility’, recognising that road users who pose greater risks to others ought to have a higher level of responsibility.

But, to make these proposals a reality, it's vital that road users of all kinds write to the DfT to show their support. Otherwise, they could be dropped. Please help us make it happen! (Deadline 27 October 2020).

Please read on for our original article.

During World War II, the focus of Alan Turing’s work at Bletchley was on cracking the ‘Enigma’ code, but what would the legendary decipherer have made of our code for road user behaviour?

I often hear people in road safety circles privately express the view that the Highway Code is largely irrelevant or that, with 307 rules plus annexes, it’s just too long; nobody reads it once they’ve passed their test and few people know the rules.

Of course, the rules aren’t irrelevant if your husband was a Rabbi killed crossing the road, only for the driver’s lawyer to quote the rules and blame him for being dressed in black robes rather than reflective clothing. Similarly, the rules matter when you’ve had your leg amputated after a lorry driver who fails to see you turns left and drives over you, only for the driver’s insurers to try to reduce your compensation by claiming you shouldn’t have been cycling to the left of the lorry.

What you were or weren’t wearing, where you were in the road, and the decisions you made as a cyclist or pedestrian are suddenly examined through the prism of a Code that starts with the assertion that the need to be considerate to other road users applies to pedestrians and cyclists just as much as it does to drivers. In other words, that we all share the road and have equal responsibility towards each other.

That’s nonsense. It’s why Cycling UK has been campaigning and lobbying for a review of the Highway Code for so long – because it’s time the Highway Code acknowledged the hierarchy of responsibility different road users have according to the risk they present to others. The suggestion that an elderly lady slowly crossing the road, a visually impaired person, and a child walking or cycling to school somehow have the same responsibility to avoid causing harm to anyone else on the roads as a professional driver of a 44-tonne truck is absurd.

Reviewing the Highway Code was one of Cycling UK’s main calls in our response to the Government’s consultation on cycling and walking safety last year.

In November the Government confirmed it would do this to improve safety for cyclists and pedestrians. Since then, the conversation has broadened to include vulnerable road users generally. But before we debate the minutiae of particular rules, there are some bigger questions to address about how the Code refers to vulnerable road users, what makes them vulnerable, and why.

Are you vulnerable because you choose a particular mode of transport and, if that’s the case, are you then partly to blame? Couldn’t you just dump the bike and jump in a car? Or are you more vulnerable on foot or by bike because you’re more likely to come off worse in the event of a collision, so you’re just more vulnerable to what others may or may not do? 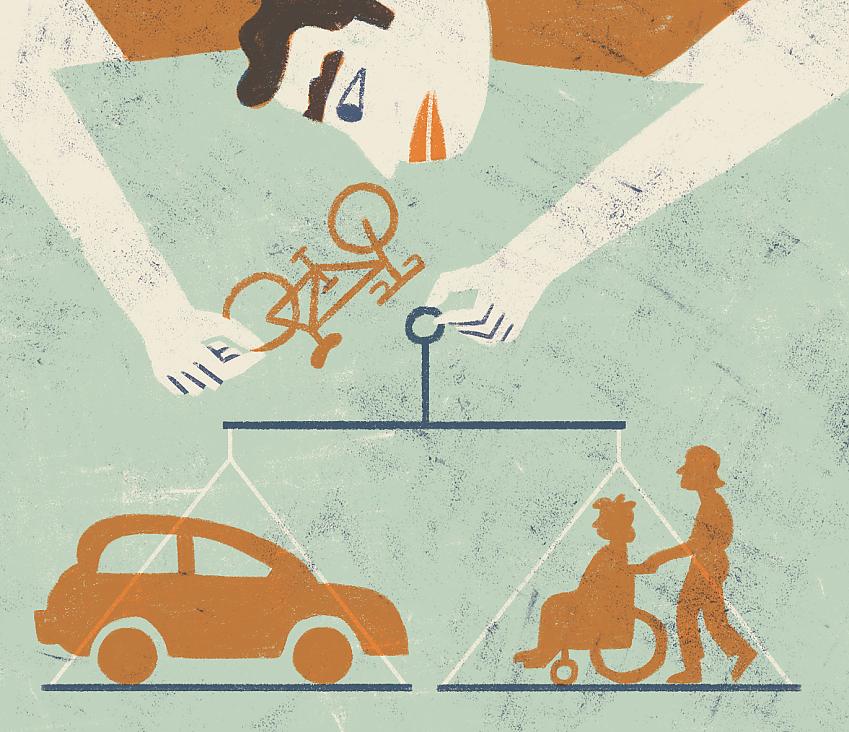 The root of the problem is that too many people have historically looked at road safety by simply looking at casualty statistics, without factoring in the risk that different road users present to each other. That leads to the situation where everyone in the media could tell you the name of the cyclist who caused the death of a pedestrian in 2016, without being able to name any of the drivers involved in the 445 other pedestrian deaths that same year.

Rather than helping to move road safety towards reducing road danger, the Highway Code currently frames road safety in a vacuum where the consequences of discouraging active travel and its public health benefits are ignored.

So Johnny’s mum doesn’t let him walk to school any more and replaces that trip with a car journey, making the road in front of the school even busier during the school run, putting off Sarah’s dad from letting her cycle to school… and on it goes, because we don’t have a culture or a Highway Code that adequately protects the most vulnerable. Rather, it seeks to define their vulnerability by their own travel choice, and then make them equally responsible.

A hierarchy of responsibility

We’re expecting the Government to launch a consultation on the Highway Code shortly. As the Code applies throughout Great Britain, and is usually closely followed by the separate code for Northern Ireland, this is crucially important throughout the UK. What we need is a Highway Code that promotes a road safety culture and that factors in the benefits of active travel, independence, choice, and wider societal and environmental benefits; one that doesn’t strive for balance between all road users but focuses on the greatest causes of danger and risk and on how they’re reduced rather than on personal protection measures.

That’s why Cycling UK has been talking widely with active travel groups, road safety organisations and others, prior to the launch of the consultation. We want to galvanise support for a real change of emphasis within the Code, embedding a ‘hierarchy of responsibility’ so that those who can cause the greatest harm (people in motor vehicles) have the greatest responsibility to reduce the danger they pose to others.

We’ll be pushing for changes to the Code so that it recognises the avowed public policy to promote a healthy, sustainable and effective transport system, and – crucially – seeks to modify the behaviour of those who can cause the most harm. Hopefully this will be a Highway Code that’s less of an enigma, which doesn’t require an Alan Turing to interpret, and which will then be widely marketed and promoted to tackle the “nobody reads it anyway” excuse for doing nothing.

It matters because the way the Code is currently drafted has contributed to a road safety culture where we often hear that “we all need to share the road, and we all have (equal) responsibilities to each other”. This culture risks putting off the most vulnerable from active travel choices rather than protecting them. It results in people saying that it’s too dangerous to travel by a certain mode; that they wouldn’t let their child walk or cycle to school; or that some road users shouldn’t be allowed on this or any road.