Gregory and Izaak at the Cirque de Ladoye in the Jura
By Lauren Purdy
Tuesday, 20 October 2020

Gregory Yeoman and his son Izaak cycled to Switzerland to raise money for WWF.

Saving the biggest challenge for our final day, we turned off the undulating main road in Le Brassus and began the climb towards the Col du Marchairuz. Marked with three chevrons on the map, this climb had been playing on our minds over the previous fortnight as we headed across France towards Switzerland.

A hilly and hot day through Kent at the start had been a test, but the rolling landscape in the Pas-de-Calais and the level track along the Canal de la Marne had not troubled us. Now, however, the ridges of the Jura Mountains rose in front of us…

This was my 12-year-old son Izaak’s idea. He wanted to raise money on a ride for the World Wildlife Fund for Nature (WWF) to help their work on pangolin conservation. His idea grew into a 710-mile journey from the WWF UK office in Woking to their international office in Gland in Switzerland. His last and only tour had been a weekend along the Kennet and Avon canal two years before. 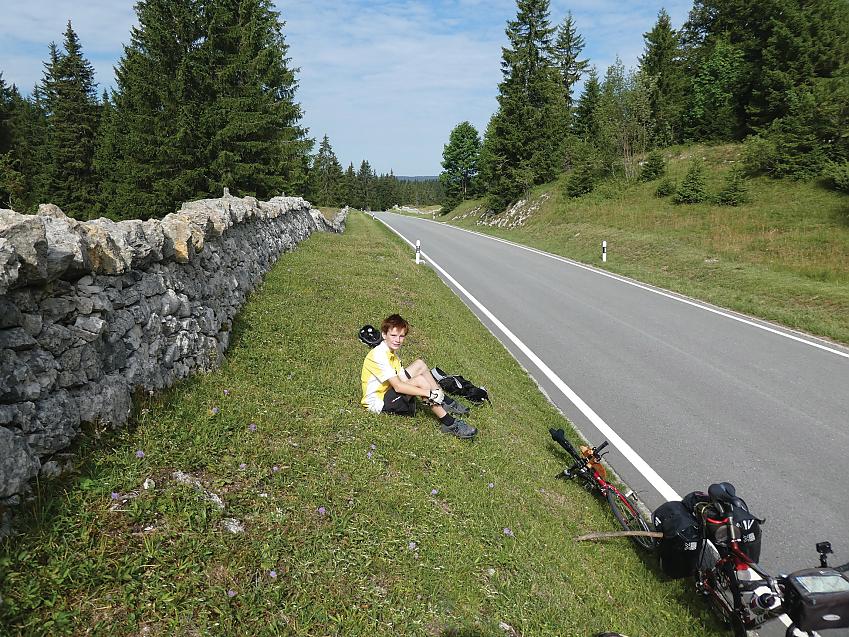 Taking a break at the top of the Col du Marchairuz

Starting up the big climb, I spotted a sign showing the height gain, so I stopped to grab a photo and indicated for Izaak to keep going. As I watched him attack the hill, climbing confidently and pulling away from me around every hairpin, a lump came to my throat.

I need not have had any concerns about his ability to complete the trip. We had averaged 54 miles a day, riding through 42-degree heat as Europe was gripped by a heatwave. Now he was a real grimpeur too!

When I caught up with him at the top, Izaak had a big smile on his face – as we both did on the long descent to Lake Geneva and journey’s end.

How to cycle with your family during the coronavirus crisis View