Cycling UK continues to support the UK to cycle
This remains true during this difficult period with the ongoing threat of coronavirus Covid-19
Read our latest advice on cycling
Château d’Arsac
By CyclingUKvolunteer
Tuesday, 23 April 2019

Bordeaux: the name conjures up visions of grand châteaux and rolling vineyards. The city of Bristol is twinned with Bordeaux, and 11 of us embarked on a tour to Bordeaux, arranged by Bristol CTC’s twin cycle club, Club Independent Bordelais, and our own Jane Chapman.

We stayed in a campsite 15km from the centre of Bordeaux. Our hosts organised rides that took us in every direction, crossing all the main rivers – the Garonne, Gironde and Dordogne. Bordeaux has a stunning waterfront, with the shape of the river likened to a series of crescent moons. It’s used as a symbol for many Bordelaise, including the cycle club.

Hailstones had fallen the day before we started the tour and had damaged many vines, limiting the 2018 vintage. This was particularly noticeable in the Medoc, an area famed for vineyards and lovely châteaux. Some châteaux have English names – Brown & Smith, for example – as they were bought by the English in the 19th century. Another English connection is the Richard the Lionheart lion, which appears in the Aquitaine coat of arms. A surprising landmark was Cubzac les Ponts, where Jacques Cousteau is buried. Quite far from the sea, I thought.

As Bristol is twinned with Bordeaux, we were given a reception at the town hall. It felt strange to go into the Hotel Du Ville in our cycle kit and to be escorted to a magnificent state room. We look forward to welcoming the Bordeaux club in Bristol. 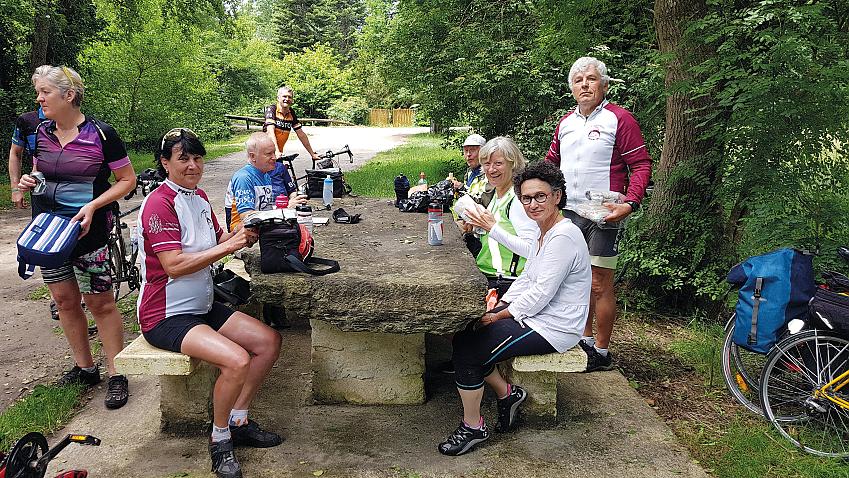