Cycling UK continues to support the UK to cycle
This remains true during this difficult period with the ongoing threat of coronavirus Covid-19
Read our latest advice on cycling
38mm tyres coped okay with the unsurfaced sections
By Tim and Laura Moss
Monday, 25 November 2019

Three months before their son was born, Laura and Tim Moss embarked on a cycle-camping trip up the west coast of Denmark.

Our plan was to cycle through Denmark on the North Sea Cycle Route, which weaves up the west coast of Jutland. We were drawn by the pastries, the 400-odd miles of largely traffic-free cycling on offer, and the flat topography. These factors were particularly important to us on this trip because I was six months pregnant.

I cycled throughout my pregnancy, right up until my due date and beyond. I found it easier than walking, because the weight was off my legs. It was one of the few times I felt almost normal, able to cruise along and forget for a moment that I was carrying around an infant and a couple of pints of amniotic fluid.

I cycled throughout my pregnancy...I found it easier than walking

However, the extra cargo did mean our priorities were somewhat changed when it came to choosing a destination for our annual cycle tour. Finding quiet roads and car-free routes felt more important than normal, as our risk threshold was lowered. Hills are also harder when pregnant: a combination of the extra weight and having to keep two hearts beating rather than one.

All of which drew our attention to Denmark’s west coast. The area is marketed as a child friendly destination. We interpreted that as including children as yet unborn.

Our journey started with a train to London, where we were greeted at King’s Cross by Harry and Megan in cardboard cutout form, celebrating their wedding day. Train staff marked the occasion by handing out tiny Union Jacks, which stayed on our bikes across Denmark.

This was followed by a Eurostar train to Brussels, where our arrival coincided with a gay pride event. We passed an evening roaming the streets, soaking up the vibe and eating waffles.

The next part of the journey was the big one: an overnight bus to Hamburg. We had heard good things about Flixbus and their bike-friendly policies but, as we stood on a dark backstreet at 1am holding tightly to our touring bikes, we began to have our doubts. Sure enough though, the bus turned up when the timetable said it would, the driver strapped our bikes to a rack on the back, and we slept all the way to northern Germany.

On first impressions, Northern Europe was everything we had hoped it would be. The terrain was flat, the banks of the Elbe were bustling, and it was pleasantly warm. The only problem came when evening fell and we realised that everywhere was closed. In northern Germany and Denmark, the Pentecost is a serious business; all the shops and restaurants close for the duration of the Whitsunday holiday.

Once we arrived in Denmark, the route followed the coast. We pedalled amidst sand dunes on a broad, empty trail. On our first night, we headed in search of the campsite marked on our map. Demarcated with huge Danish flags, it was visible from a mile away. As we got closer we realised that it was one of those big, camping-and-caravaning sites, and we braced ourselves for a high Scandinavian price tag.

“Twelve quid for both of us”, Tim said as he strode out of reception, looking relieved. “And that includes showers, wi-fi, a fully-equipped kitchen, and use of the TV room”.

Many aspects of camping when pregnant are little different from normal, but what I was looking forward to least was having to sit on the floor. It may sound like a small thing but even getting up and down could be a pain, so spending an entire evening sitting on the grass, leaning over a camping stove, did not sound like fun.

As such, it was a pleasant surprise to find that every campsite we used in Denmark had some combination of kitchen (so we could cook while standing up), dining area (so we could eat at a table) and lounge (so we could read our books in a comfy chair). They often had shops, some had swimming pools, and all were generally peaceful.

After a relaxing evening, we woke the following morning to sunshine and glorious blue skies. The coastal cycling route wound its way between a dyke, erected to minimise flood risk, and forest trails, teasing us with occasional glimpses of the sea. We passed more cyclists than we did motorists that morning, and even they were few and far between. Most of the time, we had the world to ourselves. In Esbjerg, pausing for an ice-cream break, I asked the shop owner if it was always this hot.

“No. It’s normally more like Scotland, only colder,” he replied. “I can’t remember a summer like this for 20 years. And it’s not even summer!”

It may have been unseasonably warm for May but the proliferation of rooftop solar panels suggested that sunshine was not unprecedented. It is not solar power for which Denmark is best known, however, but wind. We passed many turbines on the west coast. They help produce 30% of the country’s energy requirements and 60% of its electricity. Unfortunately, those spinning turbines only meant one thing for us cyclists: headwinds.

Over the coming days, our route wiggled through grass-covered dunes, passing the many World War II bunkers that still look out to sea. The dunes meant it was less flat than anticipated and patches of sand meant it was often hard going. 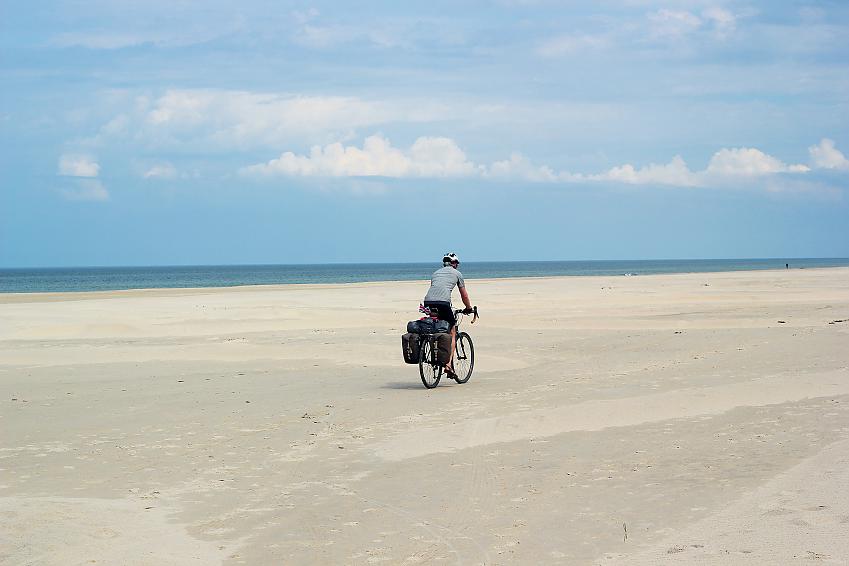 Emerging onto an empty stretch of road late one morning, a couple of grey-haired women shot past, leaving us for dust. We caught them at a café later that day, a glass of white wine in hand as they waited for the batteries of their e-bikes to recharge.

“They’re fantastic. We can pedal the easy bits and use the engine to give us a boost when we need it,” explained one of the ladies, between sips of wine. “The only problem is that mine is stuck on full speed!”

It was not just the older folks that were filling the Danish cycleways. The kids were at it too. From our café table that lunchtime, we saw little children on back seats and balance bikes, and lots of parents using bicycle trailers as their regular prams. Best of all, we found that no one batted an eyelid about me cycling when pregnant. At home, I was constantly asked whether it was safe to ride a bike. In Denmark, no one did.

We waved goodbye to the high-speed grannies, left the café and continued north. The skies remained blue as we rode along the tiny fingers of land that run up the west coast. After a quick ferry hop at Thyborøn, we fought against a headwind into Thy National Park where the first of several snakes shot past my front wheel.

Denmark had a lot more wildlife than I had expected. As well as snakes (probably adders), we saw deer, squirrels, lizards, butterflies, and all manner of birds. Cuckoos were often in earshot of our campsite each night.

We waved goodbye to the high-speed grannies, left the café and continued north

As the name suggests, the North Sea Cycle Route largely follows the coast. How closely it does that varies greatly, but one particular day we spent an entire afternoon cycling along the beach – on the sand, by the sea. We had already had various encounters with sand over the previous week’s riding, and had learned the trick was to stay in a low gear, keep momentum, and avoid any sharp turns. Several miles of beach was still going to be a challenge but once we had accepted that we could only go slowly, it was actually quite liberating.

After a few days of unbroken sunshine and easy riding, we were nearing the end of our route: Skagen, at the top of Denmark. The end of the peninsula is best known as the point at which the North and Baltic Seas collide. The turbulence of this collision, combined with the different densities of the two seas, means that you can see the exact line at which they meet. Supposedly.

We eased our disappointment with a dip in both seas, before collecting our bikes and returning to the town. Skagen is well known for its artists, drawn there by its ‘magical’ light. We were more interested in the plentiful cafés! A couple of days stocking up on pastries fortified us for the long journey home.

As we looked back on Denmark from the train window, we contemplated the fact that, on our next tour, there would be three of us.

Do it yourself: North Sea cycling

Cycling with a bump - is it safe to ride whilst pregnant? View

The Cycle Touring Festival: The perfect place for planning an adventure View