Cycling UK continues to support the UK to cycle
This remains true during this difficult period with the ongoing threat of coronavirus Covid-19
Read our latest advice on cycling
The Adventure Syndicate’s Spring Gathering in the Sierra Nevada
By Jo Gibson
Wednesday, 4 March 2020

Adventure cycling is for everyone, but it's easy to be held back by doubts. Jo Gibson joined eight other women on a bikepacking journey of discovery.

Wheels and pedals and Allen keys were scattered at my feet in the Spanish alley. I set about building my bike for the first time ever, surrounded by new companions doing the same, each of us offering or accepting tentative help. We were in the Sierra Nevada for The Adventure Syndicate’s Spring Gathering.

I’d seen an advert for it while browsing my phone on holiday. The picture was of four women riding into the mountains. The text read: “We will gather together a group of women who have some experience of travelling long distances by bike (i.e. are capable of riding for a full day) and inspire, encourage, and enable them to ride out fully self-supported to sleep for one or two nights in the Sierra Nevada mountains.” 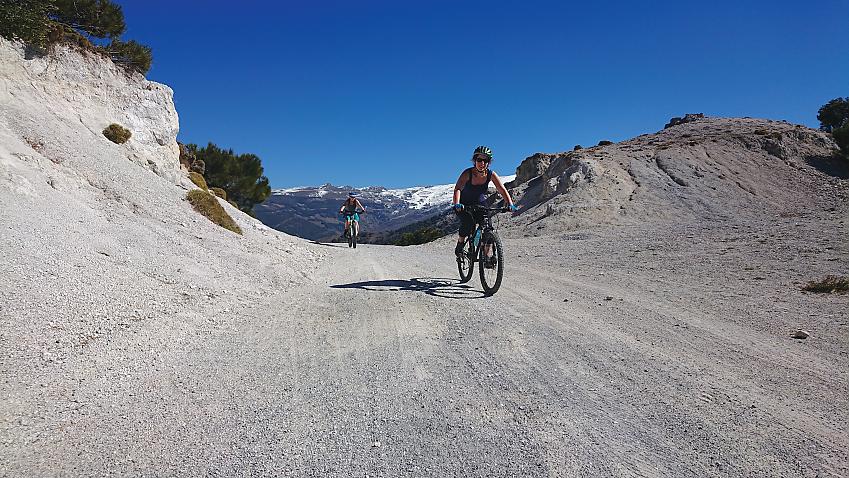 The first evening, bikes all built up, we were sitting around a long table, replete with Alice’s tomato risotto. Adventure Syndicate Director Lee Craigie handed out paper squares and pens. Would we write down our hopes and fears for the week? Chairs scraped as, one by one, we stuck our apprehensions onto the refrigerator.

As she looked around wide-eyed, I wondered how many of us would be here in Janet’s position. Encouragement and support were shared around the table and the laughter steadily resumed.

Next morning, we climbed to the village of Güéjar Sierra as a group, stretching out down the 8km climb. After coffee we split up. Kate, Lee, and I headed further up the hill to find a rocky singletrack descent while the others clocked up road miles. 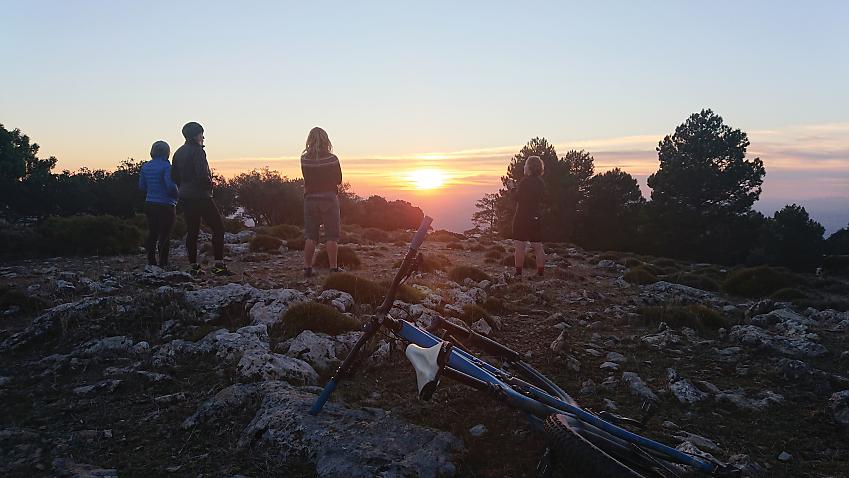 Jenny Graham – Adventure Syndicate Director, unsupported round-the-world record holder, and one of Cycling UK’s 100 Women in Cycling – joined us on day two. I watched her disappear towards the Sierra Nevada National Park and told myself: “It’s a mind shift. That’s why you’re here. All you have to do is pedal.”

But as I looked out over Monachil, having found height easily on the intricate backstreets that line the hillside, I knew I could not deal with it. It was not mechanical trouble, map reading, or fatigue: I was simply terrified of being alone.

I could have gone with Kate, Fiona, and Sarah but this solo ride – into the mountains to find a gravel track that looped back above the rugged singletrack of day one – was my choice. To me, the gathering was a place to push boundaries. 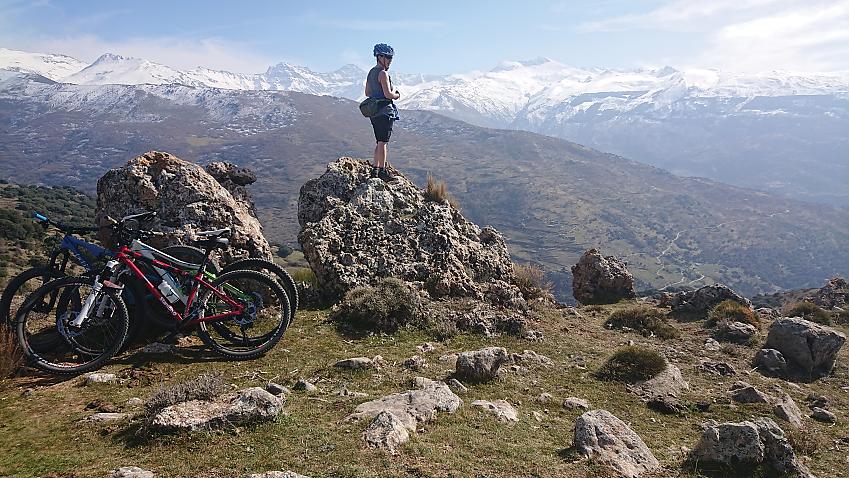 If there are such things as good climbs, the 20km drag up to Tocón is one of them. I meandered along past juicy cacti and velvet blossom. I was on the right track; Wahoo said so and Komoot agreed. But my breathing came rapidly, my chest felt drum-skin taut. I looked at the jagged rock walls that were drawing up around me the higher I climbed.

In Tocón, the only thing missing was tumbleweed. The bar was shuttered, the streets deserted: a dead-end place. There was only the gravel track that led me anonymously into the hills, taking me deeper into nothing. “This is beautiful,” I told myself as I stopped to take in a green valley scored and patchworked with terraces. It was; I just couldn’t feel it.

“I’m in bits,” I told her, unable to manufacture the enthusiasm she would have had. “The ride was great, it’s just there are other things going on. It’s not the ride…” I paused, took a chance: “It’s a terror of abandonment. A childhood thing.” 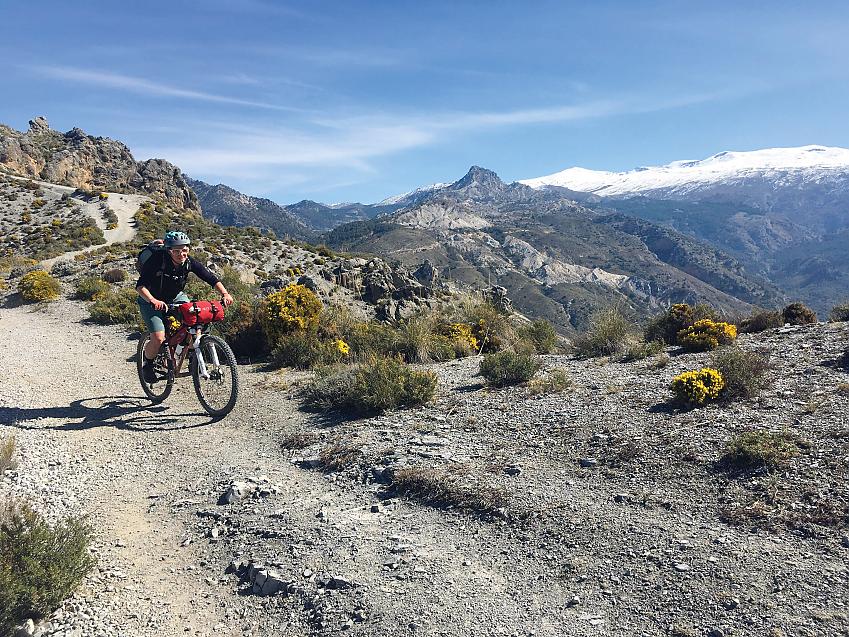 Burdened with sleeping bags, mats, warm clothes, food and stoves, Kate, Fiona, Sarah, and I climbed easily up the road to Purche, striking a gloriously slow contrast to the road race that had flown through only days earlier. We stopped to examine the olives hanging in the trees and devour Janet’s scones and wraps. We were climbing into the National Park to find a place to sleep for the night. There was no rush: we simply had to be there by dark.

Beyond Purche we were swallowed on a tongue of gravel that delved ever deeper into the rock canyons. Normally I hate climbing but my legs found a steady rhythm. I was thinking: if I could pedal into the Spanish countryside alone, as I had the day before, I could do that at home too. And if I could do that, what else could I do?

That evening, when we were all gathered on the hillside, we watched the sunset over the city, heated up couscous, cheese, vegetables, and hot chocolate over tiny stoves, and huddled against the creeping cold. This was Janet’s first ever time camping – and she was doing it without canvas, beneath a sky torn by shooting stars. 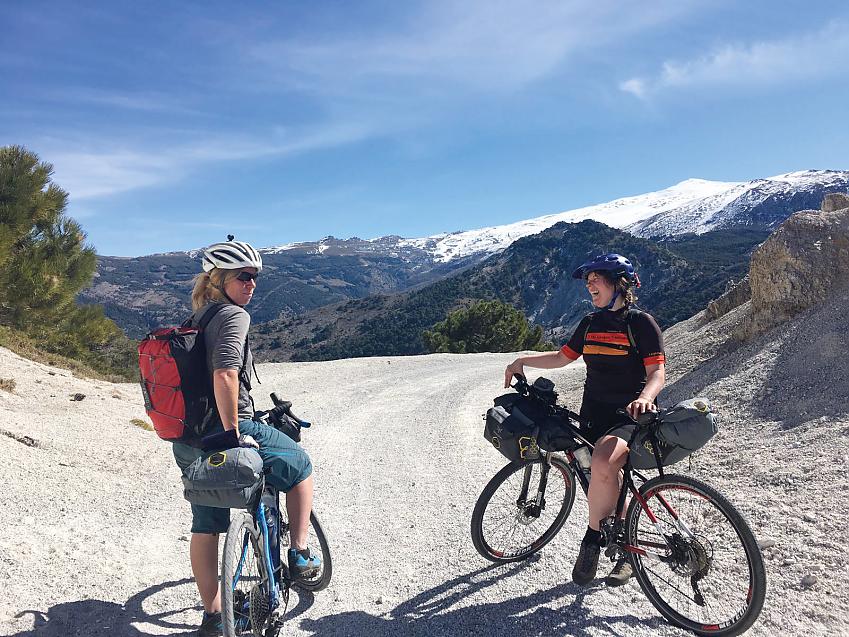 Two months later, rain blowing from the east, I was pushing my bike up a hillside, 90 miles into the 148-mile Capital Trail, a bikepacking route out of Edinburgh. Fast riders do it in well under 40 hours. I just wanted to know if I could finish it. On that hillside in the rain, I didn’t think so. But all I had to do was keep going…

Back home, my ride complete, I found myself heartened each day watching the progress of Janet’s training for the North Coast 500 on Facebook, and following on Strava the bothy trips Kate was making. Holding on to a new belief that my own story might be worth telling, I was beginning to feel part of a bigger tale.

As I draft this piece, I am checking dotwatcher.cc. Jenny Graham is battling the Highland 550, the toughest of the UK bikepacking routes to attempt against the clock. She has fought horrific weather conditions and is now in the ‘great wilderness’. Her dot has moved little in the last ten hours. I hold my breath and wait for the stories she will have to tell.

Discover more about The Adventure Syndicate at theadventuresyndicate.com

Are you up for Cycling UK's 2020 bikepacking challenge? View