With an electric-assist semi-recumbent German tandem, Cycling UK member Kate Whitaker explains how she is able to enjoy fantastic days out with her daughter, Harriet.

"The reason I’ve got this trike is because Harriet isn’t able to cycle on her own. She has a severe learning disability and epilepsy, which isn’t fully controlled. But she enjoys cycling, especially the social side of going to tea shops for cake. And I wanted to keep cycling, so I was going to find a way to take her with me.

“Previously we had an electric-assist Hase Pino but I was having difficulty starting and stopping safely; Harriet’s 17 now and almost as big as me. I decided we needed something similar to the Pino but with two wheels at the front. I found one using Google: the Urban Fahrradbau Strada All Terrain, a German trike I came across on the website of a Madrid special needs bike shop.

“I don’t speak Spanish or German so I contacted Get Cycling in York, because I’d already been to see them to try some of their other cycles. They knew of the company and they’d been trying to get in touch with them about being an agent. So they imported it for me. I bought the non-electric assist version because Get Cycling said they could retrofit the BionX system from the Pino.”

“Where Harriet sits on the trike, I can speak to her and keep an eye out for any problems. At first, I was worried that she might put her hands in the spokes or disc brakes. She doesn’t have the understanding not to do that. So Get Cycling fabricated some wheel covers. I also have some straps that are used for people in wheelchairs who fling their arms about without control. With those, Harriet can move her hands up and across her body but can’t reach the wheels. 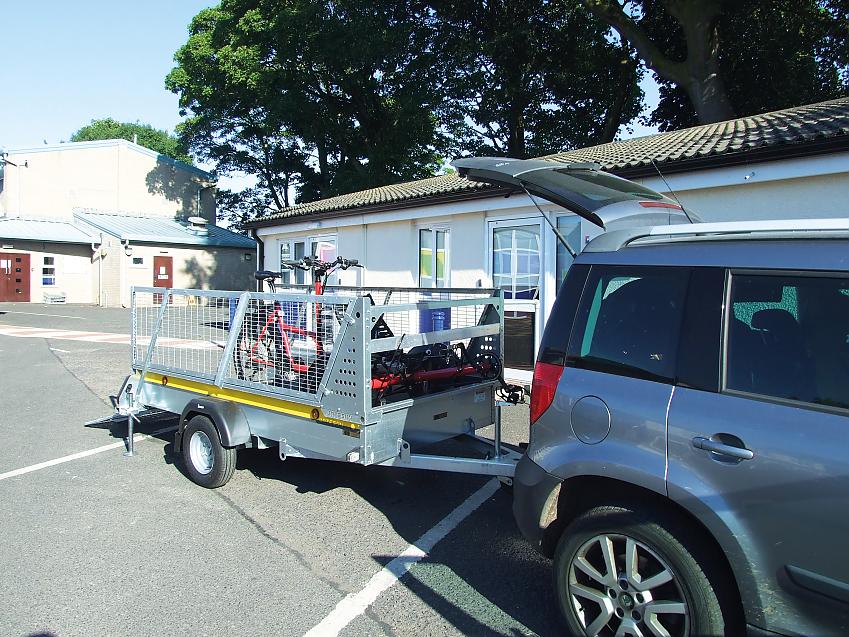 “The trike has a separate freewheel for Harriet so she can pedal or not. She’s quite capable of pedalling but usually chooses not to or pedals furiously backwards – which is exercise but not particularly useful! I’ve been trying out a clutch mechanism that allows me to make her pedal. It’s designed to slip if she resists too much. The idea was to get her pedalling more but I just end up pushing her legs around.

“The best thing about the trike, now Harriet’s a lot bigger and her balance isn’t brilliant, is that if we get into an awkward situation we can just stop. We’re not going to fall over – her weight’s contained within the triangle of the wheels. It’s a lot safer. It would be nice if it was lighter; it’s 40ish kilos. Being permitted to have better e-bike power packs and motors in the UK would help too.

“We ride monthly with Fylde Bicycle Belles. I joined years ago when Harriet was small and came with me in a trailer. The Belles have been brilliant. The group was set up to encourage women who didn’t ride much to get out cycling, so they always wait for the slowest in the group. We have all day to go to one or two tea shops and cover up to 25-35 miles. It’s a social event as much as anything. Last summer, we did Blackpool ‘Ride the Lights’, which was brilliant. Harriet spent her time waving her arms around and laughing her head off.”