Lynda and Patrick Walsh travelled from the United States to south west France by plane and train, with their tandem in two suitcases.

Jean stood on a gravelled rooftop in Lectoure and pointed to his bicycle, a rusted mixte propped against one of the stubby stone walls that were the only things preventing cars from driving onto roofs in this precipitous town. He pointed first to the bicycle and then to his paunch. ‘I bike to stay in shape,’ he said with a wink and a smoker’s smile. Jean was a metalworker, out for a joyride on a Sunday afternoon. He said on a clear day you could see to the Pyrenees from this spot on the south-west rampart of his medieval-walled hometown. When he heard we had ridden to Lectoure on a tandem from Mont-de-Marsan, he did the same thing everybody in Gascony did – said ‘Oof!’ and made an undulating hand gesture.

Our elevation profile for the past three days had resembled a saw blade: two kilometresup, two kilometres down, two kilometres up… not steep slopes but not trivial either. After a long day of this, we were stretching our legs with a stroll around Lectoure when we ended up on the same rooftop as Jean. He said he wished his wife would ride with him. He recommended we stop in Saint-Puy for the melons. Then he went back to searching for the Pyrenees across a moody, late-afternoon landscape of wheat fields, vineyards, and oak copses, and we went on our way. 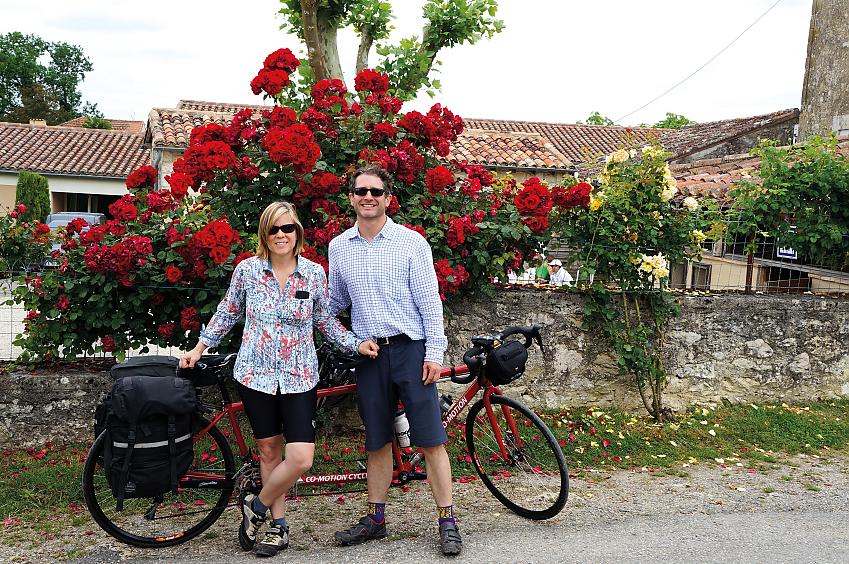 Lynda and Patrick Walsh in Larressingle, not far from Condom

We were riding a 350-kilometre, six-day loop through Gascony. In Paris, we’d felt like tourists, drifting through the city on foot but not engaged with it. Here in the south-west of France, the tandem put us in touch with the countryside. We felt the temperature drop in each oak hollow, heard geese honk as they pecked and scratched in grassy fields. We learned to smell the blackberry patches before we saw them, and the rain before it fell. We started noticing the faint shell motifs etched on pillars and posts that had led pilgrims from all over Europe for a thousand years toward the shrine of Santiago de Compostela. We marvelled at the range of local machinations for warding birds off the abundant cherry crop – scarecrows, CD-ROMs, bags of eggshells, even the dangling corpses of dead birds.

The topography of the area is like an egg carton - hills every way you turn.

In Paris, we felt invisible. In Gascony, it was different. Chickens and dogs craned their sleepy necks as we pedalled by. If we stopped to route-check in front of a Romanesque church or a saffron-stuccoed house for more than five minutes, someone invariably popped out to ask us if we were all right, if we needed something to eat, if we knew the wind was due to pick up that afternoon… And when we said where we were planning to stay that night, further on down the road, then came that sympathetic ‘oof!’ and the undulating hand.

Our goal for the bike-tour portion of our trip was freewheeling: to ride through Gascony while sampling its twin gastronomic trophies – armagnac (cognac’s southern, spicy cousin) and foie gras. While the topography of the area is like an egg carton – hills no matter which way you turn – we aimed to dodge the serious business of the Pyrenean foothills by trending roughly west-to-east and back.

To start, we took the train from Paris to Mont-de-Marsan and assembled our Co-Motion Primera at the train station, stashing the two cases and the rest of our unneeded luggage at the Hôtel Richelieu, where we were planning to return. We then followed the level, gorgeously paved voie verte out of town for almost 20 miles through beech forests – until the path dissolved first to gravel and then, after a few more miles, to mud, thanks to the recent floods. 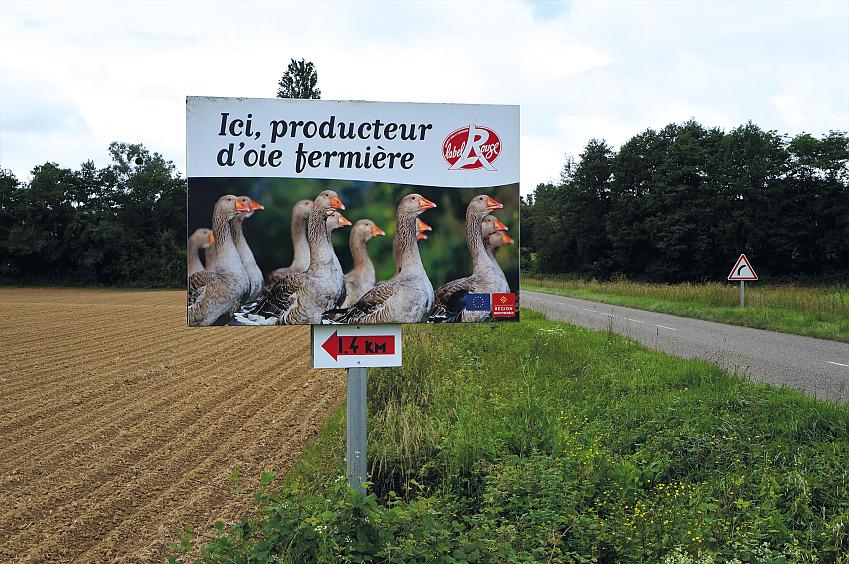 Foie gras is a Gascon speciality

Lacking knobbly tires and loaded a bit too heavily for sloppy terrain, we left the voie verte at Arthez d’Armagnac, at a terracotta church poised at the end of a fig tree-lined path. From there, we followed paved country roads to Barbotan-les-Thermes, which offers a surprising array of accommodation for its size, due to its renowned hot springs. Well appointed and open to the public, the springsare set in a picturesque garden framed by palm trees, lotus ponds, and a fragment of an old Templar fortress.

We enjoyed the comforts of Barbotan so much we stayed on an extra night, fitting in a day loop to Éauze that took us to two armagnac distilleries, both excellent. At Domaine de Pujo, the doyenne shared her dim view of the labour strikes up north, labelling them ‘the shame of France’ and vowing such a thing would never happen in Gascony. Her counterpart at Domaine du Tariquet plied us with glasses of both armagnac and floc (a delicious regional fortified wine), all the while keeping an eye on her giggling granddaughters, who were being led around the manicured château grounds on horseback by their Uncle Remy.

Then it was on towards Lectoure. The road there led us through a series of stunning Medieval villages – all perched on hilltops to the benefit of their defences and the detriment of our legs. But fortified with a travel flask of armagnac procured from a garage distiller in Montréal (who asked us with a twinkle in his eye what we thought of our presidential choices for 2016), we soldiered on to Larressingle.

On a footprint smaller than a Walmart, Larressingle bundled a 13th-century château, a museum, an excellent little shop offering wares by local artisans, a café serving fresh strawberry milkshakes, and an apartment for sale in the fortress walls (for a buyer who wouldn’t mind parking outside the moat). 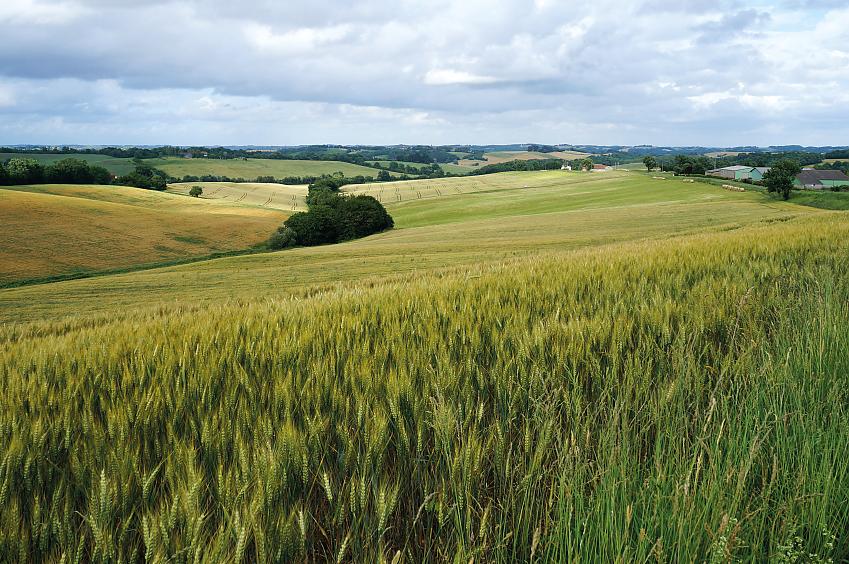 If the church in Larressingle impressed with its sober antiquity, the airy Gothic arches and jewel-like windows of the cathedral in Condom dropped our jaws to the marble floor. Pronounced ‘cone dome’ and completely uninvolved in the prophylactic business, this pretty burg on the banks of the Baïse nevertheless boasts a life-size bronze of Gascony’s legendary four musketeers (don’t forget D’Artagnan!).

A few more hours of chugging climbs and swift descents brought us to Lectoure and a wistful perspective north over the medieval city walls from our room at the Hôtel de Bastard.

After our chat with Jean, a swim in the hotel pool, and a good night’s rest, we woke to church bells and a delicious spread downstairs of Brebis cheese, acacia honey, local ham, and bread. Then we pedalled our way back west and south into the Ténarèze zone of armagnac production, sandwiched between the two larger regions of Bas- and Haut- Armagnac. We also rode into the rain for the first time on our tour, but it failed to dampen our spirits.

We gaped through the mists at a 50-foot cedar outside the mottled stone walls of Terraube. We stopped to dry off at the Abbaye de Flaran, a medieval Benedictine abbey of voluminous space and spare decor. Here we met with a surprising private collection of Dalí sculptures and a tiny, precious Monet; and, welearned that our loop had accidentally traced two of the alternate routes for the Santiago de Compostela pilgrimage.

In the days that followed, we began to recognise modern pilgrims, afoot or on horseback, and we pondered the thousands more who had gone before us over a thousand years, as fleeting as we were on these roads. Yet in our passing, all of us had strengthened the socio-economic web that keeps these beautiful abbeys and villages and traditions alive.

Those traditions grew more noticeably Spanish as we dipped southwest toward the Pyrenees. Lupiac, the birthplace of D’Artagnan, offered a plaza complete with overflowing bougainvillea arbors and arched portals. After a breathtaking sunset ridge ride, we rolled into Aignan, the site of annual bull fights. There we stayed in a gîte run by a Dutch couple who had been lured to Gascony by its reputation for longevity and good living.

As we rode on to the south west the next day, advertisements for pétanque tournaments abounded, and a bakery in Aire-sur-l’Adour set out Moorish pine-nut pastries. It felt we had crossed into another world.

In Termes-d’Armagac, we stopped at a farm that produced both foie gras and craft beer and downed both on a bench in the farmer’s garden. Then we climbed out of the Adourriver valley onto a plateau patchworked with fields and elm forests. That night promised the big splurge of our tour – a stay at Eugénieles- Bains, the sylvan haven of Napoleon III’s second empress. We slept in a converted convent and still dream about the triple decked cheese cart and the warm, white-clay bath at the spa. It’s hard to say which felt more welcome after five hilly days.

A short ride on our sixth day brought us full circle to Mont-de-Marsan, where conference attendees chuckled as we broke down our tandem back into its cases in the Hôtel Richelieu lobby. Then we were tourists again. We boarded our train for Paris. Back in the capital, we blinked out of the windows of our cab at paint-bomb rainbows and scrawled slogans from the labour demonstrations we had missed by a day: "Death to the bourgeois!", "Down with Hollande!", "We stand united!"

For the next two days, before we flew back to the States, we drifted past store windows and through museums full of things we could not touch. We filled our bellies with delicious meals. We walked the cool, damp corridors of the Catacombs and read chiselled lines by the poet Lamartine that seemed eerily apt: ‘And so we ourselves pass, Alas! Without leaving a trace…’

Still, here is what stays with us: the heady scent of jasmine on the voie verte; the croissant and strawberries we split between us waiting out the rain in Saint-Puy; the little terrier who begged for a treat and then stole Patrick’s glove at the crossroads to Lartigue. And perhaps some small part of us has lingered behind in Gascony as well. Maybe Jean is saying to his wife: we should get a tandem – I think you’d like it.

Do it yourself: getting to Gascony 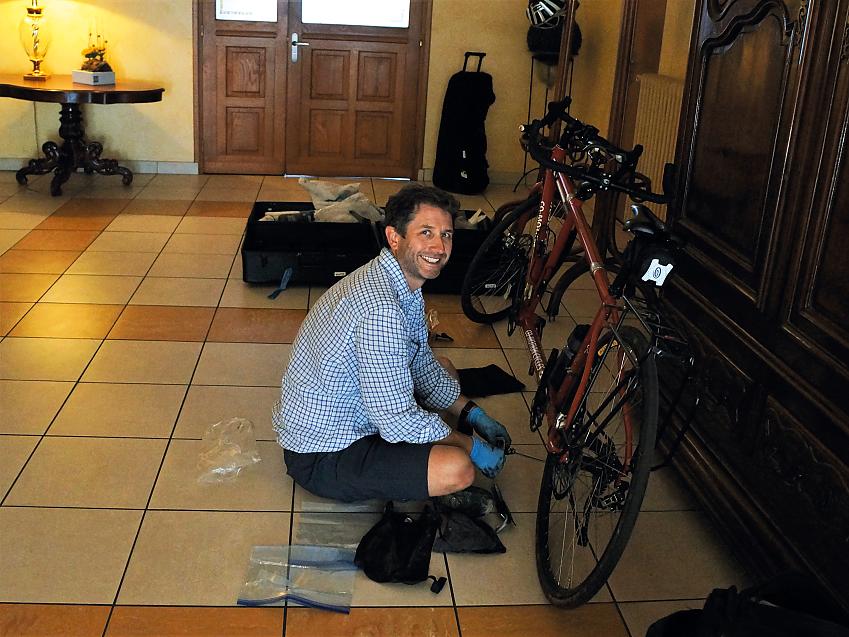 We flew into Paris and took trains to Mont-de-Marsan, our starting point in Gascony. Most TGV trains have compartments that accept assembled bicycles, and the spaces can be reserved online. Many of the regional RER trains carry bikes as well, though this is first-come, first served. Assembled tandems are not carried on any train but folding or coupled bikes in standard-size cases are treated as luggage. We had no difficulty getting hotels at the beginning and end of our tour to store our bike cases while we rode. We tipped the staff.

ROUTE: An elliptical route east-west through Armagnac country, from Mont-de-Marsan out to Lectoure and back, roughly tracking two Santiago de Compostela pilgrimage routes. We had overnights in Barbotan-les-Thermes (with a day loop to Éauze), Lectoure, Aignan, and Eugénie-les-Bains.

CONDITIONS: Mostly cool and cloudy, unusual for June; some dirt sections of the voie verte were unrideable due to rain.

MAPS/GUIDES: To choose destinations, we used the photos and descriptions on france-voyage.com. To navigate, we used Google Maps and the GPS on our smartphones.

I’M GLAD I HAD… a little French. Gascony is not heavily visited by Anglophone tourists.

NEXT TIME I WOULD… pack more snacks. Businesses in Gascony close for lunch between noon and two,and cafés are only open then (and restaurants not before dinner, which usually starts at 7). We advise loading up on bread, cheese, pâté, fruit, and chocolate to avoid having to choke down an energy bar in this amazing gastronomic region of France.

Great Rides: The Black Forest with an electric bike View