Cycling UK continues to support the UK to cycle
This remains true during this difficult period with the ongoing threat of coronavirus Covid-19
Read our latest advice on cycling
By ZebraZebra
Wednesday, 3 October 2018

Cycling UK member Natalie Wilson rode 5,000 miles around the coast of Britain to raise awareness Ehlers-Danlos Syndrome, a genetic disorder that she has.

On the road by 6am, I was soon confronted by a thick wall of fog. The view over the River Towy in Carmarthenshire was hidden. It was bitterly cold. Although the first hour of 20% plus gradients had warmed me, I was left shivering when the route flattened out. A petrol station was a welcome sight. With my fingers too numb and useless, the attendant gave me a hot chocolate from the machine and offered some biscuits.

Back on my ICE trike, the route I’d planned followed a tributary deeper into the freezing fog. Luckily, I didn’t have to wait long for another hill. I was soon working hard. It was almost a month since I’d set off from Wokingham, but I still wasn’t used to the extra weight of the luggage.

As I continued to Wisemans Bridge, a hamlet on the Pembrokeshire coast, the sun came out at last. I stopped and stood for a while to take a photo and listen to the crashing of the waves. My morale was then boosted by a couple of ladies who had arranged to cheer me on from the roadside as I climbed another steep hill en route to Tenby. I descended cobbled streets lined with rows of multi-coloured houses to arrive at the town’s harbour.

During the preceding days, I had been lucky that others (strangers who became friends) had joined me for sections of my route. A tough morning by myself had given me time to think. They were not new thoughts but had been whirring around my head all day nonetheless. Taking an hour out for lunch gave me time to jot them down. 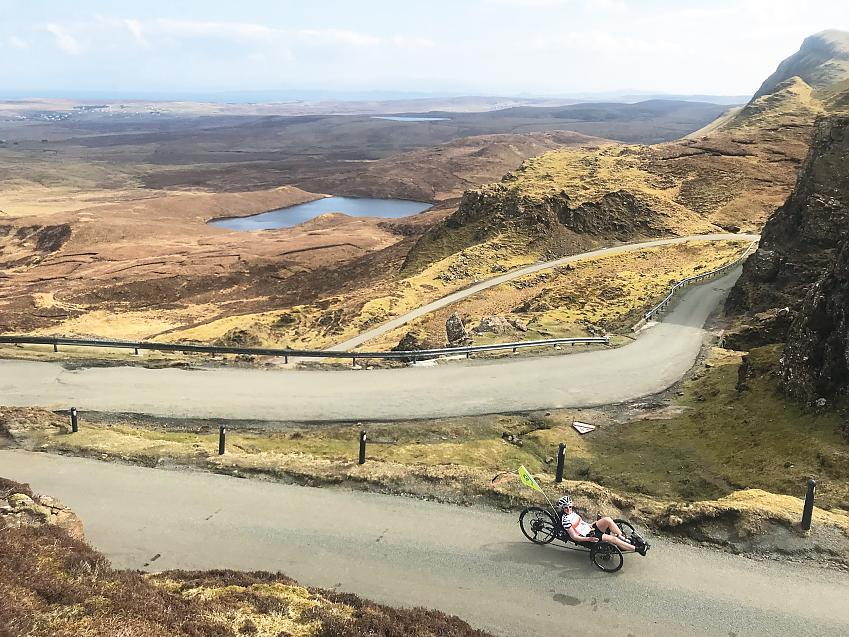 Natalie cresting the Quiraing on the Isle of Skye

"This challenge is really tough. My body hurts and my leg muscles burn more than they have ever done before. I have battled the snow, ice, wind and rain brought by The Beast from the East. I spend the majority of the time cold, unless I am cycling up a steep gradient or standing in front of a hand-dryer in public toilets.

"I am tired from spending so much time outdoors, because the miles are progressing slower than I expected. I have been getting up at 5am every day to have enough time to plan, blog, and contact the local radio and TV, update social media, and liaise with everyone who wants to join me. On top of this, I have to make sure I am looking after myself: taking my 30 tablets a day; drying my kit; washing; and fixing any punctures or mechanical problems with my trike.

"Today I realised that, as painful as all of this is, IT IS NOTHING compared to the pain I endured before and at the beginning of my diagnosis of Ehlers-Danlos Syndrome (EDS), a genetic connective tissue disorder that affects many systems of the body at once. It’s nothing compared to the constant ‘8 out of 10’ on the pain-scale headache I had for three years after brain surgery; the frequent joint dislocations from as little as rolling over in bed; the difficulty I had remaining upright; the constant chronic fatigue; the problems digesting food; the embarrassment of not being able to get to the toilet on time; and the reoccurring, life threatening anaphylaxis.

"On top of all of this, and perhaps the worst aspect, was the frustration: not being believed; failing to achieve; hearing family and friends question why this had happened to me. It’s only a snapshot of what others with chronic illnesses go through every day.

The pain climbing these relentless hills is easy compared to what I have had to endure in the past. When I show my positivity, my genuine smiles and my brave face, it doesn’t mean I’m not hurting inside, but that I know that it is possible to hurt more.

"The pain climbing these relentless hills is easy compared to what I have had to endure in the past. When I show my positivity, my genuine smiles and my brave face, it doesn’t mean I’m not hurting inside, but that I know that it is possible to hurt more."

Companions along the coast

Although these thoughts sound depressing, they acted as a healthy reminder of why I had taken on the challenge: to raise awareness of EDS and similar conditions; for others to have a smoother path to diagnosis; to promote disability cycling; and to show that cycling clubs can be inclusive. I wanted to prove that my imperfect body is still able to cycle out into the countryside – to show others what is possible.

When I purchased my trike, I was still in a permanent neck brace. My husband was washing my hair for me. He had to lift me on and off the trike every time I went out. I started with five-mile journeys. The more I cycled, the stronger my body became.

As I continued the challenge over the next couple of months, it was these thoughts that kept me going. I spoke at schools, rode with cycling clubs, local groups, others with EDS, others on trikes, and individuals who’d heard about my story on the news. Every day I received a multitude of messages. Although self-supported, I was far from lonely, making hundreds of new friends along the way, all with their own inspiring stories. Local communities rallied around to help in the bad weather, and often local hotels and family-run guest houses didn’t charge me to stay. The kindness I encountered was incredible.

As I headed further north, the weather warmed slightly. I was travelling at about the same rate as spring, the daffodils opening at each location on my arrival. The scenery became more barren, more mountainous, more beautiful. The colours of the sea kept changing, as did the weather and rock type. I spent most nights in my tent, falling asleep to the sighing of the wind and waking to the sound of birds.

I saw golden eagles in Galloway, sea eagles on Mull. I spotted red stags, red squirrels, and seals. I climbed a hill in Harlech in Wales that topped out at 40%. I rode over the Bealach na Ba, an Alpinestyle ascent in North West Scotland; no one warned me of the 25% gradients on the coast road that followed!

My best night’s sleep was camping near the village of Evie on Orkney. I’d acted as a tourist, cycling around the island with another tricyclist, who left to get the ferry to Rousay. I found a space just big enough for my tent next to the wall of a small ruin, sheltering me from the 30mph winds. Dinner was rice and vegetables, cooked in my JetBoil, accompanied by an Orkney Ale gifted by a local shop. I dined in front of untouched white sand and a view of the isle of Rousay.

I started my journey at the end of February to avoid the traffic on the narrow coastal roads. I wanted to meet the local communities without the deluge of seasonal tourists. I’d cycled through the last few winters and had spent months planning routes and kit, researching and organising. I wasn’t prepared for the snow, but I managed it and continued on.

I was still on the road in May, when I had to face the other extreme – the start of the summer heatwave! My white panda eyes shone so brightly when I took off my glasses that they became a frequent topic of conversation. Finally I reached Brighton, where I’d begun my coastal journey.

On my way home the next day, it was amazing to see that members of my local cycling club had turned out to cycle the last miles with me. When my husband and I moved to Wokingham three years ago, Wokingham Cycling Club (a Cycling UK affiliated group) took us under their wing despite the fact we turned up on our Hase Pino semi-recumbent tandem. We weren’t judged for being different. We could spend time cycling with others. 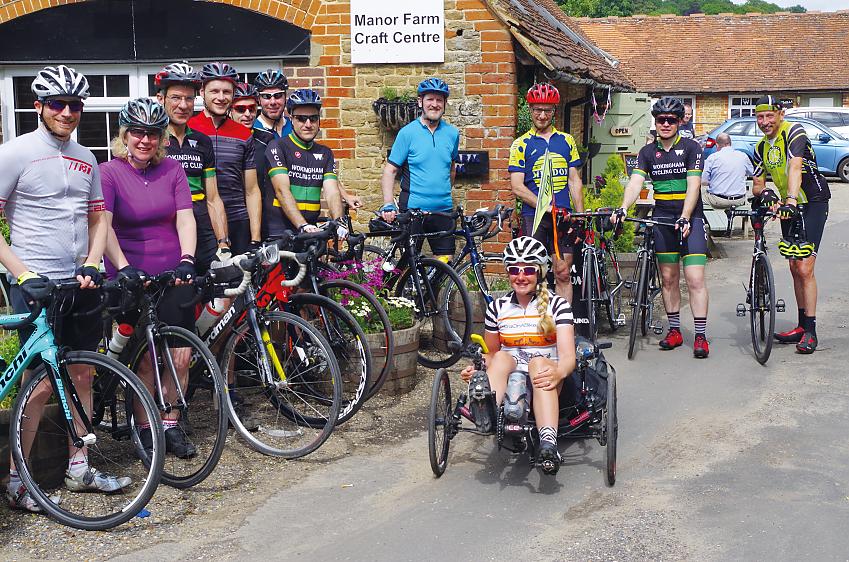 This led to the introduction of slightly slower rides, which I often lead on my trike. These rides have made our club even more inclusive and increased our female membership. It really does show that it is possible for a disabled cyclist on a trike to still be part of a club environment, and for that I am truly grateful. Wokingham Cycling Club has without a doubt changed and enhanced my life, and I couldn’t be more grateful to each and every member.

Completing my challenge has given me an immense sense of pride. Riding my trike has given me the opportunity to meet new friends, to explore, to discover, and to love life again. I have returned with a newfound self-belief and with even more drive to help inspire others. 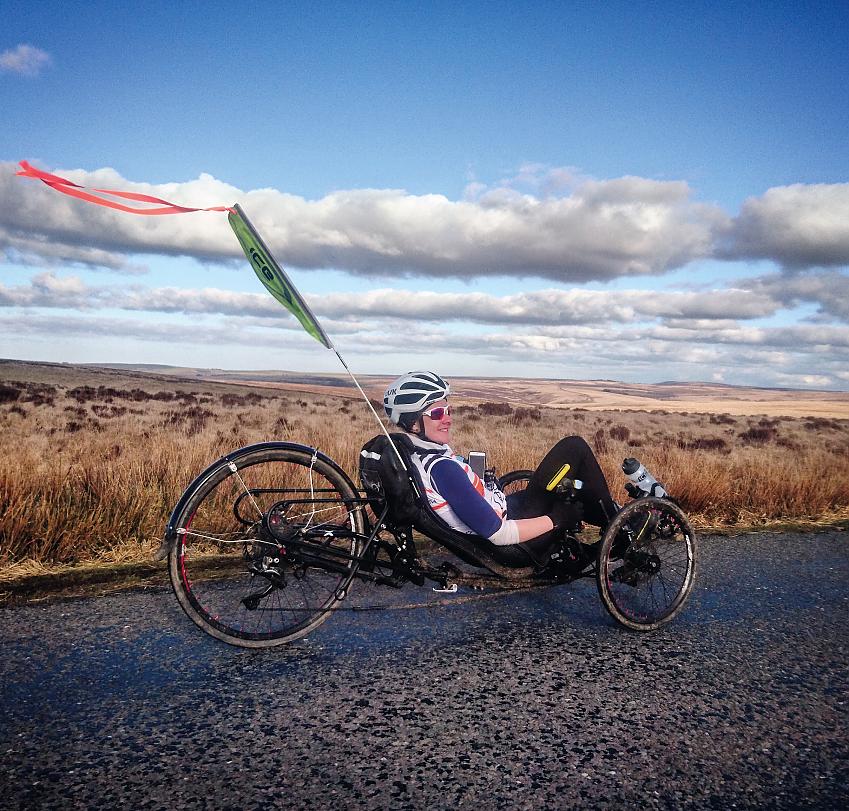 Cycling UK is working to make cycling accessible to all. Edinburgh All-ability Bike Centre (ABC) was set up in 2015 as a collaboration between Cycling UK and FABB Scotland’s Blazing Saddles, with funding from Transport Scotland and support from City of Edinburgh Council’s Outdoor Education Team at Bangholm Outdoor Centre. (It’s now part funded by RS MacDonald Charitable Trust, along with Transport Scotland.) The project has enabled hundreds of riders of all ages, abilities and backgrounds to get cycling. As well as standard solo bikes, there is a range of adaptive bikes, trikes, tandems, handcycles, side-by-sides, and wheelchair transporters. They’re ideal for people with physical disabilities, learning difficulties, autism spectrum conditions, age-related issues, and neurological conditions. For more about Edinburgh ABC, contact Cycling UK Development Officer David Glover, david.glover@ cyclinguk.org.

Natalie's website Zebra on a bike  (the zebra is the symbol for Ehlers-Danlos), ehlers-danlos.org

Natalie Wilson is one of the keynote speakers at Cycling UK's Big Bike Celebration in Harrogate on Saturday 6 October. Tickets are free.

Natalie's advice for touring with a chronic illness

Use the bike and the kit you will be taking as much as possible, and work out any adaptations to make using them easier to save energy where you can.

Contingency plans are important. Reach out to people and make contacts along your route in case you need help. Plan as much as possible before you leave but be flexible in case you need an impromptu rest day. Don’t be scared to ask others for help.

I carried a tent because I knew that if I got too tired, I could pitch it on the side of the road and rest. Set yourself a challenge and achieve it – the rewards are great.

Fact file for the Coast of Great Britain

Route: I cycled clockwise, on roads closest to the coast. I started at my home in Wokingham, cycled to the coast in Brighton, and finished in Wokingham 98 days later. This included some ferry trips. I also cycled around some of the Scottish islands.

Conditions: I had every element thrown at me. The coldest temperatureI cycled in was –8°C during The Beast from The East, which brought ice, wind,rain and snow; my technology didn’t work in these temperatures. As the journey progressed, I was hit by the beginning of a heatwave in May.

I'm glad I had: Lots of inner tubes and lots of messages of support.

Next time I would: Do exactly the same again to meet all of the kind people I made friends with on the way.Maybe I’d start a month later!