Great Rides: Family holiday over land and sea to Finland

Louise and the children at Europoort on arrival from Hull. Photo by Jeremy Clines.
By Jeremy and Louise Clines
Thursday, 17 October 2019

Great Rides: Family holiday over land and sea to Finland

Cycling UK members Louise and Jeremy Clines took their two children, four bikes, and a trailer and travelled over land and sea to Finland. This is how they did it.

Not owning a car, we spend every summer holiday with some configuration of bikes, trailers, trains, and ferries. We’ve written about this for Cycle before, most recently in 2016 – see cyclinguk.org/cycle/aboard-family-cyclingholiday-train. But could we get as far as Finland that way, getting all our gear on and off trains and ferries? We – Louise, Jeremy (mum and dad), Esther (8) and Nathaniel (6) – decided to try.

We had considered flying or becoming ferry foot-passengers with suitcases. However, we love cycling, and bikes are the only way we can comfortably carry family camping gear. It’s great to have bikes for day trips as well.

The biggest decision of the trip was made: to go over land and sea from the UK to Finland on a five week cycling and camping adventure. With four months to go, we began our research. A cascade of ferry, rail and campsite bookings soon followed. 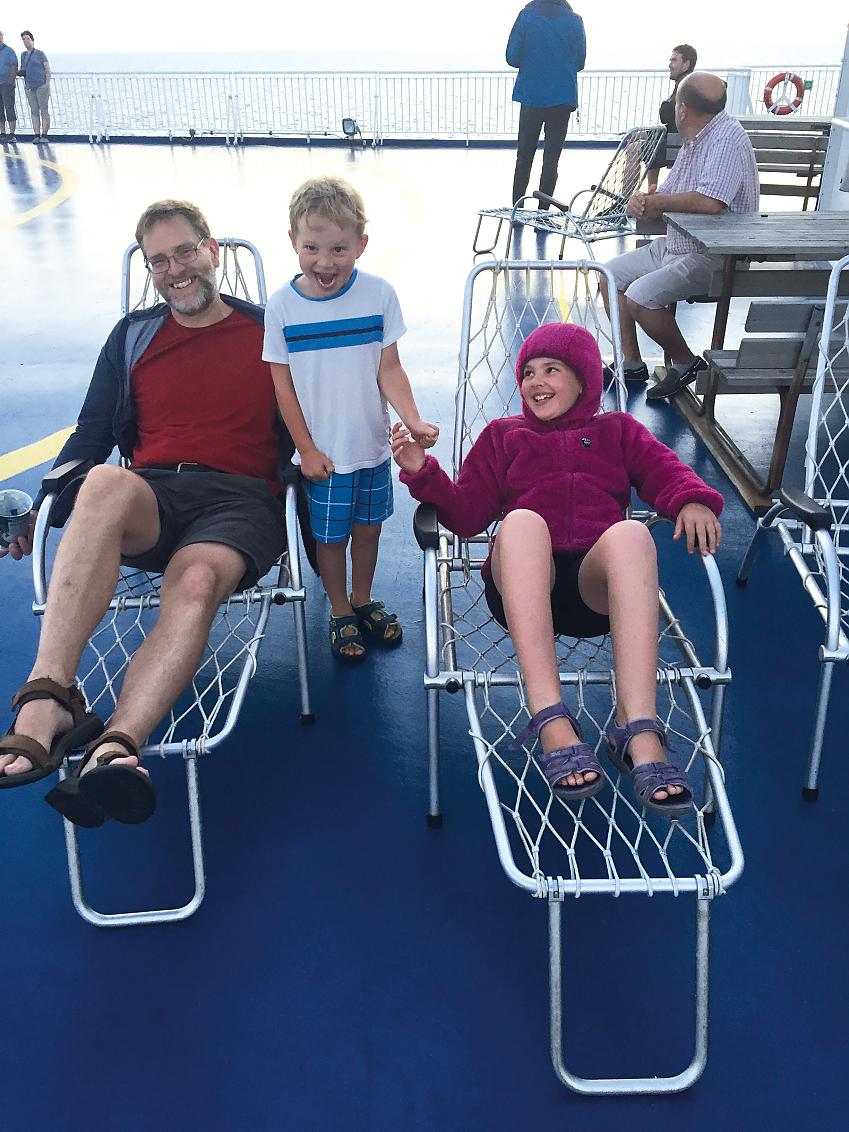 Across the North Sea

We breezed along the mostly traffic-free route from Hull train station onto the P&O ferry to Rotterdam. After a restful night’s sleep in a comfortable cabin, we used 8km of cycle tracks, followed by the passenger ferry from Pistoolhaven, to get us across from Europoort to Hoek Van Holland. We left the port on the fabulous coastal traffic-free cycle route towards Den Haag. Our six-year-old sprinted ahead. He and his bike, complete with rear panniers and handlebar bag, won smiles and thumbs-up from cycle tourers coming the other way.

After camping overnight, we set off on our biggest travel day. This involved getting ourselves, our bikes, twelve panniers, a 90-litre trailer bag, and a folding trailer on and off four trains from Den Haag in the Netherlands to Lübeck in Germany.

Louise was anxious. We arrived at the first station super early to relieve the tension. Our 10km bike ride to Den Haag station had taken just over an hour, without the imagined punctures, accidents, arguments and route-finding mishaps. We took an earlier train than necessary too, in order to be in plenty of time for our booked train at Amersfoort. Fellow cyclists were friendly, swapping stories and helping us board with our loaded bikes.

The next two trains (Amersfoort to Osnabrück and Osnabrück to Hamburg) were both fast, long distance trains that required cycle reservations. These German trains (the first was the international Amsterdam-Berlin service) were incredible. There was space for 18 bicycles, each with its own numbered slot. It was a delight for a family who often try to squeeze four bikes into the inadequate spaces on British trains. 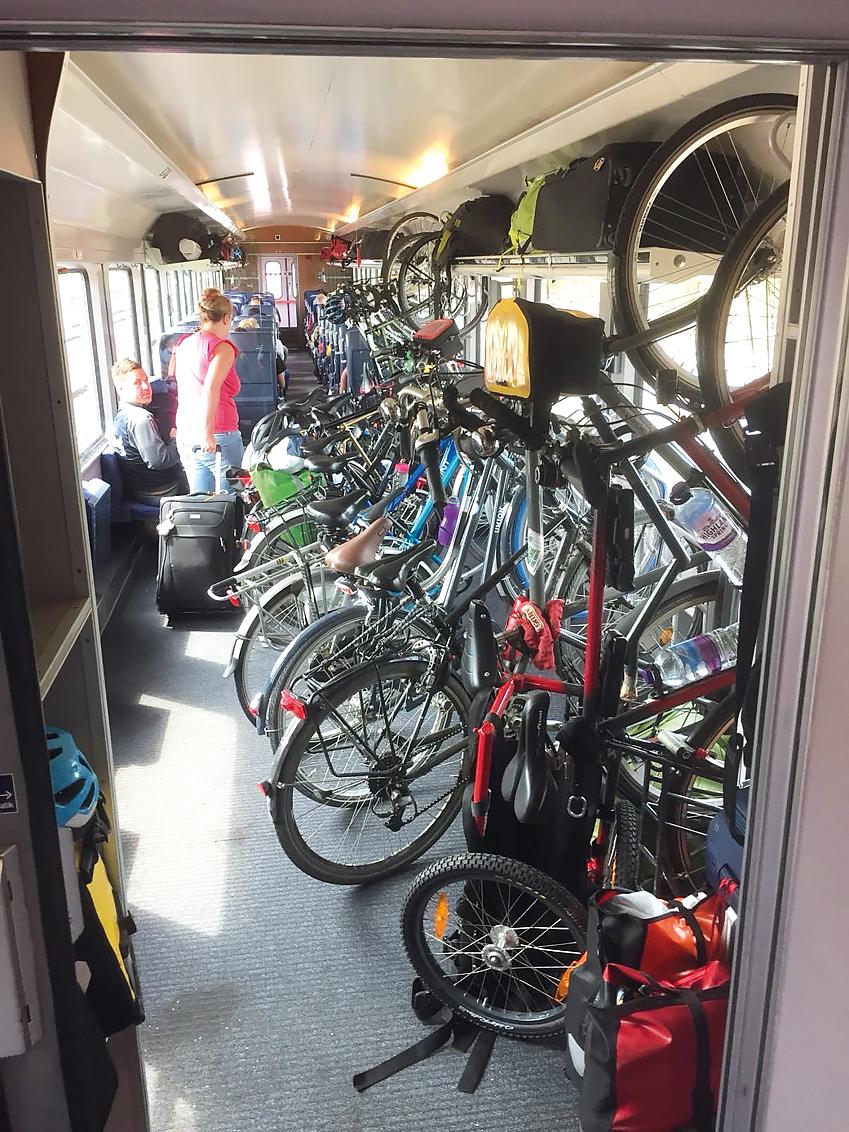 Finally, after our fourth train, a local service, we arrived in the beautiful medieval town of Lübeck, where we set up camp just as the sun had set. We spent the next couple of days exploring Lübeck by bicycle. Though the provision for bicycles is not of Dutch standard, the combination of traffic-free paths and quiet roads meant we felt safer than in many places in the UK. Only occasionally did a bike path abruptly stop.

In Lübeck, we enjoyed cycling along the river, past the Holsten Gate built in 1478, the seven churches, dating from the 13th century, and the Hospital of the Holy Spirit, built in 1230. The old town is an island surrounded by the River Trave.

We pedalled to the station for a day out in Hamburg, the highlight of which was a trip to Miniatur Wunderland (including many cyclists in miniature, not just trains). The metro-card for travel by bus, train, and boat gave us a low-cost river trip.

Another great Lübeck day was spent in and on the water in the summer sun. We discovered a fantastic fresh-water swimming spot, accessed by cycling through parkland and along the river. What a pleasure to move from the 28°C air temperature to 22°C water! The children were excited to see a diving platform to swim out to, a tubular slide to whizz down, as well as paddle-board and kayak options. There was a grassy sunbathing area, a small sandy beach, and a café.

After four days, it was time to say goodbye to Germany and head to Finland. The heat hadn’t abated so we shortened our next planned cycling day by hopping on the boat that headed, in relaxed fashion, downstream from Lübeck to the port of Travemünde. The afternoon was given to cycling out to the Baltic coast beach and playing in the lively surf, oblivious to the beach charges we noticed on our return.

Cycling onto a huge ferry is always exciting, even in daylight. We boarded the Finn Maiden in the dark, in mandatory hi-viz vests, wearing head torches. The late hour and the convoy vehicle that wove a path across the dockyard full of lorries to lead us onto the ship all added to the sense of adventure.

Seeing the lunar eclipse from the middle of the Baltic Sea was a real highlight of the crossing. The 30-hour journey seemed to fly by with cabin picnics, games of Uno, and frequent visits to the jacuzzi and sauna – almost obligatory for a Finnish boat.

Cycling off the ferry just to the east of Helsinki was easy. We breathed in the clean air and immediately joined a well laid-out traffic-free lane separate from the main road. Enticing-looking cycle routes branched off into the trees, promising future adventures. The signage wasn’t as good as that in the Netherlands, but using online mapping on a smartphone we found our way to our campsite.

One of our favourite days out by bicycle while we were in Finland was to the island of Vuohensaari, about 5km outside the town of Salo. The cycle paths in Salo are wide and flat. We felt the children were safe speeding ahead of us. What struck us in Finland was how empty, clean and well-maintained it was everywhere we went, including the cycle paths. It was a pleasure to ride along in the sun, breathing in the scent of pine, enjoying the still air.

We cycled over the road bridge to the island into thicker pines which led to a sandy beach, where we parked our bikes and had a dip. Jeremy went to find a coffee and Louise and the children were surprised to see him arriving back at the beach by rowing boat. We all jumped in for a paddle.

Another highlight of Finnish life was the ubiquitous sauna. A Finnish friend showed us the way to secluded sea coves and peaceful lakeside locations. These outdoor swimming havens always had a public sauna. The Finns inside were friendly and curious to hear about our travels, quizzing us in excellent English. We all became expert in the repeated ritual of sweating it out in the sauna and then plunging into the cold water outside.

A 10pm arrival back into the German port of Travemünde meant a quick whizz on our bikes from the ferry to the nearest campsite, where we erected our tepee in the dark. Having already cycled this journey in daylight in the opposite direction, we found our way easily and knew to expect bike paths and quiet roads. The only flaw in the plan was that the wire to Louise’s dynamo had snapped.

Next day, we explored Travemünde by bicycle. There’s a bike-and-people ferry that transports you over to a quieter section of sandy beach. We loved the off-road paths through the woods, which offered much needed shade. Then it was back to Den Haag by a series of trains, and the ferry back to Hull from Rotterdam.

There are quicker ways to travel to Finland and back, and cheaper ones too, but we’ve no regrets about our trip. It was a low-carbon journey that had a sense of adventure about it, with plenty of interesting places along with way. The children got to cycle in all sorts of conditions. The freedom we allowed them changed depending on where we were riding. On quiet roads we cycled two abreast, with a grown-up on the outside. On long traffic-free sections in Finland and the Netherlands, we let them speed ahead and enjoy being in the lead. They knew to stop at a road or at a junction, where they could help decide which way to go next.

Read more about this trip and the Clines’ other cycling adventures on their blog eco family travel.

Route: Ferry from Hull to Rotterdam. Cycle ride to Den Haag. Trains from Den Haag to Lübeck. Ferry from Travemünde to Helsinki.

Travel: A bit stressful at times, with a lot of kit to keep track of, but it worked! The riding was hot but fabulous.

We’re glad we had… A Nigor WickiUp 6 tent. It’s lightweight, so offset all the Lego and novels we took.

Next time we would… Be less anxious about the train travel.

Do it yourself: Family trip to Finland

We booked our ferries directly with P&O (Hull to Rotterdam) and with Finnlines (Travemünde to Helsinki).

Deutsche Bahn’s helpful UK phoneline (08718 808066) enabled us to buy our tickets and reserve our bikes on the train from Den Haag to Lübeck. We reserved tickets and bicycle spaces from Helsinki to Salo direct with VR, the Finnish rail company. Their website www. vr.fi was extremely user-friendly.

All aboard: a family cycling holiday by train View

Cycle Magazine, February / March 2019 View
Cycling UK continues to support the UK to cycle
This remains true during this difficult period with the ongoing threat of coronavirus Covid-19
Read our latest advice on cycling