Interrailing isn’t just for gap-year students. Clive Parker used a European travel pass and a Brompton for a whistle-stop tour of France and Italy before the pandemic.

Outside a café in the village of Santa Flavia in Sicily, I was polishing off a lemon ice cream when a man whizzed by on a Brompton. I quickly chased after him as, apart from mine, I hadn’t seen another Brompton in the whole country. The Italian man sang the praises of his practical folding bike, his only regret being how hard they were to buy in Italy.

I had gone to Santa Flavia on the local train from Palermo so I could enjoy an exhilarating cycle ride along the rocky coast. Palermo is an ideal base for exploring Sicily, with beaches and mountain roads a short spin from the centre. It soon became one of my favourite Italian cities, brimming with history and bustling street cafés and restaurants. Grilled fish, pizza, Sicilian wines – I was in heaven. 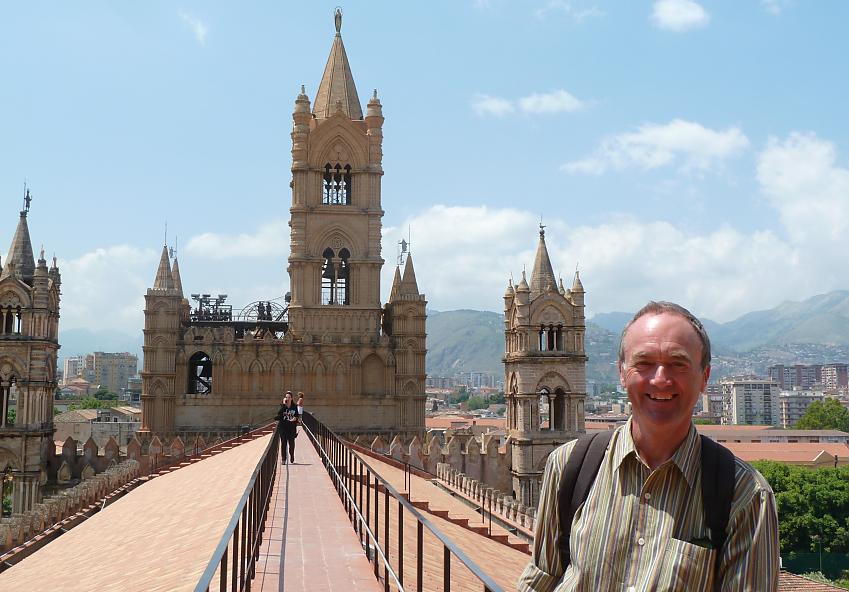 I was in heaven. Then I tried to fix a rear wheel puncture in my hotel room. With black gunge all over my hands, I belatedly realised the towels, bedcover, and curtains were all pristine white. What to do?

The helpful girl on reception rescued me from embarrassment with a handful of old rags she magicked from nowhere. Puncture fixed, I cycled off to visit Palermo’s wonderful 12th century Palatine Chapel to chill out.

I’d come here by train and would need to head back home to Glasgow before my Interrail ticket expired. That journey would take a few days, but there was no hurry. An essence of Interrail travel is that the journey is part of the holiday. Having said that, rail travel can be surprisingly quick when you’re used to flying.

People in Glasgow don’t believe me when I say you can reach the south of France in a day by train. Glasgow-London-Paris-Montpellier: three trains, plus quick jumps between stations in the capital cities, which is easy with a bike.

I spent a few days in France on my way to Italy, detouring slightly to Perpignan to see friends. I discovered you could go anywhere by bus in Department 66 (Pyrénées-Orientales) for a flat fare of €1. My folding bike was no problem. The French were amazed by it.

I took the bus to Le Boulou for a ride up into the Albères Mountains, which form the border with Spain. Cycling back to the bus stop, local ladies watched me efficiently fold up my Brompton, culminating in a cheery “Voila!” when completed. “Qué pratique!” (How practical!) one of them said. Yes, the Brompton is a wonder of British engineering, adding flexibility and variety to a holiday by train. 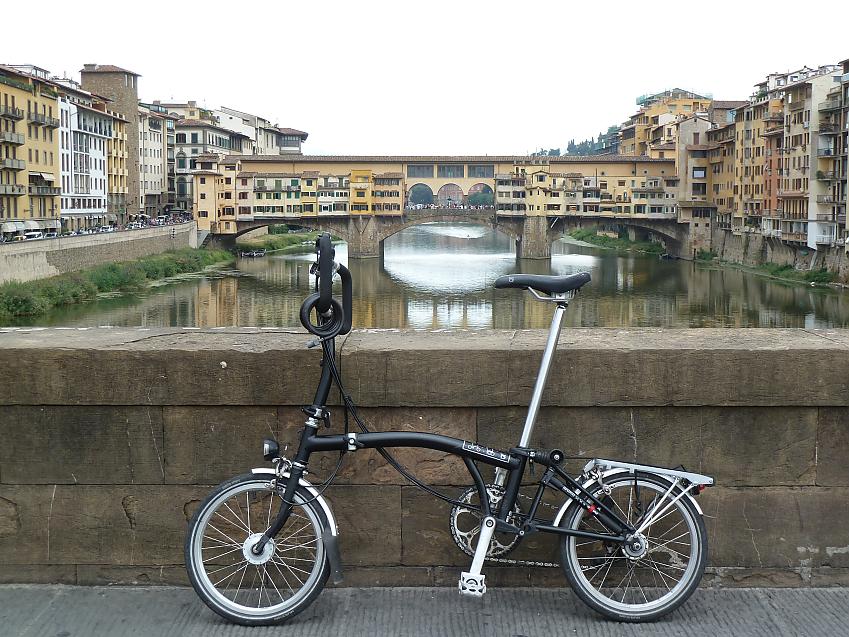 From the south of France, I headed around the coast into Italy, visiting a friend in Turin. His flat was a stone’s throw from the station. It was easy to find but he hadn’t told me about the nightclubs along the street, which kept me awake half the night. Another friend, living near Florence, has a house in the mountains above that city. He agreed to pick me up at the station in his small Fiat.

I hadn’t mentioned the bike. When he saw me wheeling it along the platform, his jaw dropped. But moments later it was folded compactly and sitting in the back of the little car.

We chugged up the hills to his house, chatting away as I tried to memorise the route back into the city. I’d have time to myself over the next few days while Francesco was out at work. Zipping up and down the local roads into the city, out into the hills, and to the local supermarket for supplies, the feeling of freedom was great. 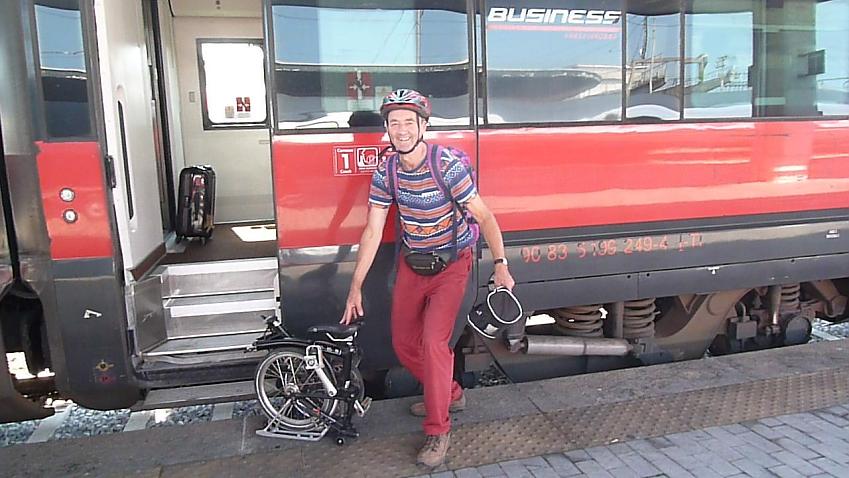 Naples is a stunning city but its traffic has a terrible reputation. Guidebooks mentioned the dodgy nature of hotels near the station so I sought accommodation near the beach and port area, about 15 minutes away by Brompton.

I launched myself into the traffic nervously. At a roundabout, a local man cycled alongside me. Sensing my fear, he said: “Don’t worry about the traffic; it’s too slow to hurt you!” He was right.

On my bike it took only 20 minutes to check out a number of hotels – much easier than visiting them on foot. Before long I had checked into a comfortable and inexpensive one a block behind the beach. The narrow winding streets of Naples are adorable, likewise the basilicas and the endless views of the sea this hilly city provides. 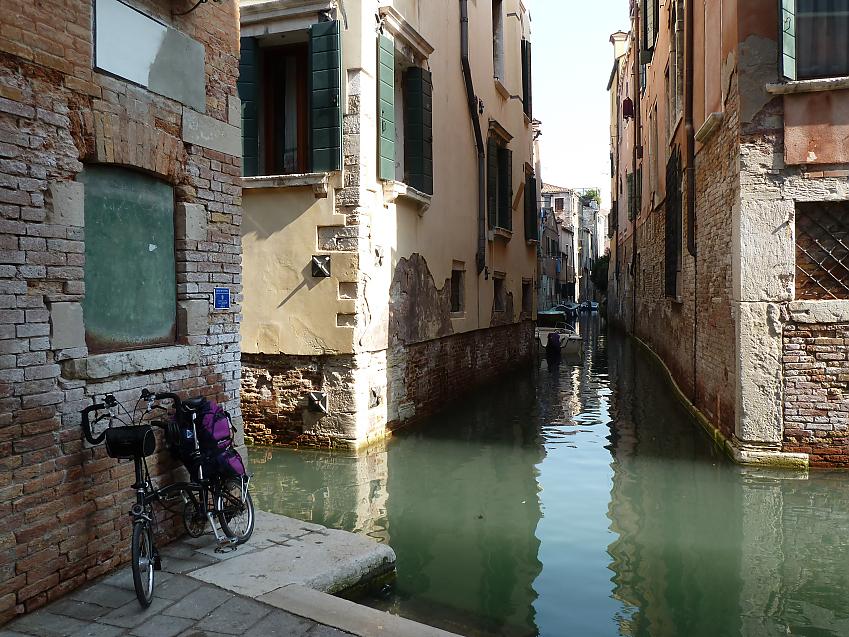 A ferry goes from Naples to Ischia. Like Capri, this island is popular with Italians so there was a lot of traffic. Fortunately a minor road and track go along the coast to the Aragonese Castle, which sits on a rocky outcrop connected by a low causeway. It was built in 474BC to protect the coast from enemy shipping.

A rail-connected ferry took me from Piombino to Elba. Napoleon’s exile house in Portoferraio is now a museum. Not a bad place to live in exile, I thought. I cycled up to Volterraio Castle, high up amongst the ravens at 394 metres above sea level. The view was outstanding, as was the freewheel back down. 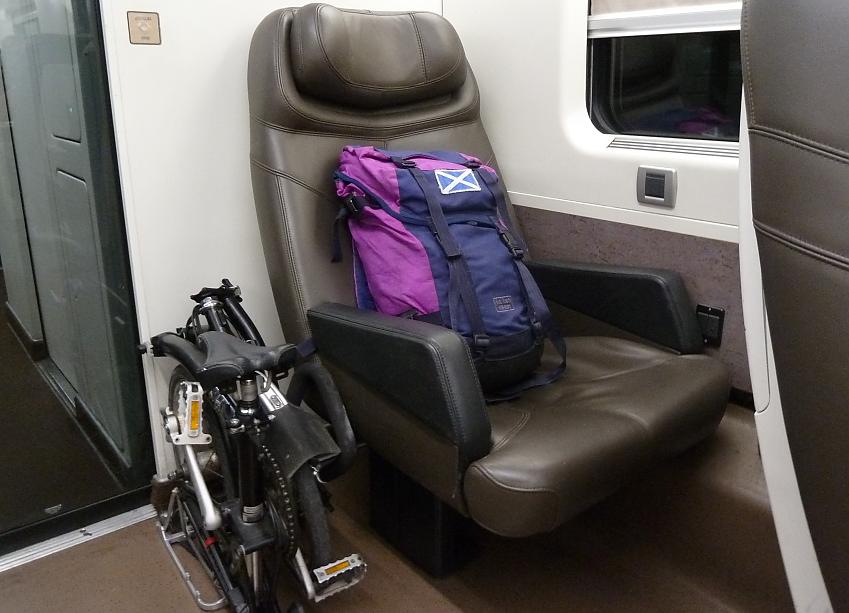 The ultimate ferry journey in Italy has to be the train to Sicily. Yes, the Rome-Palermo train does exactly that: it goes from Rome to Palermo, including being shunted on and off the ferry. The train is longer than the ferry, so the carriages shunt back and forth a few times as the train is divided up over a number of tracks. Little wooden steps are put down enabling you to alight and stroll about on deck or visit the café. That does a roaring trade in arancini, a Sicilian delicacy that’s a rice ball about the size of a cricket ball, containing meat, vegetables and tomato or red wine sauce.

The ferry goes to Messina, which looked attractive. I decided to spend a night there before heading for Palermo. The hotel receptionist let me inspect the room before committing myself. Coming back down in the lift, it jammed between floors. I pressed all the emergency-looking buttons, and after five long minutes some staff came to prise open the doors so I could jump out. The receptionist was so apologetic she gave me a further discount on the price she’d already quoted for the room, by way of compensation. Five minutes well spent!

Back-tracking home from Sicily allowed me another night in Naples before boarding one of Trenitalia’s high-speed Frecciarossa trains to Milan. After two weeks in southern Italy, two things immediately struck me about Milan: how expensive a cup of coffee is; and how impressive Milano Centrale station is. Re-built by Mussolini in the 1930s, it’s worth planning a long connection between trains so you can hang around gazing at the wondrous building.

Not wishing to stay in Milan (expensive coffee!), I jumped onto a French TGV heading for Annecy and used the SNCF free wi-fi to book a room at an Ibis hotel near the station. I had time in the morning for an uplifting cycle ride along the shore of Lake Annecy before catching a train to Paris and then home via Eurostar. 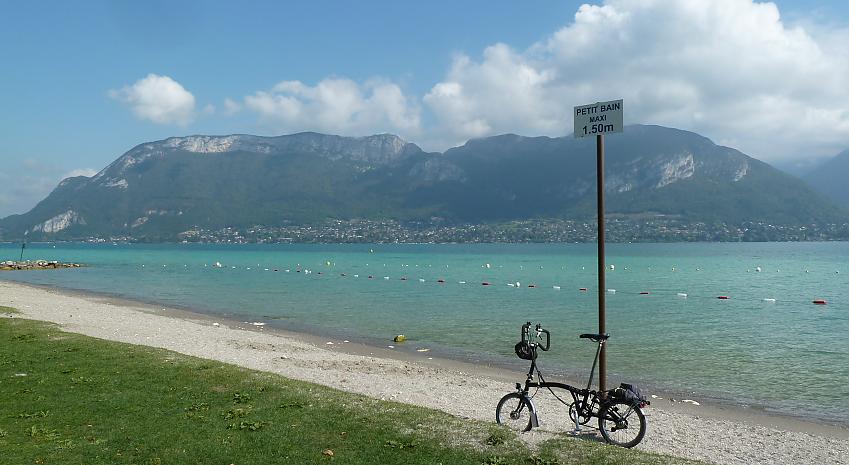 You can fly direct from Edinburgh to Palermo – in normal times, at least – but that takes away the fun, flexibility, and unpredictability of travelling by train with a folding bike. The bike gave me freedom to do numerous day trips that would have been more difficult relying on local transport or walking. I was also able to visit friends in southern France, Turin, and Florence en route.

Do it yourself: Interrail travel

At time of writing, Interrail ticket prices started at £170, depending on your age, length of ticket validity, and number of days travel. First class is available too. A Global (all- Europe) ticket can be used from your own station in Britain. Interrail gives you discount on Eurostar and some (but not all) ferry routes. You will at times be carrying your folding bike – to board a train, for example – so the rest of your luggage should ideally be limited to one bag you can carry on your back or shoulder.

No reservations are needed for a compact folding bike but it may need to be bagged in transit.

Distance: Glasgow to Palermo is over 2,000 miles but I did this by train! Local journeys with the Brompton ranged from 10-35 miles.

Route: Via London and France, then wandering around Italy. Through Switzerland on the way back.

Conditions: The traffic in Italian cities wasn’t as bad as I expected. Road surfaces generally better than in the UK.

Equipment: Brompton P-type folder with a rear rack. Spare tubes and essential tools, including a spanner to remove the rear wheel. An inexpensive cloth bag for taking it on Eurostar.

Next time I would…Practise removing the Brompton’s rear wheel beforehand so it would be more routine when punctures strike!

My epic ride from Scotland to Italy View

All aboard: a family cycling holiday by train View 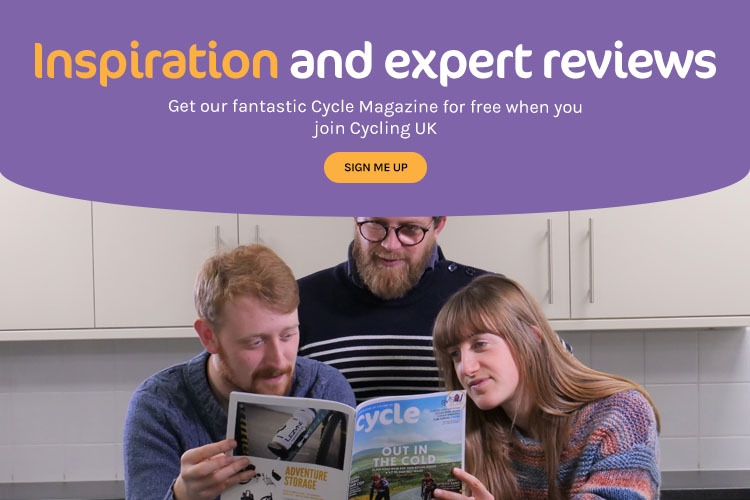 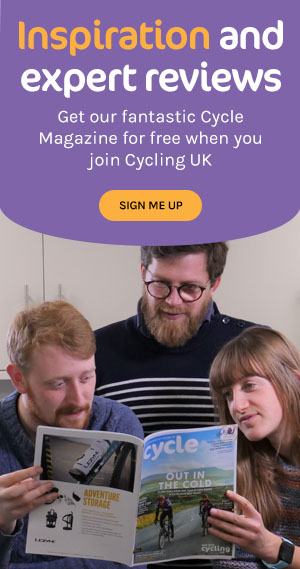