In the cover story for the December 2018/January 2018 issue of Cycle magazine Cass Gilbert headed to the Netherlands with his partner, five-year-old son, and non-cycling sister. He discovered it is the ideal location for a mixed ability cycling holiday.

Over a decade ago, my sister and I spent five days cycling around the Isle of Anglesey on a borrowed tandem recumbent trike. As short as the trip was, it meant a lot to both of us. For me, it was a chance to share my growing passion with a member of my family. And for my sister, it was the first time she’d felt the joys of self-propelled transportation. Tam is partially sighted and has mobility issues, due to cerebral palsy, so is unable to ride a conventional bicycle. The trip (which appeared in Cycle Feb/Mar 2003) was an undoubted success but, as often happens, the years went by and we never got round to following it up.

Fast forward 15 years and I received an email from her. She’d love to try another adventure. Was I interested? Never one to turn down a bike tour, I began organising the long-awaited sequel, except this time, it would also feature my partner, Nancy, and my son, Sage.

Given that the three of us now live in the United States, tying it in with a visit to Europe provided the perfect opportunity for us all to spend time together. For Tam, it was a chance to get to know her nephew better, and for Sage, the chance to enjoy the attention of a doting aunt, and perhaps help him understand the challenges she faces each day.

We settled on the Netherlands for obvious reasons. It’s close to the UK, it’s flat, and the bike infrastructure is second to none, suiting the varying needs of our mixed-ability group. And, with the heatwave Europe experienced over the summer, we could even rely on some blue sky and beachside riding, sure to be a hit with a five year old.

For our week-long trip, we borrowed a Hase Pino from London Recumbents. The Pino would allow Tam to sit in the recumbent position and chat easily to me as we rode, and it’s more compact than most tandems and thus easier to get on a train.

A FollowMe Tandem – a somewhat heavy but effective device that couples a child’s bike to the parent’s – would allow Sage to ride independently when he wanted, or be hooked up to his mother’s bike when the roads became too busy or he needed a break. Although Sage had been cycling for over a year, he’d never completed a tour before on his own bike. Prior to this trip, we’d always pulled him in a trailer or used a trailer-cycle. 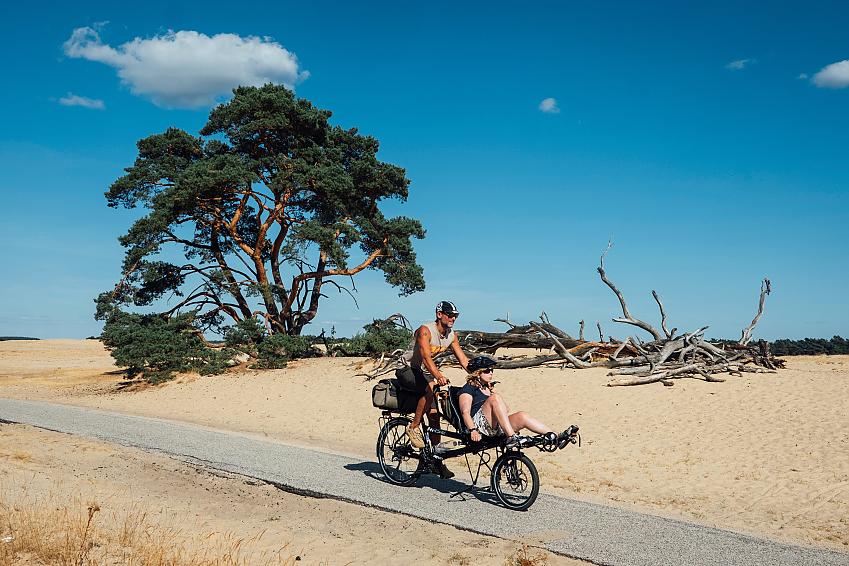 Cass cycling with his sister Tam. Photo by Cass Gilbert.

Friends of the bike

After negotiating the intricacies of getting from London to the ferry port in Harwich by train – no mean feat, given our assorted bikes – we pulled up beside more than a dozen other cyclists. As soon as we’d passed through the ferry’s open jaws and been swallowed into its belly, we tied up our bikes and grabbed what we needed for the night. We were filled with an excitement that comes only with seafaring travel, in the way it’s so very much part of the whole adventure.

There’s an immediacy that comes with ferry travel too. Come morning, we connected directly with a bike path right out of the port, where we felt a collective sense of calm, away from cars and the stress they often bring. We even had company for the first few miles, cycling with a German family we’d met on board, who were returning home after a trip around the Isle of Wight. Together we made up quite the entourage: three kids’ bikes, two FollowMe Tandems, an overloaded Brompton, a Hase Pino, a couple of upright bicycles with panniers and baskets, and big smiles all around.

Heading north, we followed EuroVelo route LF1 along the coast, wending its way independently of main roads. As mellow family rides go, I can’t imagine anything finer. This signposted route is a string of beaches, dunes, cafés, and seaside towns. It’s almost completely traffic free, with beachside parking that heaves with hundreds of solo bicycles and cargo bikes. LF1 is an alternate biking universe where cars soon become a distant memory; dotted lines, speed bumps, and crossings are all shrunk down to biking proportions. Throw in sunshine and a light tailwind and you have a nigh-on perfect start to a trip.

The only fly in the ointment to otherwise blissful days in the saddle was our difficulty in finding accommodation. Tam had decided that camping was too much to take on, so I’d signed us up with the organisation Vrienden op de Fiets, which offers affordable, B&B style accommodation exclusively to cyclists.

What I hadn’t appreciated was that during the summer, most options are full or the hosts themselves are on holiday. In the end we only found one, bachelor Derek The Lifelong Smoker, who managed to make room for us in his tiny terraced house. At first he seemed completely bemused by the sight of us, but quickly warmed to our cause, nipping out into his yard to smoke rollies between making us comfortable. 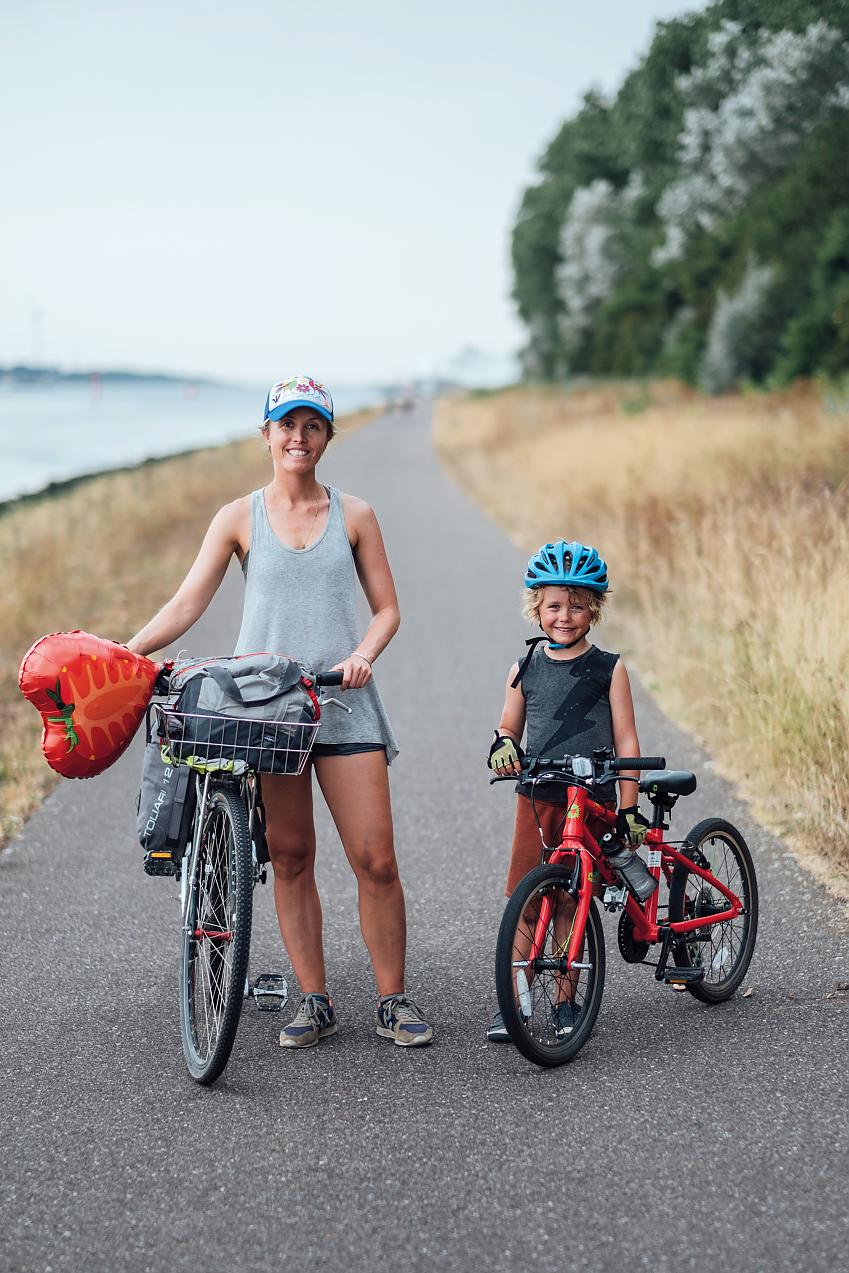 From the coast town of Zandvoort, we headed inland to Haarlem. Whilst the scenery wasn’t especially impressive, it was still a very appealing ride for our group, given that we barely touched a main road, in typical Dutch style. Onwards, a train whisked us to Arnhem, where the second part of our trip began: an exploration of Hoge Veluwe National Park.

If you’re unfamiliar with the Kröller-Müller Museum, I’d urge you to visit. It’s located in the heart of the Veluwe National Park, a beguiling region of rolling heath, dunescapes, and pine forest. The museum dates back to 1938 and houses a vast Van Gogh collection, in a building set within a sprawling sculpture garden. The surrounding forest hides magnificent works of art that either blend seamlessly with their surroundings or stand out like esoteric oddities. Benches and chairs offer perfect spots to contemplate each in the changing light, or just to sit and read a book. Not only that, but the park offers a fleet of free bikes to reach the museum for those who choose to park at its gates. (You can also arrange accessible bikes for wheelchair users.) The Hoge Veluwe National Park is a wonderful, whimsical place that completely enchanted us.

All this time, Sage’s riding was noticeably improving. He suffered just one crash that resulted in grazes, a culmination of his increasingly brash riding, too many kilometres in the saddle that day, and a late bedtime the night before. But he bounced back and genuinely seemed to love almost every minute of our holiday. ‘This is our style! We were made for this!’ he yelled out as he darted past me on one occasion.

Yes. He really said that. As an advocate of bikes as a form of both recreation and transportation, my heart melted. In a week, he’d transformed from a child who understood the basics of riding but lacked road awareness and confidence, to a cyclist who could now pedal safely on a public road and cover distances of up to 30 kilometres a day. 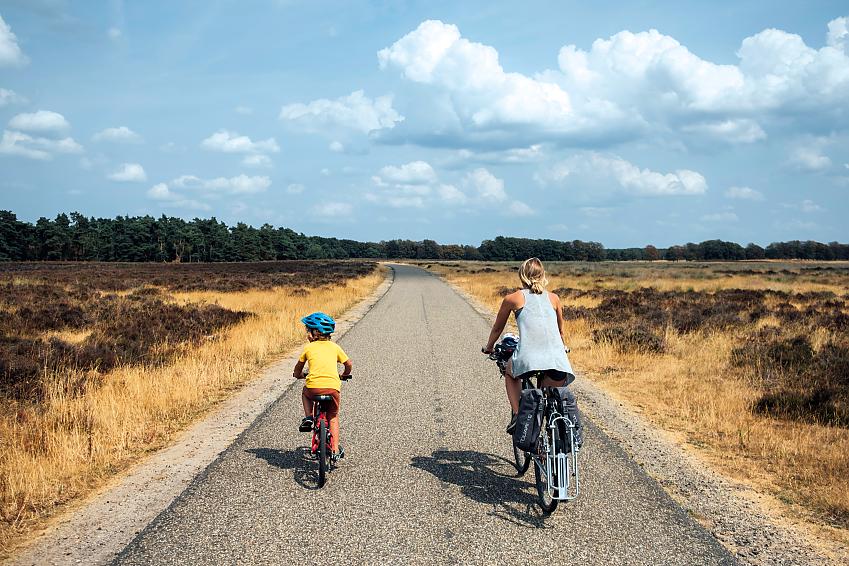 This was Sage's first tour on his own bike. Photo by Cass Gilbert.

Exploring Holland in our own, modest way, was providing an ideal chance to develop important cycling skills – like negotiating junctions, watching out for pedestrians, overtaking slower riders, and being overtaken by speedy roadies – away from the stressful arena of high-consequence car traffic. Not only is the country’s bike lane infrastructure ideal for teaching two-wheeled confidence to young children, it serves to instil a crucial awareness of the viability of bicycles as an viable alternative to cars at such an impressionable age.

No wonder so many Dutch see riding bikes as a completely normal activity, whether they are cars owners or not; their approach to both urban living and local recreation is inspiring. And it’s all without fuss and fanfare. I saw a mum with two kids and a sun parasol in a cargo bike; a guy with a surfboard attached to the side of a cruiser; an elderly lady’s city commuter with a dachshund in a wicker basket.

I was delighted that Tam was really getting into the swing of things too. We stopped for lunchtime picnics, always a highlight for me of any bike tour. ‘This is exactly how I’d imagined a bike trip would be,’ she said. She read stories to Sage when we paused in the shade, and in turn, he helped her with the clasp of her bike helmet when it was time to ride once more.

Calling upon the train system again (the lifts at the stations even fit tandems!), we finished our trip with two days riding along the Linge River, for the stereotypical Dutch experience of windmills, canals, barges, and flowers. 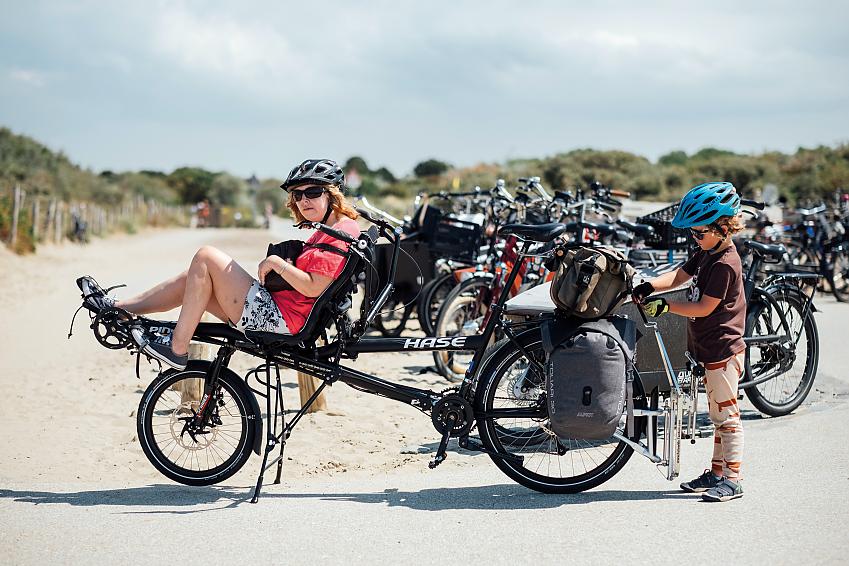 Over the years, Nancy, Sage and I have travelled through Mexico, Ecuador, and Bolivia with our bikes and trailer. But it was the trip closest to my original home that was perhaps our most rewarding. Holland’s cycling infrastructure is a complete game-changer for family tours. Distances are manageable and the country’s public transport system opens up a variety of scenery in a short space of time.

The FollowMe Tandem and the Hase Pino made a big difference in making the trip so successful. For Tam and me, the Pino allowed us to pedal together and chat as we did so, without the logistical complications of the tandem trike we’d used before. The FollowMe Tandem helped Sage enjoy his first taste of independent travel without exhausting him.

It took some effort, but both Tam and I were thrilled we made this trip happen. As suitable as our route turned out to be, we could likely have ridden in almost any direction in Holland and had an equally fulfilling time. I’d love to have kept riding along the coast to the West Frisian Islands, for instance. In fact, I’d recommend a tour of the Netherlands to any family looking for an active holiday that has the transformative power to both improve a child’s cycle-sense and change perceptions of what we should all strive for in our society. It really is as easy as hopping on the ferry, following a bike path, and just riding…

Glorious Holland: it may be almost as flat as its delicious pancakes, but when it comes to a family bike tour, it’s nothing short of utopia. 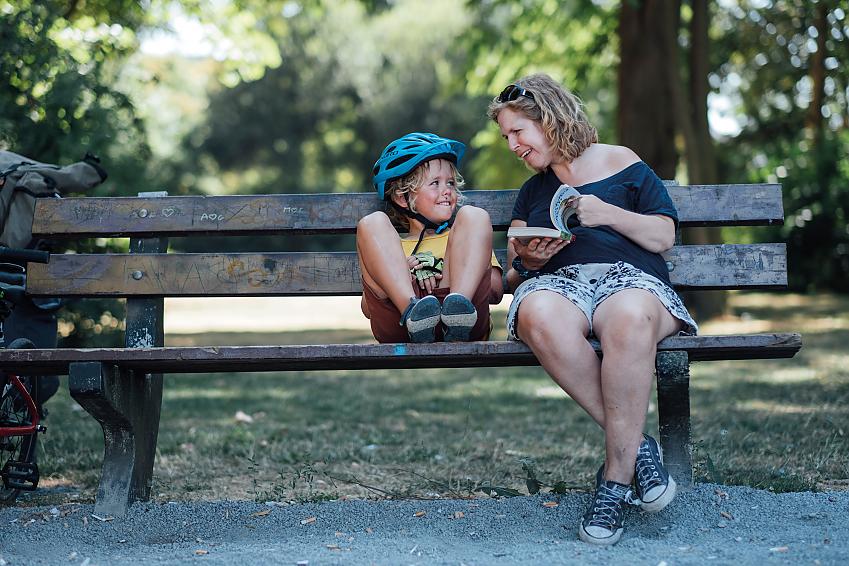 Tam and Sage read a story together. Photo by Cass Gilbert. 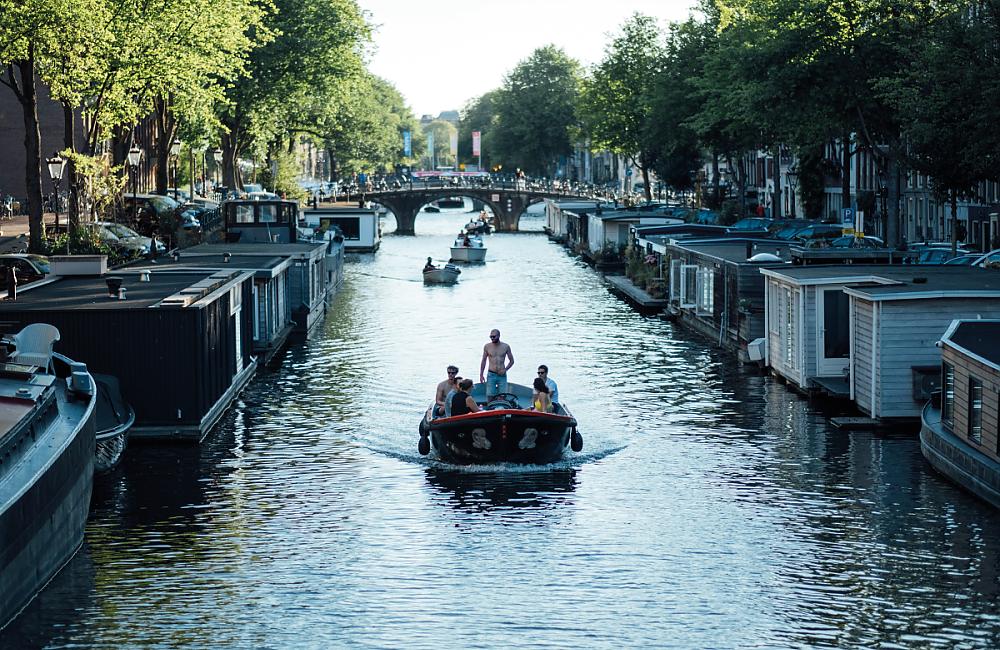 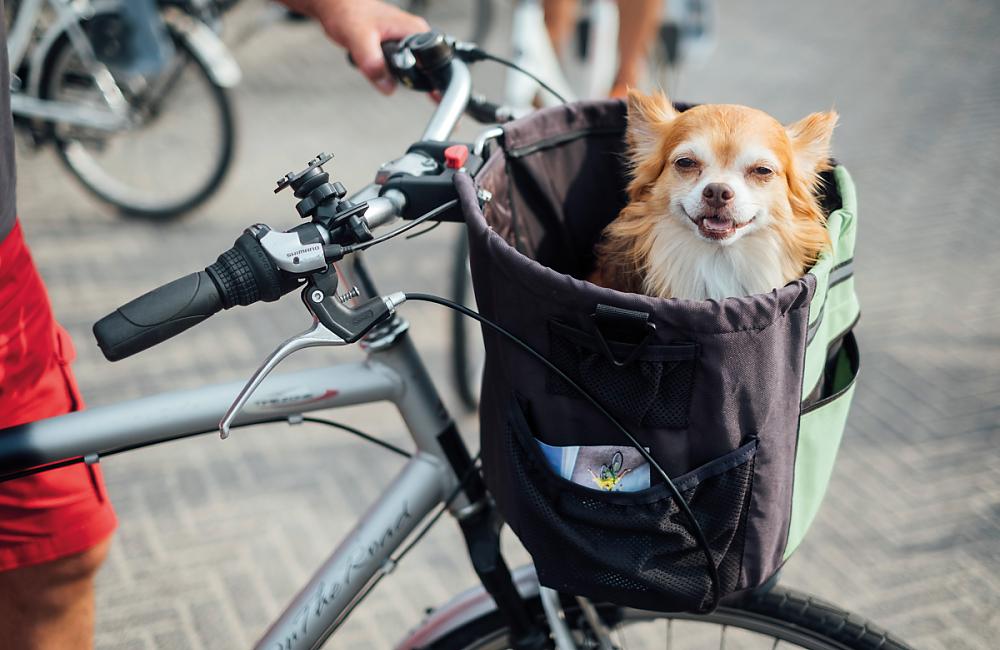 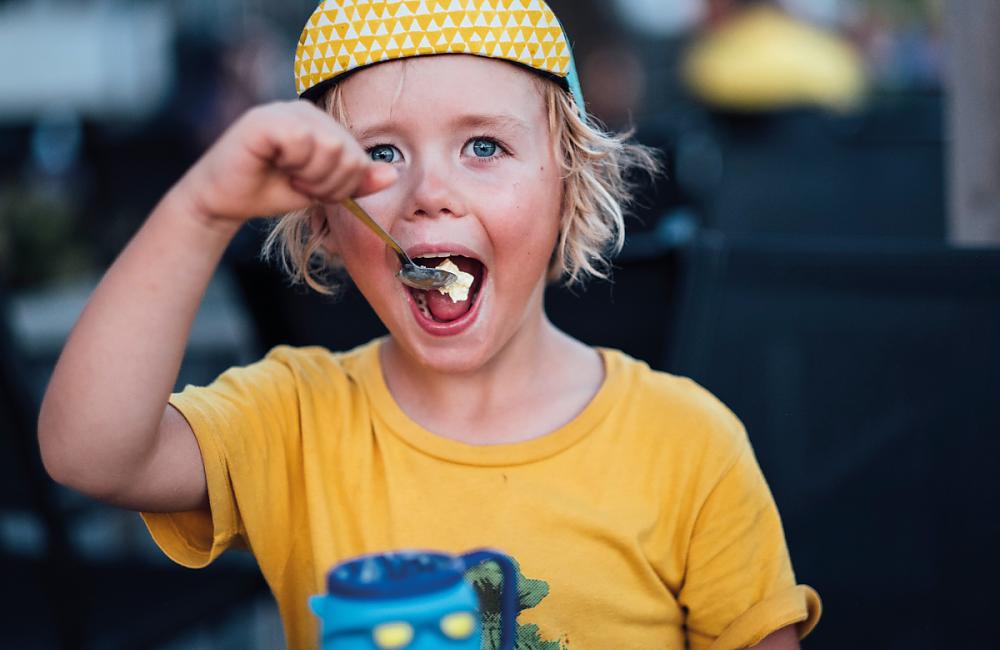 We took the train from London to Harwich, having picked up the Hase Pino in Dulwich. We’d originally planned to borrow a similar tandem, a Circe Morpheus, along with a Circe Helios for Nancy and Sage. But the added complexities of collecting two tandems from Cambridge by train (I don’t drive) thwarted us. In the end, one tandem and a FollowMe made logistics more straightforward.

You can take a tandem on the East Anglia train from London Liverpool St to Harwich, but you’re advised to choose the service that changes in Manningtree as there’s more room for bikes.

Stena Line sails to the Hook of Holland twice a day; one is an overnight service.

No issues with bikes of all shapes and sizes.

Conditions: Fantastic weather – if anything, too hot! We followed carfree bike paths 80% of the time.

Next time I would… Bring a tent to help with the logistics of accommodation. We’d also allow a day off the bike halfway through the trip.