Feature: Cycling for all

Feature: Cycling for all

Cycling is open to everyone – but it’s more open to some than others. Cycling UK's communications and media officer, Christina Bengston spoke to several groups who are helping to change that.

Cycling is an accessible activity already: all you need is a bike, right? If it were that simple, cycling’s demographic would match that of the wider UK population. It doesn’t.

The following are all much less likely to cycle than able-bodied, heterosexual white men: women; people from a black, Asian, or minority ethnic background (BAME); the lesbian, gay, bisexual, and transgender communities (LGBT); and people with disabilities. Find out how less likely.

I spoke to some of our groups to ask them what they are doing to increase and encourage underrepresented groups to cycle, and to find out why it’s so important to have groups aimed at specific demographics.

Mohsin Vawda got back into cycling as an adult through the Fatima Elizabeth Phrontistery, a weekend education centre for Muslim children that was providing monthly cycle rides for parents whose children attended. He says: “I participated in these rides for around a year, which got me looking into more regular rides.”

Mohsin looked for a group that “provided group rides at suitable times that fitted around family commitments and had members from a diverse range of backgrounds.” 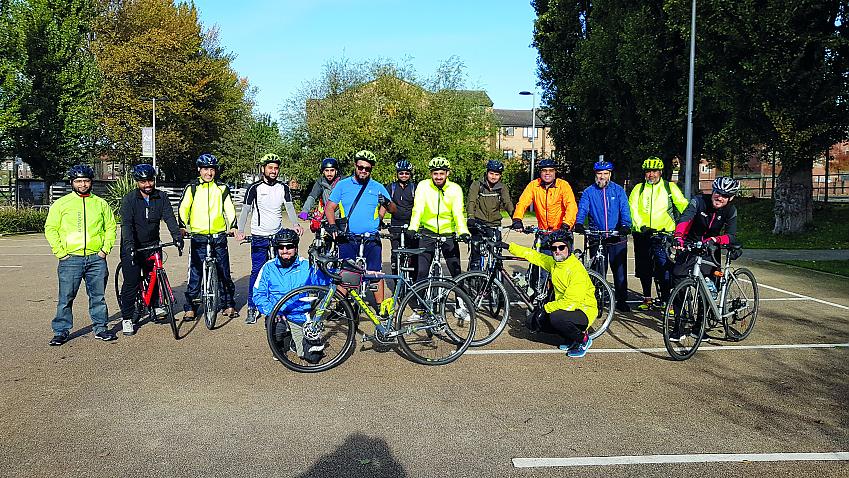 Not finding a group he identified with, he set about creating Cycle Brothers with the help and support of Fatima Elizabeth Phrontistery and Sarah Javaid, founder of fellow Cycling UK group, Cycle Sisters. “Sarah offered guidance and assistance with obtaining ride leader training, bike maintenance courses, council loan  bikes, and invaluable experiences from her own club,” says Mohsin.

Since our launch, we have three additional ride leaders and have had over 100 cyclists join our rides.

Cycle Brothers formed in 2019. “Since our launch, we have three additional ride leaders and have had over 100 cyclists register and join our rides,” says Mohsin. “They come from a variety of races, cultures and backgrounds. One of my main aims is to promote cycling in our local Asian community within Waltham Forest, so we have set up an outreach programme via one of the local mosques.

“It is important to understand the needs of the participants in order to make them feel welcome, accepted, and comfortable. Cycle Brothers provides a perceived safe space to begin a journey into cycling without the fear of being judged.”

Bury Tandem Club has been supporting visually impaired cyclists since the 1980s. “Our club is unusual in that we operate more as a cycling club rather than a cycling charity for disabled people,” says Ben Colman, who has been a pilot for the group for over 20 years. “We meet up on Sunday mornings, we have our own club kit, and we ride 40-60 miles, with a café stop in the middle.”

Many of the club’s stokers were keen cyclists before becoming visually impaired. Ben says: “Being blind or partially sighted is much less of a disability on a tandem than in other walks of life. In fact, some of our stokers are our strongest riders.”

Stokers say they get a sense of freedom and power, and that they're not disabled while on the tandem.

Rashid Khan, one of the visually impaired stokers, recalls his first tandem ride. “I didn’t want to get off,” he says. “You become a team. Even though I don’t know this guy, I’m putting my trust in him. 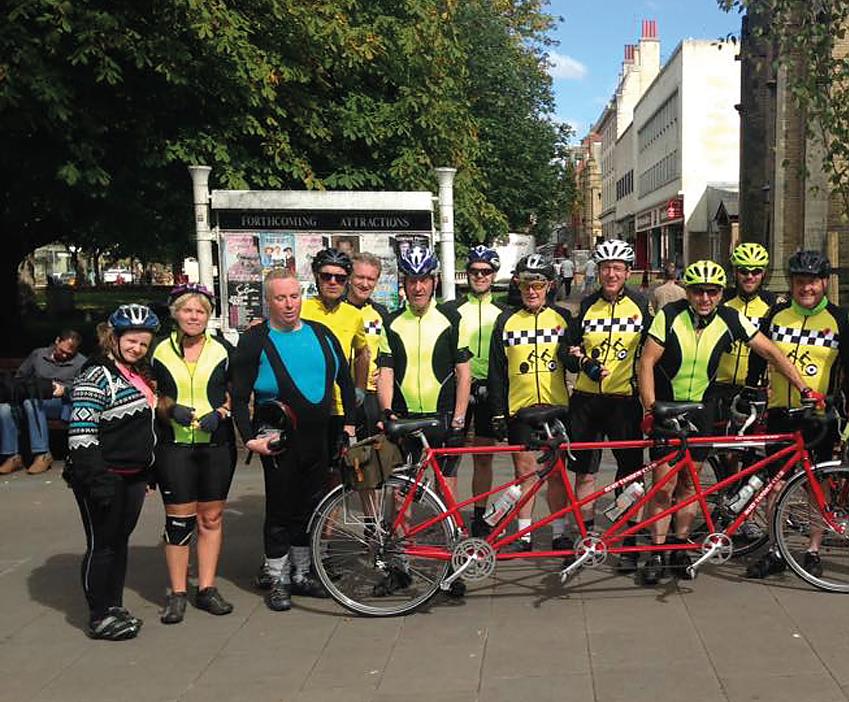 “The first session was like a punishment; I couldn’t feel my legs, my bum. But I absolutely loved every minute of it. It’s fantastic. It’s the whole package: physical health, mental health, and the social aspect.”

“Stokers say they get a sense of freedom and power,” Ben adds, “and that they’re not disabled while on the tandem. It’s also an opportunity to meet other visually-impaired people who all have different strengths and talents. They’re all linked by a love of cycling rather than their disability.”

Richard Hearne took up cycling five years ago and, after riding alone for a year, decided to find a group to go out with. But as a gay man, he was nervous: “I dreaded going along if there was going to be a café stop where it would be all men who knew each other and I’d be asked: ‘Do you have a girlfriend?’”

Richard looked in vain for a cycling group for LGBT people in Manchester. He says he thought: “There has to be a need for a cycling group that welcomes some of the 200,000 LGBTQ+ people in Greater Manchester.” He didn’t find one, so  in June 2019 he founded PRiDE OUT, a group that aims to make cycling more accessible for the LGBTQ+ community, no matter what their identity or ability. 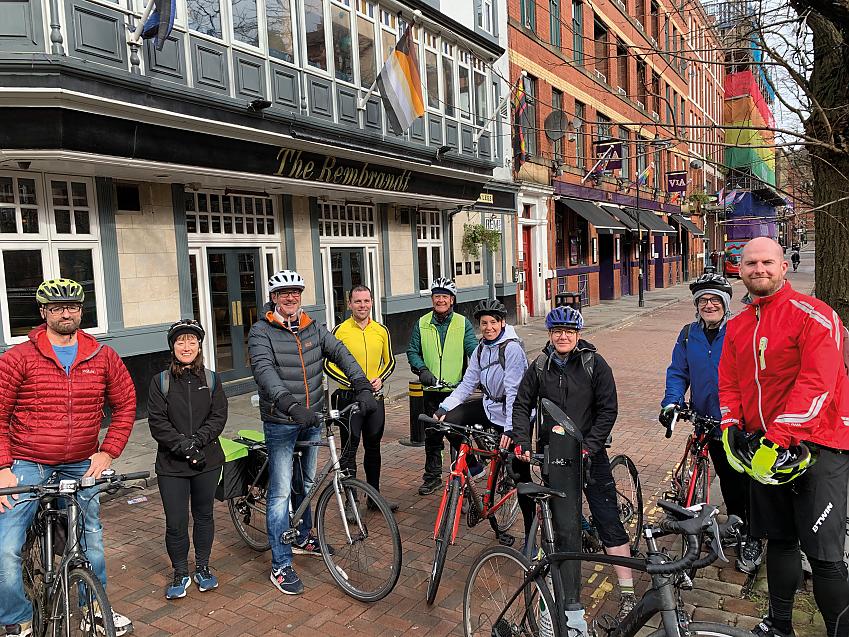 “Sport tends to be dominated by white men,” he says. “Women, the LGBT and BAME communities are underrepresented. They struggle to see people who they identify with, and this creates a fear of being made to feel unwelcome or an outcast.

Joining a social group can be terrifying for anyone. Groups like ours mean there's one less hurdle.

“It’s about creating a safe space, where there’s less of a worry. Joining a social group can be terrifying for anyone. Groups like ours mean there’s one less hurdle for people to overcome. “Since building this group, I’ve never had so many people I know – acquaintances, friends, and people to go out on a bike ride with – and it’s just the best feeling, feeling part of a community, feeling like you belong.”

PRiDE OUT has just launched its new website and already has big plans for the future, aiming to establish LGBTQ+ cycling chapters across the country.

After suffering a bad knee injury playing hockey, 40-year-old Megan Evans was told that if she didn’t want to end up having a full knee replacement before she turned 50, she should find a different sport. Being used to team sports, Megan found cycling alone difficult: “It was easy to find an excuse not to go out on my bike,” she says, “particularly as I didn’t know how to fix a flat tyre or put a chain back on.”

Megan joined local cycling group Liskeard Ladies Cycling Group. “It was a mixed sex group but mostly men. I struggled to keep up and I stopped going. Then I was given a flyer with details of a new cycling group for ladies, which Ann Wendik, who cycled with the mixed group, decided to start.

It was clear that the women felt more relaxed. There was no pressure, and it was sociable and supportive.

“I went on the inaugural ride and I’ve been going ever since. From that very first ride, it was clear that the women felt more relaxed. There was no pressure, and it was very sociable and supportive.” 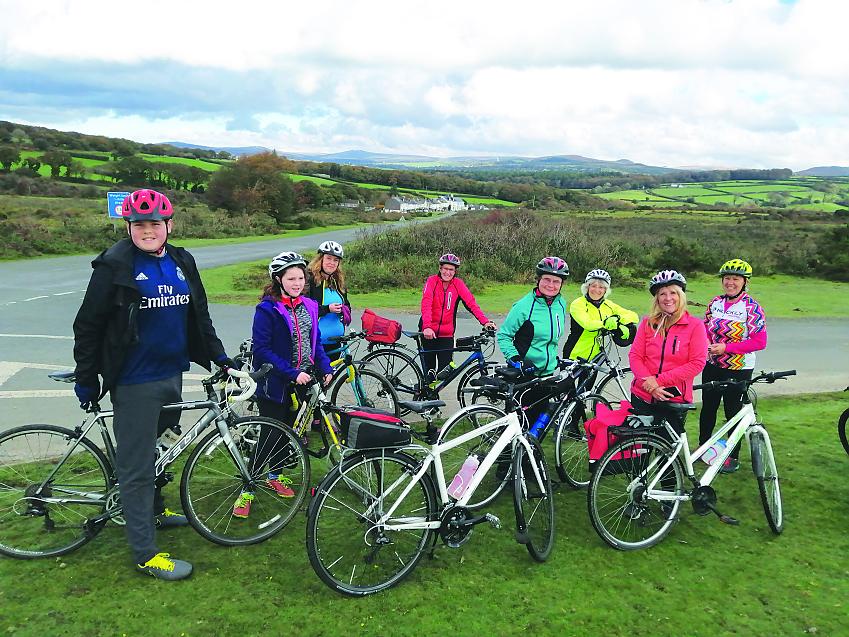 Megan helps organise and lead rides now. “I think it’s so important that no one gets left behind,” she says, “and that we support each other. A few words of encouragement can help someone keep going. Diversity comes in all shapes and sizes, ages, colours, and cycling abilities. I don’t think we necessarily have to separate the sexes when cycling but for some women, particularly those who are just starting out, it’s a safe environment.”

Alex Cuppleditch, Cycling UK’s head of volunteering, also leads on diversity and inclusivity. She says that groups aimed at specific demographics play an important role. “As an organisation, increasing diversity within cycling is embedded into everything we do.

Diversity is the theme of this year’s virtual Volunteer Celebration on 3 October. We want to encourage people from all walks of life to volunteer with us and to get involved with cycling. Cycling is for everyone and should be available for everyone, no matter their background.

“Many of our groups are very welcoming to people from all backgrounds, but this doesn’t always go far enough. We have to be open and flexible to create spaces and groups that help people feel supported to go cycling. What is comfortable for one person may feel very different to someone else.”

Inspiring cyclists: Tandem cycling with a visual impairment View
Cycling UK continues to support the UK to cycle
This remains true during this difficult period with the ongoing threat of coronavirus Covid-19
Read our latest advice on cycling