There are vital lessons from the lockdown when it comes to transport. Cycling UK's communications officer, Rob Kingston examines cycling’s surge and how to sustain it

The coronavirus pandemic has been catastrophic for the health and wealth of the UK, as it has for most of world. Yet for all the pain and disruption, the resulting lockdown also gave us a chance to take stock of the way we live our lives.

The enforced changes to our daily routine made us question how much of what we considered normal was truly necessary. Time spent outside, initially on our government-sanctioned daily exercise, became something to treasure. When we did venture out, we found cleaner air and less noise pollution, as traffic dropped to levels last seen in the 1950s.

It was a much nicer environment for cycling, whether by regular riders or newbies dusting off a neglected bike – or buying a new one, as bicycle shops, classed as an essential service, were permitted to stay open throughout lockdown. The sunniest spring since UK records began also helped to tempt people onto their bikes. In early June, the Transport Secretary, Grant Shapps, said that despite a fall in travel generally during the pandemic, there had been a 100% increase in  cycle journeys across Britain on weekdays, and a 200% increase at weekends.

It was packed with people of all shapes, sizes and ages, out riding bikes. I confess there was a tear in my eye to see it: normal people in normal clothes discovering the bicycle

Chris Boardman, the Olympic gold medallist and Greater Manchester walking and cycling commissioner, saw this first hand on the Wirral Way, an off-road route near his home: “It was packed with people of all shapes, sizes and ages, out riding bikes. I confess there was a tear in my eye to see it: normal people in normal clothes discovering the bicycle.”

Duncan Dollimore, Cycling UK’s head of campaigns, says that while this surge in cycling is welcome, governments need to seize the opportunity if it is to be the start of a lasting change. “Lockdown has allowed a glimpse of a different, more active future, and it would be a travesty to let this opportunity slip through our fingers and return to business as usual,” he says.

“We know that cycling is a great way to reduce car use and ease pressure on public transport while maintaining social distancing – and, indeed, the government has asked us to walk or cycle whenever possible – and people have shown that they are prepared to rethink the way they travel. But they need infrastructure and investment to enable them to make this change, or we risk losing the chance for what Boris Johnson called a ‘new golden age’ for cycling.”

To gauge people’s attitudes to cycling during lockdown, Cycling UK commissioned a YouGov poll (see Our Survey Said), which found that 36% of people could rethink their travel habits in the future to use motor vehicles less. But in order to  do this, they would like to see changes made to our streets to make cycling safer and easier. 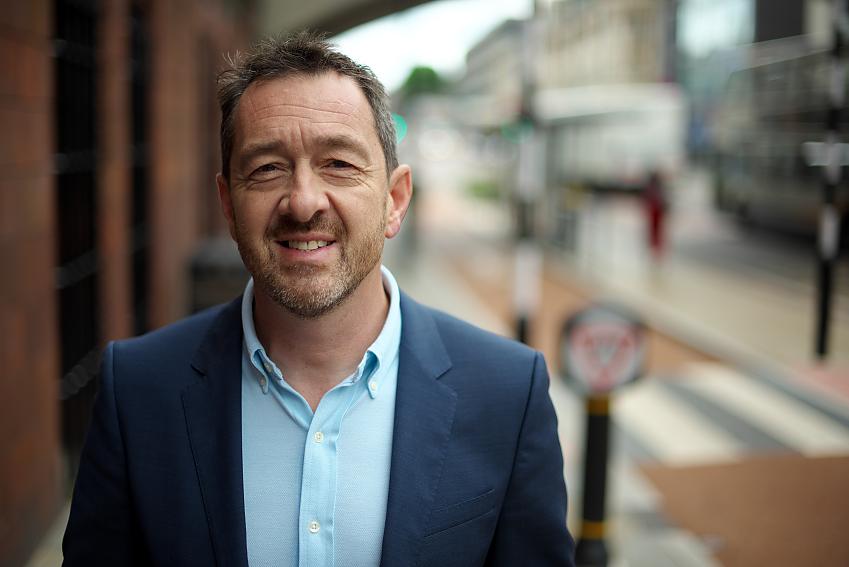 While statistics show that cycling is an extremely safe mode of travel, that is not the perception for many people, as Dollimore points out: “If the roads don’t look and feel safe to cycle on, only the brave will choose to do so.”

Richard Ingham, the bicycle mayor of Cumbria, agrees lockdown has shown that cars are the big problem. “Have those hills been flattened overnight or that rain tap magically turned off?” he asks. “When planners and policy makers tell me those are the reasons the UK won’t take to cycling, I’m tempted to reply: ‘It’s the traffic, stupid!’ Regular cyclists understand that, but the past months have just proved beyond all doubt what an inhibitor traffic is to cycling.”

As more people return to work, those empty roads are already filling up again. Lee Craigie, Active Nation Commissioner for Scotland, noticed this around Edinburgh: “The quieter roads have given many people the confidence to dig that old bike out of their shed,” she says.

“Lately, though, car traffic has been returning and the increased bike traffic on the roads seems to be upsetting many (though not all) car drivers, who appear to consider roads as places only they should be. We drastically need a cultural shift
away from this way of thinking. Anyone who drives, cycles, walks, or wheels needs to feel as entitled to their space and safety as other users.”

And, as Chris Boardman points out, those who previously relied on public transport face being cut off as restrictions reduce capacity. “The bicycle has not just offered a practical travel solution; at present it is a moral one too,” he says. “On average, one in three households in cities across the UK don’t have access to a car, and now most of them can’t use buses, trams and trains safely either – so if not bikes for those three- to five-mile journeys, what else are they supposed to do?” 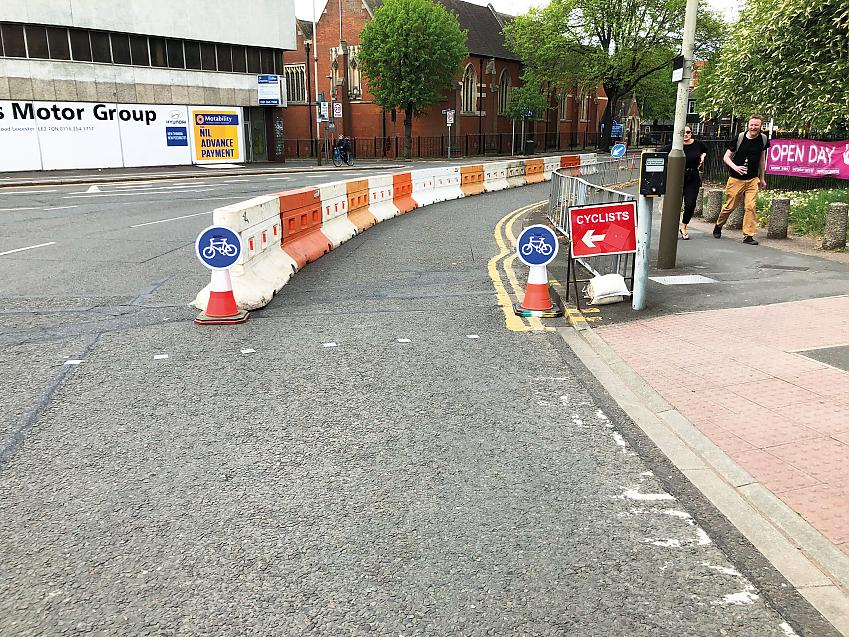 So what needs to be done to ensure there is a lasting positive legacy of this terrible time? Investment by UK governments in temporary infrastructure, such as “pop-up” cycle lanes, road closures and speed restrictions, has been a welcome first step. In England, the Department for Transport pledged £225m of emergency funding for active travel, on top of £25m to provide £50 cycle repair vouchers. The first £45m had just been allocated to local authorities at the time of writing, with councils required to bid for the remaining funds by 7 August.

Other nations within the UK were quicker off the mark. In Scotland, £10m was allocated for temporary infrastructure at the end of April, topped up to £30m the following month; at the time of writing, more than £19m of this fund, called Places for People, had been allocated to 21 local authorities. The Welsh government has distributed more than £15m in temporary infrastructure funding, and in Northern Ireland, Infrastructure Minister Nichola Mallon announced the rollout of pop-up cycle lanes throughout Belfast in June.

Cycling UK has been actively calling for this type of infrastructure. Our Space for Distancing campaign spurred more than 11,000 people to write to their local councils (or MLAs in Northern Ireland) about where they wanted to see better cycle facilities. More recently we have been encouraging people to use Widen My Path. In Wales, Cycling UK has also joined forces with Sustrans and others to create Transform Cymru (transformcymru.org), which has published a plan for sustainable transport post-lockdown.

While vital, government investment is only part of the solution. Dr Rachel Aldred, professor of transport at the University of Westminster and director of the Active Travel Academy, elaborates: “We need a co-ordinated effort from different levels of government, with other organisations like large employers also supporting. Central government should provide not just more money but more technical support, to help authorities which lack capacity and don’t have experience of building high-quality bike infrastructure.

“Employers should be encouraged to offer support to staff who live within a cyclable distance: for instance, access to the Cycle to Work scheme and short-term loan bikes to allow them to try out cycling before they buy.”

We also need to keep up the pressure as individuals, says Lee Craigie: “We have to be vocal about our desire for change in road allocation, so that our decision makers can stand strong in the face of the minority who insist on their right to drive and park without restriction.”

However, to achieve the much talked-about “modal shift”, the onus is ultimately on the UK’s governments to lead from the top, says Duncan Dollimore. “Westminster has pledged to ‘decarbonise’ transport and make cycling and walking the first choice for short journeys, and we’re hearing bold statements of ambition from senior ministers around prioritising active travel.

Lee Craigie on her Cargo bike

“But those ambitions won’t be realised without substantially increased long-term investment. The £225m emergency fund should enable proactive councils to start reallocating road space for active travel, but it’s less than 1% of the £27bn committed to road building.

“For councils to turn individual schemes into the connected networks needed to turn rhetoric to reality, they need to know how much money they’re going to get to build cycling and walking infrastructure not just over the next few months, but the next few years.”

In the meantime we can all help to show that the demand is there, by contacting our local councils and using online tools such as Widen My Path. As Chris Boardman says: “I hope the positive travel experience almost everyone has had is something they have realised they want to keep. It could signal a step change in how we use our roads, but if we don’t act immediately and let our politicians know it’s something we want, it will undoubtedly slip away. So now is the time to get involved, and make sure the country’s leaders know which way you want them to go.”

What you can do

9% of adults surveyed said they had been cycling more since lockdown started.

Of those cycling more, the measures most likely to make them continue to do so were:

36% agreed they could rethink their travel habits in future to use cars/motor vehicles less.

42% of those surveyed had cycled more with their children since lockdown started.

62% said they felt safer cycling on the roads than before lockdown.

79% said outdoor exercise was important for their mental wellbeing.