Not for racing but club riding, commuting, winter training, and summer mile-eating. Richard Hallett tests £1,000 models from Ribble and Tifosi

The ideal ‘general purpose road bike’, if there is such a thing, is as specialist a machine as any. Rather than being little more than a race bike with mudguards attached as an afterthought, it is purpose-built to combine the decent turn of speed needed on a tough winter training ride with the durability, reliability and low running costs required of a daily commuter, along with the ability to fit a rear rack and carry light luggage.

Within a couple of hundred metres of riding the second of the two, it is clear that, notwithstanding their common goal, these are very different beasts.

Until quite recently, the Tifosi CK7 tested here would have been typical of the type, but while it still fulfils the brief admirably, it and others like it are up against a new breed of all-rounder notable for the use of disc brakes. Ribble’s 725 Disc has these and, interestingly at the price point, a frame built using a high-end lightweight steel tube set. It’s an intriguing face-off: steel versus aluminium; disc versus rim brakes. Can there be a winner?

Within a couple of hundred metres of riding the second of the two, it is clear that, notwithstanding their common goal, these are very different beasts. There are obvious similarities: both roll on slick tyres in the now-ubiquitous 700×25C format; both squeeze under the Cycle to Work-friendly £1,000 price point; and, usefully, both wear fulllength mudguards (although they are an optional extra on the Ribble, adding £27 to the price). Bottom gear is different. The Tifosi’s is an old-school 34/27, the Ribble’s kinder 34/32. But the Tifosi’s rear mech will handle a 32t sprocket if needed.

Back to the obvious differences: one uses rim brakes and the other discs, while one has an aluminium frame and the other steel. Frame material and brake technology are largely responsible for their respective characters, although not simply for the usual reasons.

It’s worth noting, incidentally, that both bikes exist in versions with rim or disc brakes. The Tifosi CK7 Disc is £200 dearer, the Ribble Endurance 725 Tiagra (with rim brakes) £100 cheaper.

Billed as an all-season commuter/light tourer, the Tifosi has a lustrous metallic blue paint finish set against black componentry. Fat 6061 aluminium alloy frame tubes joined by neat, if beefy, welds give it a sturdy, durable look. A shortish head tube means it’s possible to find a tucked riding position without ‘slamming’ the handlebar stem, although riders looking for a more ‘endurance’-style posture may end up with the stem inverted. 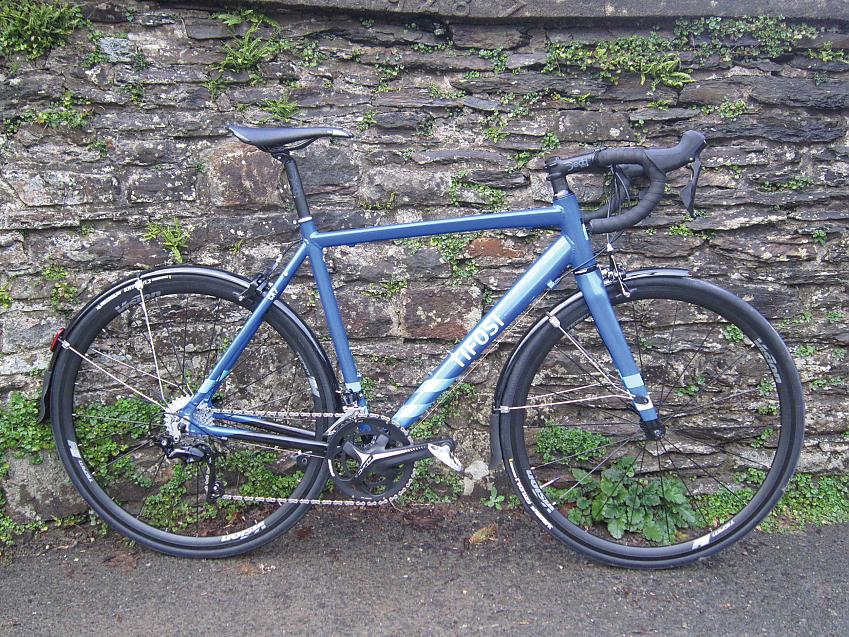 Flattened or manipulated in various planes, the enormous down tube provides the frame’s visual focus and matches the fat head tube; the rear triangle looks comparatively modest but does have meaty dropouts. The fork has straight carbon-fibre blades and an aluminum steerer tapering to 1 1/8" from 1 1/2" at the crown, presumably in search of further rigidity. Lastly, the top tube has a vaguely triangular profile with a wide top – of which more later.

Component choice is eclectic, with Shimano’s 11-speed 105 dual control levers and derailleurs teamed up with an FSA four-arm chainset. This has a 94mm BCD and could handle a smaller inner chainring than the regular 34t ‘compact’ example fitted. As sold, the Tifosi runs a 32" low gear; it’s on the high side for hilly terrain, especially if toting luggage, but a swap for something lower is easy enough. Miche dual-pivot calliper brakes, Deda Elementi bar and stem, and Vision Team 30 Comp wheels complete the specification.

The first riding impression is that descending is something to be savoured, thanks to the Tifosi’s fine road manners. Its long wheelbase makes for a calm, secure ride and helps counter the frame’s inherent rigidity. If the bike as a whole feels a trifle wooden, its stability and light, accurate steering make for pleasantly relaxed riding. 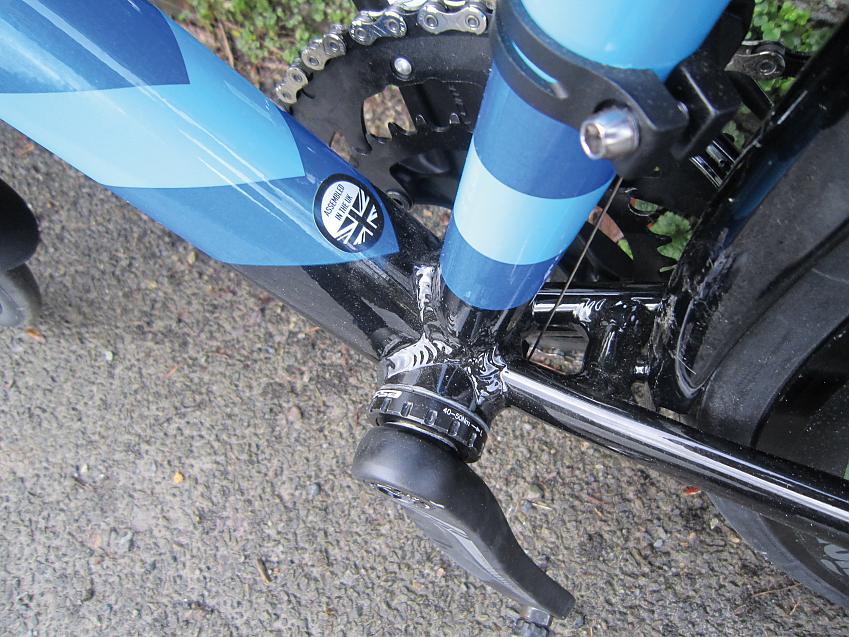 Despite its Italian name, Tifosi is a British brand, and the bikes are assembled here

Indeed, only the 35mm-wide top tube marred an otherwise impressive frame design. It won’t be an issue for all, but anyone whose knees touch and rub against the top tube will find it annoying on a long ride. Frame detailing is comprehensive, with double bottle cage mounts, mudguard bosses, and rear rack attachment points on both dropouts and seatstays. 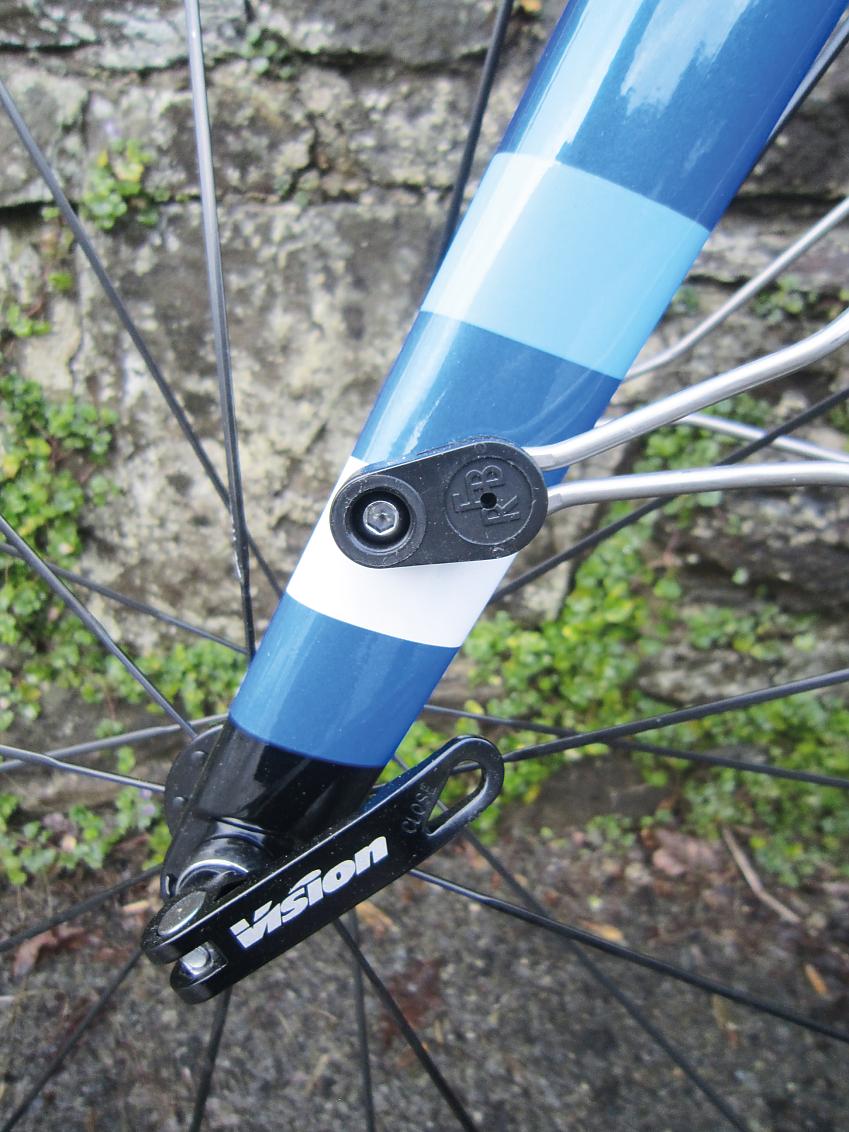 As well as mudguard mounts, the longer Tifosi offers more toe-room for them when riding.

Unfortunately, the test ride was interrupted by a pinch flat (hence the picture on p66) from a submerged pothole. This would no doubt have happened with any wheelset, but did point up the rigidity of the wheels, which have surely been chosen for strength and durability over resilience. They use a semi-deep section aluminium alloy rim stiff enough to cope with the rear wheel’s 2:1 spoke lacing pattern; in an effort to balance spoke tension on the heavily dished wheel, there are two drive-side spokes for every one on the non-drive side. A stiff rim ensures there’s no axial wander, but does little for ride comfort. The wheels are a candidate for early upgrading with something more forgiving.

The 10-speed Tiagra-equipped Ribble, contrastingly, wears what look like conventional tangent-spoked wheels, although their specification is largely dictated by the use of disc brakes. Mavic’s Aksium Discs have 24 spokes laced tangentially in both wheels, those in the front and on the rear non-drive side needed to resist the torsional loads imposed by the brakes. The use of plain-gauge spokes keeps costs down but adds to weight. 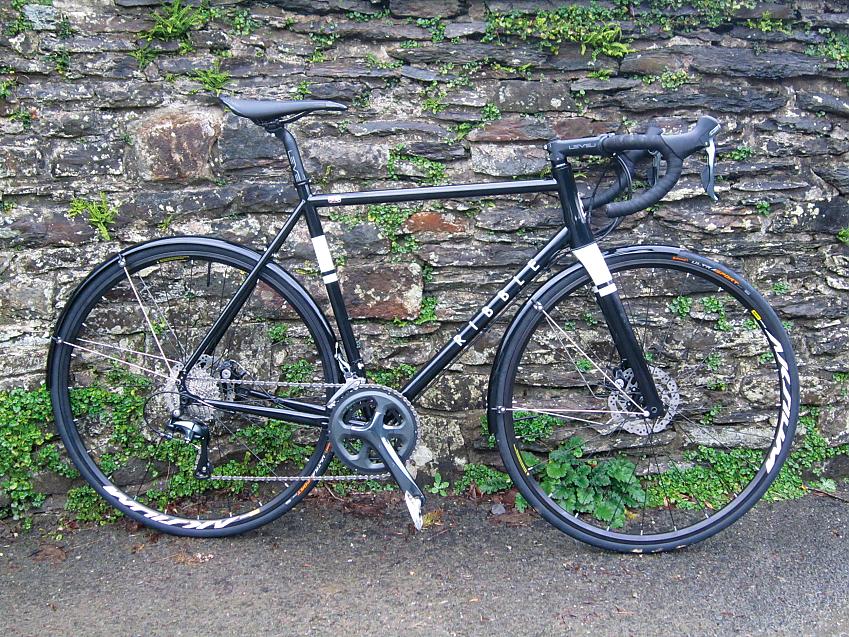 Visually, the Ribble impresses with its conical head tube, which accommodates a tapered fork steerer. The trouble with steel as a frame material is that it is easy to add weight, especially by using oversized parts such as that head tube.

While there’s no question that the Ribble offers the more pleasing ride sensation, one feature of its design simply cannot be ignored.

So too with the down tube’s internal gear cable entry port reinforcements and, indeed, the rear brake cable guides. This is a hefty bike; surprisingly so because its slender steel tubes give the Ribble a svelte appearance that’s enhanced by its understated colour scheme. Pick it up and the impression evaporates, although to its credit the machine feels lively enough on the road. It also lives up to the steel stereotype with a ride that feels supple and well-damped compared with the Tifosi’s, with tyres at identical pressures. Given this applies to the front end’s carbonfibre disc-mount fork, as well as the rear, some credit must go to the wheels. 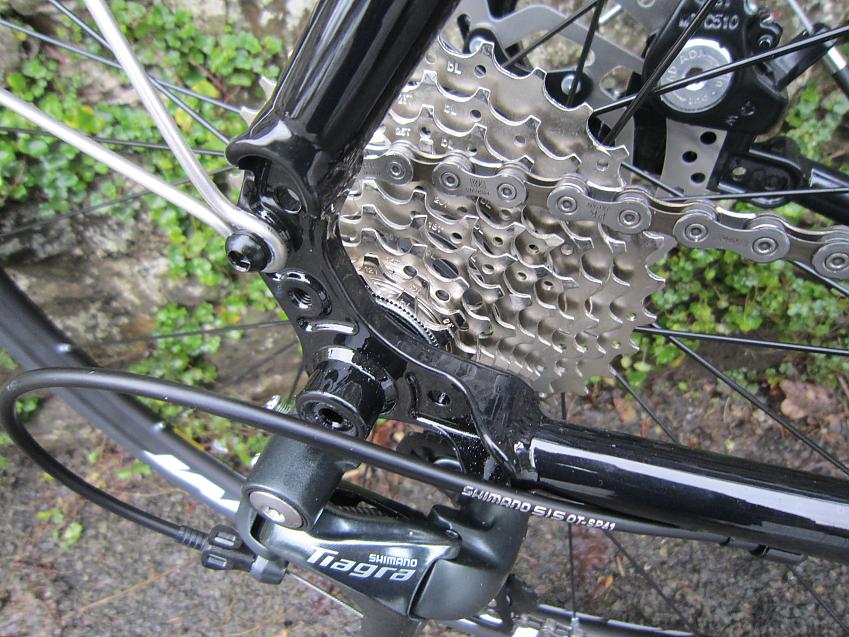 The Tiagra cassette goes to 32t, giving an easier climbing gear. An 11-34 cassette would work too

While there’s no question that the Ribble offers the more pleasing ride sensation, one feature of its design simply cannot be ignored. The left-hand rear frame end is, like its right-hand pair, designed to house the through-axle now deemed a vital part of disc brake technology. Both frame ‘ends’ are substantial pieces, apparently cast or forged, and undoubtedly heavy. The left-hand end is more extensive as it must support the rear disc calliper. It also provides the weld abutment for its chainstay, and this is offset to the outside, causing the stay to be splayed outwards. 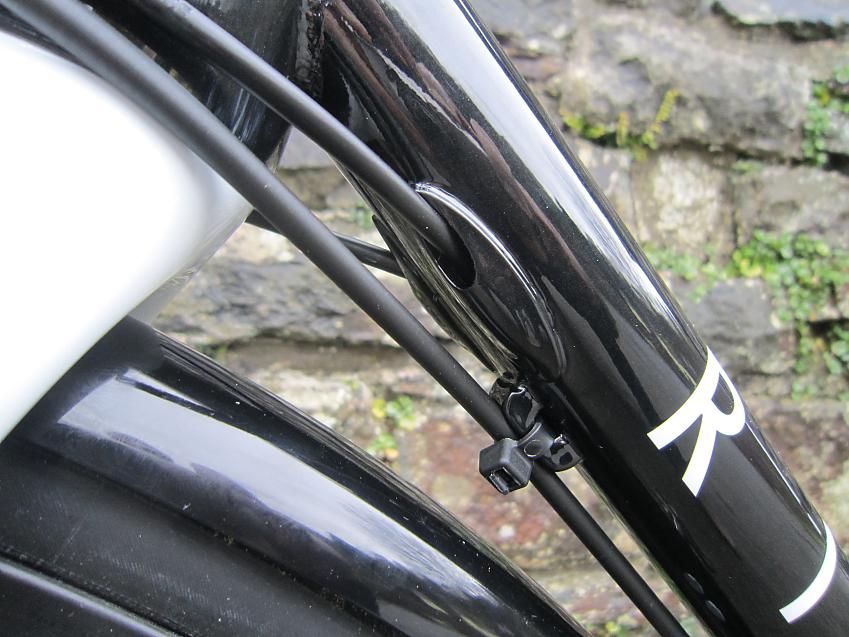 The result is that not only is the rear end asymmetrical, but the left-hand chainstay sticks out so far that my heel clipped it with every pedal stroke. This won’t affect every owner, but is well worth investigating prior to purchase. In any case, given the placing of the abutment beyond the edge of the brake disc, it would have been easy to make the offset inwards and avoid the problem entirely. 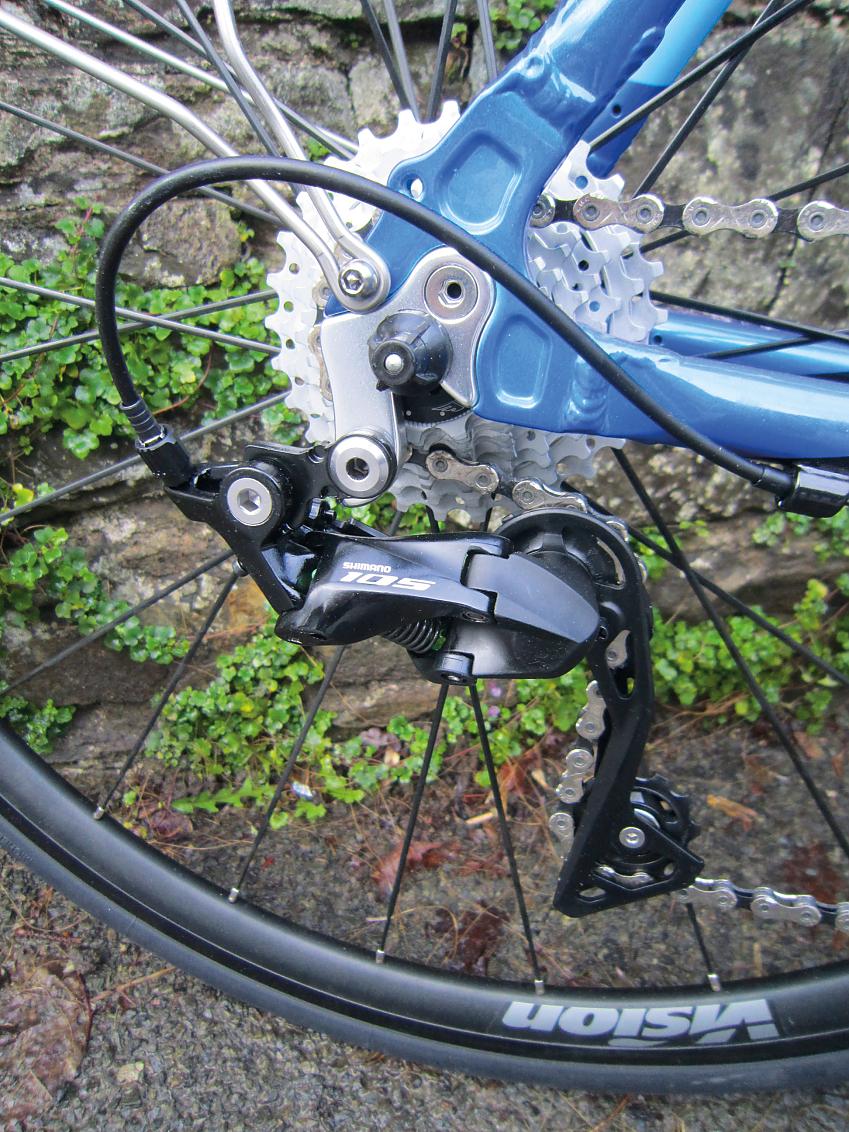 The Tektro cable-operated discs are lacking in power compared with the Tifosi’s rim brakes. On my local brake-test descent – moss-covered, dropping at 35%, and with a bend at the bottom – I had to squeeze hard all the way down, giving the rotors a nice straw colour as they heated up to 200°C. 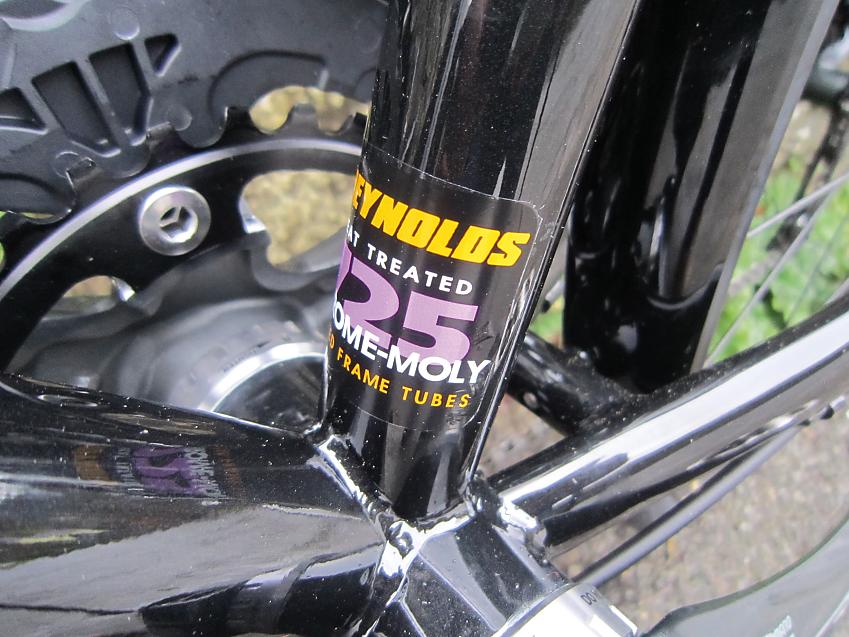 The frame is a nicer steel than you might expect: 725

The Ribble’s weight, heel clearance issue, and unimpressive braking stem largely from its use of disc brakes. Luckily there’s a rim braked version, which, if it shares the Disc’s fine handling and supple ride, should prove a distinctly superior machine – and, in Shimano Tiagra guise, at a price £100 lower. 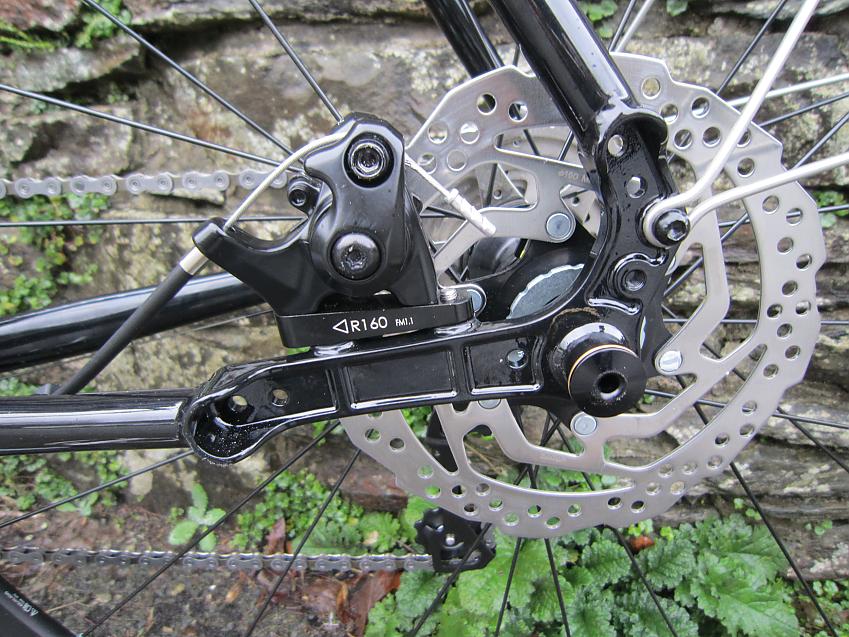 Some heels may clip this.

Both are competent four-season road bikes. The Tifosi is sturdy, stiff and surefooted. Its wide top tube will be an issue for some, while its wheels warrant eventual upgrading. The Ribble offers a more lively ride but is compromised by its budget discs and the way it accommodates them; the £899 rim-braked Endurance 725 would be the better buy. 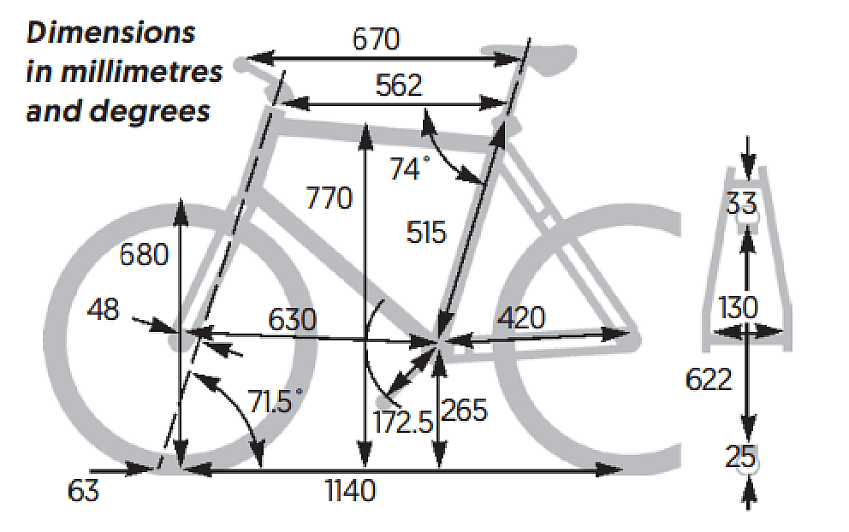 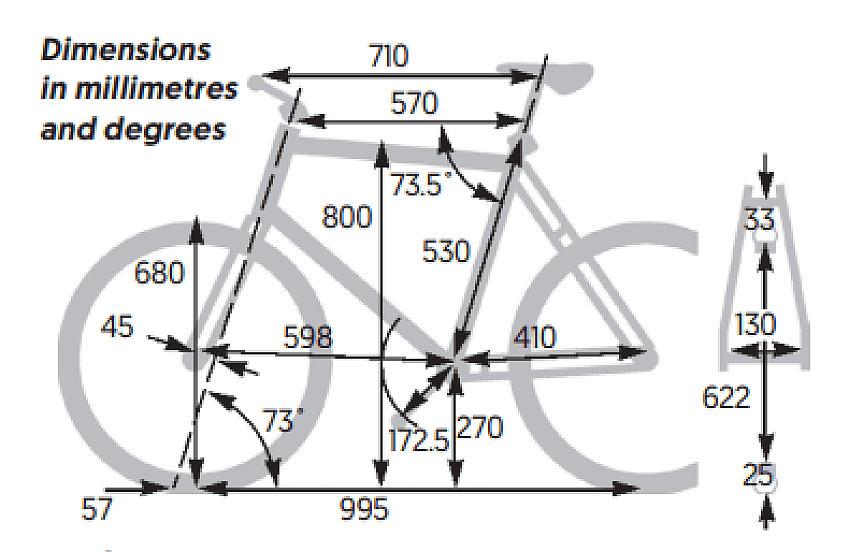 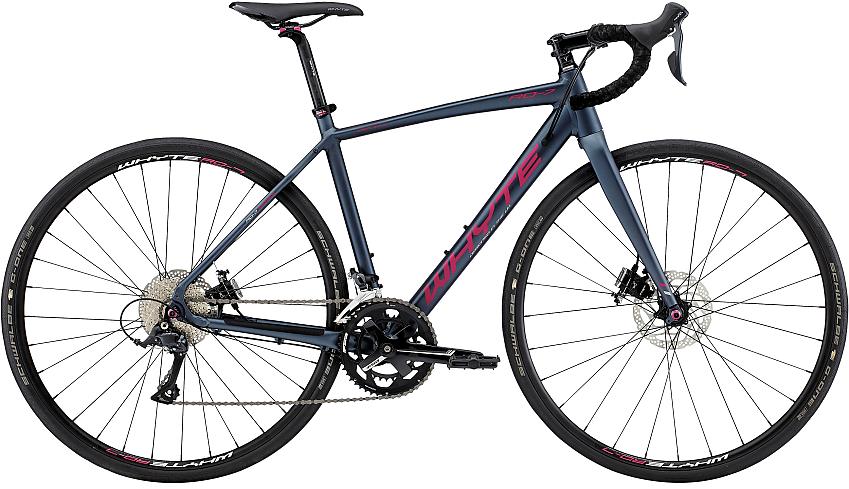